Some protesters used religion to settle a personal matter in Nankana Sahib. What are its implications amid India’s radical socio-political transformation from a secular state to a fascist Hindu regime? Will this incident shatter Pakistan's image in the world's view. 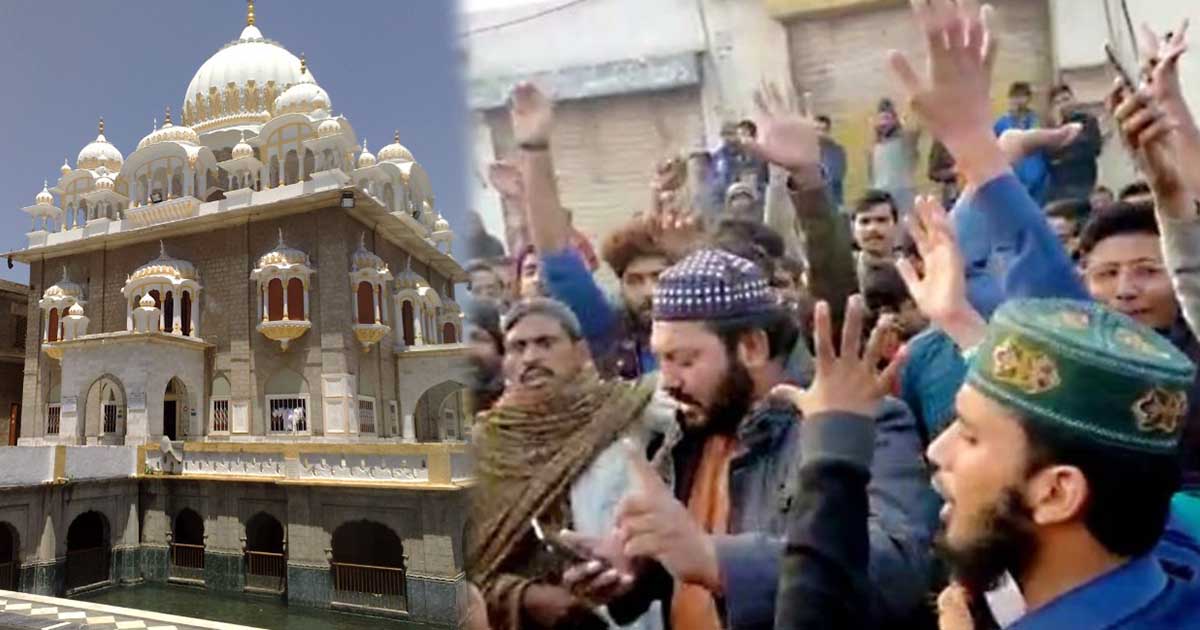 The mob, which attempted to attack Nankana Sahib Gurdwara, has been dispersed after the district administration intervened. A man, who was leading the protest, can be seen confirming that the matter has been resolved peacefully.

Evacuee Trust Property Board (ETPB) Chairman Amir Ameer said that there was no attack on the Gurdwara and no damage was caused to the holy site. “This is a law and order issue which was resolved by the police,” he said.

Gurdwara Nankana Sahib, also known as the Gurdwara Janam Asthan, is the site where the first Guru of the Sikhs, Guru Nanak, was born and is regarded as one of the holiest sites in the religion.

Analysts, members of civil society and political commentators are unanimously demanding proper investigation into the matter which led to an unfortunate incident. “This matter needs to be probed. It has caused huge damage to Pakistan and nobody should be spared for instigating common people against a religious minority,” said an analyst.

According to details, a mob, led by Muhammad Hassan’s brother, the boy who is accused of forcing a Sikh girl to convert before marrying her, gheraoed the holy shine, leaving several devotees stranded inside and pelted stones. The videos which have surfaced from the incident show him saying that if the authorities did not stop the brutality he will not let any Sikh live in the city.

India took up the matter

India took up the matter within no time and demanded the government to ensure the safety of the Sikh community in Pakistan. “We call upon the Government of Pakistan to take immediate steps to ensure the safety, security, and wellbeing of the members of the Sikh community. Strong action must be taken against the miscreants who indulged in the desecration of the holy Gurudwara and attacked members of the minority Sikh community,” said the press statement issued by the Ministry of External Affairs.

Chief Minister of Indian Punjab also urged the premier to immediately intervene into the matter.

Appeal to @ImranKhanPTI to immediately intervene to ensure that the devotees stranded in Gurdwara Nankana Sahib are rescued and the historic Gurdwara is saved from the angry mob surrounding it.https://t.co/Cpmfn1T8ss

India has always been attempting to equate a matter of individuals with systematic cases of violence to mislead the world, say commentators. The most recent example is of two Hindu girls who converted to Islam but Indian media started a campaign against Pakistan.

The Islamabad High Court (IHC) ruled that two Hindu sisters from Sindh province, who were allegedly abducted and forced to marry Muslim men, voluntarily converted to Islam. The court also stated the women, Nadia, 18, and Asia, 19, who were formerly known as Reena and Raveena, respectively, are adults and free to make informed decisions for themselves according to Pakistani law.

The ruling came as the result of an investigation by a five-member commission that was formed after the women filed a petition to seek protection from their family. The sisters claimed they had been harassed and threatened for converting to Islam and marrying Muslim men.

“This was a sensitive matter, and we have investigated it thoroughly. I have personally met with the girls and their husbands, and it doesn’t seem the girls were abducted or forcibly converted,” Khawar Mumtaz, chairperson of National Commission on the Status of Women and a member of the newly formed commission, told the court, as reported by the local newspaper, Express Tribune.

Violence against Muslims in India

Muslims in India are facing relentless violence and oppression. There have been several reports suggesting a systematic genocide of the Muslim community in India. In a long essay, prominent Indian writer Arundhati Roy explained how India, its media and intelligentsia are being controlled by Hindu extremists who want total control of the state to send Muslims to “graveyard or Pakistan”.

It is worth noting that the Indian Supreme Court has recently decided on the controversial case of Babri Masjid. The court in 1, 045 page-long verdict took a strong position and awarded the disputed site to Hindus for the construction of a temple under the watch of a Trust. The Trust shall be managed by the Central government, the verdict states.

Babri Mosque was built by Emperor Zaheer ud din Muhammad Babur, founder of the Mughal dynasty that ruled Indian for almost one hundred and fifty years. An idol was placed in the mosque in 1949 by the Hindu extremists who claimed it to be the birthplace of Lord Ram. In the 1980s, Rashtriya Swayamsevak Sangh (RSS), the parent organization of the ruling party of India, the Bharatiya Janata Party (BJP), announced to build a temple after destroying the mosque.

Finally, on December 6, 1992, a frenzied mob of thousands of Hindu extremists including several leaders attacked the mosque and destroyed it. The riots and protests claimed the lives of over 2,000 people. The case regarding the destruction of the mosque is still pending before the Indian courts. In the present case, although the act of political vandalism has been termed as illegal by the Indian SC yet criminal justice system of India is unable to convict the perpetrators.

You were part of the mob that destroyed babri mosque in 1992. Now preaching false tolerance as your “honorable” courts sanctify your vandalism. https://t.co/xs6loKL7qk pic.twitter.com/CTSj7V3i8C— M Junaid (@mjunaidr) November 9, 2019

Apart from the recent opening of Kartarpur corridor, Shaheed Ganj Gurdwara) in Lahore is the greatest reminder of the fact that Sikhs in Pakistan enjoy complete religious freedom. Constructed by Kotwal (Chief Police Officer) of Lahore Abdullah Khan, the cook of the emperor’s eldest son, during the reign of Mughal Emperor Shah Jahan in 1653, Shaheed Ganj was a mosque till 1799, till Sikh Army under Maharaja Ranjit Singh captured the city defeating Afghans. They converted it into a gurdwara and barred entry of Muslims.

In 1849, when the British took control of Lahore by defeating the Sikh Empire, Muslims pleaded for the return of the mosque and knocked on the court. But the court using the law of limitations rejected the plea and questioned the delay of 51 years for claiming the mosque. The London-based Privy Council, the highest court of appeal during the British era also rejected Muslim claim on May 2, 1940.

Read more: Dissension on PM Modi within India increase after assault on students

“Only a few Sikhs were left in the surroundings of Gurdwara, following a huge Sikh exodus in 1947. If the local community had insisted its conversion into a mosque, nobody would have stopped them”, said a Sikh.

It is important to note that the number of Sikhs in Pakistan is estimated between 30,000-40,000 out of some 200 million population of this South Asian Muslim country.