Will India get any relief from the ICJ? 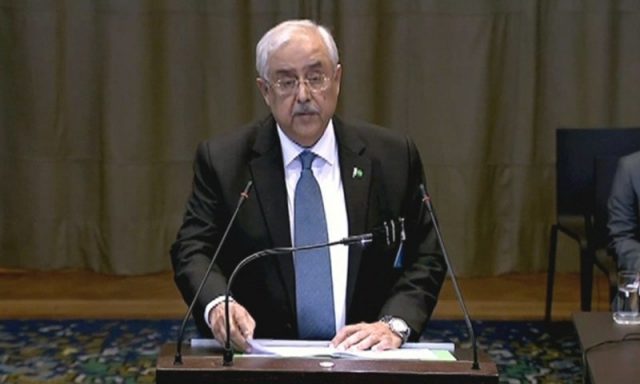 Pakistan has once again made it clear that Indian demands to release or return its spy Kulbhushan Jadhav are ‘childish’. Information Minister Fawad Chaudhry on Wednesday addressed the issue of Indian spy and an ongoing case before the International Court of Justice (ICJ). Commenting on the arguments furnished by the Indian legal counsel before the court, Fawad Chaudhary said, “These are nothing but childish pleas. And, like Khawar Qureshi [Pakistan’s counsel] said yesterday: India is perched precariously on a flimsy wall of lies.”

On Wednesday in a press conference, Mr. Chaudhary asked why Indian media is not interested to answer some very important questions posed by Pakistan. The first of these was a clarification sought over the retirement of Jadhav.

“When did Kulbhushan Jadhav actually retire? If he retired at the age of 47, then you must show us a record of the same and explain why he retired before the usual age of retirement,” demanded Chaudhry.

The fact of the matter is that India tried to establish before the ICJ that a verdict given by a military court cannot be challenged before any High Court or the top court of the country.

The second question pertains to the spy’s passport, found by British investigators to be authentic. “British investigators have confirmed that the passport in his possession is authentic. So the second question posed by Islamabad’s counsel was that why was Jadhav found to have an authentic Indian passport when he was arrested? Of course, an authentic Indian passport could not have been provided by us; he must have had it made from India,” he said.

Thirdly, Federal Minister asked if India ever took up the matter with Iran? Is there any evidence? Why did India remain silent?

The Minister lamented that the Indian side has failed to address any particular question and relied on some fabricated pieces of information to malign Pakistan. Federal Minister also maintained that Prime Minister Modi wanted to contest the general election by using Pakistan card which is ‘sad’ for a democracy like India.

Read more: India could not answer many questions in ICJ about Kulbhushan Case

Dr. Moeed Pirzada, Pakistan’s prominent analyst and political commentator who also hosts his own talk show at GNN, “Live with Moeed Pirzada”, is now a days in Hague and covering the case proceedings. Dr. Pirzada believes that Indian legal experts knew the fact that their case was on weak grounds and could easily be disposed of. But due to its international outreach and its influence in the international system, India had an idea that it will get some relief by the ICJ. But Pakistan’s legal counsel presented its case with the help of PowerPoint presentation and convinced the court that what India is demanding from the ICJ has never happened before and is not legally possible. “

Experts in Pakistan also believe that it is not within the jurisdiction of the ICJ to release or pass an order to return a spy to India. What the ICJ can do for India is to ask Pakistan to give a right to appeal to commander Yadav against his conviction which is already available. The fact of the matter is that India tried to establish before the ICJ that a verdict given by a military court cannot be challenged before any High Court or the top court of the country. Khawar Qureshi explained before the court that it was misleading since High Court have turned down many decisions given by the military courts.

Analysts maintain that Indian case is on weak grounds and the ICJ is not in a position to give any expected relief to it.