Will peace in Afghanistan bring back “Dark age” for media?

War-torn Afghanistan has seen a revival of media, art, and culture after American forces took over but as the troops withdrew journalists and other members of media family are plagued with worry about their future as Taliban will usher in a new era of media strict reforms like before. Media freedom still remains a huge question in Afghan setup. 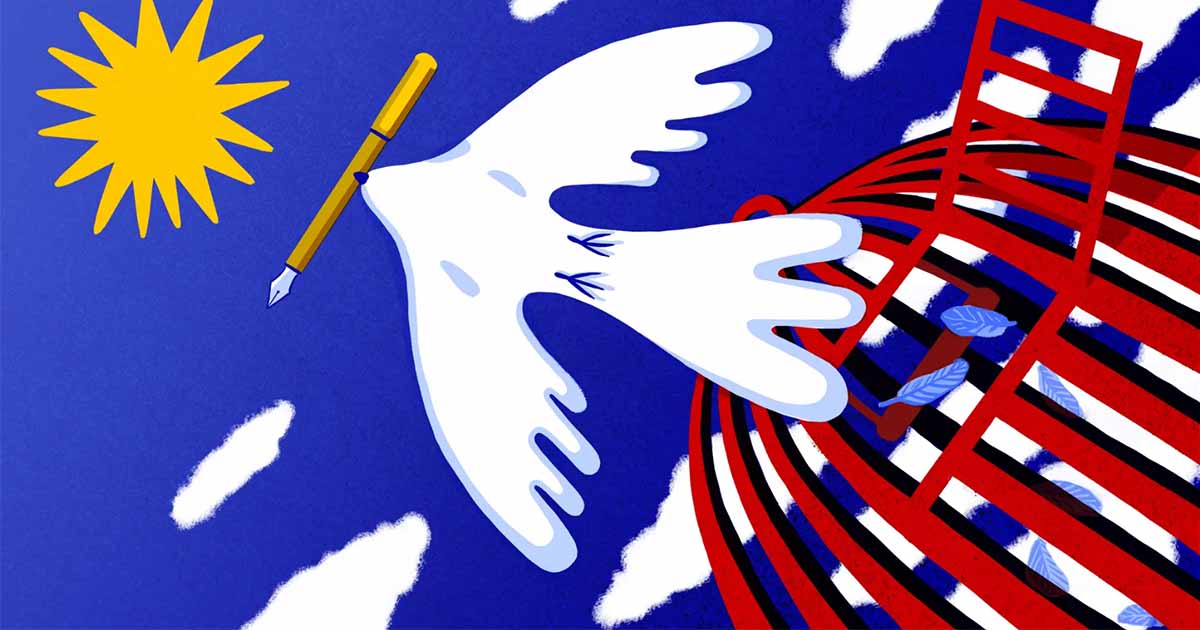 Set in Afghanistan, beneath the gaze of the TV cameras, a woman begins speaking, at first softly but with growing passion as she faces the “Butcher of Kabul” across a crowded auditorium and asks if he wants to apologize for alleged war crimes. Without missing a beat, Gulbuddin Hekmatyar, the ruthless former warlord blamed for rocket attacks which reduced much of the Afghan capital to rubble in the 1990s, declined to do so.

The dramatic moment during a recent televised news debate highlights how far media freedom has come in Afghanistan, where – for now – traumatized civilians can stand and at least try to hold powerful men to account, live on camera.

“Years ago, this kind of questions could get you killed, but now people can challenge the most dangerous people in mainstream and social media,” Mustafa Rahimi, a university student, said after watching the debate.

But today, even as hundreds of media outlets proliferate across Afghanistan, consumers and journalists alike worry a potential peace deal between the Taliban and the US could sound the death knell for a golden age of press freedom. “We are concerned about a total or a partial ban on media,” Sediqullah Khaliq, the director of Hewad TV and radio in Kandahar – the birthplace of Taliban – told AFP.

If Taliban return to power, the insurgents would follow an Islamic interpretation of freedom of expression. “We won’t allow propaganda, insults and humiliation to people in society and religious values. We will allow those who work for the betterment of the society

“There is fear that we may go back to a media blackout or having a state-controlled press.” While in power, the Taliban raged against traditional forms of mass communication and entertainment, banning television, movies and allowing only Islamist programming or propaganda to be broadcast on the only radio station, Voice of Sharia.

Anyone caught watching TV faced punishment and risked having their television set smashed and then displayed from a lamppost. Almost all electronic products were outlawed as un-Islamic. For a while, trees in Kabul fluttered with the magnetic ribbon tape from destroyed cassettes.

Photographs of living things were illegal, and ownership of a video player could lead to a public lashing.

Afghanistan is the world’s deadliest place for journalists, who face many risks covering the conflict and who have sometimes been targeted for doing their job. Nine journalists, including AFP Kabul’s chief photographer Shah Marai, were killed in an Islamic State attack in April 2018.

Media watchdog group Reporters Without Borders (RSF) reported that 2018 was the deadliest year on record for journalists in Afghanistan, with at least 15 media workers killed while working.

Despite the risks, hundreds of media organizations have blossomed since 2001, and today there are more than 100 television channels, 284 radio stations and just over 400 newspapers and magazines, according to a government report.

With one of the world’s lowest literacy rates, television and radio play a huge role in Afghan culture, and Afghans have grown accustomed to outlets holding their politicians to account. Warlords, politicians, Taliban sympathizers and government officials are openly challenged in televised debates, radio programs and on social media.

“We now play live music, women call in and share their problems on the radio. But even if the Taliban allow radios, I don’t think they would like our programs,” said Mera Hamdam, a presenter at Zama private radio in Kandahar. “There is a huge concern that we will lose all our achievements,” he said.

Taliban spokesman Zabihullah Mujahid said if they return to power, the insurgents would follow an Islamic interpretation of freedom of expression. “We won’t allow propaganda, insults and humiliation to people in society and religious values. We will allow those who work for the betterment of the society,” he told AFP.

The sixth round of talks between the US and the Taliban wrapped up last week in Doha, with apparently little progress being made on several key issues. The two foes have for months been trying to hammer out a deal that could see foreign forces leave Afghanistan in return for a ceasefire, talks between Kabul and the Taliban, and a guarantee the country will not be used as a safe haven for terror groups.

But observers worry that in a rush to quit Afghanistan after nearly 18 grueling years of war, America might not push for safeguards of protections many Afghans now take for granted, including media freedoms and improved rights for women and other marginalized people.

“Freedom of expression as a protective value should be incorporated into any document resulting from peace talks,” NAI, a leading media support agency, said in a statement. Rahimi, the university student, said he worried about Afghanistan going back to “the dark era”.