Will US dump India over its atrocious treatment of minorities?

What does recommendation of US commission on religious freedom to backlist India mean? Will US put sanctions on India? Andrew Korybko has upsetting news for Pakistan. 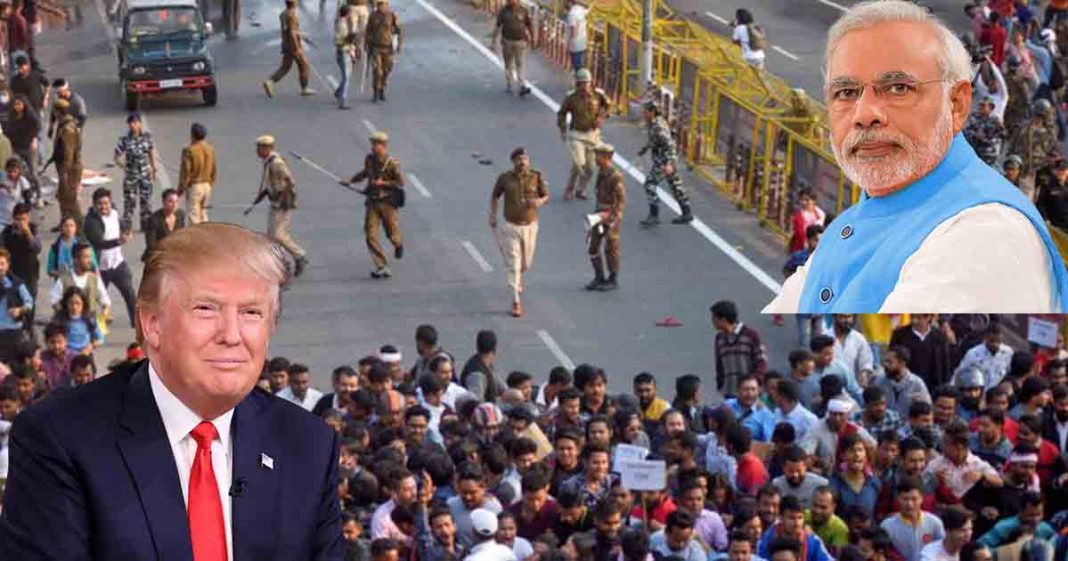 There’s been a lot of speculation that the US might be preparing to dump India over its atrocious treatment of minorities after the official White House Twitter account stopped following several Indian government ones including Prime Minister Modi’s and the United States Commission on International Religious Freedom recommended blacklisting the South Asian state, but that scenario is extremely unlikely since America envisages its new junior partner functioning as a long-term counterweight to China in both the military and economic domains, which certainly takes strategic precedence over punishing the country for its human rights abuses.

“Wishful thinkers” all across the internet presented this as supposed proof that America might be preparing to dump India over its atrocious treatment of minorities, but that scenario is extremely unlikely since America envisages its new junior partner functioning as a long-term counterweight to China in both the military and economic domains.

The Twitter incident was nothing more than media-driven drama after India’s Ministry of External Affairs confirmed that it’s protocol for the White House Twitter account to briefly follow some official accounts of the countries that Trump visits in order to share their content on that platform, though the USCIRF issue is admittedly a bit more complex and deserves a thorough explanation.

Helping India, Not Harming It

It’s true that the optics of a US government panel recommending the blacklisting of the country’s new military-strategic partner are unflattering and seemingly suggest that Washington is taking New Delhi’s human rights abuses against its Muslim minority (including the population of Indian-Occupied Kashmir) very seriously, but that doesn’t tell the full story.

This proves that the US isn’t about to dump India like some speculated, but is strengthening its strategic ties with it, especially economically

First off, the US government isn’t a monolithic mass in which each constituent unit perfectly coordinates with the other under the orders of some central authority (e.g. the President), but a gargantuan mess of oftentimes conflicting interests as proven by its ongoing “deep state” struggle between rival factions of its permanent military, intelligence, and diplomatic bureaucracies.

Even with the possibility that an antagonistic faction of the “deep state” is trying to subvert the “comprehensive global strategic partnership” that Trump clinched with Modi during his first-ever official trip to the country last February, then such a move might ironically be counterproductive since it arguably helps their relationship more than it harms it.

No objective observer would deny that India’s domestic fault lines are worse than they’ve ever been before, especially since “India’s Waging A State-On-Citizen Hybrid War To Build Modi’s Hindu Rashtra”. This asymmetrical war against one’s own people has directly led to the phenomenon of so-called “Modi Migrants”, the millions of day laborers (many of whom are Muslim) being forced to flee the cities that they migrated to in order to return to their rural hometowns in a desperate attempt to make ends meet after they could no longer make a living during the country’s clumsily decreed lockdown.

In addition, “Hindu Extremists Ridiculously Believe That Muslims Are Responsible For World War C”, with even influential ruling party ideologues blaming this minority for supposedly spreading the coronavirus throughout the country. All of these factors have combined to create the “perfect storm” threatening India’s stability, and by extrapolation, the US’ long-term strategic interests in using the South Asian state as a counterweight against China.

It, therefore, follows that it’s in America’s enduring interests to ensure that India ceases its Hybrid War on Muslims and other minorities (including Christians, Hindu Dalits, and the native people of the Northeastern “Seven Sisters”, among many others) so as to guarantee the viability of its envisaged century-long partnership with India that former Secretary of State Rex Tillerson spoke about in October 2017 and which the author analyzed in an article at the time titled “The Blueprint For The 100-Year-Long US-Indian Strategic Partnership”.

With this in mind, one can therefore interpret the USCIRF’s blacklisting recommendation as a “gentle reminder” that India needs to reverse its discriminatory policies against minorities otherwise it risks everything that both governments are trying to build with one another vis-a-vis “containing” China, both in the military domain and also the economic one via their shared “economic nationalist” policies aimed at restructuring global supply chains away from the People’s Republic after World War C inevitably ends.

The Role Of “Economic Nationalism”

The author explained Trump’s vision of the post-World War C economic order in his recent piece about how “Trump’s COVID-19 Piracy Is A Revolutionary Act Of Economic Nationalism vs. Globalization”, after which he expanded upon this concept by analyzing its relevance to India in a follow-up piece about how “India’s Selective Embrace Of Economic Nationalism Has Anti-Chinese Motivations”.

The insight shared in these pieces isn’t the author’s subjective theorizing, but his objective observations that were vindicated in the middle of last week during the height of speculation about the future of the US-Indian Strategic Partnership after Secretary of State Pompeo told a media conference that the two countries are actively working with one another and their Quad+ partners (Australia and Japan being the other two original members, with New Zealand, South Korea, and Vietnam being the three additional ones) to “restructure global supply chains”. This proves that the US isn’t about to dump India like some speculated, but is strengthening its strategic ties with it, especially economically.

While some might “wishfully” want to see serious strains emerging in the US-Indian Strategic Partnership, the reality is that no such scenario is unfolding. The supposed proof that’s presented in support of that observation is discredited by the fact that it’s protocol for the White House Twitter to only temporarily follow several official government accounts in the countries that Trump’s visiting, meaning that unfollowing the three Indian ones like it did earlier this week isn’t a sign of any developing disagreements between the two.

Furthermore, the USCIRF’s recommendation to put India on a religious blacklist for its atrocious treatment of minorities (especially its Muslim one and including the people of Indian-Occupied Kashmir) doesn’t imply impending sanctions or any other meaningful pressure of the sort but is simply a “gentle reminder” that the country’s self-inflicted domestic destabilization endangers the viability of their shared strategic goals vis-a-vis China which drive their present partnership. Therefore, far from weakening, US-Indian ties continue to improve by the week.

Previous articlePandemic slows down? Europe braces up for lockdown ease
Next articleWho is behind Dr Firdous Ashiq Awan’s removal?

21 September 2021
Previous articlePandemic slows down? Europe braces up for lockdown ease
Next articleWho is behind Dr Firdous Ashiq Awan’s removal?