Zakat for Nawaz Sharif, save our qoumi hero: Posters popped up in London

Nawaz Sharif flew from Pakistan on health grounds but the disgruntled Pakistani diaspora awaits the Sharif family in the UK, where suddenly upon landing he became fit as a fiddle. 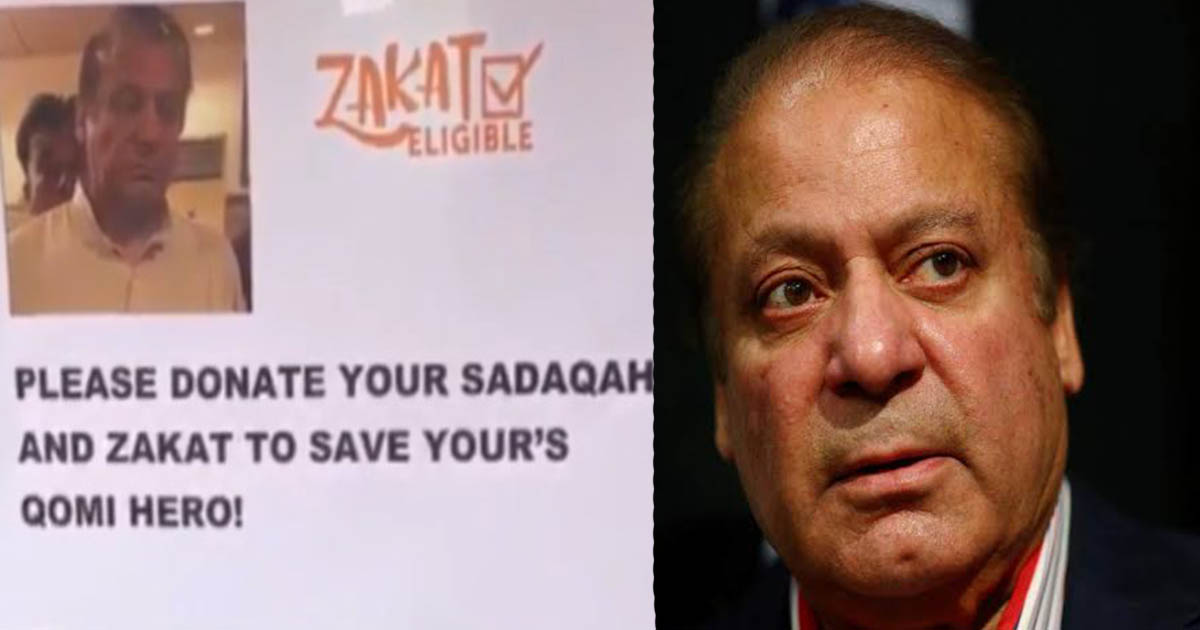 Several posters popped up on the streets and shops of East London appealing for the donations for the treatment of ailing former premier Nawaz Sharif. Perhaps a satirical poster, it takes a dig on the leader of former ruling party PML-N, Nawaz Sharif, who flew to London on medical grounds.

The posters appeal to people to donate their money in the form of ‘Zakat‘ to save the national hero Nawaz Sharif. The posters, however, seems to be an attempt by Pakistani diaspora to shame the uber-rich Sharif family, who owns expansive and luxurious Avenfield Apartments in the UK.

In East London a poster put up in shop is asking people to donate Sadqa and zakat to their leader Nawaz Sharif. Seriously! Hoping it’s British sense of humor. 😐 😳😳😳😂 pic.twitter.com/2HsYV4Ywmf

Pakistanis, local and abroad, are annoyed by Nawaz Sharif traveling abroad for treatment in the UK. People believe that he escaped his imprisonment in Kot Lakhpat jail on the pretext of contracting a life-threatening disease, which, according to PML-N is untreatable in Pakistan.

Social media was in the furor over the suspension of his sentence, moreover, they demonstrated bewilderment over setting a new precedent in Pakistan of granting a convicted prisoner bail on medical grounds and even rescinding objections on his travel abroad for an exclusive treatment in the UK.

Earlier, Nawaz Sharif was granted temporary bail for eight weeks from Islamabad High Court on health grounds. Unsatisfied with the treatment in Pakistan, PML-N had pressed the state authorities to allow Nawaz Sharif to travel abroad for treatment.

I thought #NawazSharif was seriously ill?? I think the court has been misled pic.twitter.com/GvjBZ9eMGK

So, Nawaz Sharif did not go to the hospital after taking an air ambulance?

Moreover, the recent images and videos of Nawaz Sharif have hit the internet, which has baffled the government legislatures and people alike. It challenged the narrative of PML-N built on Nawaz Sharif’s health on multiple levels.

First, the inside image of Mian Nawaz Sharif dressed in a three-piece suite, from the aircraft of Qatar’s royal family, raised suspicions on Shahbaz Sharif’s assertions that Nawaz Sharif will be taken to London in a multi-facility, air ambulance.

Aspects like Nawaz Sharif walking into the plane; sitting on a comfortable seat; enjoying grapes and the air hostess serving drinks instead of a nurse, heightened public concerns.

The social media user said they expected Nawaz Sharif to be taken in a wheelchair owing to the impression built around his health.

What an Inspirational Tale 😍

By looking at this, I am more worried about the support he has left behind.
If this is how the leaders will set examples then imagine what mindset will supporters have?

These Sharif and Bhuttos have ruined our youth.
They cant distinguish between wrong and right.#NawazShareef pic.twitter.com/zoTo6qYwjz

The videos also show Nawaz Sharif embracing his family members and close aide in London outside his apartments. These images have forced people on the discernment of state institutions and the federal government’s decision to allow him to travel abroad on health grounds.

Previous article“I’d rather die in the way of God than change my route”: Hamza Ali Abbasi
Next articleAltaf appeasing India: Modi, savior of Kashmiri daughters, grant me political asylum

16 September 2021
Previous article“I’d rather die in the way of God than change my route”: Hamza Ali Abbasi
Next articleAltaf appeasing India: Modi, savior of Kashmiri daughters, grant me political asylum

Azadi March shall be carried out at any cost, says Maulana