GVS takes a look at an alluring exhibition of a Karachi-based artist, Shakil Saigol, at the Tanzara Gallery in Islamabad. The ‘Abhinaya’ series is a strong and definitive body of work that transcends boundaries.

Over the past three decades, Shakil Saigol has emerged as a uniquely placed personality on the art scene in Pakistan. His career presents numerous problems. Born in Calcutta, raised in Lahore, lived in Rawalpindi and settled in Karachi – Shakil’s life spans the geographical spread of the northern subcontinent in ways that artists can barely imagine.

His canvas stretches from the nomadic heartland of Central Asia through the Mughal mosques and tombs of Lahore and Thatta, towards the intricate stone temples of Ajanta and Ellora, reaching an apex at the temples of Khajuraho and Mahabalipuram. 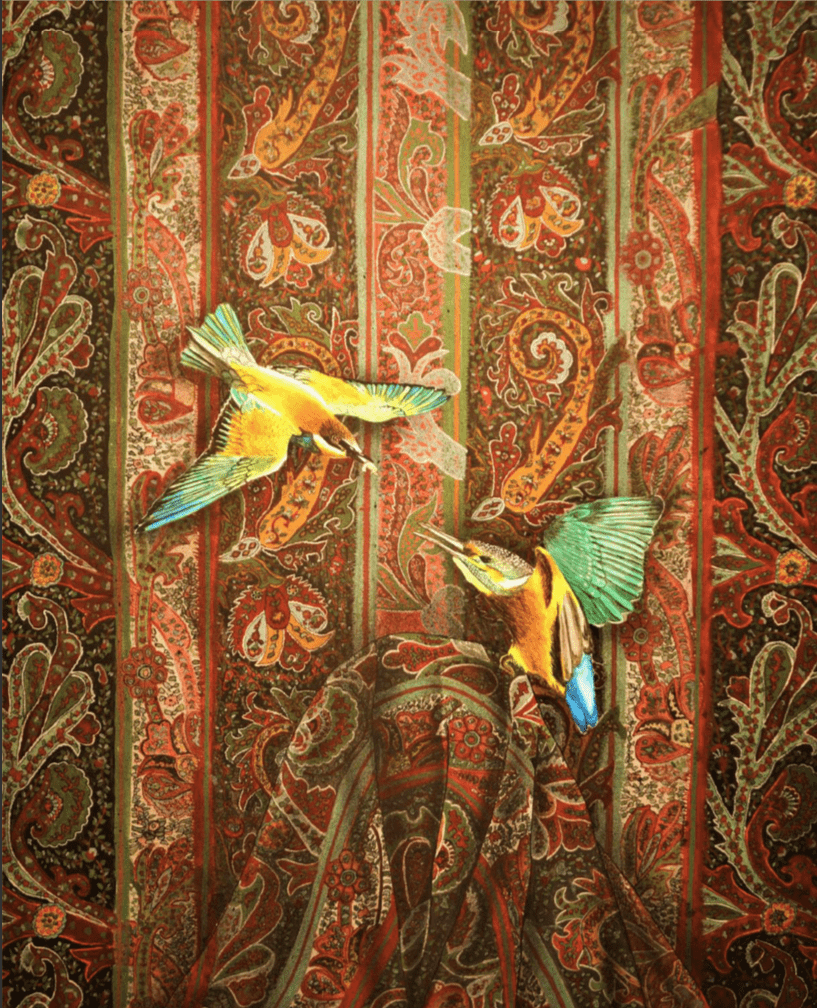 He lovingly accesses art and material culture from the tenth to the nineteenth centuries, dwelling on the pigmentations of sculptural stone in temples –the rich maroons, browns and ochre and Kashan pinks, creamy whites, burnished orange, radiant greens– to the glowing abrash pigmentations of rose madder and indigo blue in textiles and rugs spanning the Nomadic, Muslim and Hindu traditions of Central and South Asia – The range of his artistic palette is vast but he largely confines himself to a field of vegetable and mineral pigmentation utilized by artists and craftsmen in the pre-modern period.

There is little evidence of the electronic eye-catching colors which infiltrate contemporary South Asian art. Instead his aesthetics reference a world bygone, which brings to his work a vitality that has led art critics in Pakistan to erroneously categorize him as a ‘contemporary’ artist which Shakil Saigol definitely isn’t. 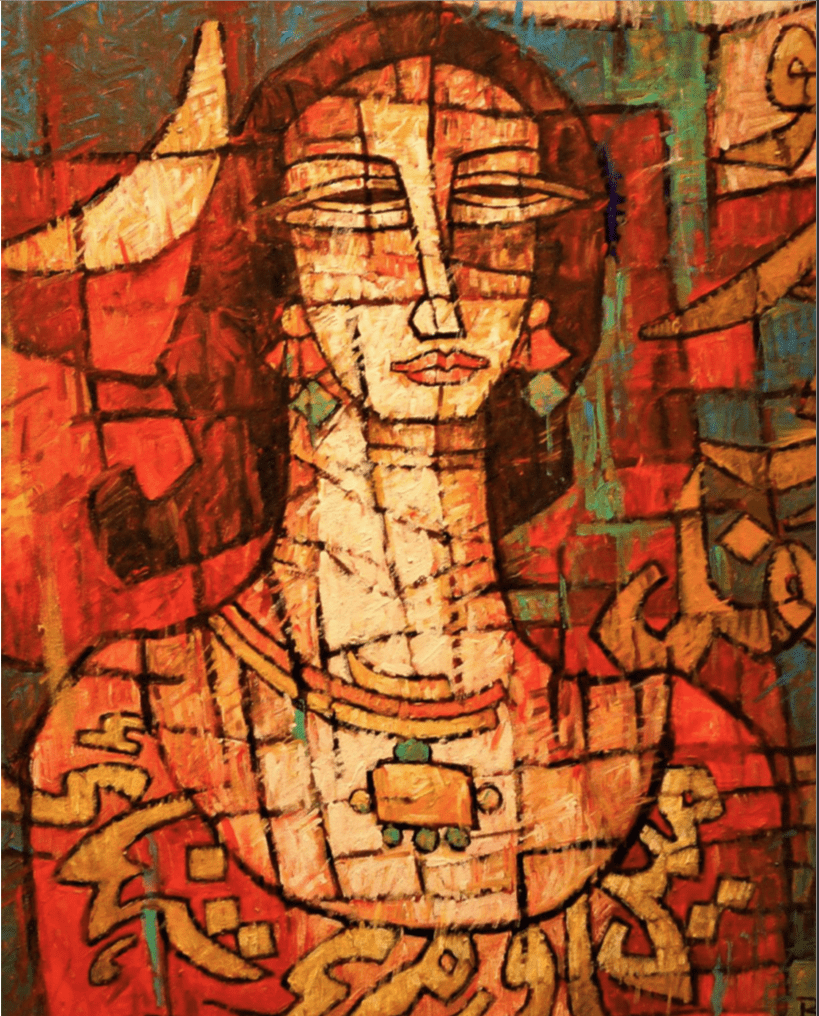 To try and place him in the pantheon of Pakistani art, one would have to relegate to him the position of an artist who endeavors to combine elements of twentieth-century portraiture – sometimes imbued with an element of photorealism – with an intricate nineteenth-century colonial style that was used for documentation of textiles and handicrafts.

A magical variant of the Crystal Palace Great Exhibition in nineteenth-century London,  re-emerging as a new face of late-twentieth-century art in Pakistan.

Now in his mature years comes the Abhinaya series. The title of the exhibition reads: An Alphabet of Anguish and Ecstasy. But why Abhinaya? Is Shakil veering towards Sanskritized concepts of philosophy that were fashionable in art circles prior to 1947?

Is there any linkage of Saigol’s art to the output of Atiya Faizi? Faizi along with Samuel Binyamin – subsequently renamed Faizi Rahamin – moved to Karachi at Mr.Jinnah’s request from their Malabar Hills residence and set up the Gosha-e-Adab in Karachi to house their collection on sub-continental dance, Indian textiles and portraits by Faizi in the tradition of his teacher, John Singer Sargent.

Shakil’s artistic references clearly reach out towards such pre-occupations, but his take on such references is individual and distinctive. He combines them into his works, setting up a new framework of reference by which such objects and activities become the lifeblood of his artistic oeuvre.

Abhinaya to Shakil Saigol is not really a question of when but what? Abhinaya is a corpus of emotions stylized in South Asian dance forms that display a range of expressions and emotions associated with the human condition: expectancy, elegance and despair.

Saigol’s definition of Abhinaya extends further to the psychological and philosophical human condition, where Abhinaya is used to express an encapsulation of surrealistic psychological states, the ego, and the self-emerge as powerful metaphors to embellish an alphabet of emotions in this mature phase of his work.

The thirteen works in the exhibition lovingly explore the various forms of abhinaya. Seven works depict the Raagmala of musical compositions,  reflected in classical, temple and court dance forms going back several centuries.

There are further two canvases in the Raagmala, devoted to the dance form of Kathak – Raag Bageshwari which reflects Lokadharmi Abhinaya, or realistic and natural expressions of emotion from daily life; and Raag Khamaj which showcases the Natyadharmi Abhinaya similar to the earlier Shankara. 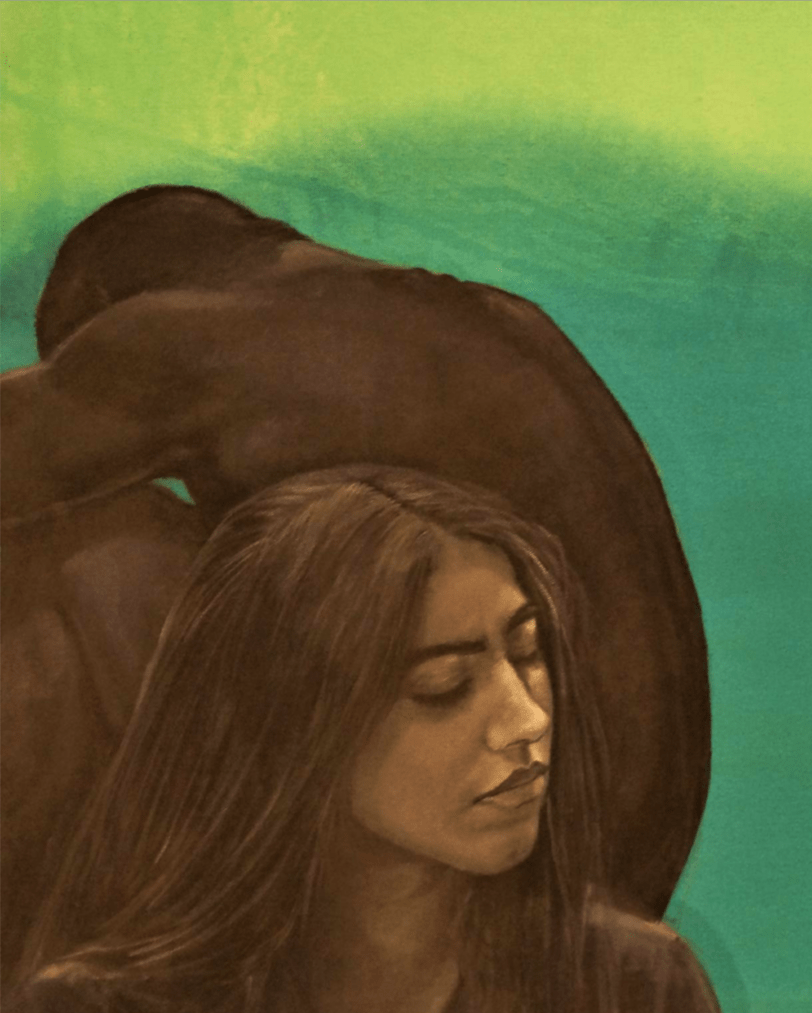 The remaining works in the exhibition can be placed firmly outside the Raagmala, but retain the theme of Abhinaya. Saigol falls back on expressing surreal states of mind in relation to himself in the Sattvika Abhinaya, or the philosophical, spiritual and psychological contours corresponding to the artist’s inner self.

Both “And they handcuffed the flowers” and “Sacred Conversation” are minutely crafted masterpieces, surrealistic in nature, with flying birds and even the artist’s own hands protruding into the foreground.

Shakil Saigol has not dealt casually with the concepts of Abhinaya. Being an aficionado of classical music and dance traditions in South Asia, he has appropriated a range of emotions contained within these art forms and extended them into visual metaphors in a way few artists have explored within his generation.

The canvases in Abhinaya are works of immense artistic integrity. Saigol is hopelessly trapped in this legacy, a prisoner within the walled anguish of his own aesthetic ecstasy.

“I cannot recall a time when I didn’t paint. As a child, I would recreate illustrations from magazines, paint flowers and leaves. In my adolescent years, I started sketching portraits of my classmates. The subject I enjoyed painting most was the human form, not so obvious to me then, I was clearly on my way to becoming a figurative artist.

Winters in Lahore were something we looked forward to. Getting away from our home in Pindi, 12 miles away from town, was joyous. Spending giddy days with umpteen cousins and nights at the annual Music Festival are among my happiest memories. Listening to Bade Ghulam Ali sahib, Roshan Ara Begum, the young Iqbal Bano and watching Indrani Rahman and Yamini Krishnamurthy dance! These were heady experiences to imbibe.

Later, I was to have the good fortune to see dancers like Sonal Mansingh, Uma Sharma, and the Reddys perform. In the 70s, the mother-daughter duo of Mrinalini and Mallika Sarabai came to stay with us. Watching Amma, as we called Mrinalini Ji, cook for us was to see a dance recital.

Dance has been a preoccupation in my work and I am unable to paint without listening to Kishori Amonkar or Bhimsen Joshi! Among my preoccupations is the saree in its various forms, just as the Kashmir shawls or Jamavars and other textiles such as kilms and carpets are recurrent elements.

In this body of work the Jamavar shawls provide a backdrop while surrealistic forms in the foreground are suggested. I am drawn to surrealistic work again as I was thirty years ago. To those critics of my art practice who object to the diversity of subjects that I paint I would say: the message may vary but the elements that run through the various series are consistent.

In painting the human form, textiles, foliage, sculpture my inclination towards Surrealism often emerges. I reiterate the influence that Dali, Rousseau and Hockney have wielded on my creative impulses. I would also say that there are innumerable unpainted images in my imagination. In my twilight years, I am impatient to put them on paper or canvas.”

‘Abhinaya’ is a strong and definitive body of work that transcends boundaries.  The artists’ rich aesthetic vocabulary evocatively combines traditional imagery with a powerful contemporary disposition. In this exhibition, the artist focuses on the myriad form of Abhinaya for inspiration.

Characterized by strong metaphors, imagery and intricately worked canvases, Saigol’s work exudes both boldness and fragility. It works like this, the artist captures fleeting emotions and ephemeral instances of his feelings with a lucidity that stems from his highly developed skill and technique.

In keeping with its tradition of offering quality art to its patrons, Tanzara Gallery is pleased to have the artist present with us for the opening of his exhibition.

Looking forward to seeing you all at the opening!