The PTI government plans to draw the attention of roughly 500 million Buddhists to Pakistan through developing a ‘Buddhist trail’ which will begin from Swabi, go towards Swat, and culminate at Taxila – the Kingdom of the Gandhara Civilization. GVS walks you through some of the major highlights. 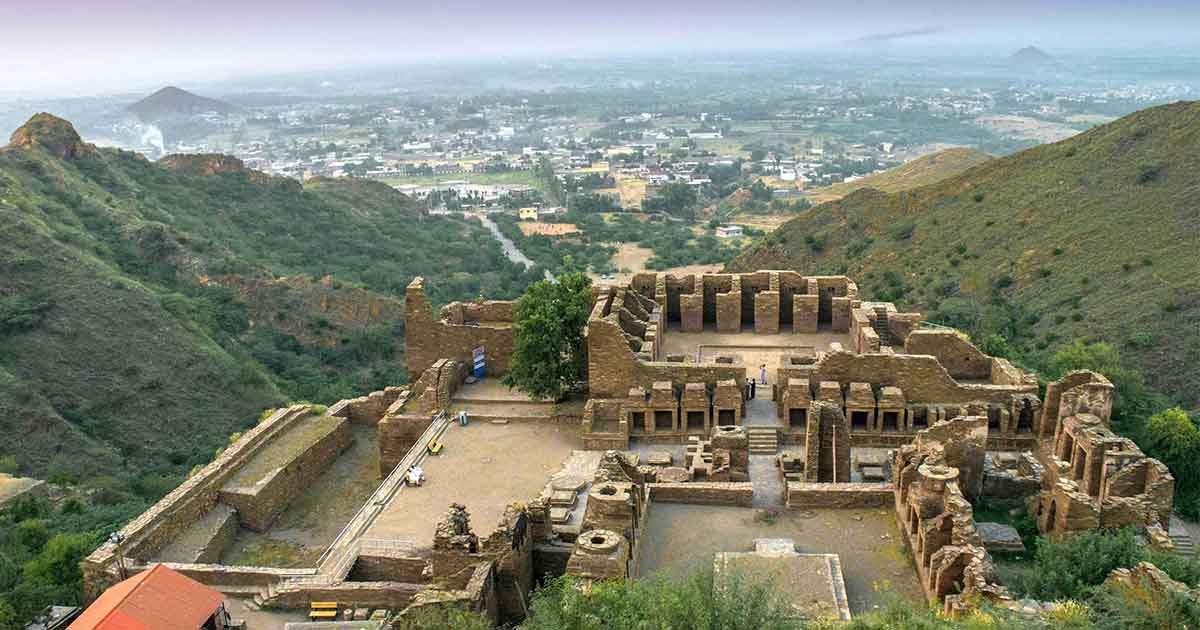 Pakistan is home to some of the most stunning vistas and extraordinary terrains across the globe. Simultaneously, it is also home to some of the most sacred sites for the believers of Islam, Hinduism, Buddhism, and Sikhism amongst other faiths. Sacred places of Buddhism are scattered all across Punjab, Khyber Pakhtunkhwa and Sindh in Pakistan, and the Pakistan Tehreek-e-Insaf (PTI)-led government is all set to market religious tourism.

While eying the ultimate target of projecting a soft pluralistic image of Pakistan internationally, and attracting Buddhists, from across the globe, specifically, PTI government has come up with a plan to develop a “Buddhist Trail” in Pakistan. The initiative is in line with the vision of Prime Minister Imran Khan, who envisaged turning religious tourism into a reality by showcasing non-Islamic heritage to the world.

Today, there are approximately 500 million people in the world who identify themselves as Buddhists. They are 7% of the world’s population, making Buddhism the 4th largest religion, behind Christianity, Islam, and Hinduism.

Buddhism developed from the teachings of the Buddha (Sanskrit: “Awakened One”), a teacher who lived in northern India between the mid-6th and mid-4th centuries BCE (Before the Common Era) and spread from India to Central and Southeast Asia, China, Korea, and Japan. Buddhism has played a central role in the spiritual, cultural, and social life of Asia, and by the beginning of the 20th century, it spread to the West.

PM Khan has deployed the strategy of promoting religious tourism in a bid to revive the industry, attract followers of Buddhism and monks from across the globe to visit their holy sites located in Pakistan and endorse religious freedom by preserving and promoting the sites for Buddhists living across the world.

Shedding light on the government’s plans, the Chairman of Pakistan Tourism Development Cooperation (PTDC) Syed Zulfikar Bukhari recently revealed that the trail would begin from Swabi, spread towards Swat and culminate at Taxila – the Kingdom of the Gandhara Civilization. The regions of Punjab and Khyber Pakhtunkhwa were centers of the ancient Gandhara Kingdom, and Punjab alone is home to some of the most revered Buddhist sites including Taxila, Katas Raj, and Tope Mankiala. Peshawar, one of the cultural centers of the Buddhist periods, is home to over 500 monuments and archaeological sites.

The ancient city of Taxila, located around 35 kilometers from the federal capital, is a beautiful destination to explore archeological wonders, and many of the Buddhist sites present here date back to 600 BC and 500 AD. Taxila, for thousands of years, enjoyed great popularity as the epicenter of art, education, architecture, and sculpture in Buddhism.

It is home to over 50 archaeological sites, many of which are inspired or symbolic for the life of Lord Gautama Buddha. Some of the most riveting sites of Taxila include the Bhir mound, Jandial Temple, Dharmarajika Stupa, and the Jaulian Monastery. “To promote religious tourism at Taxila, the Buddhist prayer ceremonies on the eve of Buddha’s birthday should be held every year with international cooperation of Buddhist countries,” renowned anthropologist Dr. Nadeem Omar Tarar suggests.

He suggests hotels, restaurants, tourists and administration centers should be established in the first zone, facilities for pilgrims to attain knowledge and undergo spiritual training before entering into the sacred area in the second zone, and necessary facilities for undertaking Buddhist rituals should be provided in the third zone.

Apart from setting up different zones, he says, opportunities should be created for Buddhists, monks or pilgrims to live and worship in the monasteries, for extended duration of time just like Sikh pilgrims pray in the sanctuary of their Gurdwaras all over Punjab in Pakistan.

Adjacent to Taxila stands the ancient Kingdom of Gandhara, which is a poignant reminder of stupas and Buddha statues erected on the orders of Ashoka the Great, the Maurya King, who set out to spread the message of Buddha. These exquisitely carved Buddha statues and stupas were built back in 300 or 400 BC, and many of these sites, such as the 13 edicts of Ashoka, can be explored in present-day Mansehra.

“Dedicated attention to Taxila alone can put Pakistan on the world tourist map and galvanize the Buddhist heritage trail of the entire Gandhara region,” Tarar says, adding that “a small step in the right direction today can become a quantum leap for tomorrow in realizing the true potential of religious tourism in Pakistan.”

Khyber Pakhtunkhwa’s Takht-i-Bahi is a wondrous journey into the historic art of Buddhist sculpturing, home to the Dharmarajika Stupa, and other archaeological sites of great historical significance. Takht-i-Bahi is the site of the ruins of an ancient Buddhist monastery, erected atop a 152-meter hill, and presently surrounded by a bustling bazaar.

It is located about 80 kilometers from Peshawar and 16 kilometers northwest of the city of Mardan. Archaeologists believe that the ancient ruins of Takht-i-Bahi dated back to the 7th century and were an integral part of the Gandhara Kingdom. It is home to a wide range of astounding relics and ancient remains, and a number of stupas built on the orders of Ashoka the Great.

Khyber Pakhtunkhwa is home to a wide range of other Buddhist sites that tempt tourists to hike up in the mountains and hills to feast their eyes on ancient wonders. Mansehra offers a great many edicts and stupas, while Bhamala is the site that hosts the statue of a 1700-year old sleeping Buddha.

Takht-i-Bahi – the most impressive and complete Buddhist monastery in Pakistan – was first mentioned by the French officer of Maharaja Ranjit Singh in 1836. On the top of the hill, behind the monastery, one can look down the grasslands, far as Peshawar on one side and up to the Malakand Pass and the mountains of Swat on the other.

One of the most remarkable features of the site is the design and arrangement of the range of small shrines that surround the central stupa court. It consists of a large rectangular court, on the north of which is the main monastery and to the south is a well-planned monastic shrine of the high terrace. It is also home to fragmentary sculptures in stone and stucco.

The ancient Kingdom of Gandhara spread over modern-day Khyber Pakhtunkhwa and some parts of Afghanistan. It stretched from the hilly valley of Peshawar and rolled into the mountainous valleys of Swat, Buner, Dir, and Bajaur. During the Buddhist period, Swat, known as Uddiyana, was one of the epicenters of Buddhist culture, religion and education, and home to over 6,000 monasteries.

During the reign of Ashoka the Great and the emperors that followed, Swat thrived as the center of Buddhist culture as home to an abundance of Buddhist monasteries and holy sites. This mesmerizing valley is famous in the world as the “holy land of Buddhist learning and piety.”

Swat is home to a large conflux of Buddhist sites, well-preserved stupas, ancient settlements, rock-carvings, sculptures, viharas, monasteries, and inscriptions scattered in the rugged, mountainous terrain of the valley. Butkara is one of the most notable Buddhist holy sites in Swat, tourists can explore the ruins of the ancient Ta-Lo Monastery, alongside a variety of stunning stupas, columns, and viharas.

The Nemogram Stupa and Monastery tucked away in Swat’s Shamozai valley, is another site of great archeological and religious significance. It is home to some of the most exquisite stone-carvings and Stucco sculptures that are symbolic of Buddhist mythology. A splendid statue of Buddha, located near the village of Ghalegay, holds great fascination amongst Buddhist pilgrims.

The Gumbatuna Stupa is another historical wonder, situated in the village of Barikot, on the right bank of the River Swat. This area is home to a wide range of archeological sites, spreading across the mountains known as the Shamozai Range. In February 2019, this old term, “Switzerland of Pakistan” acquired a new meaning when Swiss Ambassador to Pakistan, Thomas Kolly, lead a delegation to Swat Museum and the archaeological site of Butkara.

Kolly, reportedly, told the media that Swat valley has enormous potential for international tourism, because of its gorgeous landscape, rich cultural heritage, archaeological treasures, and well-mannered people. But the diplomat of the mountainous Central European country – itself home to numerous lakes, villages and the high peaks of the Alps – also asserted that Swat has something more than landscape.

It was the centuries-old cultural heritage, he said. Historians believe that Swat was once the cradle of Buddhism where 1400 monasteries had survived and flourished, and there existed a Gandhara School of Sculpture that was once a major hub of Buddhist pilgrimage. Legend and belief argue that in early times, Buddha himself came to Swat in the process of his last reincarnations, and he spread the learning of peace and harmony. It was thus also given the name of “cradle of Buddhism.”

Belief has it that Alexander the Great had fought many significant battles in this land before he crossed the delta of Indus River. It may or may not be historically accurate; Indus is neither very close nor very far from here. But then legend and myth are always more enticing than the facts.

Beyond the Glitzy Skyscrapers? Nationality, Citizenship, and Class in Dubai