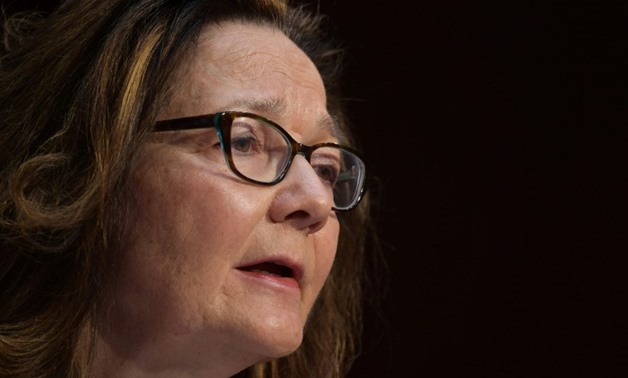 CIA nominee director Gina Haspel said Wednesday she would not reinstate the spy agency’s interrogations program even if ordered by President Donald Trump but expressed no regrets for her part in detainee torture after the September 11, 2001 attacks.

Facing opposition over her role at a secret CIA prison in Thailand in 2002 where Al-Qaeda detainees were waterboarded, Haspel made clear she would not support such activity in the future if she is confirmed as CIA director.

“Having served in that tumultuous time, I can offer you my personal commitment, clearly and without reservation, that under my leadership CIA will not restart such a detention and interrogation program,” she told the Senate Intelligence Committee.

Read more: The truth about torture: CIA chief can’t lead without facing her…

But Haspel, currently CIA deputy director and acting director, refused to condemn the 2002-2005 program, during which scores of Al-Qaeda suspects were captured, whisked to “black sites” at secret locations around the world, and subjected to brutal interrogations that for some included repeated waterboarding, a practice that simulates drowning.

“Like all of us who were in the counterterrorism center and working at CIA and those years after 9/11, we all believed in our work,” she said.

“We had been charged with making sure the country wasn’t attacked again, and we had been informed that the techniques in CIA’s program were legal and authorized by the highest legal authority in the country and also the president,” she said.

“I don’t believe that torture works,” she added. But she noted that the interrogation program as a whole produced “valuable information” that helped disrupt more attacks, though could not say the role of torture in that.

Republican Senator John McCain, who was himself tortured while a prisoner of war in North Vietnam, urged lawmakers to vote no on Haspel’s nomination.

“Ms Haspel’s role in overseeing the use of torture by Americans is disturbing. Her refusal to acknowledge torture’s immorality is disqualifying,” McCain said in a statement.

Read more: The sole reason behind the downfall of the USA

After 33 years in the shadow of the CIA’s covert operations, Haspel was making her first-ever public appearance.

Amid several disruptions by protestors branding her a “torturer,” Haspel, 61, calmly made the case to skeptical Democrats that she is the right person to lead the CIA, after previous director Mike Pompeo was moved by Trump to be secretary of state.

“I don’t need time to learn the business of what CIA does. I know CIA like the back of my hand. I know them, I know the threats we face, and I know what we need to be successful in our mission.”

She said she was proud of having broken through barriers to women rising in the agency’s ranks, placing her on the verge of being the first woman to head the country’s premier spy agency.

Read more: What happened to that ‘invasion’ of America?

Democrats, however, worry that Trump and top aides are not opposed to the use of outlawed techniques in interrogations. Asked what she would do if Trump ordered her to restart interrogations, Haspel replied that she bows to a “higher moral standard.”

“My moral compass is strong. I would not allow CIA to undertake activity that I thought was immoral, even if it was technically legal. I would absolutely not permit it.”

Both Trump and Pompeo expressed support for Haspel and her testimony on Wednesday night.

“Gina Haspel did a spectacular job today. There is nobody even close to run the CIA!” Trump wrote on Twitter.

“I had the chance to watch Acting CIA Director Gina Haspel testify. I’m looking forward to receiving intelligence as Secretary of State from this amazing leader. Win Gina!” Pompeo tweeted.

In her testimony, she bared some details about a 33 year career at the spy agency, almost all of it spent in clandestine operations.

After growing up around the world as the daughter of a member of the US Air Force, she was drawn to the CIA by what she felt was the excitement it offered, and picked up the techniques of being an undercover operative very quickly after she joined in 1985.

“I excelled in finding and acquiring secret information that I obtained in brush passes, dead drops, or in meetings in dusty back alleys of third world capitals,” she said.

“I recall my first foreign agent meeting was on a dark, moonless night with an agent I’d never met before. When I picked him up, he passed me the intelligence and I passed him extra money for the men he led.”

“It was the beginning of an adventure I had only dreamed of.”

Read more: How the US destroyed Afghanistan

Still, Haspel’s testimony was not enough to sway Democrats, who want her to make public more information about the interrogation program and her role in it.

While it appeared likely that her nomination would pass a committee vote as early as next week, Democratic Senator Kamala Harris was one of several who said they would vote against her.

“Based on her full record, today’s hearing & the lack of transparency in this process, I will vote no on Gina Haspel’s nomination for CIA Director,” Harris said via Twitter.

“It sends the wrong signal to the CIA workforce, the American people, and countries abroad about our values.”