A Hong Kong police officer shot at masked protesters on Monday morning. The shooting, which was broadcast live on Facebook, is the latest escalation in more than five months of seething pro-democracy protests. 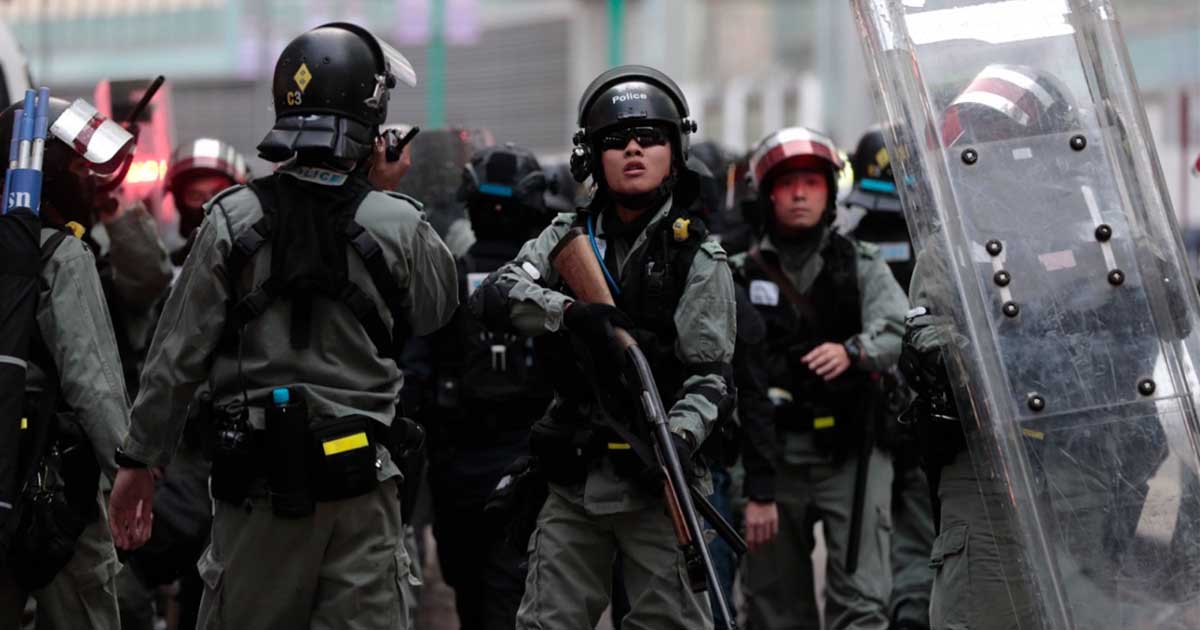 A Hong Kong police officer shot at masked protesters on Monday morning, hitting at least one in the torso, as anger sparked by the recent death of a student spilled into the rush hour commute.

The shooting, which was broadcast live on Facebook, is the latest escalation in more than five months of seething pro-democracy protests that have engulfed the international financial hub and battered its reputation.

Protesters and onlookers threw objects at plainclothes police in a shopping mall while officers used batons to subdue the activists as Hong Kong entered its 24th straight week of anti-government protests https://t.co/IPwPEUmz2q pic.twitter.com/XeNqR6bnXC

Footage showed a police officer drawing his sidearm in the district of Sai Wan Ho as he tried to detain a masked person at a junction that had been blocked by protesters.

Immediately after Monday’s shooting, crowds of locals gathered to hurl insults at officers who responded with pepper spray and made multiple arrests.

Another masked individual then approached the officer and was shot in the chest area, quickly falling to the ground, clutching their left side. Seconds later, two more live rounds were fired by the officer during a scuffle and another masked protester went to ground, although the footage was less clear as to whether he was struck.

Police then detained the two people on the ground. A pool of blood could be seen near the first individual whose body initially appeared limp, although the person was later filmed conscious and even trying to make a run for it.

The second man was conscious, shouting his name to reporters as he was handcuffed. A police source, speaking on condition of anonymity, confirmed to AFP that live rounds were fired at more than one protester in Sai Wan Ho and that a statement would be issued.

WATCH: Tear gas and water cannons are used on the streets of Hong Kong as demonstrators protest the death of a student who fell from a parking structure while being chased by police. https://t.co/seDcTHAUma pic.twitter.com/y1GrbNbriJ

Hospital authorities said three people were admitted from the incident, one with a gunshot wound.

Hong Kong has been upended by 24 consecutive weeks of huge and increasingly violent rallies, but Beijing has refused to give in to a movement calling for greater democratic rights and police accountability.

Tensions have soared in recent days following the death on Friday of a 22-year-old student who succumbed to injuries sustained from a fall in the vicinity of a police clearance operation the weekend before.

Two more live rounds were fired by the officer during a scuffle and another masked protester went to ground, although the footage was less clear as to whether he was struck.

Flashmob protests sprung up in multiple districts during the commuter period, with small groups of masked protesters targeting subway stations and building barricades on road junctions.

Even before the shooting in Sai Wan Ho, tear gas had been fired in at least two other locations. One video circulated by protesters on messaging channels from Kwai Fong district showed a police officer trying to drive his motorbike multiple times into protesters who had gathered on a road.

Monday’s shooting is the third time protesters have been shot with live rounds by police. The two previous instances last month came as protesters attacked police officers and the victims, both teenagers, survived their wounds.

With no political solution on the table, officers have been left to battle violent protesters and are now loathed by large chunks of the deeply polarised population. Immediately after Monday’s shooting, crowds of locals gathered to hurl insults at officers who responded with pepper spray and made multiple arrests.

The city has seen four days of violent protests since Alex Chow’s death as well as tens of thousands attending peaceful mass vigils.

Police have defended their tactics as a proportionate response to protesters who have embraced throwing bricks and petrol bombs as well as vandalising pro-China businesses and beating opponents.

But an independent inquiry into the police has become a core demand of the protest movement, with public anger fuelled by weekly videos of controversial police tactics and aggressive interactions with locals.

Hong Kong’s police watchdog has neither the authority nor the resources to effectively investigate the ongoing protests, according to the Independent Expert Panel https://t.co/adrGLG2kW8

In one incident which sparked uproar, a police officer on Friday evening shouting at protesters that he and his colleagues were “opening a bottle of champagne” after the death of the student.

The force said the officer was later reprimanded for his language. Both Beijing and Hong Kong’s unelected leader Carrie Lam have rejected an independent inquiry, saying the city’s current police watchdog is up to the task.

But last week, in an embarrassing setback, an international panel of experts appointed by authorities to advise the watchdog said it did not currently have the capability or resources to carry out such a huge probe.

China is losing its economic game!

China condemns US for congratulating Tsai on Taiwan poll win