How rogue lawyers are destroying courts?

Legal minds in Bar and Bench seem to be oblivious of the challenges that confront them in the form of rogue lawyers. These rogue lawyers are becoming ever bigger problem due to repeated weakness of courts and are now clearly undermining the judiciary's role and moral authority in the country. They need to be disciplined - its now or never! 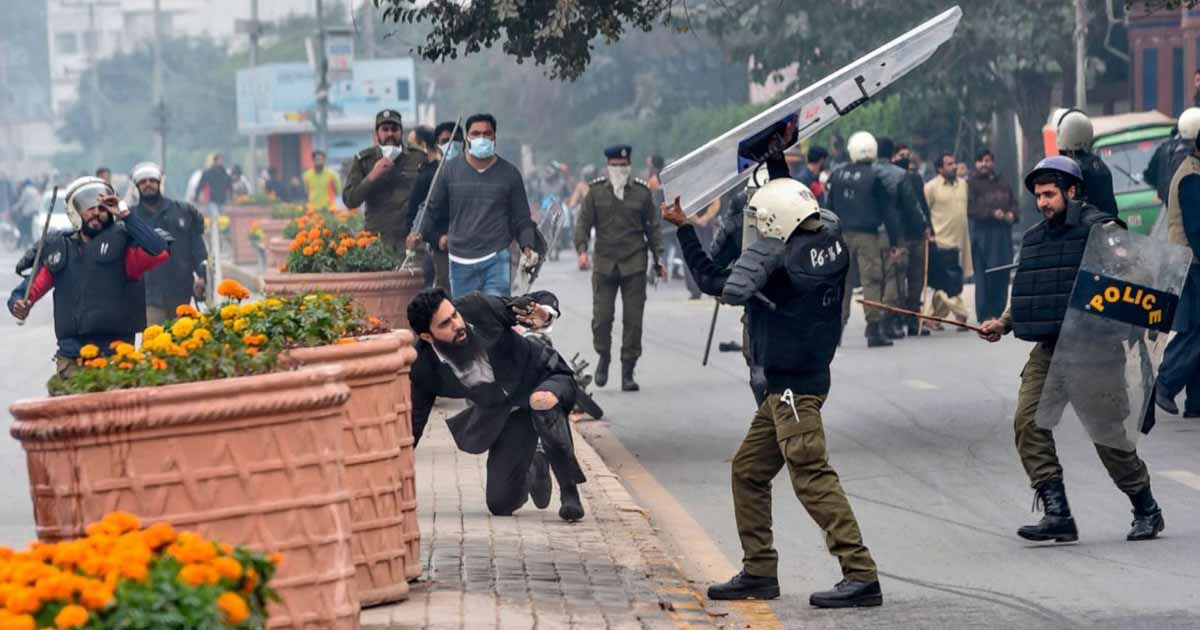 How Pakistan’s judiciary is being undermined by rogue lawyers? Apparently this is not being understood by the top minds in Pakistan’s bar and bench. How else do we make sense of an amazingly weak decision of an Anti-Terror Court (ATC) in Lahore on 12th December and total silence by Supreme Court of Pakistan – lead by a scholar judge like Asif Saeed Khosa.

The judge "observed that the accused lawyers were nominated in the FIRs but no specific role had been attributed to them. He said it had not been mentioned in the FIRs who were carrying the weapons."https://t.co/JkJUFgf0pP

Their pretext was a satirical video made against their key leaders by a certain Dr. Irfan of PIC Hospital. In this video, this young doctor, looking like a joker, standing on a bench, and surrounded by doctors and nurses, was making fun of the lawyers who according to him had gone from post to pillar but could not register an Anti-Terror FIR against him and his colleagues (that incident also related to an earlier scuffle inside the hospital).

Logic and rationality have suffered so badly in Pakistan’s legal profession and politics that many senior lawyers and at least some key politicians have tried making the case in full public view (on TV and parliament) that attacking lawyers are not wholly responsible since they were provoked by the video.

This bizarre logic is symptomatic of Pakistani mental pathology where words like “Rule of Law” and “Justice” etc are used without the slightest of understanding of principles that define the evolution of law.

It’s even more disappointing for a Muslim nation whose governing philosophy, Islam, effectively differentiates between both Equality and Equity. It’s the concept of “Equity” that is more or less defined as “proportionate” in modern western law. Islam was clear about “Equity” 1500 years ago.

So it is more than funny when senior lawyers and a politician try justifying the attack on a hospital – because a video by a young doctor had made fun of lawyers. With this definition of “provocation” being debated on TV, no wonder, Pakistani lawyers, the legal profession, courts, and jurists have not earned any place or impact in the world of jurisprudence.

What happened was grisly and unbelievable. A group of rogue lawyers, between 250-300, wearing their customary black jackets, marched from Lahore courts, with sticks and bars in their hands, raising slogans of revenge and after marching for almost two hours like a primitive Lashkar – of Nader Shah Durrani or Ghulam Qadir Rohilla – attacked and ransacked Punjab’s Institute of Cardiology beating doctors, nurses, paramedics.

Another supreme leader of lawyers daring Gov to challenge the might of lawyers. I repeat the rot among the legal community right from the top. The lack of respect for rule of law is not a new phenomenon. The mushrooming of lawyers has only given it more footsoldiers pic.twitter.com/EUvRpm4EaM

These lawyers, wearing black jackets, barged into Operation theatres, ICU, Radiology and Nurse’s wards and destroyed sophisticated equipment. During this mayhem, 3-4 patients died inside the hospital and few lawyers were caught on TV cameras openly displaying pistols. Patients, many of whom critically ill, had to run off saving lives. The hospital remained closed for the next two days with its equipment under repair and patients were shuffled to other hospitals.

This event was grotesque in itself, unparalleled in the history of the sub-continent at least, but what followed was even more ugly. Instead of being condemned, most Bar Associations across Punjab and even in Islamabad went to demonstrations, strikes, and protests to support the “Rogue Lawyers of Lahore” that had attacked a hospital.

Read more: Lawyer or Judge, who give respect to Doctor in Katcheri or Court will be Dismembered

And when 46 arrested lawyers were presented by police to an ATC Court for physical remand, the honorable judge refused to remand to police and sent the arrested lawyers to judicial lock-up – that means police will not be able to investigate, not collect evidence and will end up with a weak case leading to easy acquittal of these lawyers who had attacked a Hospital.

Hospitals are not attacked even in wars. When such attacks rarely happened (accidental aerial strikes) they were almost always accepted as blunders and attackers apologized. Actions of lawyers in Lahore are thus unprecedented, but the way things are on ground it looks likely that they will remain unpunished and courts will not be able to act decisively to set a deterrent.

I have commented on this bizarre situation in two video blogs on two consecutive days.

But I have noticed that these two blogs have generated less interest than my blogs on politics of Imran Khan and his opposition or issues of India and Pakistan- this is another tragedy of consciousness because attack on Hospital by lawyers and a muted reaction by courts has far serious implications for Pakistan than anything Imran Khan and his opposition can do on a daily or weekly basis.

In Pakistan law is mostly debated as sections and sub-sections of statutory law or articles of the constitution. Smartness lies in giving new meaning to these sections and sub-sections or reinterpreting past judgments. A country of 220 million does not have proper law colleges and practitioners of law are hired as faculty for the outfits that function as law colleges.

There is no real concept of legal academia. Pakistan has no legal researchers, writers or jurists and whatever has been produced in the last 70 plus years has not created an impact in the world.

The goal of all legal education, in Pakistan, is to get a degree (with or without studying) that can facilitate getting a license. In many instances, both degree and license may have been obtained by fraud or cheating. Many Pakistani lawyers that have gone to the UK for getting LLM (I have been told by lawyers) have never passed their exams but they keep on introducing themselves as LLM.

Young lawyers without proper education, skill sets and practice are extremely frustrated and ideas of protests, demonstration and violence allure them. They can be easily seduced by terms like Democracy, Justice, Bureaucracy and so on – often without any understanding that may lay behind these concepts.

Courts: Exist for themselves or for the realm?

In this peculiar climate much hyped by a nascent expansion of TV media (of which I am a part), it is not understood that modern law, implemented through courts, is a sophisticated concept. A crude underdeveloped state or administration can exist without independent courts.

Ideas of Executive Magistracy are not much far in our past and still many legal and administrative jurisdictions in the world may be toying with similar ideas where governments and administrations run their own courts and legal dispensations. Bottom line is that courts, in a historical perspective, are not indispensable.

In a viral video, the lawyers can be seen issuing threats to the doctors in Karachi by terming the act of attack at Punjab Institute of Cardiology (PIC) by their colleagues in Lahore, right.#ARYNews

For those who fail to grasp this rather academic statement, there is more to chew. Courts exist and function in a supportive political and administrative setup. Courts can function when a sovereign exists with its structural wherewithal and provides the physical force that is needed for the implementation of court decisions. Courts don’t possess troops or policing and administrative power to implement whatever they decide.

Courts thus function as brains, as highest forums of logical and rational decision making of a realm – but of a realm. They don’t and cannot exist on their own. And let’s not forget, courts fall when a sovereign falls due to defeat, destabilization or anarchy. When Mughal Emperor Shah Alam was being kicked by goons of Ghulam Qadir Rohilla, no Qazi courts could function to give relief to the public or the realm.

When Mughal princesses were being raped in Red Fort by Rohillas they were not expecting help from Mughal courts and Qazis but were praying for soldiers of Maratha General, Mahadji Scindia to arrive and save their honor. When Bahadur Shah Zafar falls then it was the courts of East India Company or later the English Crown that mattered.

It is said that law and music are the highest achievements of human civilization and mind – the reason perhaps is that both reflect the human grasp of proportion. Law is the codification of human logic and reasoning. While it finds expressions as sections and sub-sections but if interpretation ignores the philosophy behind then courts cease to exist – for buildings, furniture and fixtures don’t constitute a court; it’s the moral authority of the decision that matters.

If courts fail to support a realm, then sooner or later they cease to exist for a frail, chaotic and disorderly realm fails to provide the structural strength which courts need for their functioning.

It’s high time for Pakistan’s legal minds in bar and the bench to grapple with the challenge thrown up by rogue lashkars of young lawyers.

Who is going to teach lawyers when there are no genuine law schools and courts have succumbed to their pressure tactics? What do we make of the ATC decision that denies physical remand of arrested lawyers? https://t.co/AHJUGXIUDh via @@GVS_News

Decision by ATC Judge has set a stage for a very weak state that will fail to effectively punish an “Act against Humanity” unless culprits who planned and attacked the Punjab Institute of Cardiology on 11th December are convicted and punished effectively to set a deterrence, state of Pakistan (the realm) and its courts both will not be able to save themselves from the “Anarchy” that awaits them.

Moeed Pirzada is Editor Global Village Space; he is a prominent TV Anchor and has previously served with Civil Services of Pakistan (18th CTP), Twitter: MoeedNj

Previous articleGovernment-Opposition Rift: Consultations on Legislation on Army Chief’s Extension
Next articleWorld Leaders praise Qatar for dealing with blockade through focusing on economy