India, the world’s largest importer of weapons has a history of rolling geopolitics and weapon purchases together as a balancing act, which was at display during the official visit of President Putin to New Delhi. The media coverage of the visit was dominated by a $5.43 billion deal for five S-400 Triumf Air Defense Systems, which Pakistan believes will destabilize the strategic balance in South Asia.

The Indian media constructed a narrative that this particular system would bring India into a dominant position over Pakistan by enabling it to shoot down the Pakistani aircraft and missiles in an event of war inside Pakistan’s territory.

Some Indian pundits also declared that the S-400 system would become a critical piece of India’s so-called ‘Cold Start limited warfare doctrine’– when the system is delivered in 2020-2021. The Indian information war over this purchase alarmed many in Pakistan, separating ‘myth from reality’ regarding this deal. 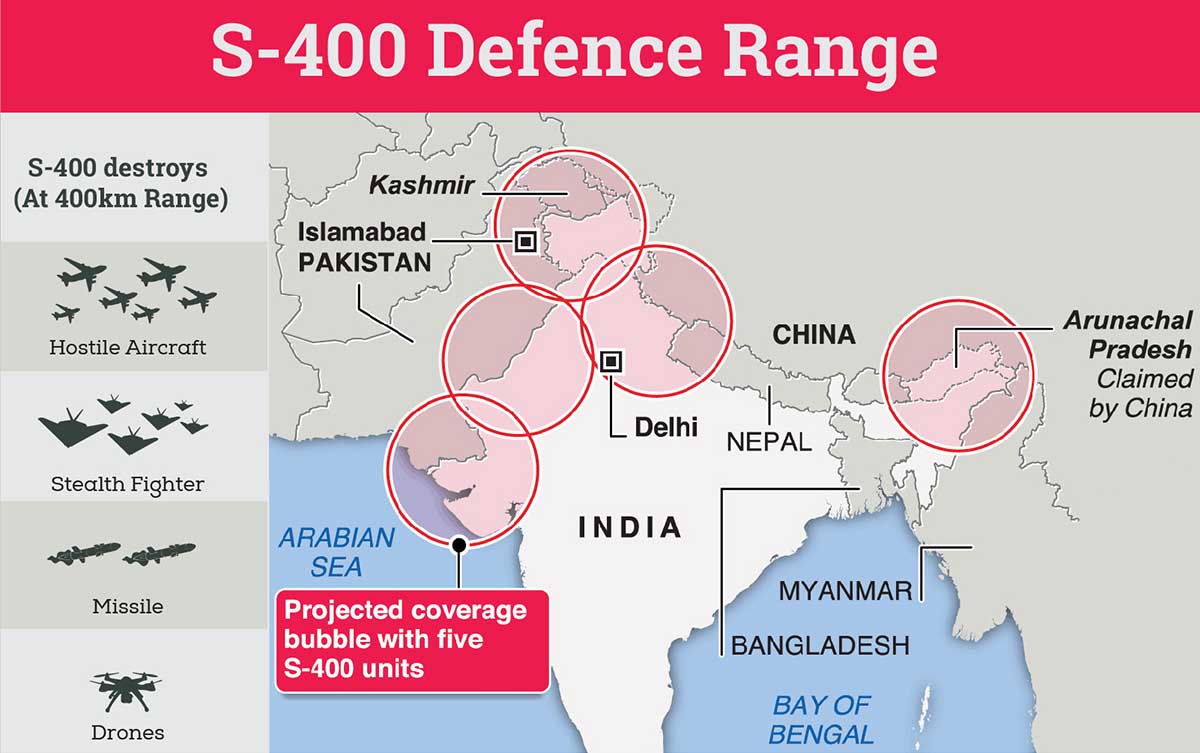 The S-400 Triumf, known to NATO as the SA-21 Growler is a further development of Russia’s S-300 PMU-2 Air Defense System, which was designed in the 1990s by the Russian Almaz Central Design Bureau. The S-400 is the most advanced and capable Russian Air Defense System that went operational with the Russian Aerospace Defense Forces in 2007 and has recently been deployed in Syria to protect Russian military assets.

The S-400 is currently operated by Russia and China, while the deals are being negotiated with Turkey, Saudi Arabia, Iraq, Qatar, Egypt, and Algeria. The S-400 is a complete weapon system with a dedicated sensor architecture, fire control system, and 4 types of different missiles designed for different ranges and different types of airborne targets.

This means that the S-400 sites can be attacked and destroyed once they have been identified through various human and remote sensing methods of intelligence gathering.

The S-400 can also integrate other Russian made Air Defense Systems (ADS) like S-300 family, Pantsir-S1, Tor-M2, and BUK family etc. into its own data link, enabling them to function in a network-centric environment. If the official specifications are taken at their face value, the S-400 is the best Air Defense System available in the market today and represents a great challenge for the Pakistan Air Force.

Having stated the officially claimed capabilities by the S-400 manufacturer, not to forget every weapon system has its weaknesses and S-400 is no exception, therefore it is important to read the fine print before drawing up any conclusions on the real battlefield relevant capabilities of this system. Here are some of the key things to consider in this regard.

Pakistan’s official response to the Indian S-400 purchase was; “To develop capabilities which render any Ballistic Missile Defense system ineffective and unreliable”. The best counterstrategy to the S-400 deployment is to develop a set of capabilities designed to attack and destroy the Indian ADS during a war.

The industrial capability of Pakistan to produce ballistic and cruise missiles systems should be leveraged to develop a strike package made up of decoys and missiles with enhanced speed and accuracy.

Pakistan already has different types of missiles like the Ghauri, Shaheen-1A, Ghaznavi, Abdali, CM-400 AKG, Raad Air-Launched Cruise Missile and Babur Cruise Missile System which possess enough standoff range to be fired from a safe distance and can be deployed to preemptively destroy the Indian Air Defense Sites including the S-400 installations.

If Pakistan cannot ensure the survival of its nuclear delivery vehicles– as it doesn’t possess such capability yet– the situation will surely hamper the strategic stability in the South Asian region.

The S-400 system will be deployed by India to protect its important static installations and is unlikely to be used as a mobile Air Defense System. This means that the S-400 sites can be attacked and destroyed once they have been identified through various human and remote sensing methods of intelligence gathering.

Apart from the existing weapon systems possessed by Pakistan, the SY-400 short-range precision-attack ballistic missile system and the YJ-12 air-launched missile can be acquired from China, enabling Pakistan to form another tier of its Destruction of Enemy Air Defenses (DEAD) strategy. 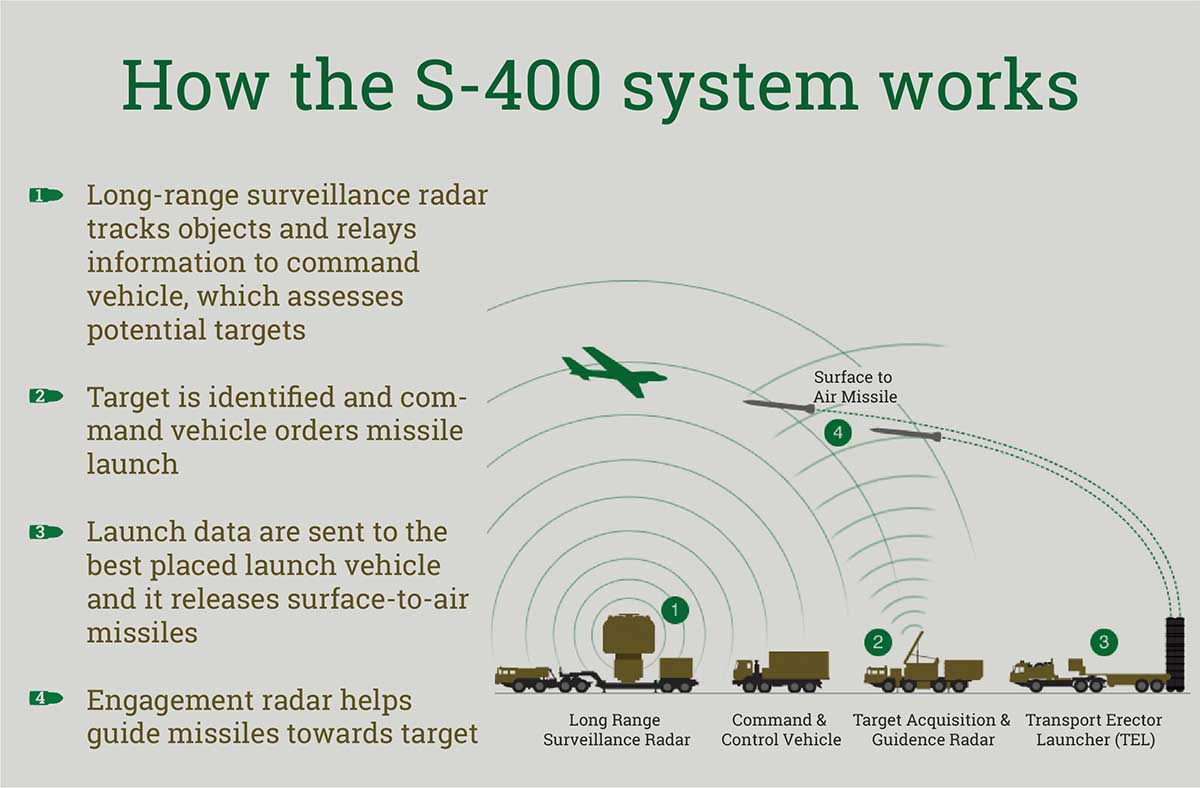 Both of these weapons were designed to penetrate sophisticated Enemy Air Defenses (EAD) to strike targets as far as 400kms away; considering the maximum range of the S-400’s mainstay missile is 240km, these weapons are well suited for counter battery fire operations.

Another cost-effective solution can be to purchase local production rights for the Chinese A-300 Multiple Rocket Launcher System, which can deliver 8X 400mm GPS, Inertial guided rockets carrying 150kg warhead each, with Circular Error Probability (CEP) of 30 to 45 meters at a maximum effective range of 290 km. This weapon system can fire its payload in just less than 50 seconds and can be replenished within 8 minutes.

It will force India to deploy the S-400 system at least 300 km away from Pakistan’s border, unless they want to lose their multibillion-dollar system to Pakistan’s relatively cheaper and expendable rocket systems, making the S-400 all but redundant – by almost eliminating its much-touted ability to shoot down Pakistani aircrafts and missiles flying inside our own airspace.

A number of former F-16 pilots from the Pakistan Air Force consulted –to better understand the subject from a war fighter’s point of view– mentioned that the early detection of the S-400 sites using human, electronic and remote sensing intelligence-gathering assets could successfully suppress the S-400.

Developing radiation homing seekers (to guide the cruise missiles to destroy the enemy radar sites), an Electronic Warfare variant of the JF-17B thunder fighter aircraft and our own Defense Network can better protect military and economic assets during war times. Pakistan’s most immediate concern is the threat posed to its ballistic missiles. If Pakistan cannot ensure the survival of its nuclear delivery vehicles– as it doesn’t possess such capability yet– the situation will surely hamper the strategic stability in the South Asian region.

It could, in fact, harm the Russian bid to sell the Mig-35 and Su-57 fighter aircraft to India in the future, which could ultimately see Russia, lose out on billions of dollars of future military sales to India.

In order to counter this threat, Pakistan should leverage its own strengths and invest in disruptive and offensive technologies like the Multiple Independently Targetable Re-entry Vehicles (MIRV) like the one demonstrated by Pakistan’s Ababeel Ballistic Missile and also develop a Hypersonic Glide Vehicle (HGV), instead of investing large sums of funds into purchasing a Ballistic Missile Defense System of its own.

The MIRV and HGV technologies combined with an improved intelligence-gathering network and a multi-layered Destruction of Enemy Air Defenses (DEAD) architecture can ensure the delivery of Pakistan’s nuclear weapons to their intended targets for decades to come – all at a sustainable cost.

Although India’s S-400s are being purchased to counter the Chinese airpower buildup in the Tibetan plateau region, it still presents a danger to Pakistan Air Force and Pakistan’s Strategic Missile forces, therefore Pakistan will have to come up with a comprehensive counter-strategy.

India will also have to settle for an expensive offset weapons deal with the United States worth billions of dollars to earn a waiver from the CAATSA act. It could, in fact, harm the Russian bid to sell the Mig-35 and Su-57 fighter aircraft to India in the future, which could ultimately see Russia, lose out on billions of dollars of future military sales to India.

Shahid Raza is the Editor Strategic Affairs at GVS News; He serves as the Director of Geopolitical Research at Command Eleven. He is also a Policy Consultant who conducts independent research and analysis for Katehon Think Tank, Sputnik Radio International, & Geopolitica Russia. He focuses on the geopolitical and security dynamics of Central and South Asia, the Middle East, and North Africa.