Given the media-hype created over the years, the Indian public is baying for Chinese blood. Modi is caught between a rock and a hard place, a loss-loss situation on both fronts. What can we expect - war or settlement? 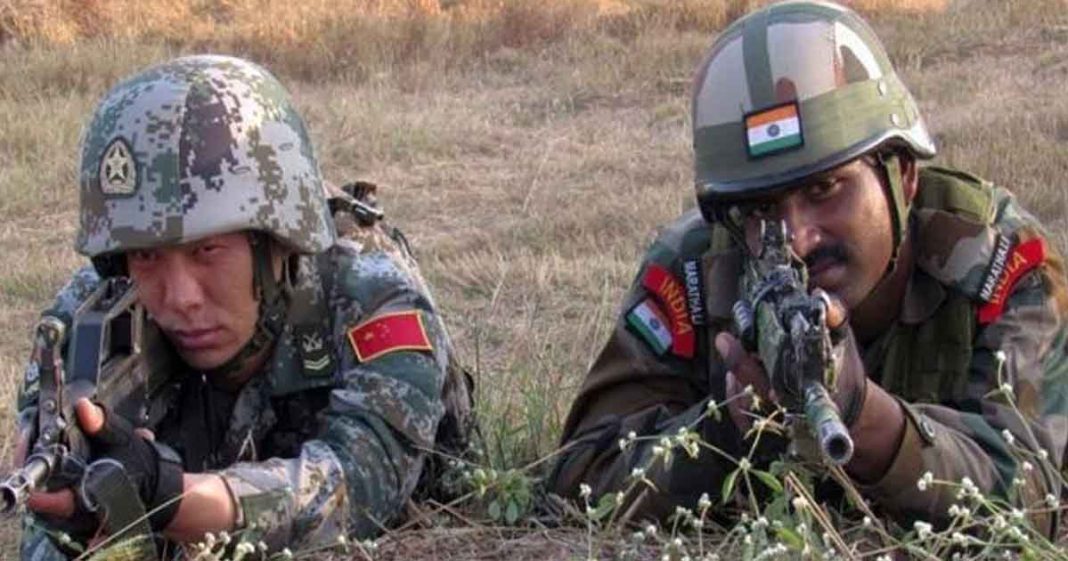 Despite the ongoing pandemic hitting India more than China, India has been engaging in blunders like anti-Muslim policies and the Kashmir settlement laws in the disputed area of Indian Held Kashmir (IHK) in utter disregard to UN Resolutions and international laws and norms. Force-multiplying their problems Modi and his BJP Govt is now trying to construct a road in the border area with China in a valley in Ladakh which China claims as its own territory.

Borders in the subcontinent are a colonial inheritance with a potential for creating trouble until today. India’s border conflict with China as well as those with almost all others of its neighbours are an outcome of the decolonization of the subcontinent that created independent national states who considered their territories as their most defining characteristic. When the British left India they left behind this apple of discord to be dealt with by the newly independent states.

Pakistan has its own share of it with the Durand Line and one of India’s inheritances is the McMahon Line forming the border between India and China in the Himalayas between the Tibetan region of China and the North-East Frontier region (NEFA) – Arunachal Pradesh bordering Assam. Named after the British colonial administrator Sir Henry McMahon, China does not recognize border this because Tibet on which consensus the line had been drawn was not an independent state and consequently, had no right to conclude treaties.

Ruling India in the 1950s and 60s, the Indian Congress Party (led by PM Jawaharlal Nehru) insisted that independent India inherited the imperial powers that the British had had before leaving; India’s own Empire. Thus, in 1954 Nehru ordered maps of India published that showed expansive Indian territorial claims as definite boundaries, notably the Aksai Chin and thus broke the truce that until that time had persisted. India thus started the war that is going on in cold and hot phases until today.

To support the claim the Indian press openly started advocating Tibetan independence. Already suspicious given the ruminations of the Indian press, Chinese leaders began to suspect Nehru’s designs in the region. In August 1959, Chinese troops captured a new Indian military outpost at Longju which was just north of the McMahon Line thus safely on Chinese ground according to Indian mountaineer Haris Karpadia.

On 24 October 1959, Zhou Enlai proposed in a letter to Nehru that to de-escalate, India and China should withdraw their forces 20 kilometres from the Line of Actual Control (LAC). Instead of seeking to quickly assert sovereignty Nehru established “a Forward Policy” in Nov 1961 that planned many as 43 military posts along the frontier north of the LAC -thus on Chinese territory, unannounced and against the advice of his staff. That triggered the 1962 war between India and China which ended in a devastating defeat for India.

In 1970, Neville Maxwell who had taken a sabbatical to study the detailed background of the border dispute published an influential book called “India’s China War” chronicling how India provoked Beijing into the fight, challenging the Indian official narrative of Chinese aggression. In 2014 in a specially created blog, the Australian journalist published a chunk of Indian secret war reports that harshly criticised the highest echelons of power in India at the time of the 1962 war for pursuing a flawed strategy of provoking China without the means to handle a backlash.

India’s toll in that short war in the high Himalayas was 1,383 killed, 1,047 wounded and 1,696 missing. The war ended when Beijing suddenly called a unilateral ceasefire and ordered its troops to retreat to their previous positions – all after dealing India its worst military drubbing. Pakistan had committed such a strategic blunder in 1962 when on the assurance of US support (and PM Nehru’s promises), it did not move into Kashmir and was left in the lurch later.

The recent escalation in tensions along the Indo-Chinese border is erringly similar, it was sparked when Indian and Chinese soldiers came to physical blows near a border pass in Sikkim in early May. Face-offs are now ongoing at multiple locations, in not only eastern Ladakh, along the LAC that has persisted since the 1962 Sino-Indian War but also in NEFA in the vicinity of the Natha Pass and the Doklam Plateau adjacent to Bhutan. Most recent of them is at the Galwan River valley in Ladakh, where the Chinese forces objected to an Indian road construction within Chinese territory.

Read more: Should we start countdown for War In Asia?

Seven Chinese and four Indians were reportedly injured in the fisticuffs but no shots were fired. China contests India’s interpretation of the LAC’s location and views the roadworks as a potential threat to its hold over the remote border territory, including the strategic highway it built from Kashgar in western Xinjiang to Tibet’s capital Lhasa in the mid-1950s to connect the two outlying and often restive ethnically diverse areas.

On May 18, China officially accused India of being responsible for “illegal construction of defence facilities across the border into Chinese territory in the Galwan valley” in Ladakh and implied US intentions to encourage Indian territorial gains along the Chinese border. It maintained that “the Indian government should keep a sober head and not be used as cannon ash by the US.

Two days later on 27 May US President Trump tweeted that the US was “ready, willing and able to mediate or arbitrate [India and China’s] now raging border dispute.” Only hours after President Trump’s mediation offer both countries rejected it by saying that India and China have existing channels to resolve such problems. PM Modi was reportedly quite unhappy with the US initiative seeing it as an attempt at being dragged into the looming Chinese- US cold war which is not in India’s interest.

We have informed both India and China that the United States is ready, willing and able to mediate or arbitrate their now raging border dispute. Thank you!— Donald J. Trump (@realDonaldTrump) May 27, 2020

India and China had engaged in a similar standoff for 73 days at Doklam, at the other end of their disputed border, in 2017, when Indian troops were mobilized to counter what was seen as moves by the Chinese side to expand its presence along the border with Bhutan.

The situation was later defused through diplomatic channels with India unilaterally withdrawing troops from China’s disputed territory with Bhutan, and China agreeing sparing India severe embarrassment in the media and public by not highlighting India’s unilateral retreat.

The Henderson Brooks-Bhagat Report was written by two senior officers in the Indian Army: Lieutenant General Henderson Brooks and Brigadier General Premindra Singh Bhagat (Victoria Cross) as an “Operations Review” of the events leading up to the Sino-Indian War of 1962. The report was kept top secret for many years and it was only on 17 March 2014, that Neville Maxwell who investigated the matter posted volume 1 of the two-volume report on his website.

Maxwell had acquired a copy of the report during his investigations and wrote his book ‘India’s China War’ based on it. It took over half a century for the report to become available for a larger public and until today it is available online though some pages are missing. Marked ‘Top Secret’ on each page the 1963 report is the most severe indictment of independent India’s political and military leadership ever.

While the border conflict between India and China is a long-standing one and has been flaring up from time to time for different reasons the situation now has changed fundamentally with the US dominant military role in the world lessening and a new cold war looming between the old and the upcoming new major powers.

For the time being no military and no political solution for the border conflict is on the cards. India does not have the military and economic power of China. While the Indian public has been revelled because of Bollywood movies extolling Indian “military superiority”, the Indian Army has very correctly assessed themselves as being no match for China.

However, given the media-hype created over the years, the Indian public is baying for Chinese blood. Modi is between a rock and a hard place, a loss-loss situation on both fronts. The real tragedy is that on the other hand China is working to build a multipolar world where big national egos and territorial claims will have no role to play and borders become administrative lines only. This vision may take some time to come true but it is there already on the horizon (the writer is a defence and security analyst).

Ikram Sehgal is acclaimed author of two books “Escape from Oblivion” and “Blood over Different Shades of Green East Pakistan 1971: History Revisited” and is a Pakistani defense analyst and security expert. He is a regular contributor of articles in Pakistani newspapers including The News and the Urdu daily Jang, Nation, and Daily Times. He is a Member of the World Economic Forum (WEF); International Organization for Migration (IOM); Director, East-West Institute (EWI), a US-based think-tank; and Member, WEF Global Agenda Council (GAC) for counter-terrorism. The article first published in Daily Times and has been republished with the author’s permission. The views expressed in this article are the author’s own and do not necessarily reflect Global Village Space’s editorial policy.