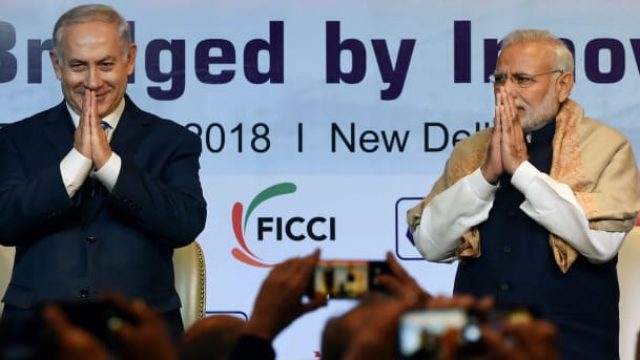 The Stockholm International Peace Research Institute (SIPRI), a Sweden-based think tank, released its annual report that revealed India as the world’s second largest importer of strategic arms and weaponry. The data of annual report “Trends in International Arms Transfers-2018” shows that 58% of the Indian arms imports during 2014 to 2018 were from Russia, while France, USA, and Israel have also increased their arms exports to the South Asian state.

Earlier this month, media was abuzz with intelligence reports that disclosed the plans of an Israel-India attack on the Pakistani cities of Bahawalpur and Karachi from the Indian airbase in Rajasthan. The attack that was expected to occur on 27th February was foiled by the timely measures taken by Pakistan’s defence forces. Indian warmongering attempts did not end there.

A research paper by Dr. Tughral Yamin highlights reports of a plan hatched between India, Israel, and then-Soviet Union to attack Pakistan’s military installations back in the late 1980s.

An Indian submarine was forced to retreat from Pakistan’s naval territory by the vigilant Pakistani Naval forces, and there were speculations of yet another Indian nuclear submarine attempted to breach Pakistan’s maritime territory with ballistic missiles. While Pakistan has been reasserting its stance to promote regional peace, Indian Prime Minister Modi has been lauding the Balakot strike.

It is important to note that Indian media has been touting the use of Israeli-manufactured Rafael Spice 2000 smart bombs in the alleged “strike against Jaish-e-Mohammed (JeM)” while Israel continues to align itself firmly with India’s “war against terrorism”. In his sensational analysis for The Independent, Robert Fisk establishes firm ground to explain how India and Israel have joined forces in an alliance that appears to be an “anti-Islamist coalition”.

In his article, Fisk notes, “For months, Israel has been assiduously lining itself up alongside India’s nationalist BJP government in an unspoken – and politically dangerous – “anti-Islamist” coalition, an unofficial, unacknowledged alliance, while India itself has now become the largest weapons market for the Israeli arms trade.”

In a research paper “Redefining India’s Grand Strategy? The Evolving Nature of India’s Israel Policy”, the author Nicolas Blarel notes that the New Delhi’s alliance with Tel Aviv is a strategic partnership, and India’s “relations or non-relations with Israel must not be interpreted as a strategic end in itself but as an indirect way for India to achieve (its) grand strategic objectives”.

Gen Hamid Gul highlighted Indian ambition to breach Central Asia by undermining Pakistan, and as far as Israel is concerned, “it is an artificial state, and they are afraid that they have a short shelf-life.”

A research paper by Dr. Tughral Yamin highlights reports of a plan hatched between India, Israel, and then-Soviet Union to attack Pakistan’s military installations back in the late 1980s. As we review history, the strategic military cooperation and intelligence gathering efforts between Israel and India come to light in multiple India-Pakistan conflicts, including 1965, 1971 and the Kargil war amongst other border skirmishes.

While speaking to TV anchor Faisal Rehman back in 2011, former DG ISI Gen Hamid Gul commented on the Israel-India nexus, “History is at a turning point because the economic base of the West and America is eroding, and it will not last long. Israel has chosen India as USA’s replacement, and will America’s might will decline, India will be their alternative. These desires to make India the new hegemon will not be accepted by us (Pakistan).”

Read more: Behind India-Israel alliance: The ideology and strategic philosophy

“India has committed itself to the rhetoric that if another incident like Mumbai attacks takes place, they will attack Pakistan. And Israel will be behind it (responsible for the attack), they have done it once, they can do it again. They want to see enmity and confrontation between India and Pakistan. It is in their favor”.

Keeping in mind Pakistan’s role in the Afghan Taliban-US peace talks and the current Israel-India nexus that appears to be hell-bent on going to war with Pakistan, it is interesting to note that comments made by Hamid Gul in an interview to American radio show host Alexander Emric Jones in 2011. Gen Gul warned, “The fears of Israel and the ambitions of India are now driving the American policy and this is going to hurt the American people in the long term.”

Dar explains, “Hindu India’s strategic thought is based on the idea of Hindutva and the ideology of Akhand-Bharat” or a Greater India that would include the Asian countries of Bhutan, Nepal, Pakistan, Bangladesh, and others.

He went onto term Israel as a “parasite” whose “interest must override America’s national interest”. While referring to Pakistan’s relationship with Washington, he noted that Islamabad and the ISI are “pivotal to any kind of safe-exit for America out of the region (Afghanistan).” He further noted that 9/11 was a pretext to go global with a war against terror, while the Western powers have multiple strategic interests, Afghanistan became a battlefield, and Pakistan being a self-sufficient nuclear state was also a target.

“This entire adventure (US war against terror) was to support Indian hegemony over the region (Asia), and it is not working because many Americans have lost their lives, and the tragedies of this wars are incalculable.” Gen Hamid Gul highlighted Indian ambition to breach Central Asia by undermining Pakistan, and as far as Israel is concerned, “it is an artificial state, and they are afraid that they have a short shelf-life.” He commented on Israel’s motives against Pakistan, “They think as long as Pakistan is nuclear-capable, one day, Israel may taste the wrath of Pakistan or the Muslim world.”

While speaking to Dr. Moeed Pirzada on his TV Show, senior analyst Imtiaz Gull explained the history of the strategic alliance between Israel and India. “In 1991, an Israeli tourist was killed in Kashmir, in 1992 Israel and India formally established diplomatic ties and in 1994 India began turning Kashmir’s struggle for independence into a terrorist movement with the campaign of transformation from ‘Ugarwad [separatists ]say Atankwad [terrorists]’. It was during this period that Israel and India began their counter-terrorism dialogue and joined forces to fight terrorism. Since then, 40% of all the high-tech surveillance gear manufactured by Israel for defence purposes is found in India.”

Imtiaz Gul added, “India has spent over $10 billion on purchasing surveillance gear from Israel till date. Recently, Israeli Prime Minister Netanyahu has assured India of its support in its war against terror. History reveals that the two countries are strategically aligned.”

In an interview with Russian web portal Geopolitica, research scholar Sabtain Ahmed Dar shed light on the strategic alliance between India and explained that it is not just an economic alliance, but in fact, it goes well beyond India’s position as the largest buyer of Israeli weapons. He noted that the Israel-India nexus is an “ideological alliance” that serves the purpose of achieving their underlying regional ambitions.

Dar explains, “Hindu India’s strategic thought is based on the idea of Hindutva and the ideology of Akhand-Bharat” or a Greater India that would include the Asian countries of Bhutan, Nepal, Pakistan, Bangladesh, and others. He then highlighted Israel’s ambitions to “expand their present geographical borders from the river of Nile to the river of Euphrates” to make a Greater Israel, which depict the structure of the Jewish Holy land comprising of Iraq, Syria, Lebanon, and even North-Western KSA. Dar concluded that the “denuclearization” of the Islamic Republic of Pakistan, a powerful and self-sufficient nuclear state, is an ambition that both India and Israel share.

Anti Iran Coalition: Arab countries talking with US for a military alliance