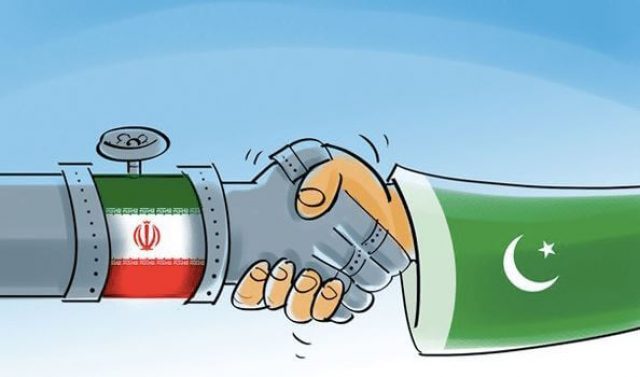 In a three-day tour of Pakistan, the Iranian Foreign Minister invited Pakistan to participate in the port of Chabahar. Dr. Javad Zarif, the Iraninan FM, also initiated discussion about the development of links between Chabahar and Gwadar.

Dr. Zarif was scheduled to meet with his Pakistani counterpart, in addition to the Prime Minister of Pakistan and other prominent ministers, address an economic forum as well as the Institute of Strategic Studies in Islamabad. While speaking at the Institute of Strategic Studies, he stated, “We offered to participate in the China-Pakistan Economic Corridor (CPEC). We have also offered Pakistan and China to participate in Chahbahar.”

These statements are meant to allay Pakistani concerns about Indian involvement in the development of the port of Chabahar. India has invested nearly $500 million in Chabahar port. The development of this port in South-eastern Iran is part of India’s strategy to bypass Pakistan and establish trade routes with the landlocked Central Asian Republics (CARs).

These land-based trade routes will, in turn, be connected with the Chabahar port. Previously, the only real way for India to gain access to CARs was through Pakistan. NATO troops in Afghanistan also get supplies through the port at Karachi. Pakistan fears that India may bypass and encircle it via what New Delhi calls the International North-South Transport Corridor.

Pakistan is also concerned about espionage and subversive activities undertaken by Indian intelligence officials that may be embedded in the staff working on Chabahar. Kulbushun Yadav is the most prominent example. Yadav, the ex-Indian navy officer, established a business in Chabahar in Iran as part of a cover to facilitate sabotage and subversion against Pakistan. An envoy from Iran at the time said that Iran was ‘very accurately’ examining the affair.

Supreme leader of Iran, Ayatullah Khameini has spoken in support of the Kashmiri freedom struggle.

In February of this year, the Iranian Prime Minister Hassan Rouhani visited India at the invitation of Narendra Modi. Rouhani’s visit spanned over three days and a number of agreements were signed between Iran and India. The emphasis of these agreements was on the Chabahar port.

A leasing agreement was also signed between Tehran and New Delhi during Rouhani’s visit, according to which India has operational control over part of the Chabhar port for the next 18 months. Although the Supreme leader of Iran, Ayatullah Khameini has spoken in support of the Kashmiri freedom struggle, Hassan Rouhani, during his tour to India, did not mention Kashmir, which is perhaps a sign of growing Indo-Iran ties.

It is interesting to note that the Iranian Foreign Minister’s visit to Pakistan coincides with the visit of the Imam of Kaab’a, who also met with the Prime Minister of Pakistan. The Imam-e-Kaaba has emphasized that the Muslim world considers Pakistan its strength. He also reiterated that Kashmir is part of Pakistan.

In February last month, Pakistan sent a contingent of troops to Saudi Arabia on a training and advisory mission as part of a long-standing defense cooperation agreement between Pakistan and Saudi Arabia. The two countries have enjoyed a close relationship for decades. Relations between Iran and Saudi Arabia, on the other hand, have remained fraught ever since the Iranian revolution in 1979. The Crown Prince of Saudi Arabia included Iran in his new definition of ‘axis of evil’. The two countries are strategic competitors in a number of theaters, most notably in Yemen, Syria, Iraq and the broader middle-east in general.

There are a number of avenues where Pakistan and Iran can improve their relationship. Both stand to benefit from enhanced border security, increased bilateral trade, banking ties and the Iran-Pakistan gas pipeline. The Prime Minister of Pakistan called on Dr. Zarif during his visit and expressed Pakistan’s commitment to resolve these outstanding issues, in particular the IP-gas pipeline that has stalled due to problems faced by the Pakistani side.

Trade between Iran and Pakistan stands at $1.2 billion. The Pakistani PM said that both countries must make their efforts to increase it to $5 billion by 2021. The central banks of both countries, the State Bank of Pakistan and the Central Bank of the Islamic Republic of Iran, need to establish ties that would allow banks from each country to expand commercial ties across the border. A statement by the Foreign Office (FO) said that the two sides agreed to continue engagement to enhance bilateral trade and investment and concluding a Free Trade Agreement on priority basis.

The two ports of Gwadar and Chabahar may become competitors in the not-so-distant future but it need not be a zero-sum game. Connectivity between the ports and mutual economic cooperation under the umbrella of CPEC can prove to be a win-win situation for both countries, provided that border policing is foolproof. This would inhibit any potential subversive activity. Two new border crossings between Iran and Pakistan also need to be properly developed as a priority.

The FO statement also added that ‘The Foreign Ministers underlined that as two brotherly neighboring countries, Iran and Pakistan, would deepen connectivity between the two sister ports of Gawadar and Chahbahar to benefit from their complementarities.’