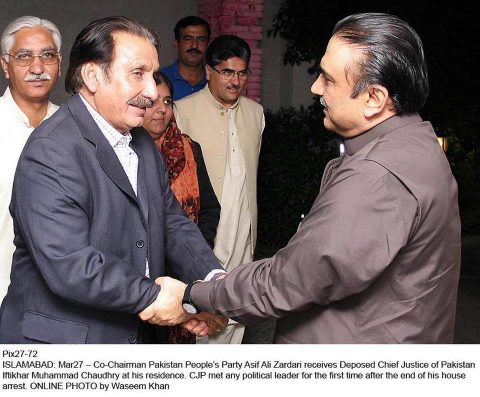 Pakistan Tehreek-e-Insaf Chairman Imran khan criticised disqualified ex-Prime Minister Nawaz Sharif over his comments in a public gathering held in Abbottabad yesterday. Imran panned Nawaz for misguiding the public over his accountability in the court of justice. He attempted to remind Nawaz of his misunderstanding that people will only judge him over corruption allegations against his family.

In a series of tweets, Imran remarked Nawaz is trying to fool people once again. It’s foolish of him to ask people to do justice (ehtesab). It is a violation of the constitution and a call for mob justice, Imran reminded. The Judiciary has the constitutional duty to perform accountability. It is akin to undermining the judicial system of this country.

Imran continued that, Nawaz is aware of the fact that all the possible avenues to secure justice are exhausted, and the constitution shows that Nawaz Sharif has no legal defence against the criminal accusation against him. No wonder, he is desperately trying to secure his allegedly illegal Rs. 300 billion wealth laundered abroad.

So it is Judiciary that has constitutional duty of ehtesab. NS trying to stir ppl into doing his ehtesab is also a violation of constitution & a call for mob justice. Undermining the judiciary and the Constitution shows NS has no legal defence ag the criminal charges against him https://t.co/T3iGUHHDck

Imran through tweets is trying to sustain pressure and expose Nawaz’s real agenda. With no settlement in sight, Nawaz is contemplating future through threatening rhetoric.

Post GT road rally, Abbottabad was his first mass contact campaign to engage with the public after disqualification.  Hamza Sharif’s visit to his constituency NA-119, Maryam Nawaz’s visit to NA-120 and Nawaz Sharif’s presence in Abbottabad depicts the unexpected scenario, which has put the family in jeopardy. It seems Nawaz is out of options.

Now NS and the Sharif mafia are desperate to use all extrailegal means to save his Rs 300 bn laundered and stashed abroad. https://t.co/Cs0oIYEEIM

Firstly, the house of Nawaz is under tremendous pressure as NAB continues its criminal proceedings against them. After apparently exhausting all the options, Nawaz is seeking support from masses. Since the cases in the Accountability, Court appears to be strong, and his legal team has apparently remained largely ineffective to convince the judges with solid proof of wealth stashed abroad. Nawaz has no alternative but to consult his most potent weapon, the people of Pakistan, particularly from Punjab.

Secondly, PTI has launched its election campaign. Imran tirelessly travelled across Punjab to engage with the public and to unmask the failed policies of the PML-N government. PTI is trying to create a momentum for next general elections. Nawaz is aware of this fact. He launched his counter-attack policy to stop Imran’s ascendance.

Moreover, Nawaz is aware of the fact that friends in England, United States and Kingdom of Saudi Arabia may not be able to help him, in case of weak defence and substantial evidence in the court of justice.

Though, Nawaz allegedly secured the services of the lobbyist in the Washington, in an attempt to create a similar pressure, which Benazir put on Musharraf through Condoleezza Rice which facilitated the NRO.  But, thus far, he is unable to find a way out of the present situation, which potentially could undermine his status and wealth hoarded in Western countries. Diluting the effect of the Panama judgment is what Nawaz wants. Imran’s continuous rhetoric on Nawaz’s alleged corruption and NAB’s tactics are worrisome for Nawaz.

So far, he is unable to defuse the intensity and pressure created at the moment. Failed attempts to club the three-references into one and NAB’s recommendations to put Hassan and Hussain on ECL have further escalated the pressure on Nawaz.

The cases in the Accountability, Court appears to be strong, and his legal team has apparently remained largely ineffective to convince the judges with solid proof of wealth stashed abroad.

Moreover, currently, the tense political situation cannot allow them a breather, and he is unable to buy time but has shown defiance through loud and clear public engagements. Imran through tweets is trying to sustain pressure and expose Nawaz’s real agenda. With no settlement in sight, Nawaz is contemplating future through threatening rhetoric. He has adopted a smart strategy to tackle the crises. Amid accusations and never-ending war of words hurled at each other, who will succeed in this game of thrones is unclear.