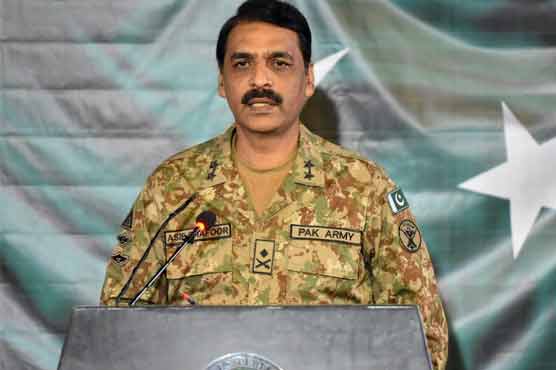 On Monday, the Inter-Services Public Relations (ISPR) issued a statement to rubbish Indian claims of shooting down a Pakistani F-16 and the US-Indian protests over the use of F-16 in the dog fight that ensued on 27th February in the wake of the Pulwama attack. The statement by ISPR stated that the events that occurred on 27th February are a “part of history now” and clearly mentioned that “no Pakistani F16 was hit by Indian Air Force”.

The statement noted that the Pakistan Air Force (PAF) action against the Indian strikes was conducted by the Pakistani-Chinese manufactured JF17 from within the Pakistani airspace, and later, two Indian jets were shot down by the PAF after they crossed the LOC and entered the Pakistani airspace. The statement notes, “Whether it was F16 or JF17 which shot down 2 Indian aircrafts is immaterial. Even if F-16 have been used as at that point in time complete PAF was airborne including F16s, the fact remains that Pakistan airforce shot down two Indian jets in self-defense.”

New Delhi then took up the issue of Pakistan’s use of the F-16, presented with “critical evidence” that reveals how Pakistan has breached its agreement with the US and used the F-16 in an offensive attack.

The statement further highlights Pakistan’s legitimate right to self-defense and its authority, as a sovereign nation, to choose whatever weapon it deems fit to safeguard its borders. ISPR stated, “India can assume any type of their choice even F-16. Pakistan retains the right to use anything and everything in its legitimate self-defense.”

Director General ISPR has persistently clarified that while the F-16 were airborne, it was the JF-17 that were used to engage and fighting the Indian targets. Indian officials have claimed that they have electronic evidence of shooting down a Pakistani F-16, but no such evidence has materialized so far. New Delhi then took up the issue of Pakistan’s use of the F-16, presented with “critical evidence” that reveals how Pakistan has breached its agreement with the US and used the F-16 in an offensive attack.

While speaking to Sputnik last week, DG ISPR noted Islamabad’s “friendly relations” with the United States but made it clear that on matters of “legitimate self-defense” Pakistan would not be dictated on its choice of weapon. He said, “The aircraft which engaged those targets and fought them were JF-17. As regards to how to use F-16, in what context they were used or not — because at that point of time our entire Air Force was airborne — now it remains between Pakistan and the US to see how the MoUs regarding the use of F-16 have been adhered to or otherwise.”

India’s “critical evidence” consisted of blown up parts of an AMRAAM missile, which is being touted as evidence that “conclusively” proves Pakistan’s deployment of F-16s during the dog fight that ensued on 27th February. While speaking to the Express Tribune, Air Commodore (R) Jamal Hussein specified that the nature of an AMRAAM missile is such that it does not “disintegrate” in the manner in which the Indian security forces have shown it.

The anti-Pakistan rhetoric continues to soar in New Delhi as BJP leaders continue to flaunt PM Modi as the great leader who has the “political resolve” to undertake military action against Pakistan.

He said, “The problem with presenting a missile shard is that an AMRAAM does not fragment unless it hits a target. This is correct, if an AMRAAM were to miss its target, it would fly until it ran out of fuel and then drop to the ground.” Air Commodore (R) Hussein noted that in case of a crash, an AMRAAM would suffer damage but it would still be “largely intact”.

While speaking to Asia Times in a detailed report on the Indian fake news of downing a Pakistan F-16, an Indian Air Force officer made similar statements on the mechanisms of an AMRAAM. He noted, “When a missile hits a jet it breaks down into small pieces just like the aircraft it targets – it doesn’t vaporize. If it doesn’t hit the target, its rocket fuel finishes in 20-25 seconds, and it just falls down on the ground intact.”

While speaking to Asia Times, Retired Air Commodore Kaiser Tufail, a former PAF F-16 fighter pilot author of Great Air Battles of Pakistan Air Force, commented on the lack of evidence put forward by Indian air force despite the mechanisms to provide audio and video recordings. Tufail observed that the trace of ground and airborne radar scope is recorded and preserved by all radars for 72 hours, and India could not present better evidence that these recordings.

Retired Air Commodore Tufail noted, “The IAF can provide an audio recording of the interception in which the (MiG-21) pilot must have transmitted to his flight controller. There would be ‘radar contact,’ ‘visual contact,’ target shot down.’ These recordings should be available with the ground radar as well as the airborne radar that was flying that day.” It is important to note that the MiG-21 is equipped with cameras in the guns and missile pods that allow the pilot to make audio and video recordings of air engagements, hence, if India had indeed shot down a Pakistani F-16, it should have been able to provide concrete evidence.

On Tuesday, the ISPR reported the martyrdom of three soldiers of the Pakistan Army who lost their life after “unprovoked firing” from the Indian security forces from across the Line of Control, in the Rakhchikri sector of Rawalakot. The martyrs have been identified as Subedar Muhammad Riaz, Lance Hawaldar Azizullah and Sepoy Shahid Mansab. The ISPR reported that the Pakistani forces gave a befitting response to the Indian aggression and there have been reports of casualties on the Indian side of the border.

If India intends to urge the US to pressurize Pakistan to adopt measures of non-proliferation, New Delhi’s efforts are likely to be met with a powerful resolve on Pakistan’s “legitimate self-defense”.

Indian media is abuzz with reports of two Pakistani F-16 fighter jets spotted hovering near the border on Monday, in the Khemkaran sector of Punjab. In response, the Indian Air Force allegedly scrambled two Sukhoi-30 fighter jets after a “Pakistani unmanned aerial vehicle (UAV)” was spotted over the border. Indian media reports suggest that this episode did not escalate as the Pakistani drone retreated.

The anti-Pakistan rhetoric continues to soar in New Delhi as BJP leaders continue to flaunt PM Modi as the great leader who has the “political resolve” to undertake military action against Pakistan. In an exclusive interview to Economic Times, BJP President Amit Shah reinstated India’s alleged destruction of terrorist camps in Pakistan. Shah stated, “The BJP government under Modi has gone into Pakistan and destroyed terrorist camps, whether it was after Uri or Pulwama. Until now, there were only two countries, which took revenge of martyrdom of their soldiers – US and Israel. Because of Modiji, India is now the third country to do so.”

On Monday, the Indian Army Chief Bipin Rawat began his five-day tour to the US, where he is expected to meet the US Army chief to discuss “counterterrorism cooperation with the US”. A report by Economic Times indicates that Indian Army Chief has undertaken this tour to discuss tackling “Pakistan aided terrorist activities in the region”.

If India intends to urge the US to pressurize Pakistan to adopt measures of non-proliferation, New Delhi’s efforts are likely to be met with a powerful resolve on Pakistan’s “legitimate self-defense”. While speaking to Sputnik, DG ISPR stressed that Pakistan will be willing to undertake measures of non-proliferation of nuclear weapons, as long as equality is exercised and India is willing to do the same. While referring to US allegations on Pakistan and its continued efforts to arm India with state of the art nuclear weapons, DG ISPR asserted, “You cannot tie the hands of Pakistan and keep India open. Anything that happens should happen for both countries”.