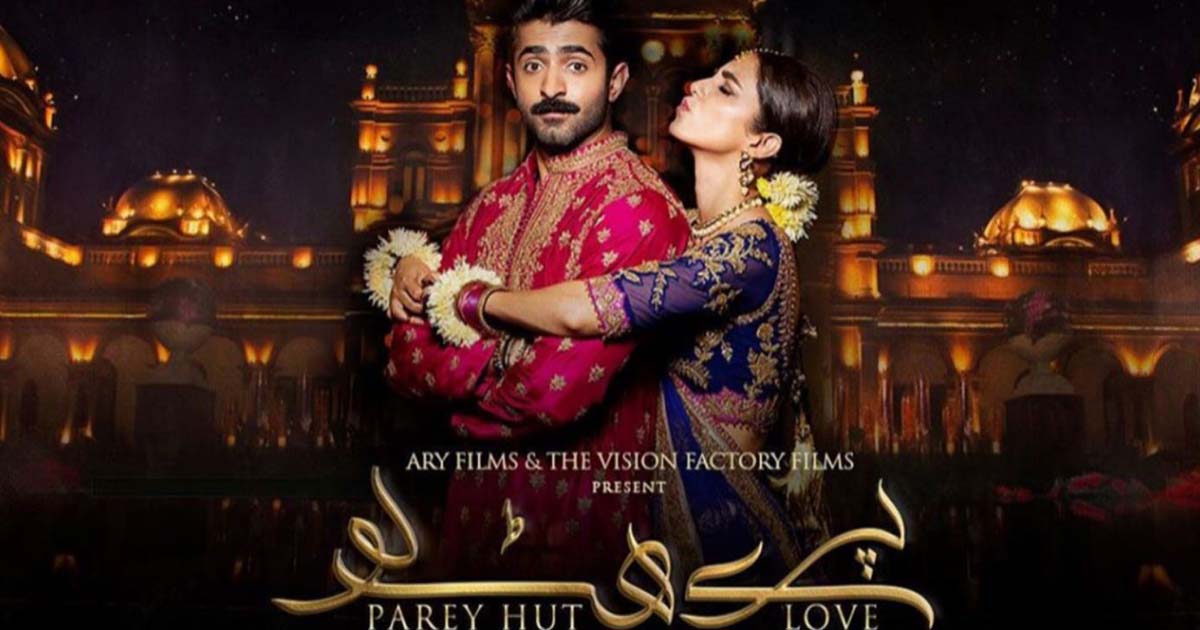 Asim Raza’s Parey Hut Love, released this Eid ul Adha, marks a welcoming return for the director. Raza’s last film, Ho Mann Jahan, was a decent enough offering and this time the director returns with the film’s star Shehreyar Munawar to deliver a film that is likely going to win hearts.

Parey Hut Love doesn’t break new ground; with Imran Aslam’s generic script bringing down an otherwise well cast and produced the film. There is a line in the film where our hero Shehreyar complains about the Pakistani culture being obsessed with weddings.

And although true, there is some irony in the target audience for this film being just those people. That is likely why the producers decided to more or less adapt Four Weddings and a Funeral and give it a desi twist. And if you’re the type who enjoys weddings and seeing them on the big and small screens, Parey Hut Love is exactly what you’re looking for.

If the film feels tired and worn out well before the credits roll, it’s because there is nothing of note in the movie. Granted, Parey Hut Love is an exceptionally pretty film. The director and cinematographer certainly managed to pick and shoot some beautiful locations and even the sets have luminous energy to them, which is rare in our films.

The weddings each look different from one another and the colorful vibrant settings help pass the time when other aspects of the film fall awfully short. There is a lot about the film that works though, and it is largely due to Parey Hut Love being an ambitious endeavor to begin with.

Leading lady Maya Ali fares a little better. While she too can’t save the film with its lack of a decent script, Ali does steal the film with her captivating performance

The film heavily draws inspiration from the yesteryear Bollywood films as well as the cozy British rom-coms, such as the one it is adapting. But the movie also is quite striking at times because of how much effort has been made to make each and every scene look better than the previous one.

Armed with a talented and gorgeous duo in Munawar and Maya Ali, Raza is smart about how he uses his actors, making sure that they look their best even when having breakdowns or getting into cheesy fights.

Read more: Mahira in awe of Meera for cameo in ‘Parey Hut Love’

The story revolves around a struggling actor, Shehreyar, who meets a girl at a wedding and is instantly enamored with her. The rocky relationship between the two, which seemingly springs out of nowhere (in the typical Pakistani-Indian film style), is the focus of the film as the duo’s relationship changes through the events that transpire during the four Weddings and a funeral.

The premise itself isn’t inherently flawed and it is no wonder that it has been the subject of two adaptations this year, Parey Hut Love and an American streaming series that kept the film’s name but was no more successful than this movie in matching the innate charm of the 1994 classic.

Sherehyar Munawar, who is also the producer of this show, makes sure that he has a role worthy of his caliber and while the script itself is clunky, there are some good character beats for Munawar to show off his considerable range.

His namesake character is a rarity as he isn’t the tough macho hero we are used to seeing (something the Hugh Grant’s Four Weddings also shared), and is sensitive and not afraid to shed a few tears in the solace of his room. Too often though, his performance veers on becoming a little too dramatic.

The weakness of the script and the story itself is particularly highlighted in the chuckle-inducing dramatic scenes in the movie. But given that the last movie role of Munawar was Project Ghazi, this is a step up by all means. Leading lady Maya Ali fares a little better.

Read more: The Future of Pakistani Film Industry & The Need for an Identity

While she too can’t save the film with its lack of a decent script, Ali does steal the film with her captivating performance as Saniya. Ali’s star is quickly rising among the pantheon of A-List TV actors and with Teefa in Trouble proving to be a sizable hit, and Parey Hut Love, likely to do well at the box office as well, she is charting a path for even greater stardom.

From her performance in the film, it is easy to see why it is going so well for her. Simultaneously sweet, audacious and clever without seeming too perfect, Ali does a good job with her character.

Unfortunately, the supporting actors aren’t given enough to make their roles click and as a result, some truly talented Pakistani actors are on the short end of the straw with regards to their roles. Hina Dilpazeer, Ahmed Ali Butt, Nadeem Baig and relative newcomer Zara Noor Abbas don’t have much to add to the film.

A constant flaw in the crop of recent Pakistani films is the lack of good scripts and Parey Hut Love suffers due to its poorly written one. Still, the film features decent performances from its talented actors and looks better than the majority of films that come out from our side, making for an overall pleasant viewing experience.

US sanctions Pakistani companies to set stage for NSG Meeting in April?

Uncertainty in Kashmir after India’s revocation of Article 370