When two decades ago, U.S. President Bill Clinton characterized Kashmir as the "most dangerous place on earth" he may not have realized how prescient his words would remain – 21 years later, Kashmir continues to stoke fires between two nuclear-armed nations.

Around 3:15 pm on February 14, 2019, a car, packed with around 80KG RDX explosives rammed into the Indian convoy of 78 buses carrying 2,500 Indian paramilitary police of the 76th Battalion in Pulwama – on the heavily guarded Srinagar-Jammu highway.

The suicide attack that killed more than 40 officials of the Central Reserve Police Force (CRPF) was carried out by a young 22-year-old Kashmiri from Pulwama, Adil Ahmad Dar. Two blue buses carrying around 35 people each bore the brunt of the explosion around 20 kilometers from Srinagar on the main highway towards Jammu.

Was Pulwama merely the work of a desperate and young Adil Dar or it was a “manufactured event” to provide a pretext for establishing a “New Norm” in South Asia, before Indian general elections, is not clear

Adil’s story was disturbingly familiar and shared by his parents; he grew up under the shadow of guns and was radicalized a few years earlier when he was savagely beaten up by Indian troops on his way home after school one day. Later in 2016, Adil partook in the protests after the assassination of the young Kashmiri leader Burhan Wani.

He was shot in the leg by troops and remained bedridden for eleven months. His cousin Manzoor was also killed in June 2016 by Indian forces. His father, Ghulam Hassan Dar, was quoted in a BBC report, “That day changed him, a shy boy transformed into a volcano of anger, but he rarely expressed it.”

A relatively unknown Kashmiri faction of the Jaish-e-Mohammad in Indian occupied Kashmir released a videotape in which Adil Dar took credit for what he was about to do. Without conducting any investigation, India immediately blamed Pakistan the same day and said the explosives had come from across the border.

“It is not possible to bring such massive amounts of explosives by infiltrating the border,” The New York Times quoted Indian Lt. Gen. D.S. Hooda, an army commander, as saying immediately after the incident. Gen Hooda had said that the material might have been taken from stashes of explosives being used to blast a mountainside to broaden the highway to Jammu, the same road where the attack occurred. 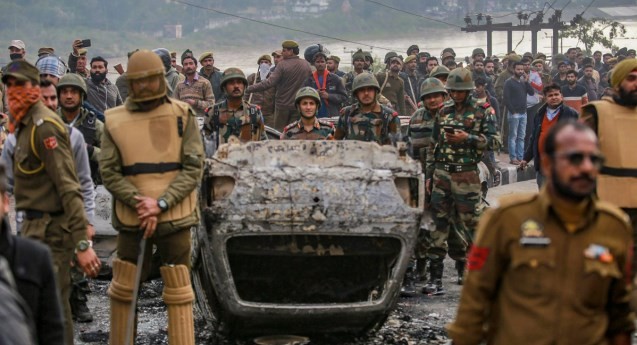 In a later interview, the NYT stated, the Gen deviated from his earlier statement, saying he was not ruling out that the explosives had come from Pakistan but asserting that it would be tough to smuggle in that much material. Many in Pakistan suspected the timing of this tragedy – a few weeks before India’s general elections due in April where anti-Pakistan emotions sell.

Foreign Minister Shah Mahmood Qureshi had remarked that “violence is not the policy of his government,” noting that India “took one minute” to blame Pakistan. While condemning the attack, Qureshi had said that the contrary voices coming from within India should be heard, as many considered that placing blame on Pakistan was the easy route. He, however, reminded India that a reaction to the rape of Kashmiri women and the use of pellet guns had to be expected at some point from local Kashmiris.

Adil’s story was disturbingly familiar and shared by his parents; he grew up under the shadow of guns and was radicalized a few years earlier when he was savagely beaten up by Indian troops on his way home after school one day

PM Imran Khan had not only offered a joint probe but had also promised action on any actionable evidence given by India. India had then dispatched a 12-member team from its National Investigation Agency (NIA), but to this day, 12 months later, it has not been able to release any evidence to substantiate its accusations against Pakistan.

Was Pulwama merely the work of a desperate and young Adil Dar or it was a “manufactured event” to provide a pretext for establishing a “New Norm” in South Asia, before Indian general elections, is not clear. However, the reaction of key western countries was surprising if not altogether “irresponsible”.