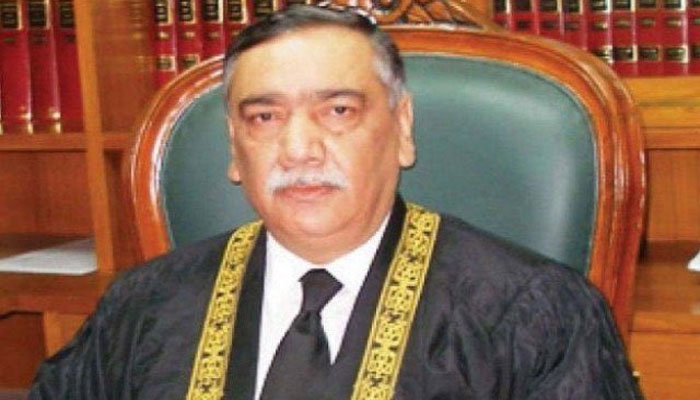 At the stroke of midnight, on Thursday, the contentious judicial era of Chief Justice (Retd.) Mian Saqib Nisar came to an end. And on Friday, Pakistan welcomed its 26th Chief Justice of the honourable Supreme Court, Mr. Asif Saeed Khosa, CJ.

Chief Justice Khosa is frequently regarded as one of the most erudite judges on the honourable bench. Throughout his judicial career, spanning more than two decades, Justice Khosa’s judicial mettle has been tested several times – in cases such as dismissal of PM Yousaf Raza Gillani, Mumtaz Qadri’s conviction, Asia Bibi’s acquittal, and the disqualification of Nawaz Sharif (without recourse to the JIT) through his judgment dated 20th April 2017. And in each of these (and other judgments), Justice Khosa has not only decided the issue at hand but also furthered the arc of our jurisprudence.

For this purpose, he hinted at the introduction of new technological methods and creation of a “three-tiered” judicial system that reduces unnecessary litigation and delays.

But intellect, alone, may not be sufficient to confront the many challenges that await the new Chief Justice in such turbulent politico-judicial times. And no one is more aware of this fact, than Justice Khosa himself.

In his inaugural speech (delivered during Full Court reference for CJ (Retd.) Saqib Nisar), Justice Khosa outlined his vision and plans for the (brief) time that he holds the office of the Chief Justice. Distancing himself from the activism of his predecessor, Justice Khosa declared that he will “very sparingly” exercise his powers under 184(3) of the Constitution, and will also make attempts to determine the “scope and parameters” of such power.

Just as importantly, he declared his intention to build “a dam against undue and unnecessary delays in judicial determination of cases” and retire the “debt of pending cases”. For this purpose, he hinted at the introduction of new technological methods and creation of a “three-tiered” judicial system that reduces unnecessary litigation and delays. Also, he endeavoured to seek legislative amendments in our procedural law and appealed that the government must increase the existing number of judicial officers (only 3,000) who have been tasked to decide almost 1.9 million cases.

In the larger scheme of governance, he also expressed his desire to seek a broad-based “Charter of Governance” that includes consultation with “top parliamentary leadership, the top judicial leadership and the top executive leadership including the military and the intelligence agencies.” (More on this, some other time). Truth be told, notwithstanding his noble ambition, Justice Khosa tenure as the Chief Justice is too short to realize all of these goals. As a result, perhaps a few important (judicial) issues need his immediate attention.

CJ Khosa, with the help of the respective provincial HC judges and Bar Councils, must find a way to rescue the bench from being held hostage by (certain members of) the bar.

The real test for Justice Khosa and his legacy as CJ will largely depend on how he redeems our national faith in the (tainted) project of justice. CJ Khosa inherits a Court that is torn between aspirations of grandeur, and the humble responsibilities of dispensing justice in accordance with law. On the one hand, there are those who see the court as the ‘fix all’ institution in our society; those who invite the Court to embrace the role of a ‘saviour’, even if that means stepping outside the contours of black-letter law.

On the other end of the spectrum is the belief that the honourable Court must jealously guard the precarious balance of constitutional separation of powers, instead of attempting to orchestrate revolutions from the bench. And CJ Khosa will have to walk this thin rope, all the while cognizant of the fact that he is being watched through the gaze of history.

As such, to begin with, in order to restore people’s faith in our judicial system, concerted steps must be taken to minimize the procedural delays of litigation. In this regard, Justice Khosa is correct in pointing out that our procedural laws must be revisited, and a deliberate three-tiered trial and appellate process be developed, with consequences for a delay and frivolous litigation, so as to provide inexpensive justice within a calculable timeframe. Furthermore, renewed efforts must be made for better supervision of the subordinate courts, increased use of technology, and development of pre-trial procedures to alleviate unnecessary delays.

Away from procedural issues, the honourable Court must make efforts to nurture the development of meaningful jurisprudence at the trial stage. There is no reason why the trial process – at the criminal as well as civil side – continues to be mechanical in nature, with no new judicial ideas seeping into the trial judgments. All across the world, a large fraction of jurisprudence, especially concerning procedural and evidentiary matters, emanates from trial courts. Through a better training of judicial officers, our trial jurisprudence must be improved, so as to reduce the burden of the appellate courts.

In this regard, a more transparent process of judicial nominations, under Article 175A, must be developed, so as to silence all allegations of bias and nepotism.

Next, judiciary – especially in the district courts – must be protected against the incursions of ‘wukulagardi’. CJ Khosa, with the help of the respective provincial HC judges and Bar Councils, must find a way to rescue the bench from being held hostage by (certain members of) the bar. The likes of Sher Zaman can no longer be tolerated within our ranks.

Events such as the locking of court premises and thrashing of district court judges must be punished to the fullest extent of our (criminal) laws. Our constitutional courts, and in particular the Chief Justice, can no longer remain impotent, while hooliganism persists in the district courts. Under the leadership of CJ Khosa, legal fraternity must be taken to task for its persistent tampering with the system of justice.

Also, Justice Khosa is correct in stressing the importance of developing ascertainable contours for the exercise of its powers under Article 184(3) of the Constitution. There is no reason for the Court to be embroiled in controversy concerning why PTI’s petitions (against Panama Leaks) were initially rejected by the Registrar, only to be accepted later (under public pressure?). Why the proverbial “two bottles” of Atiqa Odho were sufficient to trigger the exercise of such powers, but calamitous terrorist events are not.

It is time that the honourable Court ends this persisting suspense about what constitutes an issue of ‘public importance with reference to the enforcement of fundamental rights’, and lays down judicious criteria for the invocation of this power. This will not only infuse greater moral authority in judicial dicta but will also silence criticism about (allegedly) discriminatory use of such power, especially when it comes to adjudicating political questions.

While on the point, a greater sense of transparency and accountability must also be infused in the elevation and functioning of the superior judiciary. In this regard, a more transparent process of judicial nominations, under Article 175A, must be developed, so as to silence all allegations of bias and nepotism. Also, Supreme Judicial Council, which has sparing exercised its powers, must dispose-off the pending references, in a systematic manner, in order to ensure that “justice is being manifestly seen to be done” in our land.

And perhaps most importantly, the new CJ must take measures to regain the constitutional ground that has been surrendered to the aberration of military courts. Specifically, the responsibility of trying terrorism suspects must revert to an empowered civilian judiciary that has the courage and tools to convict the scourge of terrorism, in a timely and efficient manner.

For this purpose, the honourable Supreme Court, under its new leadership, must develop fresh standards of proof, evidentiary requirements, and procedural contours, for trying militants that persistently escape the porous clutches of our existing criminal justice system.

These are tough times for Pakistan, and especially troubling times for our judicial enterprise. Critical questions concerning fundamental rights, separation of powers, political autonomy, civil-military imbalance, and judicial authority will need to be arbitrated by the honourable Court.

For this purpose, all of us will be looking towards Justice Khosa, and his Court, for guidance and reprieve. Consequently, let us wish Justice Khosa the very best in his new responsibilities, with a prayer that he helps us achieve the fullest promise of our constitutional enterprise, without any respite to those who seek to destroy the fabric of our peaceful society.

IS launches a major attack in eastern Syria