The Paris Meeting: Always a foregone conclusion for Pakistan?

Dr. Waqar Masood, ex-finance secretary, examines the background and implications of Pakistan being dragged in the grey list of FATF. He argues that this is not a professional but a political decision and was inevitable given the tensions with the Trump administration over Afghanistan.

The Financial Action Task Force on Money Laundering (FATF) was established by the G-7 Summit held in Paris in 1989. The initial task force consisted of the G-7 member States, the European Commission and eight other countries.

The FATF currently comprises 35 member jurisdictions and 2 regional organizations (European Commission and Gulf Co-operation Council). From the South Asia region only India is a member. Israel and Saudi Arabia have observer status to the organization. Pakistan is a member of the Asia/Pacific Group on Money Laundering (APG), which is an Associate member of the FATF.

The FATF blacklist refers to the list of “Non-Cooperative Countries or Territories” (NCCTs), which it has defined as being non-cooperative in the global fight against money laundering and terrorist financing. Currently, only two countries are on the list: Iran and Republic of North Korea.

A country placed on the FATF black list faces severe sanctions, it makes it difficult for such countries to obtain any foreign loans or foreign direct investments.

ATF identifies the countries that have strategic AML/CFT deficiencies for which they are asked to develop an action plan to resolve. Currently, the following countries are on the FATF grey list: Ethiopia, Iraq, Serbia, Sri Lanka, Syria, Trinidad and Tobago, Tunisia, Vanuatu and Yemen.

Being placed on the grey list can make it difficult for a country to obtain foreign aid and funds as foreign investors resistance has to be overcome. Sometimes it can also result in sanctions from other economic institutions like the International Monetary Fund. Pakistan was on this list between 2008-10 and again in 2012- 15.

The case of JUD-FIF has posed unique complex challenges. The fact of the matter is the available evidence against them is scant. The US has announced a bounty on Hafiz Saeed and he has been put behind bars many a time in the past but has been released by courts, including the Supreme Court.

However, during these periods it managed to raise funding from capital markets and successfully completed IMF program.  Will be placed back on this in June 2018 as the FATF task force highlighted deficiencies in the (AML/CFT) framework of Pakistan. Miftah Ismail, finance advisor said the country was placed on the greylist on the insistence of the US and India.

“They wanted to embarrass Pakistan rather than curbing money laundering and countering terror financing. In reality, stringent anti-money laundering laws are already in place in Pakistan”. reports on suspicious transactions to the FMU, if they have reasons to suspect that the transactions are proceeds of crimes. 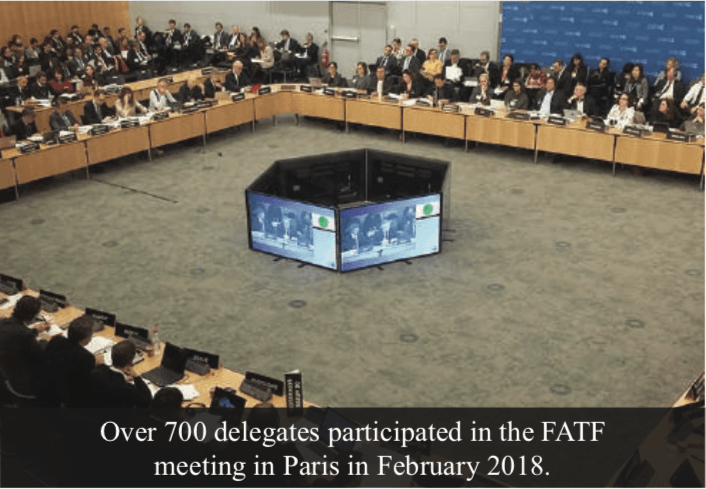 After due scrutiny, the FMU then decides to transmit the suspicious transaction report (STR) to various agencies responsible for taking cognizance of the predicate offense. Another report by FMU is currency transaction report (CTR), which tracks the movement of cash beyond a prescribed limit.

The law also provides a detailed architecture for investigation and prosecution of money laundering offenses, the jurisdiction of courts, procedures to be followed, including the procedure for grant of bail to the accused.

The Anti-Terrorist Act (ATA) 1997, did not address the subject of financing for terrorism. The second amendment to this Act, in 2014, filled this gap by adding a new offense in ATA that relates to providing financial support to someone who engages in terrorist activities.

Like others, Pakistan also faced domestic challenges to instituting an internationally acceptable AML-CFT regime. The failure led, in 2012, to Pakistan’s placement on the watch list that required close monitoring. It was referred to a peer group called Asia Pacific Group (APG) to work on improving its regime.

The second amendment to this Act, in 2014, filled this gap by adding a new offense in ATA that relates to providing financial support to someone who engages in terrorist activities. Besides, there was the issue of going after proscribed entities and individuals engaged in terrorism.

With the help of APG, a large number of steps were taken by the present Government to remove the deficiencies identified by mutual evaluation methodology. These efforts were successful as Pakistan was removed from the watch list in 2015.

On 11th February 2018, the President promulgated an Ordinance further amending the ATA, 1997. New provisions have been added enabling the Federal Government to freeze, seize and manage properties, assets and charitable works of banned organizations and individuals. Rules under the law were immediately framed and necessary action of taking over properties, assets and operations have been done.

Read more: Pakistan to be placed on FATF’s grey list in June: Confirms…

The Paris meeting of the FATF has caused much anxiety in the public. But the fact of the matter is that what we witnessed in Paris was realpolitik. A forum supposedly dedicated to enhancing the integrity of the global financial system against ills of money laundering and terrorism finance has been used by some powers for purposes not consonant with the aims and objectives of FATF.

The business of FATF is serious and sombre. It should not be reduced to parti pris politics at the UNSC. India is a member of FATF and frequently uses its proximity to the US to pose undue challenges for Pakistan. The Indian-US duo again worked against Pakistan in Paris. It may be underlined that Pakistan has an AML-CFT regime that is comparable to international best practices.

The FATF Statement in February 2015 had the following to say when removing Pakistan from the grey-list: The FATF welcomes Pakistan’s significant progress in improving its AML/CFT regime and notes that Pakistan has established the legal and regulatory framework to meet its commitments in its action plan regarding the strategic deficiencies that the FATF had identified in June 2010.

Pakistan is therefore no longer subject to the FATF’s monitoring process under its on-going global AML/CFT compliance process. Pakistan will work with APG as it continues to address the full range of AML/CFT issues identified in its mutual evaluation report, in particular, fully implementing UNSC Resolution 1267.

The actions taken by Pakistan were not given due consideration. Unprecedentedly, the US State Department chose to hold a press conference announcing its resolve to move a resolution for placing Pakistan in the terror-financing watch list. The hype and frenzy generated by this message were scary.

International media, especially Indian, ran stories of doom and gloom falling on Pakistan in the aftermath of the FATF designation. But we made grievous errors as well. First, the required amendment in the law, even though a correct step, was ill-timed and was thus misconstrued as a half-hearted effort.

Second, and perhaps more importantly, there was a premature announcement of victory from a high government official saying Pakistan has survived the challenge with the help of its friends who voted down the US proposal of placing Pakistan on the Watch List.

Advisor Finance has said that this development would not have any adverse implications on the economic outlook of the country. Yet, it tarnishes our image and hurts the efforts we have made in introducing a robust AML-CFT regime in Pakistan. However, a positive development against the backdrop of this unpleasant episode was that Ms. Lisa Curtis.

Understandably, those who had earlier agreed to take a more sympathetic view of Pakistan’s progress and showed readiness to give more time for the results of new steps to take hold, were outraged on such an audacious claim from Pakistan. No amount of regret and consolation, afterwards, was good enough.

Under the circumstances, strong-arm tactics were employed to steam-roll the outcome. Miftah Ismail, Pakistan’s Advisor Finance, who was leading Pakistan’s delegation, was at pains to explain to Reuters: ‘Washington did not seem genuinely eager to see Pakistan boost its terrorist financing regulation and was instead bent on humiliating the country.’

Implications of Paris Meeting: The UNSC Resolution 1267 has been a big challenge for Pakistan. However, here also we made progress as we expanded the list of proscribed entities (60) and individuals (8000 plus), including those from the UN and froze their bank accounts.

The case of JUD-FIF has posed unique complex challenges. The fact of the matter is the available evidence against them is scant. The US has announced a bounty on Hafiz Saeed and he has been put behind bars many a time in the past but has been released by courts, including the Supreme Court.

Notwithstanding, in January 2018, JUD and FIF were placed by the government in the list of proscribed organizations under the Anti-Terrorism Act (ATA), 1997. The ATA was further amended to automatically include all those listed in the UNSC resolution 1267.

Additionally, the Cabinet also approved the Anti-Terrorism (Freezing and Seizure) Rules, 2018, enabling the authorities to freeze and seize assets outside the financial sector also and other required restrictions.

Some actions were taken against FIF – stopping them from collecting donations, running charitable organizations, providing ambulance services etc., which have been taken under government administration – a key American demand. However, the government is as they say between a rock and a hard place as the challenge remains for the government how to defend these actions in the court of law as the ATA Act provides appeal and review provisions.

Advisor Finance has said that this development would not have any adverse implications on the economic outlook of the country. Yet, it tarnishes our image and hurts the efforts we have made in introducing a robust AML-CFT regime in Pakistan. However, a positive development against the backdrop of this unpleasant episode was that Ms. Lisa Curtis, Director, NSC has visited Islamabad.

When passions cool down, it would be time to reengage with the US to allow them to examine the steps we have taken that would indeed go a long way to dispel their misgivings. Similarly, other friendly countries should also be taken into confidence. The Chinese Foreign Office statement should help clarify the apprehensions about its unflinching support for Pakistan.

A move towards digital banking