Who is sabotaging Afghan peace agreement

Looking forward, the regional stakeholders must beware of Indian efforts meant to sabotage the Doha agreement for peace in Afghanistan. 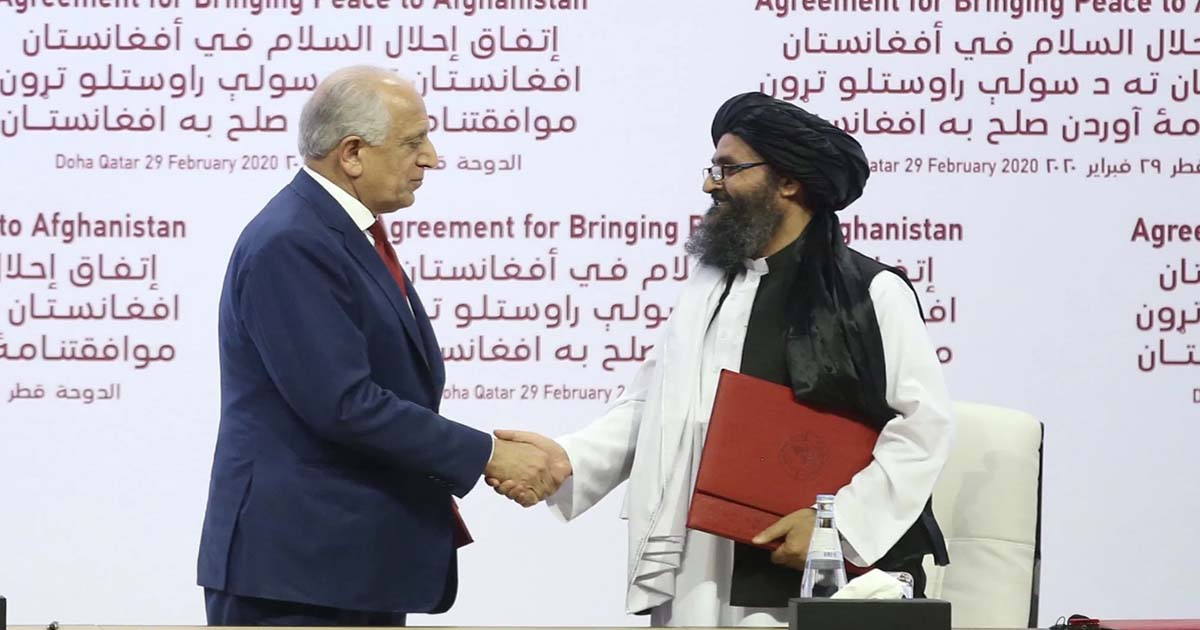 There is more or less no doubt left that after a gap of nearly two decades, the world is again looking forward to a major power reshuffle in Afghanistan. Taliban, who were expelled from power-corridors of Kabul by a US-led military invasion post 9/11, have re-emerged as the most dominant faction in the Afghan political arena.

Contrary to mid-nineties, the Taliban in 2020 have somewhat evolved from hardcore right-wing extremist organization to military and diplomatic might, that controls more than 70% of Afghanistan’s land area. Taliban today are branding themselves as a symbol of Afghan nationalism, by promoting ethnic minorities such as the appointment of Mawlavi Mahdi, a Shia Hazara as group’s governor for the Balkhab district. These steps clearly indicate that the Taliban want to change their previous perception of terror-sanctuary to an ethnically diverse regional stakeholder.

India now has a serious strategic and diplomatic challenge as the Taliban appears to make a comeback in the power spectrum. Despite being the second biggest donor of foreign aid, India merely watched the whole negotiations and signing of Afghan peace deal from sidelines. India was also not mentioned in the Taliban’s head of diplomatic delegation in Doha Mullah Abdul Ghani Baradar’s “thank you” list which included China, Russia, Iran, and of course Pakistan, which was specially mentioned.

Additionally, Sher Muhammad Abbas Stanikzai, the group’s political chief said in an interview that “India has always played a negative role in Afghanistan. India supported traitors in the country.” Many experts in India believe that another dark period looms ahead as the United States is ready to pack its bags from Afghan soil. “The US-Taliban deal is widely seen in India as a victory for the Taliban and Pakistan,” Sudha Ramachandran, an analyst on South Asian politics and security based in Bangalore, told DW.

Regional anti-India sentiments on the rise

There are growing anti-India sentiments in the region stretching from Iran whose Supreme Leader accused India of massacring Muslims, to Nepal which issued a new political map claiming Indian territories and China with whom India’s tensions are leading to the verge of war. From New Delhi’s discriminatory citizenship law to imposing lockdown on Kashmir and growing Islamophobia in the country, India is losing its only so-called ally Afghanistan. The anti-Muslim riots in Delhi sparked a huge protest in several cities of Afghanistan and infuriated protesters also burnt the Indian flag and the Indian Prime Minister Narendra Modi’s poster. After these recent developments, India is widely seen as a part of the Afghan problem within and beyond the region.

India’s Narendra Modi led government made another irreversible mistake to put all of its weight behind President Ashraf Ghani who himself lacks support and legitimacy from the international community. New Delhi wanted him to support their stance and put out their agenda but Ghani himself was left out of the whole negotiation process.

Assessing the current situation of intra-Afghan peace dialogue in the aftermath of the agreement reached in February, and the prisoner swap, India might not sit idle and watch the warzone turn into a gala land. So, the only option left for Narendra Modi is to work for sabotaging the Afghan peace agreement reached at Doha, which he already has started to do. Indian media is actively playing part in maligning and distorting the facts about the peace deal.

High time #India s proxies in #Afghanistan are exterminated, it is the only option if we want #Pakistan free of terrorism.

At the diplomatic front, Delhi was working to reach out to the Congress, the State Department and other influential elements to lobby President Donald Trump so in order to back off from the Afghan peace agreement. But it was aimed at India and its ally Ashraf Ghani when Donald Trump told the reporters that “Countries have to take care of themselves. You can only hold someone’s hand for so long.” “We can’t be there for the next 20 years. We’ve been there for 20 years and we’ve been protecting the country but we can’t be there for the next — eventually, they’re going to have to protect themselves,” he added.

As kinetic options, India has tremendously invested to create proxies throughout the region. It may use them to disrupt the ongoing efforts to bring peace in Afghanistan on the basis of the agreement concluded in Doha. The recent attack on the maternity ward in Kabul, blamed on ISIS that left 24 people dead was well coordinated and timed to serve a strategic purpose — a message to all the stakeholders. not to entertain any idea of political setup without Indian participation. On the other hand, they have started to fuel new wave the insurgency in Balochistan to divert Islamabad’s attention from the Afghan peace process.

The United States is currently critically dependent on Pakistan for the successful implementation of its peace deal aimed at securing an orderly withdrawal most likely before American Presidential elections in November this year, which is a major strategic reverse gear. US’s Special Envoy for Afghanistan has repeatedly lauded Pakistan’s efforts for peace and reconciliation of Afghan factions. On the other hand, the retreat of the US from Afghanistan is believed by experts as the finest hour of Pakistan’s statecraft. A nation has never in its history plotted and actively facilitated the ‘defeat’ of a superpower and yet continued to enjoy its goodwill.

India, despite its efforts, may not be able to reverse the progression of Afghanistan towards a new political order, replacing the post 9/11 imposed governance system. The fact remains that India has committed a huge strategic and foreign policy blunder in the hunt for its zero-sum game in Afghanistan. Moreover, after the harsh criticism by Iran’s supreme leader Imam Ayatollah Khamenei, India is very much friendless in the region. And as a result of Intra-Afghan dialogue, its last friend Ashraf Ghani will probably go back to the US to either join world bank consultancy or pick up a professorship. Looking forward, the regional stakeholders must beware of the spoiling role of New Delhi in Afghanistan.

Hassan Aziz is a student of LLB at International Islamic University, Islamabad. He’s presently working as a media secretary at Law Students Council. He tweets @H_AzizPk. The views expressed in this article are the author’s own and do not necessarily reflect the editorial policy of Global Village Space.

Previous articleUS and Europe reaping what they’ve sown, says Russian envoy
Next articleCOVID-19 world: Does the government or opposition have any plan?

22 June 2021
Previous articleUS and Europe reaping what they’ve sown, says Russian envoy
Next articleCOVID-19 world: Does the government or opposition have any plan?

Taliban to continue ‘fight and jihad’ if foreign troops stay

Afghanistan: The graveyard of US Empire