Why is Nawaz trying to exploit Justice Isa’s remarks? 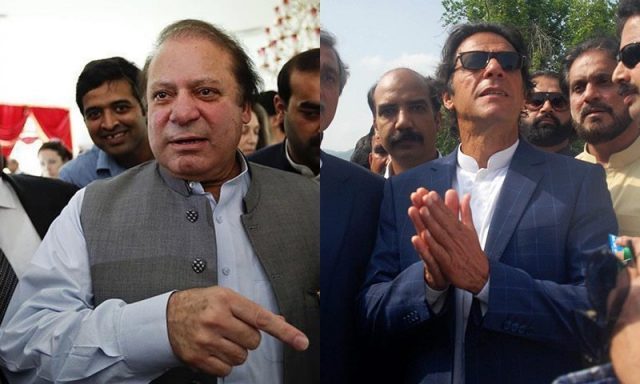 Ousted Prime Minister Nawaz Sharif has termed the Justice Isa’s remarks on the Panama case, ‘not an ordinary development’.

Talking to the media outside the accountability court, after trial proceedings on corruption charges, Pakistan Muslim League-Nawaz (PML-N’s) ‘Quaid for life’ said, that people from within the judiciary and from outside are commenting on the Panama verdict.

On Tuesday, Supreme Court judge, Isa passed a remark that the Panama case involving the ‘House of Sharif’  was related to the Avenfield flats in London acquired through corruption money and, Nawaz Sharif was disqualified on the basis of holding the United Arab Emirates Iqama.

While dealing with the appeal filed by Shakeel Awan-a member of PML-N hailing from Rawalpindi against the disqualification of Awami Mulsim League (AML) outspoken Leader Sheikh Rashed. Awan’s representative- Advocate Sheikh Ilyas is seeking disqualification of Rasheed under the Article 62(1)(f) of the Constitution, which was instrumental in ousting of PM Nawaz Sharif from the office on July 28, 2017, landmark verdict.

Rasheed has accepted his mistake over the calculation of certain valuation figures of his property/assets but never acknowledged any concealment of assets.

Awan claims that Rasheed concealed his assets in the nomination papers filed before the election commission Pakistan (ECP) in 2013 general elections. Similar petitions were also filed against the Pakistan Tehrek-e-Insaf’s chairman Imran Khan and general secretary Jahangir Khan Tareen, over concealing assets and being dishonest, on which the latter was disqualified.

Nawaz and his loyalists seek disqualification of key members either supporting Imran Khan verbally or through funding and played any role whatsoever in helping Nawaz disqualify. Unlike the Panama case judgment, Rasheed has accepted his mistake over the calculation of certain valuation figures of his property/assets but never acknowledged any concealment of assets, which court observed as advocated by Advocate Abdur Rashid Awan-who represented Rasheed.

Nawaz is trying to exploit Justice Isa’s statement by telling people that how his narrative of disqualification based on Iqama is correct-which is now even acknowledged by the justice of apex court.

Nawaz kick-started his anti-judiciary campaign and in his post  disqualification strategy he along with his loyalists publically bashed Supreme Court’s July 28, 2017, decision to disqualify him and opted for confrontational approach and pitted the institution against each other after building a momentum during his visit across the country to apparently play victim card over his ousting.

He is already claiming that next general election will be a referendum against his ousting and has urged the supporters across Pakistan bring a revolution under which respect for the people’s mandate would be restored.

After, holding massive rallies across Pakistan, and demonstrating street power, the father-daughter duo look more confident and have challenged the non-democratic forces and used the phrase ‘rok Sako to rok lo -[stop us, if you can]’ very often pointing towards an expected win in next elections.

Maryam has been a triumph card for Nawaz by drawing big crowds and providing trolling replies to Khan’s anti-government campaigns.

Justice Isa’s remarks are used as credence by Nawaz to convince public of his stance of ousted on non-corruption charges. How ironic is to claim innocence standing outside accountability court over corruption charges?

What is important to understand is that as was elaborated in apex courts first judgment that Nawaz had apparently committed money laundering and embezzlement was proven. But, the apex court had no authority to declare a verdict on corruption charges and disqualified Nawaz for not declaring receivables.

Rather than uttering rhetoric over Justice Isa’s remarks, Nawaz should read the full Panama judgment to know the reasons for his disqualification. If he was innocent, then why did the Supreme Court disqualify him from holding an office of the PM and directed the National Accountability Bureau (NAB) to file three references against ‘house of Sharif’? Moreover, two additional references were also filed. If corruption charges and Joint Investigation Report (JIT) was not credible and had nothing concrete, over 50 prosecution witnesses in the four references, and further 40 witnesses in additional references would not have delayed the cases.

Until now, Nawaz has failed to present credible proofs to prove his innocence and source of his mammoth wealth is still unknown. Apparently, Nawaz will continue pressurizing the institutions, seeking some respite from the probable unfavorable decision, because apparently, he has no plan B.