Why is Tableeghi Jamat in hot waters in Pak, India & France?

The annual meeting of the Tableeghi Jamaat has been anything but smooth this year. What is seen as a yearly gathering of individuals around the globe proved to be a breeding ground for the coronavirus. This has unfortunately led to the organization being tarnished greatly, especially in India. However if one were to keep this episode aside there is much more that meets the eye. The celebrated author, analyses what the world view is of the party. 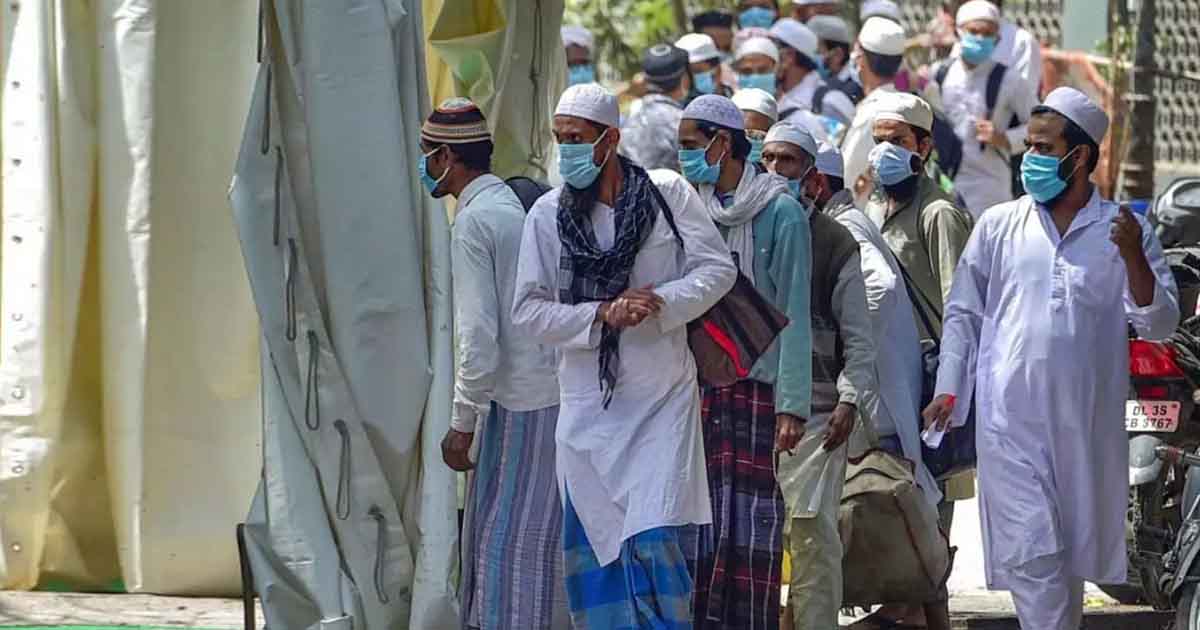 In the backdrop of COVID19 surge worldwide, two congregations of the TJ, one in Pakistan (150,000 people) and another in India (3000 people) rippled shockwaves. Both, allegedly, violated official instructions. Hundreds of foreign attendees came to Nizam mosque (New Delhi) as `tourists ‘instead of as ‘missionaries’ from 21 countries, including Indonesia, Bangladesh, Myanmar, Malaysia, Sri Lanka and Kyrgyzstan. As such, India sealed the mosque, and booked them, including chief priest Maulana Saad, under criminal laws and unleashed a witch hunt to catch those who escaped the dragnet.

India’s view:`Islamic proselytizers appear to have worked around the scrutiny by hiding the real purpose of their travel to India, blindsiding Indian missions abroad’. And, `they operate in grey areas and their preaching can be used to radicalise youth in the name of Islam’. A newspaper asked, `But if this isn’t plain stupidity in the name of Allah, then what is? Contamination, from Assam to Telangana to the Andamans.

Assistant FBI Director [US] Michael Heimbach says that TJ has a significant presence in the US, and Al-Qaeda was found to have recruited TJ adherents [New York Post Dec 27, 2015]

Those initially jailed, ostensibly for violating visa norms, included 28 foreigners, 11 from Malaysia, nine from Kyrgyzstan, seven from Indonesia and one from Kazakhstan (The Statesman April 15, 2020). Malaysians bore the brunt as it harbours vendetta against the country’s view on disputed Kashmir and gives asylum to Dr Zakir Naik. India jailed the Tableeghi attendees in solitary confinement after witch hunt across all states.

A terror factory? In France, according to an article, as many as 80% per cent of the Islamist extremists have come from Tableeghi ranks, prompting French intelligence officers to call Tableeghi Jamaat the ‘antechamber of fundamentalism.’ They have also been accused of moulding terrorists who have moved to larger terror groups.

Dr Farhan Zahid, in his analysis titled “Tableeghi Jamaat and its links with terrorism” [Foreign Analysis March 2015 Centre Francais de Reserche Sur le Renseignement] describes TJ as `nursery and gateway to terror’. He alleges, perhaps without sufficient corroborative evidence, “TJ is another system driver and integral element of Islamist Violent Non-State Actors’ internal dynamics; in many cases, it has acted as a nursery for indoctrinating Islamist terrorists.

He further says TJ “in a way plays the role of recruiter and sympathiser [for terrorism]. TJ’s congregation allows radical elements worldwide to meet and discuss violent activities and provide them with the best opportunity to coordinate”. Adding “many of its followers have dual and overlapping membership with jihadist groups”. He cites references and says “TJ has now been considered as a ‘gateway to terrorism’.

He says since 2001, traces of links have been found between TJ and Islamists involved in acts of terror. Shoe bomber Richard Reid who attempted a trans-Atlantic airline bombing [2001], Jose Padilla who tried dirty bomb manufacturing [2002] in New York City, Barcelona terror plot [2008] and the arrest of American Taliban John Walker in Afghanistan [2001] were all linked to TJ.

The Muslim World after 9/11‘. The monograph alleges Al Qaeda recruits may have a connection with Pakistan’s Tableeghi Jamat

Its French Muslim recruits were found involved in planning attacks by the Portland Seven and the Lackawanna Six in the US.” During the 1980s and 1990s, TJ became the recruiter of Islamist radicals for the Afghan war. He points out that Harkat-ul Jihad-al-Islami [HuJI] was formed by former TJ members Qari Saifullah Akhtar and Fazal ur Rahman Kalil along with others. From the HuJI platform emerged other jihadist outfits – Harkat-ul-Mujahideen [HuM] Jaish-e-Mohammed [JeM], Sipah-e-Sahaba [SSP] and Lashkar-e-Jhangvi [LeJ]. All of them stand declared as terror outfits.

In his analysis titled “Tableeghi Jamaat: Jihad’s stealthy Legions” in Middle East Quarterly [Jan 8, 2016] Alex Alexiev writes that as 80 per cent of Islamist extremists have come from Tableeghi ranks and the French intelligence calls TJ the ‘antechamber of fundamentalism’.

Freth Burton and Scott Stewart, writing in an analysis titled “Tableeghi Jamaat: An Indirect Line to Terrorism” in the Stratfor Global Intelligence Security Weekly, say that 12 out of the 14 men arrested in a pre-emptive raid on a mosque in Barcelona for plotting to attack targets belonged to TJ, adding that TJ’s name figured in the 2005 London underground bombings in which 52 people died and also in the attempted bombings in London, Glasgow and Scotland.

Assistant FBI Director [US] Michael Heimbach says that TJ has a significant presence in the US, and Al-Qaeda was found to have recruited TJ adherents [New York Post Dec 27, 2015]. Mohammed Ahmedullah’s book ‘The Pakistan: After the Coup’ is full of venom against the TJ. Khaled Ahmed, former diplomat and editor of Friday Times in Pakistan writes in On the Abyss: “Because of the rise of Deobandi militias…. the [Punjab] province is rapidly losing its Barelvi temperament.”

What the authors had prophesied came true in the very next year when Pakistan was found involved in 9/11 attack on the US. Over the years, Pakistan has come to be known as the global terror hub. Says Dr Farhan, “Several mainstream Islamist violent non-state actors have taken their roots from TJ’s indoctrination and on the platform provided by TJ missionaries. It is the Deobandi ideology of TJ which provides potential jihadists with a crucial link.

In a 173-page paper titled “Tableeghi Jamaat: Wolf in sheep’s skin, released to media again after the Nizamuddin episode, Salah Uddin Shoaib Choudhury, a Zionist and multi-award-winning anti-jihadist journalist and a counterterrorism specialist, unravels the massive following of JT and its terror connections the world over.

Thousands of TJ teachers from within and outside assemble in India and that is what they did in Nizamuddin. Is it just to memorise the six noble principles or as Dr Farhan says “to discuss and coordinate terror activities”, will never be known in India, as no government has the guts to enter any mosque, thanks to the way secularism is understood in our politics.

Unless this limit is breached and the menace is outlawed, innocent Muslims attracted by its cosmetic exterior of following the Quran cannot be saved from becoming carriers of Kalashnikovs and makers and throwers of lethal bombs. Let the courts decide whether TJ’s right to mentor terror in India also constitutes minority right, as is so far being understood.

Analysis: It appears that anti-Pakistan elements, including those in prestigious’ think tanks, and `intellectuals’ make pernicious allegations about TJ. Most writers appear to be sponsored by RAW, India’s premier intelligence agency. Indians in ‘think tanks’ are at the forefront of disinformation.

The aim is to tarnish Pakistan’s image. As for the USA, it is afraid of organisational ability and discipline of the TJ. Take RAND’s monograph `The Muslim World after 9/11‘. The monograph alleges `Al Qaeda recruits may have a connection with Pakistan’s Tableeghi Jamat.

The [Tableeghi] gathering is often a means to get into Pakistan, and once the individuals are in, they are fairly free to associate with whomever they desire…Raiwind is heavily monitored by a variety of intelligence organisations such as Pakistan’s Inter-Services Intelligence Directorate (ISI), Military Intelligence (MI), and the special branch.

Inference: The eclectic media reports toe RAND’s, probably US-dictated line. RAND’s “mosque-and-madrassa reforms” reflect that the authors have never visited any madrassa. TJ has no militant agenda, so far. Through stretch of wild imagination, it is being linked to militancy. India is fearful of TJ’s visits to Kashmir under her yoke.

Mr. Amjed Jaaved is editor to The Consul. His contributions stand published in the leading dailies at home and abroad (Nepal. Bangladesh, Sri Lanka, et. al.). He is author of seven e-books including Terrorism, Jihad, Nukes and other Issues in Focus. The views expressed in this article are the author’s own and do not necessarily reflect the editorial policy of Global Village Space.

8 Year old’s rape in India, most dangerous place for children as well?