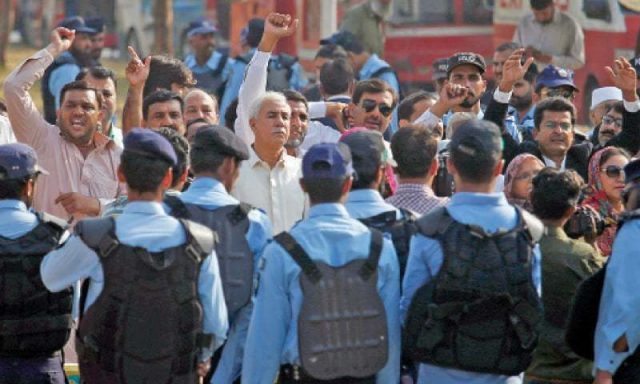 The capital administration authority has made a request to the Interior Ministry for the deployment of rangers at the residence of Pakistan Tehreek-e-Insaf Chairman Imran Khan.

According to the report prepared by the ICT police, there are around 700 protestors gathered around the residence of the PTI’s chief – who could easily damage property and threaten the life of the politician.

“It is requested that Sector Commander Rangers may be approached and requested to deploy 300 personnel in aid of the police to perform duty at the house,” the police added.

The Deputy Commissioner Islamabad retired Capt Mushtaq Ahmed has also confirmed that ‘the Rangers had been sought to maintain law and order and a reply in this regard from the Interior Ministry was awaited.’

It is important to note that the PTI workers from Punjab and Khyber Pakhtunkhwa (KP) have been protesting outside the residence of Imran Khan at Bani Gala since June 3, over the distribution of tickets for the upcoming general elections. They staged a sit-in a few yards away from Mr. Khan’s residence. The workers believe Mr. Khan has ignored some party leaders over some electable in both provinces.

He then urged the workers to submit review petitions, adding that he will sit with the party’s board and review the decisions in the next three days.

“Will decide on the basis of merit,” Imran said to the disgruntled workers, after listening to their grievances.

Khan further asked the workers “to trust him,” giving an example about how he expelled 20 MPAs from the party for selling votes during the Senate elections.

PTI’s worker are not happy over the award of party tickets to the electable who, in their view, do not subscribe to the party ideology. The protest is being led by some local leaders and political workers from different areas of Punjab and KPK. But the party leadership is of the view that to manage an electoral win, it is imperative for the party to award tickets to those who can surely win in their respective constituencies. The explanation is based upon empirical grounds which means in most parts of Pakistan elections are contested not on a party basis, rather identities are invoked to deepen horizontal and vertical cleavages to win an election.

In the last few months, there have been many political figures from Punjab who decided to alter their loyalties and joined PTI. Imran Khan welcomed electable from Punjab and made them a part of his struggle for ‘Naya’ Pakistan.

Moreover, the ongoing protest at Bani Gala is a new phenomenon in Pakistan’s political culture where a few families had the monopoly to decide who will become the member of national and provincial assemblies and who will not. This protest reflects the political consciousness and a sense of political responsibility among the people who have come up to record their protest with a hope that their voice will be heard.

The political consciousness and a sense of political responsibility are said to be the primary ingredients of a democratic political culture. PTI’s chief has been making efforts to awaken the nation and it is interesting to note that the people have started questioning him. This is a healthy sign of growth and development of democracy in Pakistan.

Meanwhile, Imran Khan is expected to stick with his decision as he plans to form the next government after winning the upcoming general elections. Imran Khan has said many times that this time his party is fully prepared to contest elections and make ‘Naya’ Pakistan. Electables are, hence, indispensable for PTI.

Previous articleHow the ‘5-Hours Rule’ will make you successful?
Next articleTurkey gets its first F-35 jet despite U.S Senate’s move to block the sale

18 June 2021
Previous articleHow the ‘5-Hours Rule’ will make you successful?
Next articleTurkey gets its first F-35 jet despite U.S Senate’s move to block the sale

Iranians feel stress of turmoil and US sanctions