The absence of rules, regulations and laws regarding horse-trading is one of the major challenges to bringing transparency in the Senate elections. The importance of these laws also comes to light at a time when political parties are accusing one another of buying loyalties to grab the lion’s share in the upper house.

In the light of the existing constitutional provisions, Senate elections are held through a secret ballot which has questioned the transparency of the vote. There are allegations that political parties were in contact with candidates of rival parties and won support for their respective candidates in exchange for lucrative favours. 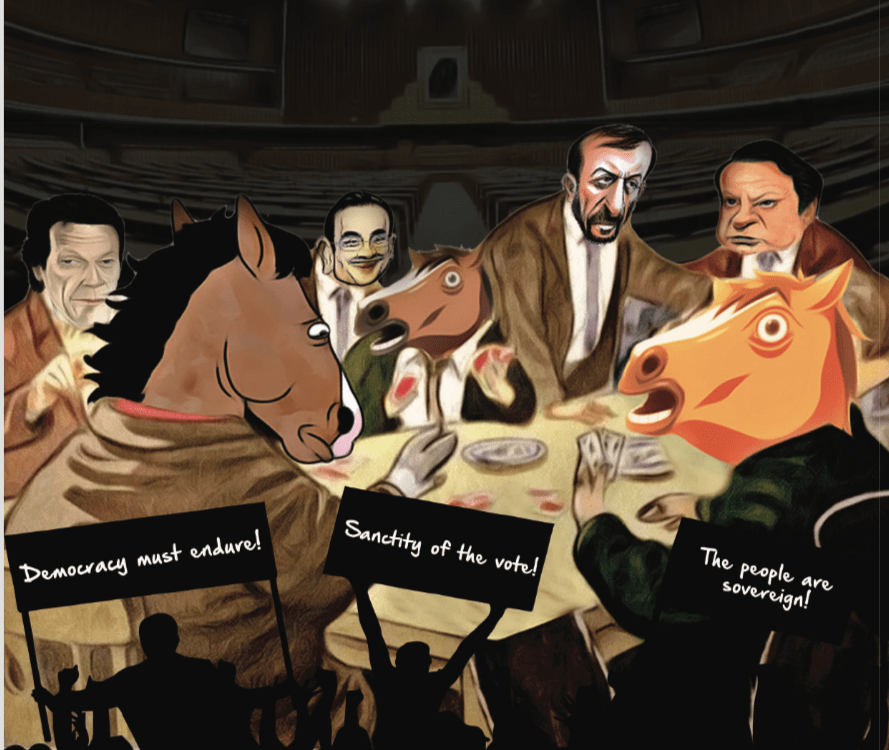 Unless existing laws are changed to a ‘show of hand’ method in place of the secret ballot, there will be no end to horse-trading. Recently, the Pakistan Muslim League-Nawaz (PLM-N) accused the Pakistan People’s Party (PPP) leadership of conspiring to topple the PML-N government in Balochistan to bring a favourable set-up ahead of the Senate elections.

The Pakistan Tehreek-e-Insaf (PTI) has also accused both the PML-N and the PPP of trying to buy the loyalties of its lawmakers in Khyber-Pakhtunkhwa (KP). Reports also suggest that the PPP was cashed in on the split in the Muttahida Qaumi Movement-Pakistan (MQM) camp to ensure maximum seats in the Senate from Sindh.

The rationale that existed for a secret ballot for the Senate elections was to allow MPA’s to “listen to their conscience” and vote. “But this has been thoroughly misused.

Nothing can be done — absolutely nothing — to stop horse-trading in Senate polls as long as elections are held through a secret ballot. Instead of cribbing and crying, parliamentary parties need to come together to put an end to the secret ballot by bringing a constitutional amendment. This would help ensure transparency and openness which are the basic election essentials. 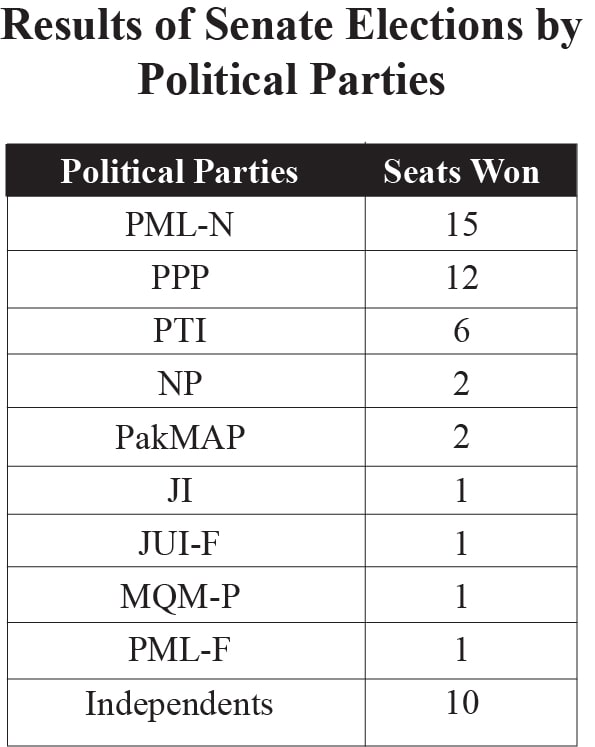 All that can be determined is the vote count; the number of actual votes cast in favour of each contesting candidate. The secret ballot process leaves no trail to determine who has voted for whom. This has opened – for years – the floodgates of horse-trading. Unfortunately, Senate elections have earned the reputation of being the ‘stock exchange of voters’, where rates (crores) are offered and votes are bought.

The rationale that existed for a secret ballot for the Senate elections was to allow MPA’s to “listen to their conscience” and vote. “But this has been thoroughly misused and we haven’t seen anything like conscience as far as Senate elections are concerned.

In addition, even if the identity of any legislator who resorts to horse-trading is revealed, he or she cannot be disqualified from Parliament as the defection clause for voting against party policy applies to the election of prime minister, chief ministers, vote of confidence, no confidence, money bill and constitutional amendment bill.”

Article 63(A) reads, “Disqualification on grounds of defection, etc

If a member of a parliamentary party composed of a single political party in a house a) Resigns from membership of his political party or joins another parliamentary party; or b) Votes or abstains from voting in the house contrary to any direction issued by the parliamentary party to which he belongs, in relations to – i) Election of the prime minister or the chief minister; or ii) A vote of confidence or a vote of no-confidence; or iii) A money bill or a constitution (amendment) bill; he may be declared in writing by the party head to have defected from the political party, and the head of the parlimentary party may forward a copy of the declaration to the presiding officer, and shall similarly forward a copy thereof to the member concerned: provided that before making the declaration, the party head shall provide such member with an opportunity to show cause as to why such declaration may not be made against him.

Election Timetable on the Cards

It merits mention that PM Abbasi time and again has suggested that general elections would be held in July this year– a claim that has confounded the Election Commission of Pakistan (ECP). ECP officials are saying that they have no idea how PM Abbasi has come up the election dates.

Under the law, it is the sole prerogative of the ECP to decide a schedule for election. But even going by the assessment of PM Abbasi, if elections are to be held in July, the caretakers need to be at the helm of affairs by the end of March. Hence, the prime minister’s recent consultation with the opposition leader Khursheed Shah has a specific significance.

The very composition of the Senate — equal members for the four provinces and different elected categories of senators — suggests a higher, federation-binding purpose.

Under Article 224 of the Constitution, the national and provincial assemblies would likely be dissolved by May 31 this year. Caretakers are to be decided from May 25 to 31 and the caretakers would be taking charge by June 1. Under the law, elections have to be held within 60 days of the expiry of the term of assemblies. Hence, general elections may be held on July 18 or 20th. New assembly to take oath on August 13 and a new PM’s election can be held on August 14.

Reaction of Parties to Senate Elections

The initial reaction of the major political parties to the results of the Senate election has underlined why parliament has failed to become the fulcrum of the democratic process in the country that it ought to be. The response of winners and losers has both been intensely political, a reality that in and of itself is not a problem.

The Senate electorate is the people’s representatives in the country’s assemblies, which are rightly dominated by political parties. Yet, the very composition of the Senate — equal members for the four provinces and different elected categories of senators — suggests a higher, federation-binding purpose.

But a familiar trading of allegations of vote-buying, a real problem that no party has attempted to solve in good faith before the election, and a scramble to grab the Senate chairman slot in a house where no single party has anything close to a majority, suggest very different priorities of the parties themselves as compared to what the Constitution envisages.

The incoming senators have six years to demonstrate their commitment to the democratic project and interest to strengthening institutions. However, the Punjab-centric focus of the PML-N and the party leadership’s near disdain for parliamentary norms and traditions have accelerated the weakening of parliament as an institution.

However, they are not alone to bear responsibilities as other parties and most senators themselves have played their part too. It is striking how other than for a handful of senators, the Senate has remained quiet about some of the most pressing issues of the times.

Kunwar Dilshad is the former Secretary to the Election Commission of Pakistan and worked in the organization for over 30 years. He is currently the chairperson for the National Democratic Foundation. The foundation’s work is to grow and strengthen democracy in Pakistan.

Why did Maulana Fazlur Rehman expel Mohsin Dawar from PDM?

Crackdown against ‘Un-Islamic Beards’ in KP: Barbers Arrested for Styling

Tribes protest in Islamabad: demand elections in FATA along with KP; will ECP agree?