The determination of the exchange rate is based on the position of our balance of payments and the foreign reserves held with the central bank. If a country does not have the required foreign reserves and its existing foreign reserves continue to deplete, then it has to devalue the currency to boost the exports which help to bring in dollars.

Suppose, if the manufacturing cost for a product is Rs.100, and it is sold at around the same price in dollar terms, margins remain on the lower side. But if it costs Rs. 90 after depreciation and is sold at US$1, it becomes beneficial for the exporter.

The problem with Pakistan is that rather than using the market-based exchange rate which is determined by the market forces of supply and demand, the State Bank of Pakistan, has been controlling it through intervention – by either increasing or decreasing the supply of dollars in the market – depending upon the requirement.

Global competitiveness, quality of products and value addition are some of the key factors which can be instrumental in addressing the issue of exports.

But how long can you continue to do that? No country in the world is able to maintain that for long. If one keeps the value of rupee against the dollar artificially and forcefully high for too long, there is always a resultant stronger pressure on the currency, when it is allowed to depreciate.

The gap increases all of a sudden when the market-based rate replaces the controlled exchange rate – which would not have been the case had it not been kept artificially high for a prolonged duration. Everyone from economists to the IMF have been saying that the Pakistan rupee is overvalued for the past couple of years.

Recently, Moody’s Investors Service changed Pakistan’s economy rating to negative, stating fears over external vulnerability risks. This reaffirms that Pakistan’s chronic problems related to macroeconomic stability are yet to be resolved. Once again the country is in its historical pattern of boom and bust economic cycle. 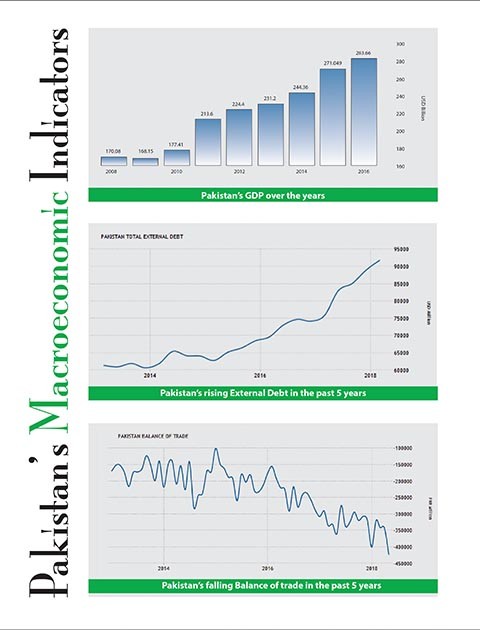 Currently, the trade deficit is the biggest problem for us, which is leading to a huge strain on the balance of payments – especially as remittances have also slowed down. Recent numbers show that Saudi Arabia, our largest source of remittances has shown declines of 10% in FY18.

Last year, the current account deficit had a net shortfall of around US$12 billion, however this year, it is expected to reach around US$17-18 billion. How can Pakistan make up for such a massive shortfall? Eventually, it affects foreign reserves. The trade deficit is high because imports are increasing at a much higher rate as compared to exports.

The determination of the exchange rate is based on the position of our balance of payments and the foreign reserves held with the central bank.

The basic issue is how to make up this shortfall. On one side, we must reduce the import bill, but at the same time, we must also act to boost our exports to bring more dollars in our coffers. Global competitiveness, quality of products and value addition are some of the key factors which can be instrumental in addressing the issue of exports.

To compete globally, with better quality products at competitive prices is key. But, at the same time, value addition is a necessary aspect. Since more than 60% of the exports are textile products, if we sell yarn or clothing, it has a value.

Suppose, a raw material product is sold at US$1; however, if we make finished products (garments) with it, they can sell at US$20. There is always a gap in between, which can be captured. Similarly, in other industries, opportunities are there to be seized.

Abdullah Yousaf is the former Chairman of the FBR. He has served as the secretary of Ministry of Petroleum & Natural Resources, Planning & Development Division, Board of Investment and Privatization Commission. Yousaf is currently serving as the Chairman of Public Sector Committee of ICAP.

Magazine Desk - February 8, 2021
Since the turn of the century, Pakistan has become a more inward-looking economy. Despite a rapid recovery from the COVID19 shock, a long-term examination...

Decisions 2020: All eyes on Beijing

Pakistan Towards 2030 – Desperate need for legal and judicial reforms

Challenges of ‘Made in Pakistan’

Et tu, Brute? Senate: Where it came from?

Why or why not an ‘open ballot’: Insights by experts Senate Elections 2021

Joker – the best Hollywood film of the year

Shazam – most family-friendly film to date

Why “Avengers: Infinity War” is a must watch