A retired vice admiral appreciates the relevance of AMAN Exercises but argues that Pakistan must find a seat on the board of the Indian-Ocean Rim Association (IORA).

Pakistan Navy embarks on Exercise AMAN – 19, a continuation from AMAN-2007, in which 28 countries had participated. It is the 6th in AMAN series and has since been held biennially and regularly since then with one exception in between.

It encompasses basic operational activities and procedures common to all navies and serves as a great opportunity for all stakeholders to share ideas and learn from each other’s experiences. This year’s exercise will also enable participants to consolidate on what has been achieved in the past years.

For Pakistan Navy, it is an occasion to project the country’s image in a positive light and showcase its unmistakable relevance and emergence as a potent and expanding maritime force in all dimensions of naval warfare, ready to fulfil its national responsibilities to secure its lifeline of seaborne trade on which the country is so heavily dependent.

Pakistan Navy embarks on Exercise AMAN – 19, a continuation from AMAN-2007, in which 28 countries had participated.

This year, 43 countries have so far expressed interest to participate in one or the other format of the exercise. The number of participants have been steadily increasing over the years, which is a good measure of its success.

Arranging exercises on such a large scale is an expensive and logistically complex activity, and it’s possible that some countries see a favourable cost-benefit ratio in terms of valuable training experience and opt to participate for this reason alone.

Nevertheless, the increasing number of participants over the years, is very encouraging and reflects a growing urge amongst maritime nations, both regional and extra-regional, to strive for new ideas for closer collaboration to grapple with contemporary challenges at sea in 21st century AMAN exercise is suitably structured to promote co-operation and inter-operability between regional and extra-regional navies, with area of interest and operations in the Indian Ocean. 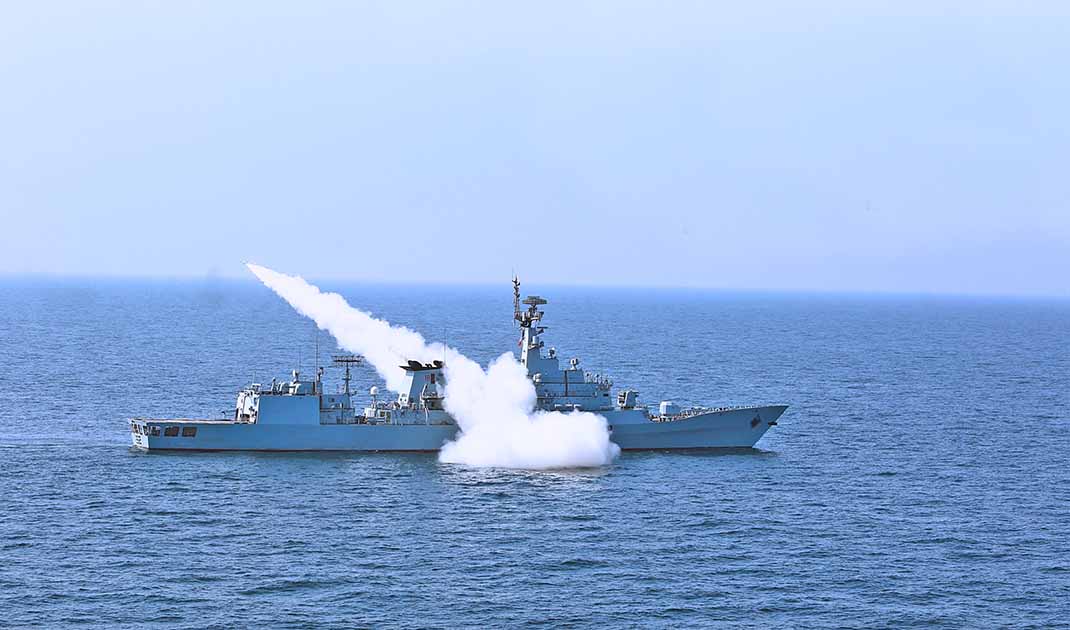 These naval manoeuvres are expected to provide building blocks for the development of coalitions in the future and training opportunities in multi-layered security co-operation and promote safe and sustainable marine environments Presence of navies from afar provides opportunities to improve tactical interoperability between regional and extra-regional forces, which in time, could act as a bridge between the regions.

Pakistan is a peace-loving country and does not have aggressive designs against any other country. Just like land borders, there are issues at sea which relate to territorial waters, contagious zones, exclusive economic zones and continental shelf and Pakistan is desirous to resolve them all with its neighbours in accordance with international law and expects others to reciprocate in the same spirit.

Our Exclusive Economic Zone (EEZ) has been extended but oceanic and geological surveys are needed before precious resources for their excavation can be allocated. Complete harmony in all such matters is desired with all stakeholders and multi-lateral naval exercises serve as an expression of such desire.

The number of participants have been steadily increasing over the years, which is a good measure of its success.

Pakistan believes in international agreements concerning the use of world oceans, adherence to established guidelines for unhindered flow of trade, management of marine natural resources and is always keen to help improve maritime environments in a sustainable manner.

Pakistan holds in high esteem the roles assigned by the United Nations to such bodies as International Maritime Organization (IMO) and International Seabed Authority (ISA) and is cognizant of its obligations towards protecting freedom of the seas, upholding legal regimes established for controlling mineral resource exploitation in deep seabed areas within and beyond national jurisdiction – embedded in the principles of common heritage for the good of all mankind.

Exercise AMAN-19 is being held at a time when regional and global geopolitical milieus are changing very rapidly. In the Persian Gulf, the US has recently inducted aircraft carrier USS John Stennis and its escorts to exert pressure on Iran. This deployment has happened after a gap of nearly eight months – longest in the last two decades and just when it was taken as a sign of reduced tension in the region.

Now that will change. In 2016, Indian Prime Minister Narendra Modi had publically threatened to isolate Pakistan internationally and had since been working diligently towards this end. The level of interest in Pakistan in recent past, including interest in Exercise AMAN -19, is a clear sign of his failure.

Pakistan has a significant coastline and is situated in close proximity of the Persian Gulf and Gulf of Eden. It is destined to play an important role of connectivity in the Indian Ocean by virtue of its geographical location and participation in China’s ‘Belt and Road’ (BRI) initiative. CPEC has further enhanced Pakistan’s visibility in the Indian Ocean. Naval exercises at regular intervals and at this scale are needed to reinforce that perception and forge closer relations with countries which have stakes in the Indian Ocean.

Pakistan, however, is not a member of the Indian Ocean Rim Association (IORA) – a dynamic inter-governmental organization aimed at strengthening regional cooperation and sustainable development within the Indian Ocean region. It has 22 full members and 9 dialogue partners who meet annually or more often, as collectively decided.

Complete harmony in all such matters is desired with all stakeholders and multi-lateral naval exercises serve as an expression of such desire.

While large scale naval manoeuvres are of great value in their own right, IORA offers wider scope since decision-making powers rest with Council of (Foreign) Ministers. As it is well known, military to military co-operation is always stronger and more reliable, if it follows political convergence of respective foreign policies and not the other way around.

Pakistan’s application for membership of IORA is lying in its secretariat since 2001 but opposed by one single country, India. Membership of IORA would help Pakistan to play a more effective and integral role in the regional maritime security paradigm.

As an example, US, France, Japan, Italy and China have bases in Djibouti, situated in the horn of Africa – and all but Italy are dialogue partners in IORA, while none of these countries have indigenous geography in the Indian Ocean. Pakistan has an 1100 kilometres long coastline –and massive trade dependencies on sea routes.

It is paradoxical that on one hand, India labels Pakistan as an ‘enabler’ for facilitating China in Gwadar on the shores of the Indian Ocean which it claims as its own and considers China as an outsider, but then supports China’s full access to IORA but opposes entry of ‘enabler’ Pakistan.

This joke has gone on long enough and should now come to an end. Our membership case needs to be pursued vigorously with robust diplomacy to counter India’s misplaced notion about ownership of the Indian Ocean. Put another way, no power on earth can stop Pakistan from playing an important role in connectivity in the Indian Ocean – but can Pakistan ‘connect’ without ‘belonging’ to the Indian Ocean?

Pakistan’s application for membership of IORA is lying in its secretariat since 2001 but opposed by one single country, India.

Djibouti is a Muslim majority country which could make it easier for Pakistan to make inroads in the region to our advantage, through a mix of naval and conventional diplomacy, both for peacetime activities and in war. China’s CPEC/ BRI’s forays into the African continent and its presence in Djibouti makes a good case for Pakistan to consider getting a foothold there to better secure our maritime interests.

Turkey is considering to establish a base in Djibouti and there are reports of India setting up an embassy. The significance of these developments cannot be overemphasized nor can Pakistan remain oblivious to this emerging scenario. Pakistan does not have centuries-old maritime traditions like some other countries in the region and our coastal belt is scantily populated and financially stressed to support any major effort to change the economic pattern.

However, a beginning can be made through enhanced awareness to use sea resources to our benefit. The advantages gained from regular AMAN series exercises can perhaps be synergized with other elements of national power to integrate some segments of ‘Blue Economy’ in mainstream national economic endeavours. It is about time to view these new opportunities from the other direction – from Khasgar to Gwadar – and further south in the Indian Ocean where murky green coastal waters turn turquoise blue.