The AMAN are biennial multinational exercises initiated by Pakistan Navy in 2007. The very first of such events, in March 2007, saw participation by 28 countries. These not only included naval forces from the Indian Ocean littoral states but key western countries like the US, UK, and France also joined. China, Turkey, Malaysia and Bangladesh participated. And 21 countries had attended the first AMAN exercise as observers.

Since then, AMAN multinational exercises have been held five times in Karachi and around Pakistani shores. Over the years, naval forces from Russia, Japan, Italy, Australia, Nigeria, Saudi Arabia, Sri Lanka and even tiny Maldives have found representation in AMAN events making these a global affair.

When Pakistan Navy launched AMAN it had several regional connections, respect as a credible maritime partner and reasonable international experience under its belt.

The first week of February 2019 will now see the sixth of such international assemblies at Pakistani shores with more than 40 countries participating. PM of Pakistan, Imran Khan will be the Chief Guest. Why have AMAN events become such sustained success? one naturally wonders.

The answer lies partly in history, partly in geography and mostly in the peculiar maritime dynamics of Indian Ocean Region (IOR) – the west Indian Ocean to be precise.

In 2004, Pakistan became part of the United States led “Combined Maritime Force (CMF) and became an active member of Combined Task Force 150 (CTF-150) which was mandated to ensure maritime security under the Operation Enduring Freedom (OEF) in the Western Indian Ocean. 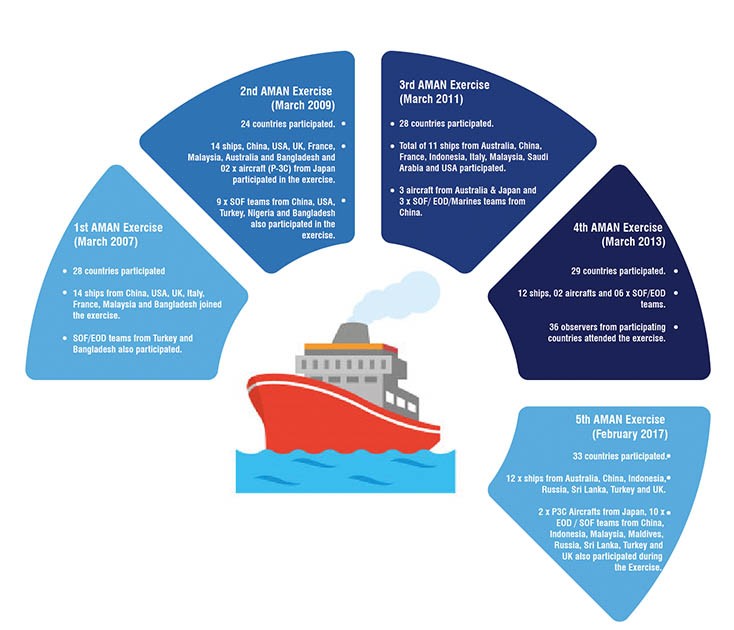 CMF was operating under the auspices of NAVCENT (US Naval Forces Central Command) that had its bases in Bahrain with responsibilities including the Red Sea, Gulf of Oman, Persian Gulf and the Arabian Sea. Fifth Fleet based in Bahrain was central to NAVCENT but it also included additional task forces and CTF-150, 158 and later CTF-151.

The main objective was to maintain stability and protection of global sea lanes especially global energy supplies. In the last 14 years, Pakistan grew to become one of the most important and credible members of this multinational Combined Maritime Force (CMF).

All challenges transcended national boundaries and could only be met through collaborated planning, cooperation and execution.

It contributed more than 100 ships and thousands of men to these responsibilities and imbibed a lot of strategic thinking in the process. After the Somalian civil war, pirates threatened the shipping on East African coast; CTF-151 was created in 2009 to respond to the challenge of Somali pirates and Pakistan was one of its initial members.

Pakistan Navy (PN) was so robust in this arrangement that in the last 14 years it has commanded multinational CTF150 ten times and CTF-151 eight times.

So when Pakistan Navy initiated its own multinational exercises under the umbrella of AMAN (meaning Peace in its national language Urdu) it had several regional connections, respect as a credible maritime partner and reasonable international experience under its belt exercise The governing vision behind Pakistani initiatives is simple but brilliant.

All littoral states in the Indian Ocean region (West Indian Ocean to be specific) were coming to understand that their part of the ocean now needs coordinated maritime responses from regional and other stakeholders like the United States.

This became increasingly pertinent given the common threats faced at high seas stemming from piracy, human trafficking narcotics smuggling, and terrorism. All these challenges transcended national boundaries and could only be met through collaborated planning, cooperation and execution. 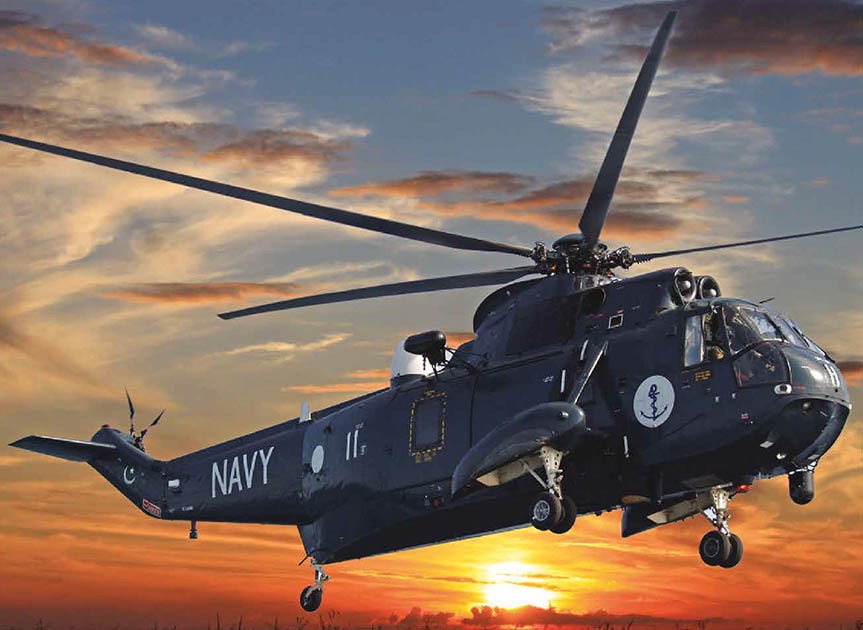 AMAN, a multinational maritime collaborative exercise, is designed principally to increase cooperation, trust and interoperability between partner navies. Interoperability, a military term, in easy words means to understand each other’s operational equipment and tactics so that you can easily work together or in conjunction in times of crisis.

CMF was operating under the auspices of NAVCENT  that had its bases in Bahrain with responsibilities including the Red Sea, Gulf of Oman, Persian Gulf and the Arabian Sea.

The basic purpose of the exercises includes augmenting professional expertise in joint operations and strategy and achieving a consensus approach for global maritime security – an ability to act together.

Like all previous AMAN exercises, this year too it will have two distinct phases: Sea Phase and Harbour Phase.

Sea phase will provide an opportunity to naval units to focus on interoperability and mutual understanding of capabilities and to understand each other’s skill levels through a wide range of activities like Search & Rescue Operations (SAR), Gunnery Drills, Anti-piracy Operational demonstrations, Replenishment at Sea (RAS), Anti-Surface & Anti-Submarine Warfare and interdiction exercises.

The Special Operation Forces (SOF), Explosives Ordinance Disposal Teams (EODs) and different marine units will display and familiarize themselves with weapons and equipment of various countries.

This year, an International Fleet Review (IFR) is also scheduled at sea on February 12, 2019. During the review different operations such as Replenishment at Sea (RAS), Counter Piracy Demo by Pakistan Navy Maritime Seaward teams (MSW), Rocket Depth Charge firing, Surface Firing on Killer Tomato, Fly Past by Air Units by Pakistan and Foreign participation forces, and events like “Man And Cheer Ship” in honor of the Chief Guest, the PM of Pakistan, will be conducted.

During the Harbor phase, participants will witness maritime counter-terrorism demonstrations by Pakistan Marines Commandos (SSG). They will visit ships of various navies for a deeper understanding of each other.

The hallmark of the harbour phase will be an International Maritime Conference (IMC) which will be held under the aegis of National Centre for Maritime Policy and Research (NCMPR) at Bahria University – attended by eminent international speakers and delegates from across the world. 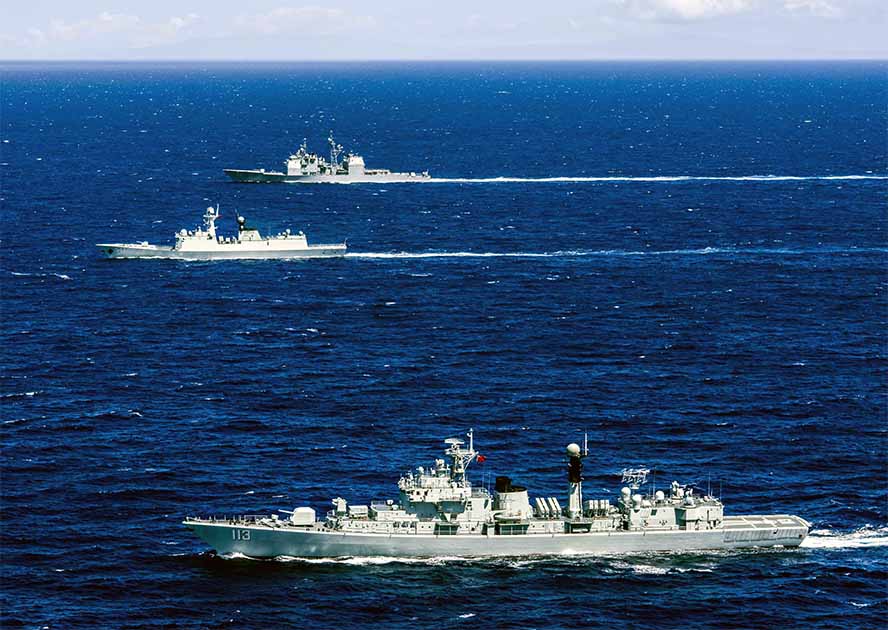 While AMAN Exercises encourage cooperation, build trust and help with interoperability – an operational ability to work together, they also serve broader objectives. These broader objectives include: working with other countries to contribute towards regional peace and stability; demonstrating a united front in terms of combating terrorism and piracy and establishing the growing position of Pakistan Navy in the regional maritime arena.

All of this becomes more important with the progress of CPEC between China and Pakistan. The Indian Ocean, third largest of world’s oceans, spread over 68 million square Km, more than 27 million square miles in terms of the surface area contains almost 20% of the world’s waters.

The trade goods can travel relatively safe on land, the sea route used in BRI needs to be protected from potential threats.

This commercial and energy highway stretches from the Andaman Sea in the east, all the way to the Mozambique Channel in the west, the Flores Sea in the south, to the Persian Gulf in the north.

From a securitization perspective, the quickly developing China-Pakistan Economic Corridor (CPEC) which is the flagship project of Belt Road Initiative (BRI) with the purpose to reestablish the centuries-old Silk Roads, needs protection against maritime threats such as terrorism, piracy and potential proxy conflict in the coastal areas. Gwadar Port, which opens into the Arabian Sea is being gradually linked through roads and rail links across Pakistan, to establish a nonstop trade route to western China.

While the trade goods can travel relatively safe on land, the sea route used in BRI needs to be protected from potential threats. Maritime security and stability obtained through cooperation and developing interoperability with the navies of littoral states thus goes a long way to secure a better and brighter future for all stakeholders.

Global Village Space editorial team appreciates the help it has received from all those researchers and experts who provided facts, clarified the concepts and explained the ideas related to AMAN Exercises.