Former federal secretary highlights the dire need for reform of the police and the ‘thana’ culture which has continued even under the Police Order 2002. He contests that new effective accountability mechanisms are critical to see any further improvement in policing.

Reforms in Pakistan, in the area of governance, especially, have never been based on some well-researched treatise to serve the public interest. On the contrary, they were skewed towards personal biases and interests of some stakeholders or pressure groups who exploited the opportunity to their full advantage.

They scuttled the powers and potential of those elements and entities who could have questioned any act akin to abuse of power by any segment of the administrative machinery. The reforms carried out under the ‘Devolution of Power Plan’ and subsequent legislations, Local Government Ordinance 2001 and Police Order 2002, are a corollary to such interventions.

Both were promulgated without any meaningful scrutiny or public debate. Ironically enough, some of their contents were adopted from the laws of the developed countries. The inherent shortcomings were the major obstacles to their effectiveness. Hence, such dispensation added to the public suffering rather than their alleviation.

People are always fearful of undue and unforeseen harm to be caused, should they approach any police office for redressal of their grievances. The sordid tales of police torture, custodial deaths, extrajudicial killing, and killing of innocent people on suspicion is a matter of routine with all the ranks of the police force.

Whereas, the Local Government Ordinance 2001 has been repeatedly amended, to remove the dysfunctional provisions, by the provincial governments, the Police Order 2002, on the other hand, is being defended, tooth and nail, by the police officers, retired as well as serving.

Every attempt by the government to make some improvement within the context of ineffective accountability mechanisms is always construed as an attempt to jeopardize the ‘autonomy’ of the police force which, they believe, is the ultimate outcome of a great deal of hard work (lobbying) on which no comprise could be made.

Read more: Punjab Police: The tale of Salahuddin might move Govt for reforms

Policing is an exciting chapter of the history of administration in Pakistan. Raised by the same British colonial government, which established all other institutions and organs of state in the subcontinent, police in Pakistan is no different in its origin and culture it inherited from the British Raj days. Following independence, socio-political environments became intricate and complexed, and with that, new challenges emerged against the system of policing.

Instead of improving their professionalism through training and acquiring modern techniques and modules of investigation to combat crime, the police outfits remained complacent. They did not change their obsolete methods and mechanisms. Ultimately, the enormity of the crime and the ever-growing clout of the criminals rendered the police ineffective in maintaining peace and order. 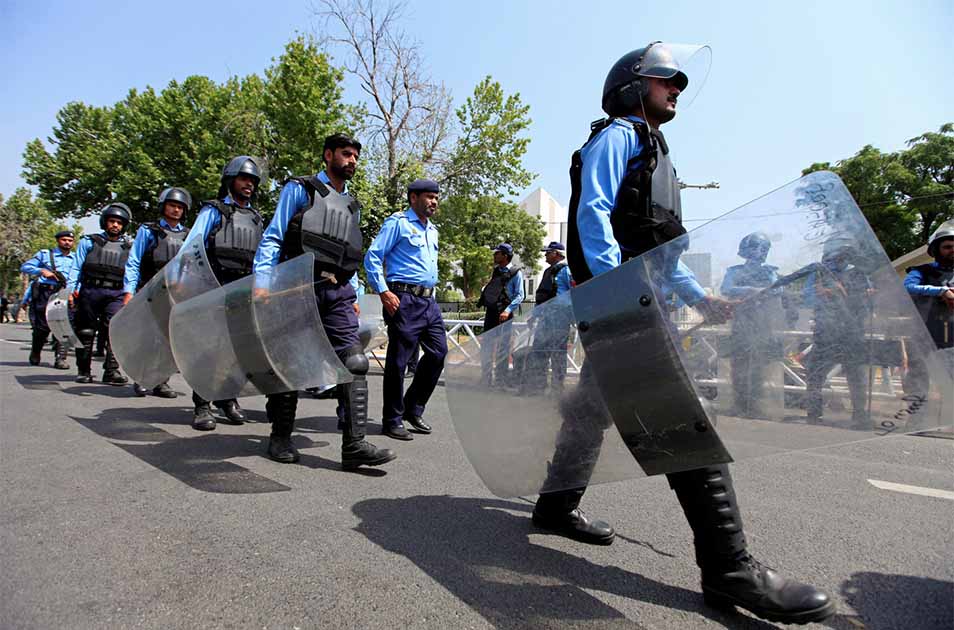 On the other hand, public perception about the police force (of colonial days) did not change, and it continued to be considered as a brutal force known for subjecting people to unimaginable degrees of torture and even killing. The conduct of the police force, thus, devoured the public confidence in the institution to the extent that no one ever took them as people-friendly.

Instead, people are always fearful of undue and unforeseen harm to be caused, should they approach any police office for redressal of their grievances. The sordid tales of police torture, custodial deaths, extrajudicial killing, and killing of innocent people on suspicion is a matter of routine with all the ranks of the police force. Against such a dismal performance of the police, there existed an impelling need to bring about structural reforms in this area on modern and scientific lines.

Whether it was a vagary of nature or some coincidence that during the Musharraf regime, the National Reconstruction Bureau (NRB) was established to carry out an in-depth study in the system of governance to bring about necessary reforms in the administrative apparatus of the country. The opportunity was well exploited by the police officers who took refuge under the argument that the old scheme of policing under Police Order 1861 was the mother of all ills, which ought to be replaced by something modern and innovative to improve the system of policing.

Somehow or the other, their standpoint was accepted, and a new variety of reforms were introduced, which changed the institutional framework, drastically. Among other things, the Police Order 2002 replaced the Police Order of 1861. Before the promulgation of Police Order 2002, a focal group comprising retired and serving Inspector Generals of Police (IGP) pleaded the case of police autonomy from all kinds of external controls, especially, that of the district magistrate.

Terming the Police Order 1861 as deficient in meeting the emerging needs of the police force, it was claimed that the new order was aimed to create a police service, which would be “professional, service-oriented and accountable to people.” Besides, it was stated, “the Government and the Police face challenges of guaranteeing a climate of peace in which people should feel secure in the exercise of their rights and protection of their freedom”.

Things are being dealt with in the same old routine and manner as before, under the repealed order. Their conduct, mindset, and methodologies of investigation and techniques of torture to extract confession are no different from the erstwhile practices.

The new order also borrowed a leaf from the Japanese model of community policing to make out a people-friendly image. For accountability mechanisms, forums having representation (nominations) from a cross-section of people were provided in the shape of Complaint Authority and Citizen Police Liaison Committees (CPLA) at various levels. The promise made by the focal group of the police officers was taken in good stead by the government.

In retrospect, the promulgation of Police Order 2002 seems to be a successful attempt by the focal group, who built their case of police reforms on the debris of Police Order 1861 by presenting it as the primary reason for their inability to transform the police force into an efficient service. In doing so, the police stalwarts also realized their dream of getting autonomy from all sorts of oversight or external controls.

Their claim was very tall, and so were the expectations of the government and the people. However, the gap between promises made and the performance of the police officers under the Police Order 2002, over the years, is widening. A dispassionate analysis of police performance under the new order brings to light the fact that no substantial change has occurred in the service delivery of the police force.

Things are being dealt with in the same old routine and manner as before, under the repealed order. Their conduct, mindset, and methodologies of investigation and techniques of torture to extract confession are no different from the erstwhile practices. The disconnect between the superiors and the subordinates is at the same pitch as it existed before.

The “Thana culture”, wherefrom originate the roots of a corrupt and merciless system, still exits with all its manifestations. Thus, the big question that needs to be answered is: what has changed in real terms, under the Police Order 2002? The much-publicized professionalism is still wanting; the police force’s indifference to the public is a stark reality, and accountability by the people (community) is not yet in sight.

The empirical evidence of police excesses against members of the public bear testimony to the fact that the police officers are now enjoying unbridled and unchecked powers to take any action warranted by any situation. Their gruesome acts amounting to custodial killing or opening fire on innocent people based on suspicion are being dubbed as actions taken in discharge of their professional duties.

The police officers posted in the field are capable of turning things to their favor, even in situations charged with public anger and resentment against them. Their wrenching of ‘Pardon’ from the close relatives of Salahuddin Ayubi, a victim of custodial killing in Rahim Yar Khan, and a clean chit from the brother of the deceased who along with his wife and son got killed under the volley of indiscriminate firing near Sahiwal are the cases in point.

Besides, the poor quality of investigation by the investigators is facilitating mass acquittals. Robberies, dacoities, and incidents of housebreaking are not being reported. Complainants are whisked away from the police stations, and FIRs are not registered with a motive to downplay the soaring number of incidents of crime.

Thus, the issue of accountability of the police force through an effective mechanism has become very salient and critical, under the prevailing situation. Be that as it may, the use of force without any meaningful accountability does not augur well in any setting or system. No civilized society can afford to have any administrative entity, be that the police force or any other security outfit, vested with an extensive set of powers to use physical force without any effective accountability mechanism.

The provisions of accountability of police force under the Police Order 2002 lack the requisite capability to bring the delinquent officers to book. There exists a genuine need to provide neutral and effective bodies to check the abuse of power by the police force. The recent controversy whipped by some groups of police officers over the proposed police reforms about providing some effective system of accountability of the police force ended in bad taste.

The members of the focal group who spearheaded the move to replace Police Order 1861 with the Police Order 2002 have morphed into a pressure group. They unleashed severe criticism on the government functionaries, who under the Rules of Business are required to process all such issues stemming from any such legislation or related matter.

Such an attitude of the police officers conflicts with the golden principle enunciated by the father of modern policing, Sir Robert Peel, who said that “the police are the people and the people are the police”. Hence, responsibility san accountability is a farce and not sustainable under any law. Nobody is above the law, and no organ of state can work without any meaningful accountability.

The members of police service like any other group of public servants should work to serve the public interest and the people for whom the state functions with all its institutions and organs. Police Order 2002 ought not to be considered as something sacred; nothing but the holy works alone achieve finality. Laws are like flowing currents of rivers to which are added fresh streams. Their natural courses must not be blocked to avoid the catastrophe.

Naguib Ullah Malik is a former Federal Secretary and Chief Secretary of Punjab. He has held positions of Additional Home Secretary Punjab (1992-95). He was Secretary Local Government during Gen Pervaiz Musharaff ‘s period and worked on the ‘Devolution of Power Plan’, specifically working on the Local Government Ordinance 2001, amended LGO 2005 and the Police Order 2002.

Sexual harassment now a crime in US military

Why India’s Modi has mixed record of economic management?

US rejects Russia demand on Ukraine

IS claims responsibility for attack in Afghanistan

ATM robber in a viral video died during police interrogation