Aamir Khattak discusses Justice Faez Isa’s case in great detail. He further states how the judgment of the case is a severe setback for those hoping for any sort of accountability in the higher judiciary. 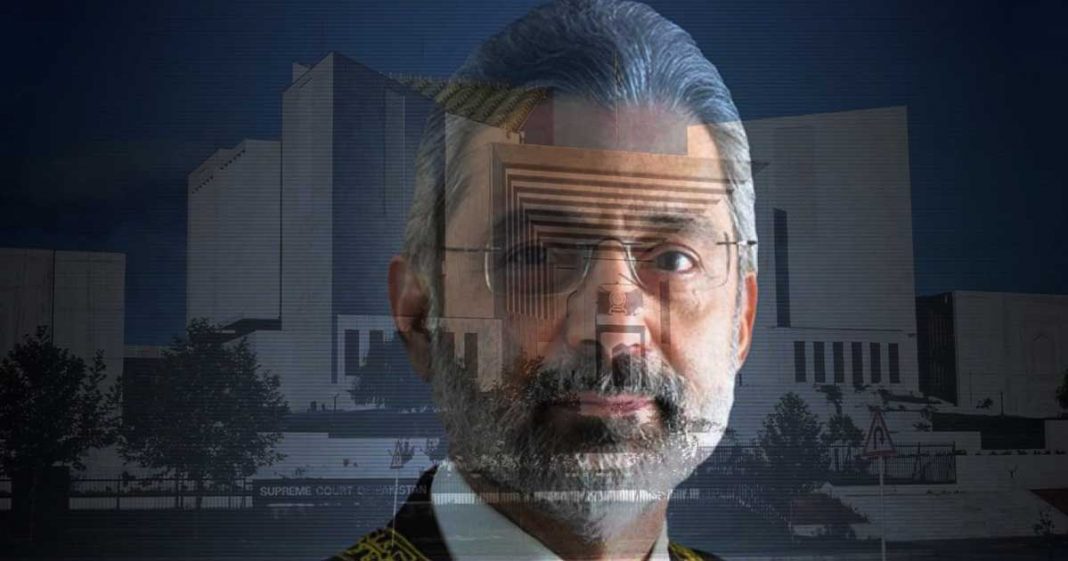 There is no greater tyranny than that which is perpetrated under the shield of the law and in the name of justice. (Montesquieu)

Never in my life have I felt so hopeless and helpless as I did when majority judges of the supreme court’s larger bench set aside the majority judgment given on 19th June 2020 in Justice Faez Isa case.

Interestingly, two judges who were a part of the majority judgment of 19th June 2020 accepted the review petitions filed by Mrs. Sarina Isa and various bar councils. The legal reasoning that led to the acceptance of the review is awaited.

Aitzaz Ahsan who spearheaded the movement for restoration of judiciary claimed that the short order accepting the review virtually exonerated the higher judiciary from all sorts of accountability. A claim contested by those who were fighting vigorously in defense of Justice Isa.

Nevertheless, the judgment is a severe setback for those hoping for any sort of accountability in the higher judiciary.

Historically, Pakistan’s top judiciary has always remained immune to any accountability. But the power usurped by the judiciary after the restoration of Iftikhar Chaudhary has virtually transformed judges of the higher judiciary into holy cows.

Ironically the lawyers who played a galvanizing role in the restoration of the judiciary are equal beneficiaries of the immunity enjoyed by judges of superior courts. The lawyers initially got away from any legal repercussions in different occurrences of hooliganism.

However, lately, the lawyers successfully avoided any adverse legal proceedings or consequences despite mercilessly killing patients in a terrible attack on PIC. Furthermore, I have reasons to believe that those lawyers who attacked the Islamabad high court and made CJ IHC hostage will never face the consequences of their criminal activities.

Some of the leading lawyers involved in the attack on IHC were seen standing beside Justice Isa when he addressed the lawyers of Islamabad bar on 9th April 2021.

The honorable judge highlighted the importance of human rights and upholding of the constitution in his address to the Islamabad bar but chose not to utter a word condemning the attack on Islamabad High Court.

Aitzaz Ahsan while deliberating upon hearings of the review petition pointed out an occurrence that proved pivotal in swinging the opinion of majority judges in favor of the review.

During the hearing on 20th April, Mrs. Sarina Isa while recording her statement claimed that she was condemned unheard in the order of 19th June 2020. On her claim, Justice Munib Akhtar asked her to read her recorded statement of 18th June 2020.

The insistence of Justice Muneed broke Mrs. Isa into tears that upset some of the judges watching the wife of their brother judge sobbing in full view of the court.

That reminds me of a captivating dialogue in record-breaking fantasy drama series on HBO titled Game of Thrones. Cersei Lannister, the most devilish character of the series while advising her daughter in law ruled out tears to be the women’s best weapon.

The proceedings of 20th April 2021 in the supreme court of Pakistan however established that tears indeed are women’s best weapon if shed by the spouse of a judge of Pakistan’s superior judiciary.

Incongruous tears seldom shake the consciousness of our judges if shed by the young children of innocent women killed in Lahore model town in broad daylight.

Read more: Model Town Massacre: Will the victims ever get justice?

Justice Faez Isa has been exonerated by his fellow judges from any adverse proceedings of SJC. Nevertheless, there are some perturbing aspects related to the outcome of this case that deserves anatomization.

The first and foremost fact is that Justice Isa by no means has proved his innocence of the charges mentioned in the presidential reference. Mrs. Sarina Isa’s attempts to justify the purchase of three properties abroad were unconvincing and at times ridiculous.

The truth lied in the FBR report submitted by FBR commissioner Zulfiqar Ahmed. The legal report was declared illegal without any deliberations on the contents of the report by six judges who accepted the review petition of Mrs. Isa.

The contents of that report, however, remain a reality that will not only haunt Mrs. Isa and Justice Isa in times to come but will also cast a shadow on the majority decision of the larger bench.

Another perturbing aspect was the visible inclination of some judges for and against the petition right from the outset of the proceedings. The council of Justice Isa raised objections to the presence of two judges on the bench.

The Attorney General made an explosive accusation by claiming that few judges were privy in drafting/ formulation of the petition. An accusation though retrieved from the proceedings but not from our memories.

Lastly, the claim by Ali Ahmad Kurd ex-president of the supreme bar association lauding three judges of the bench for doing their duty and condemning others for merely drawing salary tantamount to accusing judges of partisanship and propensity.

Such visible inclination makes the arguments and evidence simply irrelevant. That is exactly what happened in the proceedings.

The objections, remarks, and questions by members of the bench, unfortunately, made their inclinations further evident even before their final legal opinion. Surprisingly two judges changed their earlier view of sending the matter to FBR.

We cannot call this change of opinion a U-turn fearing contempt. However, the detailed judgment to be authored by Justice Maqbool Baqir will clarify the reasons for the change of view by these two judges.

Justice Baqir will definitely make convincing legal arguments in justifying a decision that exonerated a fellow judge and his entire family from the burden of justifying the purchase of their properties abroad.

Another worrying aspect is the reaction of different segments to the outcome of the case. There was visible disappointment rather crestfallenness among the most social media activists and bloggers.

Most of the opposition political leaders, members of the bar associations, and left-leaning media fraternity hailed the decision. The judgment was particularly lauded by some of the under-trial politicians facing serious corruption charges.

The impression that some of the political leaders facing corruption charges, unfortunately, see Justice Isa as the savior in rescuing them. The surprising decision in Hudaibya papers mills by Justice Isa further bolsters this impression.

The claim by Aitzaz Ahsan and some other prominent reporters that some of the judges part of the ten-member bench are themselves facing allegations of misconduct in SJC is again a disturbing aspect. The fact that Justice Isa, being a member of the SJC, will be deciding the fate of those judges make this an evident case of conflict of interest.

There is a grave moral aspect associated with the outcome of the case. We expect judges to set up higher moral standards regardless of what legality demands.

A sitting prime minister was disqualified for his inability to convince judges about the justification of his property purchase abroad. Jehangir Tareen, another leading politician, though presented his complete money trail, was still disqualified for keeping his assets in the name of his children.

How can then judges exonerate their fellow judge and his family without justifying the purchase of properties abroad when they compel other public office holders to justify the same.

More importantly, after this decision, the judges may have legal authority but will certainly lack moral authority in inquiring from other public office holders to justice assets in the name of their dependent family members.

Although some political segments and bars are celebrating the outcome of this case, the precedence is disappointing for the cause of justice in Pakistan. Furthermore, Justice Isa recently took two suo moto notices in the public interest. In both cases, the target was prime minister Imran Khan.

There was no adverse outcome of those suo moto notices because Justice Isa wasn’t Chief Justice of Pakistan. That will not be the case in 2023. Justice Isa’s remarks and approach when dealing with cases like the Hudaibya paper mills case compared to the Faizabad Dharna case creates a serious impression of partiality.

His outbursts when referring to PTI’s dharna or Faizabad Dharna compared to his silence over attacks on the supreme court of Pakistan in 1997, attack on IHC in 2021, or attacks by lawyers on PIC will always raise serious questions about his impartiality.

Pakistani masses participated in the movement for restoration of the judiciary to see the justice delivered when the powerful are under trial. The judgment in the case of Pervez Musharraf was the harshest.

The impression for that harsh judgment is perceived to be the detention of judges by the military ruler rather than any other extra-constitutional measure. Similarly, in the Faizabad Dharna case, punitive measures/ proceedings were recommended against DG ISPR merely for dispelling the impression of military involvement in influencing election results in 2018.

Contrary, the higher judiciary has extended unprecedented reliefs in cases of Nawaz Sharif, Maryam Nawaz, Hamza Shahbaz, and Shahbaz Sharif. The different standards of justice will certainly shatter the faith of the public in our justice system which embarrassingly stands at 120th position out of 128th in rule of law ranking of 2020 by WJP.

Justice Faez Isa’s case was a very high-profile case that was supposed to set a benchmark in the accountability of judges of superior courts.

The outcome was extremely disappointing. No matter how many legal justifications Justice Baqir renders in his detailed judgment, still, it will always be referred to as a “Judicial NRO” in our legal discourse.

The author is an MPhil graduate in Strategic and Nuclear Studies from National Defense University Islamabad with 25 years’ experience of serving in defense services. Focuses primarily on International conflicts, security issues, and media narratives. The views expressed in the article are the author’s own and do not necessarily reflect the editorial policy of Global Village Space.

Why Do Humans Dying in Pakistan Matter Less than when Dying in London?

How the extremist mind is cultivated; a psychological analysis

The Ummah : The fresh Princes of Bel Arabia and Muhammad Bin Salman