Professor of Marketing & International Business at Chicago State University makes the case that Pakistan should be building hundreds of small dams and that these projects should be undertaken by local governments in conjunction with local universities and public-private partnerships where appropriate.

Pakistan is a country with great natural water resources, having rivers, lakes, streams, glaciers, rainwater, and floodwater. Implementation of Water Containment and Water Management principles along with the decentralization of administrative powers would allow it to have sufficient water for human, agriculture and industrial consumption.

However, blocking the building of dams, in particular, the Kalabagh dam and other smaller dams has deprived people and the country from proper industrialization and growth. Furthermore, temporary measures undertaken have resulted in underground water being mismanaged causing levels to fall further.

While Pakistan has all the materials and intellectual resources, internal political bickering, a status quo focused bureaucracy, and dependency on central government to take action has created a crisis where more than 70% of the population is exposed to substandard water.

The Indus River route has great potential of building thousands of small to medium dams. The reality is that the world’s water is 97% non-drinkable seawater, 2% water is in shape of glaciers and ice, while only 1% water is for human, agriculture, and industrial consumption. In most parts of the world, countries like China, America and Turkey’s decentralization of power models have been very successful in implementing water containment and water management policies.

While Pakistan has all the materials and intellectual resources, internal political bickering, a status quo focused bureaucracy, and dependency on central government to take action has created a crisis where more than 70% of the population is exposed to substandard water.

Pakistan’s potential: Addressing the issue and solving water problems in the light of “Building Smaller Dams”

In Pakistan, only two large dams have been built since 1947, a period in which China has built more than 60,000 dams. Dams give tremendous benefits for flood control, irrigation, water supply for human needs, electricity generation, shipping, agriculture and economic development. One of the most effective ways to solve the inconsistency between supply and demand of water resources is to build reservoirs and construct dams.

It is vital to invest in dams and smaller grass-root level developmental projects. A study by the World Commission on Dams shows China’s has over 84,000 dams, of which 22,000 are large dams for irrigation and flood control—the most in the world. Large dams are those roughly four stories or taller. Most of China’s dams were built after 1949.

And as the study points out, this translates into one dam built every day since the emergence of modern China. The United States has about 75,000 total dams (over 25 feet high). According to the Association of Dam Safety Office, is the average number of dams per state is 1,800. Based on Pakistan’s topography, land, and waterways, there is a great potential to build hundreds of small to medium-sized dams.

Two major factors have blocked dam-building process and have created a water crisis throughout the country. First is control of resources, funds and power in five hands (one PM and four chief ministers) for more than 220 million people; and second is foreign and local agendas to block dam proposals, creating pressure groups of politicians and bureaucrats to block every essential proposal for any dam.

The Federal Government should draw up a policy to use geology and engineering departments in universities all over the country to develop small dam projects according to their local environment in their respective areas.

In all of Pakistan’s major cities, we see that water resources have been given to “Tanker Mafia”, who provide sub-standard water, making billions illegally and paying little tax. In my childhood, we drank tap water provided in the household by local community water tanks, a phenomenon that still exists worldwide. Yet, Pakistani governments have stopped building these over the past several decades.

Today overpriced and substandard water RO systems by provincial governments have taken people back to the previous century where they often have to take water from an outside source in buckets. Even bottled water must be produced and supplied by a local manufacturer and distributor Nestle.

China progressed in dam building through its 47,000 municipal governments. Turkey did the same through 2,960 city governments; in Pakistan, five people have tight control on funds and lack any water & economic development vision. After the 18th Amendment, Pakistan has been pushed into an even greater water and economic crisis, as provinces did not have the capacity to manage developmental processes.

The bureaucracy has not produced any results since 1947, specifically in basic human services even at the tehsil level. Furthermore, no analysis has been done or media awareness created on how silently and intelligently enemy agenda was promoted to destroy Pakistan’s economy by not building dams and allowing upstream countries to build them first India and now Afghanistan.

I admire the current CJSC for taking his recent bold step on dams, but for 220 million people to prosper we need to follow the Chinese model of building small to medium dams. National interest projects made for the population are not brought up for public debate in China or in the USA. In Pakistan, politicians rant and rave, despite having no information on the matter.

It is much easier to influence 5 people in the whole country through political pressure groups than thousands of decision-makers. China was able to build 85,000+ dams for its 1.3 billion population by decentralizing the system and giving responsibility to its local municipal governments to build dams, in addition to other basic human services, educational and economic developments. 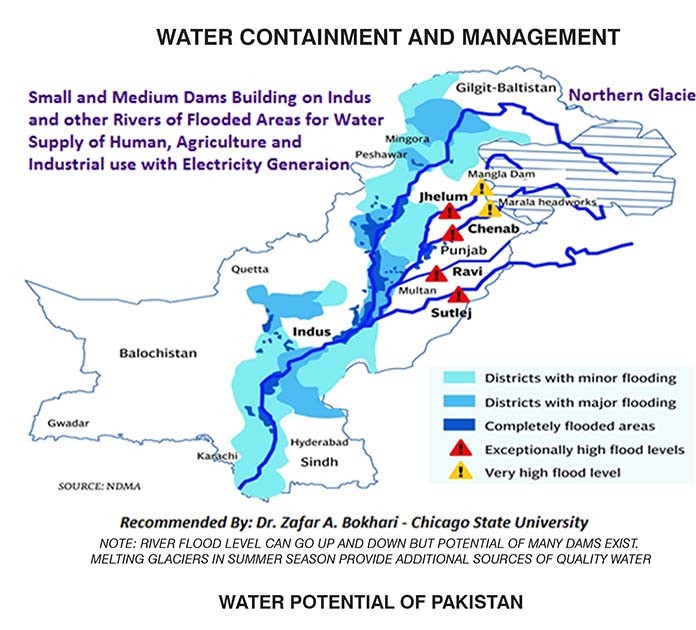 The Federal Government should draw up a policy to use geology and engineering departments in universities all over the country to develop small dam projects according to their local environment in their respective areas. The federal government has to develop water containment policy while implementation should be undertaken by local or district governments.

This will also create jobs in every district for water conservation, containment and management, which ultimately benefit agriculture and industry. Simultaneously, people will have quality water which is their right to expect from governments. Currently, Pakistan’s centralized manner of development has focused only on large dams leaving a huge area across the Indus and other Pakistani rivers untouched; where many small dams and reservoirs could be built.

The country needs to build more than 10,000 small dams, this should be undertaken by local governments according to the needs of the population, with funding help from Federal Government and international funding in addition to deductions from a provincial share of funds.

Dams are the best solution for water containment. After that each city government has to build rain, storm, flood, and river path reservoir or lakes. This will not only add the aesthetic value of the respective communities but provide needed water for community, agriculture and industry.

These smaller dams need to be part of grassroots economic development, under the leadership of mayors, using a local profit model for use of water for irrigation and industry. Water towers can be built, managed, and run for profit by local mayors and city councils under “Public-Private Partnerships”. All flooded areas have potential.

The process is easy, doable, and result-oriented. The decentralized system will also give chance to every mayor to clean and fill lakes for irrigation and agriculture, while industrial and community units can be set up close to dams. Figure 1 gives us a sense of strategic locations for thousands of small dams. However, decentralization of administrative and financial power is prerequisite.

Hydrography of rivers and streams is also an integral part of water management. Most reservoirs in the United States use dedicated stream gauging and rating tables to determine inflows into the reservoir and outflows to irrigation districts, water municipalities and other users of captured water.

River/ stream hydrographs use handheld and bank mounted devices, to capture a sectional flow rate of moving water through a section. Hydrologically, the country can be divided into three main basins, the Indus Basin, the closed basin of the Kharan desert and the Makran coastal basin. The Indus basin is the largest amongst these covering some 576,000 sq.km.

Besides its five main tributaries in the Punjab, the Indus River is also drained by Kabul and its main tributaries Swat, Chitral and Panjkora as well as Kurrum and Gomal rivers of Khyber Pakhtunkhwa Province. The rivers of the closed basins of Kharan such as Mashkel and Zangi Nawar disappear into playas such as Hamun-i-Mashkel and Hamun-i-Lora.

The Makran Coast Rivers, with the two principal Hingol and Dasht, drain into the Arabian Sea west of the Indus River. The northern mountains are where three great mountain ranges of the world meet, the Karakoram, the Himalayas and the Hindukush.

Virtually all elevations here are higher than 3,500 meters above sea level; more than half are above 4,500 meters with more than fifty peaks, which are above 6,700 meters. The area also abounds in glaciers, some of which are the largest in the world outside the polar region. These glaciers feed the Indus River and its tributaries.

After that each city government has to build rain, storm, flood, and river path reservoir or lakes. This will not only add the aesthetic value of the respective communities but provide needed water for community, agriculture and industry.

To achieve sustainability several factors must be tackled at the same time: climate change, rising energy cost, and rising populations. All of these factors provoke change and put pressure on city officials and management of available water resources.

These systems are usually owned and maintained by local governments, such as cities, or other public entities, but are occasionally operated by a commercial enterprise’s participation. Water supply networks are part of the master planning of communities, cities, and municipalities.

Their planning and design require the expertise of city planners and civil engineers, who must consider many factors, such as location, current demand, future growth, leakage, pressure, pipe size, pressure loss, firefighting flows. All this expertise is available in each Tehsil of Pakistan.

Read more: Armed forces to contribute for constructing dams in the country

This encompasses all appurtenances of these utilities including approximately sanitary manholes, storm manholes, rain & stormwater inlets, water valves, and hydrants. The Underground Utilities Department of any City Government is a multi-faceted operation dedicated to improving the quality of life for the citizens through the delivery of safe drinking water and disposal of the resultant wastewater, and conveyance of stormwater to a natural waterway.

The staff focuses on customer service and maintenance of the infrastructure necessary to provide the excellent service that the citizens have the right to have. Small to large city mayors can follow this model by using local engineers and technical labour force to serve the local population instead of Chief Ministers, who cannot focus to the same extent in different areas.

Development of Teams at Tehsil Level for Water Containment and Water Management Performance management linked with engineering models with the help of business function in respective areas will make things happen smoothly.

Universities, local elected officials and local entrepreneurs can bring much-needed change within a year. Since bureaucrats are non-technical and non-business people, their participation must be limited to Federal and Provincial governments. China and the US have hired technical competence based non-elected officials in running the government and specifically in “providing services to people”.