PTI government signs on with IMF – An unavoidable imperative

A former investment banker who has worked in London, Hong Kong, and Karachi explains why PTI had no option but to go to the IMF. He warns that the 2019 budget will bring no magic bullet and tough reforms are the only way for Pakistan to get on the sustained growth path.

Countries that borrow and spend without concern for how the foreign debt will be repaid, inevitably, create a desperate dependence on lenders, who place increasingly harsh conditions to be bailed out. Thus, Pakistan, much like Argentina, has had to go to the IMF for the twenty-first time, although unlike the Latin American nation, it can claim never to have defaulted.

The nine-month-old PTI government under Imran Khan, who had earlier eschewed the idea of borrowing from IMF, has had to agree to sign onto yet another IMF Extended Fund Arrangement (EFF) for about USD 6bn.

Pakistani Rupee vs The Dollar

The bailout package “envisages stronger and more inclusive growth by reducing domestic and external imbalances, removing impediments to growth, increasing transparency, and strengthening social spending”. While the IMF press release may not explicitly say so, the reforms inevitably imply the severe austerity measures that have meant a sharp fall in the Pakistani Rupee against the dollar, from 128 to almost 151, or almost 18% since the PTI government came into power.

The necessary reforms might mean that conditions get worse in terms of the hardships borne by the masses, but the PTI government has little choice to do otherwise.

In order to control inflationary pressures, which will likely accompany the devaluation and help stabilize PKR, the State Bank of Pakistan has increased its policy rates by 150 basis points (bps) to 12.25%. These measures are likely to result in a painful slowdown in economic growth in the coming year, a rise in unemployment as well as those living below the poverty line, and generally, a drop in living standards for the broader populace. 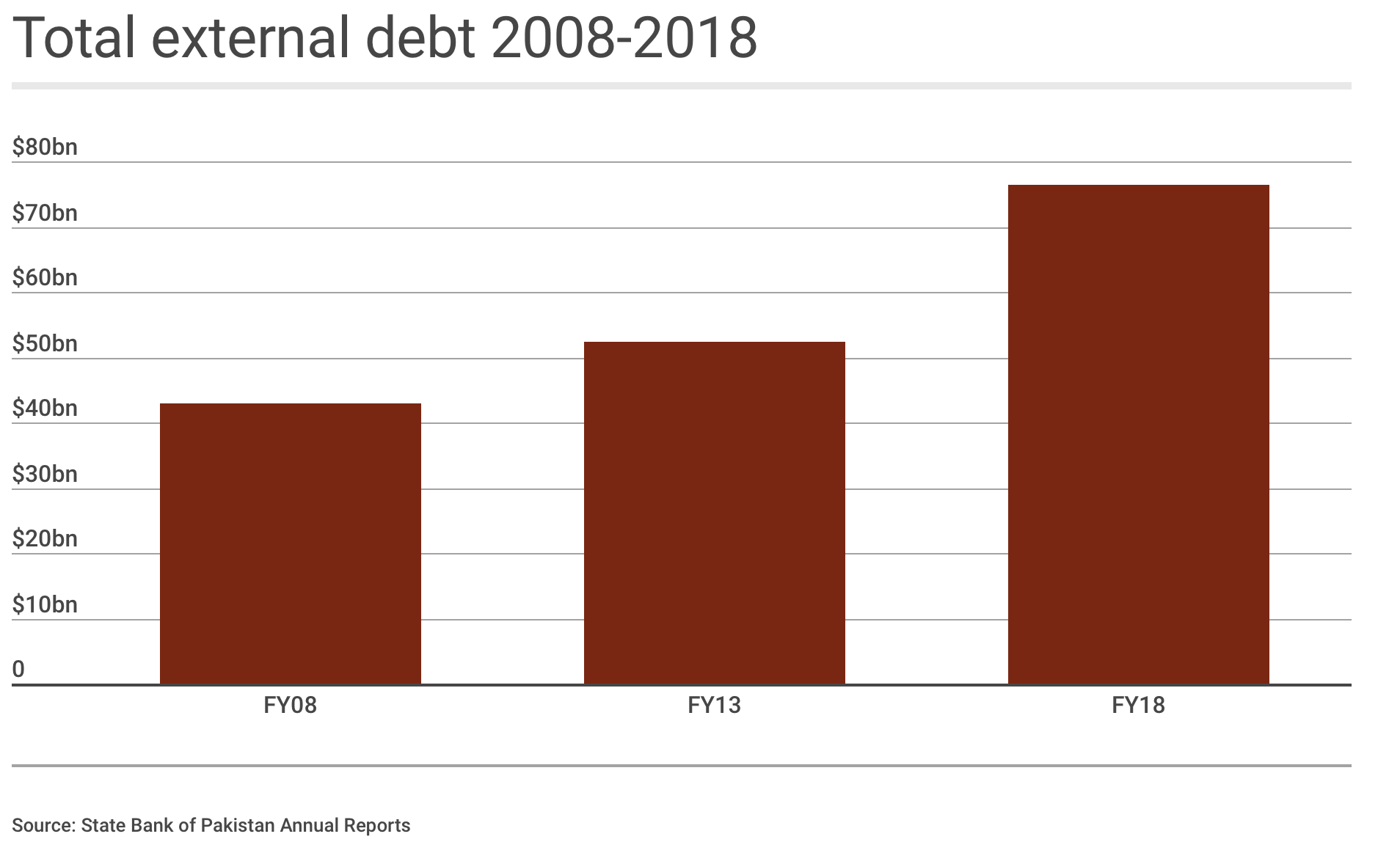 As the IMF press release makes clear, “the challenging economic environment largely reflected the legacy of uneven and pro-cyclical economic policies in recent years aiming to boost growth, but at the expense of rising vulnerabilities and lingering structural and institutional weaknesses.” In more simple words, the economic crunch the country faces today has largely been due to profligate policies of the earlier government.

Rupee wasn’t as bad as it is now?

The genesis of the latest economic crises can be traced to PMLN Finance Minister Ishaq Dar’s absurd obsession with maintaining the Rupee at 104, which meant that the Real Effective Exchange Rate (REER) rose from near fair value of 104 in June 2013 (published by SBP) to a massively overvalued 127 by April 2017. Such gross overvaluation not only stimulated demand for imports, but also ensured the decimation of Pakistan’s export competitiveness.

The nine-month-old PTI government earlier eschewed the idea of borrowing from IMF, has had to agree to sign onto yet another IMF EFF for about USD 6bn.

PML-N’s not so Accidental Mishap

The zeitgeist being to borrow, spend, and let the devil take the hindmost, the PMLN regime merrily crossed the mandatory borrowing limit of 60% of GDP set under the fiscal responsibility and debt limitation act. They had no qualms in taking the total public debt (external plus domestic) to over 72% of GDP by June 2018. 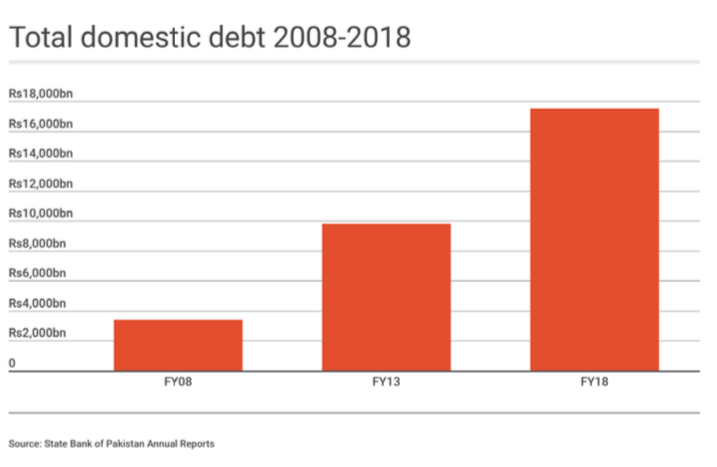 The PMLN ministers knew full well that they were taking the country potentially into a debt trap, but did little to mitigate the associated risks. This delusory bubble burst as the country’s reserves diminished rapidly and servicing external obligations were becoming increasingly impossible. 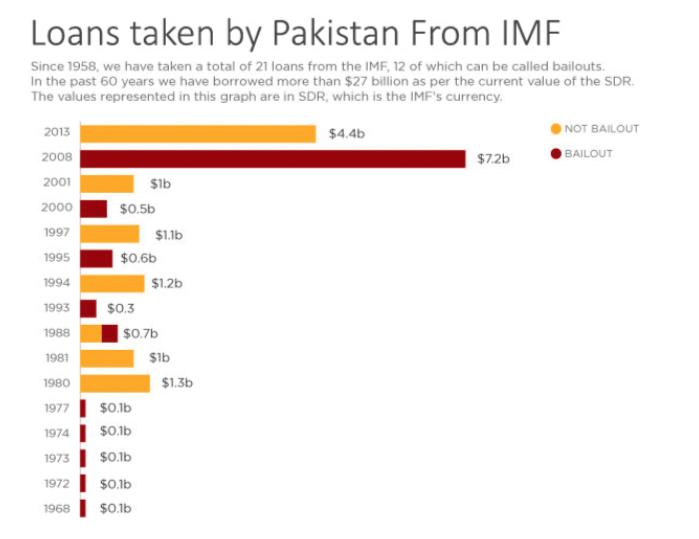 Facing potential repayments of additional approximately USD24bn of external loans in the coming 18 months, PM Imran Khan and the PTI government, despite its earlier reticence, was left no alternative but to accept IMF’s terms for deep structural reforms. Although this has meant expending considerable political capital, the economy is showing signs of responding to the upfront currency and interest rate adjustments as imports contract and current account deficits narrow significantly.

The PMLN ministers knew full well that they were taking the country potentially into a debt trap, but did little to mitigate the associated risks.

It, however, remains to be seen how soon local import substitution industries take off, not only to serve the domestic demand but also generate much-needed employment that PTI had promised in its manifesto. Another critical test to the present government is the burgeoning fiscal deficit, which is at an alarming level of 5 percent of GDP in the first nine months of the current fiscal year, and expected by many analysts to 7.5 percent of GDP for full year.

Who gets to suffer the most?

The upcoming FY20 budget is expected to bring about a slew of new taxes, an end of tax exemptions and cut in expenditure, all adding up to the tune of around 2 percent of GDP or around Rs900 billion. This will mean curtailing many of the initiatives that PTI had promised. Also, in the short-term debt servicing has dramatically gone up with high-interest rates remains thus exacerbating the narrowing fiscal space.

PM Imran Khan and the PTI government, despite its earlier reticence, was left no alternative but to accept IMF’s terms for deep structural reforms.

It is expected that this element of fiscal burden will ease as inflation peaks towards the third quarter and thereafter starts falling. There are no magic bullets in economics and certainly no miracles, but the path to recovery and sustained long term growth can only be attained through tough reforms that invest in the people to improve productivity as well as build a robust export base. 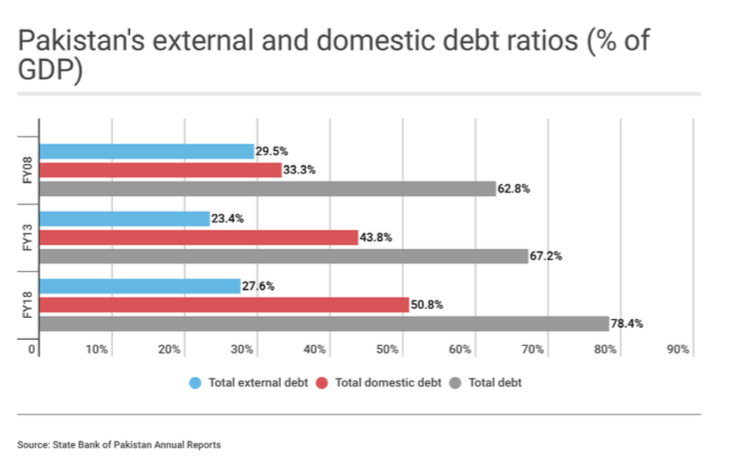 The necessary reforms might mean that conditions get worse in terms of the hardships borne by the masses, but the PTI government has little choice to do otherwise. It hopes that the poverty alleviation program, Ehsaas, helps mitigate some the burden of economic restructuring on those least able to bear it.

It won’t be easy

Reform even in the most benign of conditions is not easy, and especially so after decades of sustained decay in almost every sphere of public policy. The hope is that the economy will respond to the many steps taken towards fundamental structural change that steers the nation to economic rejuvenation. The coming months will test the resolve of the government and willingness of the public to implement and sustain the necessary measures that are long overdue.

Javed Hassan is a graduate of Imperial College London and an MBA from London Business School. He is an investment banker who has worked in London, Hong Kong, and Karachi. He tweets @javedhassan.

Spare: A memoir by Prince Harry

STZA made top priority by PM Shehbaz for tech development

Sino-Russian rapprochement and its limits in Ukraine

Spare: A memoir by Prince Harry