Hum Films’ Sacch is the kind of movie that you get tired of halfway through your first viewing. Nothing about the film is offensively bad, but there is very little that keeps you interested enough to not fiddle with your phone during the movie. The movie is the kind of a Pakistani film that fails because it is trying to be a carbon copy of countless Indian films instead of trying to establish its own identity.

The movie centers on Javaid Sheikh’s two sons, both from two different marriages, who are unaware of the existence of each other and who end up falling in love with the same girl.

The female lead in the film has also had her share of bad luck in life, having a jaded outlook on love after spending her life with her single mother. Predictably, the three characters find a lot of cathartic relief from one another after going through some initial hiccups.

The movie is directed by Zulfiqar Sheikh, who has produced the film with his wife and cast their daughter in the lead role of Elysee. The mere fact that the name of the character is the same as the actress playing her makes it clear that this role was made to launch the career of the newcomer.

Elysee Sheikh is moderately good in the role, turning in an excellent performance for a debut film even though she is often quite expressionless. For better or worse, her male co-leads, Asad Zaman Khan and Humayun Ashraf, who have been in the industry for far longer, aren’t so great that she stands out.

In fact, Ashraf’s acting in various scenes makes you wish that the director had made him redo some of his scenes. Or better yet, maybe cast a more capable actor. Nonetheless, there is no denying that the trio are a handsome bunch, and given that our films tend to prioritize more on looks than skill anyway, they certainly look the part of traditional leads.

Read more: Marriage Story – the finest film of the year

The supporting cast, which includes Jawaid Sheikh, Fazila Qazi and Uzma Gilani, are given next to nothing in the way of dialogues, but they do level up the film with more nuanced performances. Cinematographer Kabir Lal, who has worked on Indian films like Taal and Kaho Na Pyaar Hai, makes the movie look the part of a decent Bollywood movie.

Although that isn’t particularly praiseworthy (especially since the feel of the movie harkens back to older Indian movies), what he does excel in is highlighting the beauty of Scotland where the film is set and which plays an integral role in the look of the characters and feel of the movie. 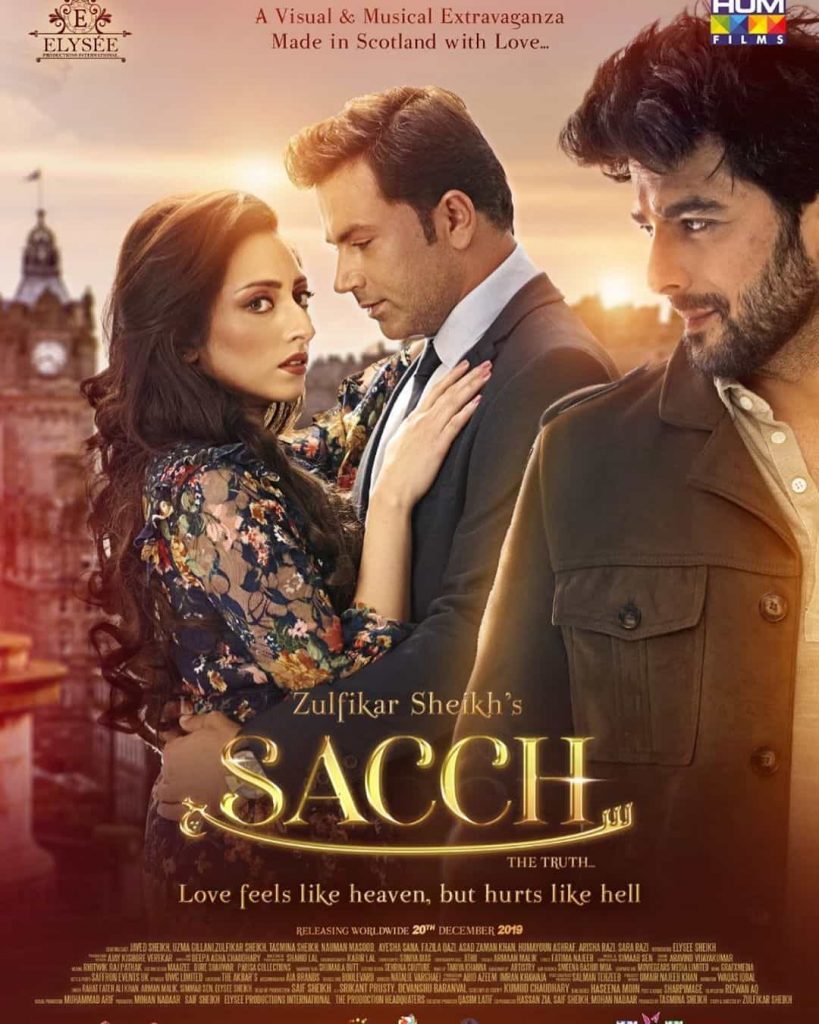 The film’s marketing has focused a lot on the setting of the film, with the logline of the movie being “Made In Scotland With Love”, but aside from providing a pretty backdrop, the movie misses an opportunity to explore the lives of second-generation Pakistani immigrants living there.

A welcome surprise in the movie is its soundtrack, which is pleasant and enjoyable, particularly the title track. Sacch is, in fact, a good example of how a film is saved when its soundtrack is stronger than the plot of the film. Too bad that’s as high a praise you can give this film, considering that the script is far from perfect.

The story is easy to guess from the get-go, and runs out of ideas fairly quickly, making most of the middle a drag. Further editing of the script, coupled with a more stylish direction, would likely have made the overall product a little less dull.

Nothing is refreshing or inspiring about Sacch to stand out from the pack of middling romantic films being produced each year. So, while Sacch probably isn’t the best thing for you to see down at the multiplex, it is also watchable if you’re looking for the Pakistani equivalent of a good old fashioned Indian cheesy flick.

Air Cdre Jamal Hussain - July 11, 2020
Although not explicitly raised for counterinsurgency operations, Pakistan Air Force since its very inception has been called upon to undertake such missions. While at...

Pakistan’s biggest issue is rule of law not corruption

AJK Judiciary: Why not treat it with same respect as in Pakistan?

Will the Chinese Dragon and the Indian Tiger go to War?

Netflix’s Kumail Nanjiani Film: The Lovebirds Is A Winning Comedy

Currency starts growing from trees in US town during COVID-19

2020 Toyota Camry: Most desirable family sedan of this year

Ocean’s 8: A movie that must not be missed