Climate Change and Mismanagement of water resources in Agriculture sector

Climate Change and Water are inextricably linked; a recent World Bank report argues that Pakistan may not be as poor in water resources as it is mismanaged. GVS team analyses the way forward. 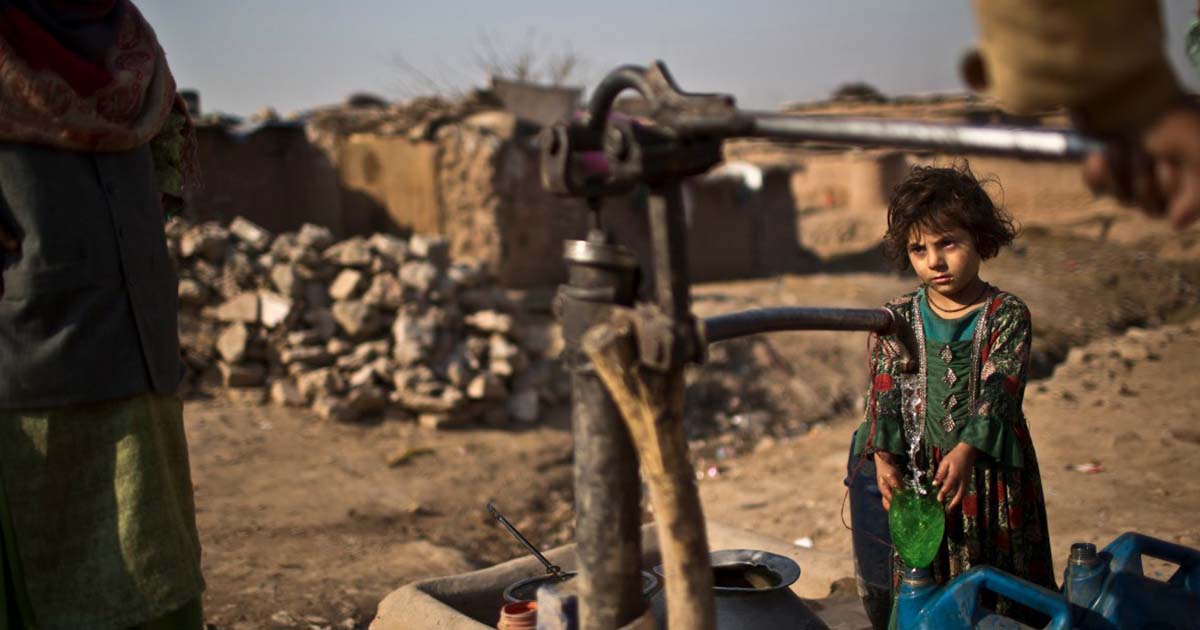 As the World Water day approaches on March 22nd, it is pertinent to bring attention to this shared resource in Pakistan. This year’s theme, Nature and Climate change, explores how water and climate change are inextricably linked. With worsening climatic conditions, water availability is either becoming scarce, unpredictable, polluted, or all three together.

There has always been confusion concerning the current water challenges in the country. There is literature showing how scarcely water is available in Pakistan as compared to studies highlighting how poorly water is managed in the country, both from demand as well as the supply side.

However, a recent World Bank report combines the two phenomena stating that despite being rich in water resources, Pakistan continues to face water scarcity driven by the country’s inability to properly manage, use and protect its water resources for socioeconomic and environmental sustainability.

How does climate change contribute to the water crisis for Pakistan?

As argued by the experts, there is an expected impact of climate change on the country’s growing water demand. Rising temperatures add to the agriculture sector’s already significant water demands. This happens because the evapotranspiration rates increase, followed by a decline in the soil moisture levels in addition to the conventional irrigation practices. It is estimated that more than 90% of the country’s water resources are consumed by the agriculture sector followed by the water wastage in agriculture as high as 50%. 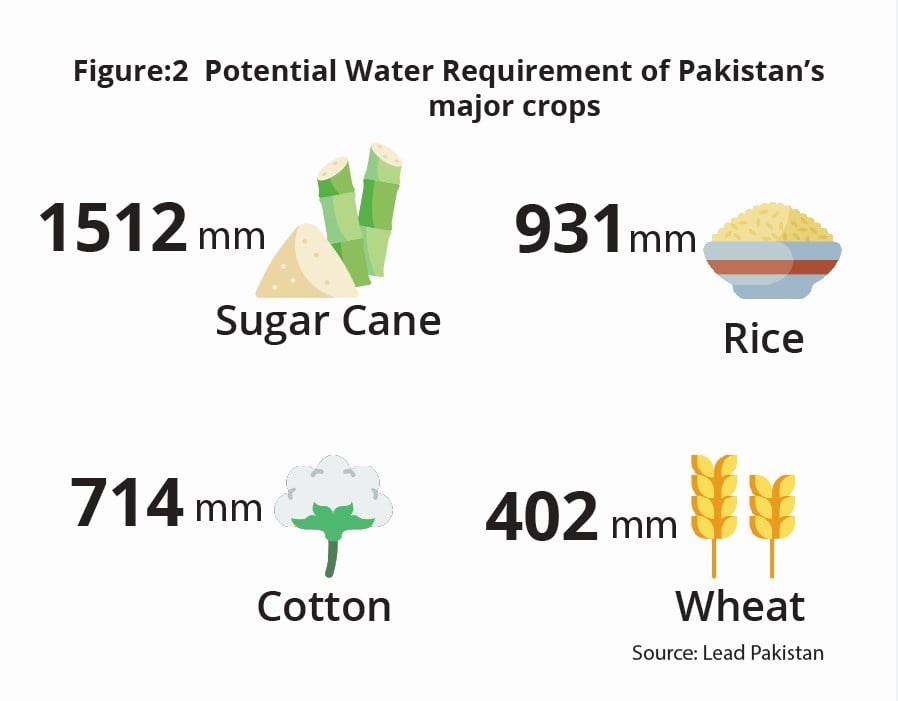 Furthermore, increasing temperatures are also expected to affect power production through thermal means (currently fulfilling about 65% of the country’s energy requirements). Water is the primary resource used during the thermal conversion process. This is why climate change poses an immediate threat to the country’s water resources from the demand side.

From the supply side, the country is overtly exhausting its water resources by ineffective implementation of the national water policy, absence of a climate change policy, improper rationing among its users, water-intensive exports, lack of infrastructure, and innovation.

With the realization that water is a shared resource with collective responsibility, comes the approach to stewarding water resources. It allows organizations to understand their water-related risks and implement strategies to reduce those risks and promote long term and sustainable businesses.

Alliance for Water Stewardship Standard introduced in 2017 is important to mention here. The Standard, called AWS, is an international tool that helps organizations to improve their water use not just individually but also collectively with other organizations and partners.

It is a tool that enables the water users to take combined action in partnership with other players. Adrian Sym, CEO AWS emphasizes upon this aspect of the Standard saying that the foundation of AWS system is its multi-stakeholder governance with a diverse network that can ignite and nurture global and local leadership in credible water stewardship. 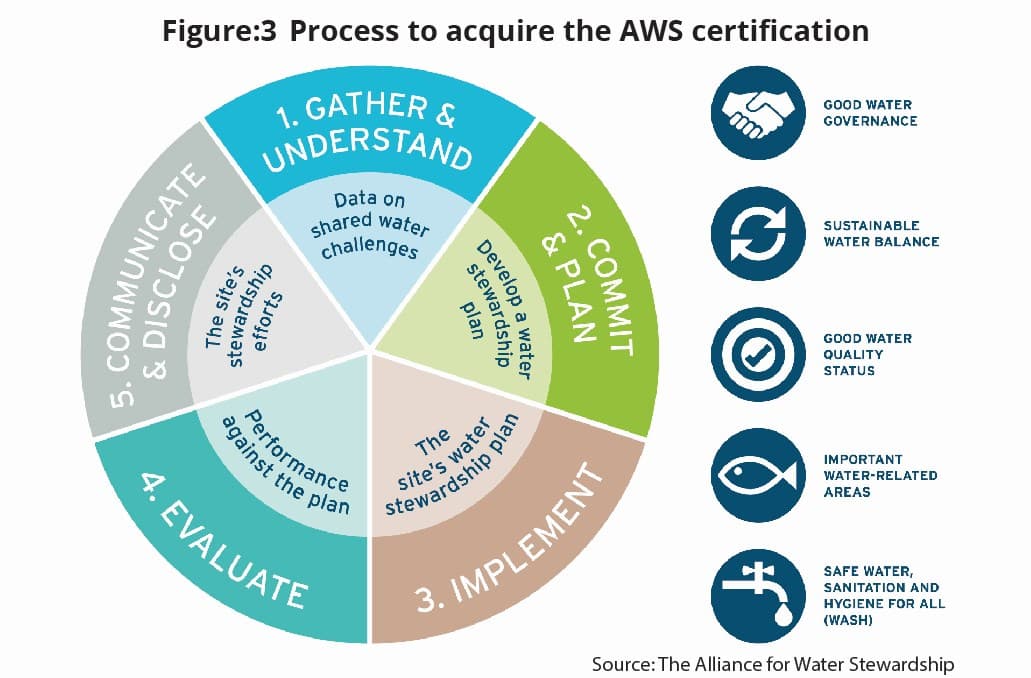 Many private sector entities in Pakistan are beginning to implement the Standard. Nestlé Pakistan has been the first one in the country to acquire certification for one of its factories in 2017.

“Being a food and beverage company, water is critical at each stage of Nestlé’s value chain. That is why our Caring for Water – Pakistan initiative, also called the C4W Pakistan, is its commitment towards saving this precious resource by ensuring collective action” says Waqar Ahmad, Head of Corporate Affairs, Nestlé Pakistan. The initiative has three pillars; Factories, Communities, and Agriculture.

As part of its first pillar ‘Factories,’ the company implements the AWS Standard across all its four sites, in partnership with WWF-Pakistan. Speaking to GVS, Hammad Naqi, CEO WWF-Pakistan says, “AWS Standard allows the site regardless of its size, nature, sector and location to have a consistent and transparent approach towards water”.

Already having achieved the AWS certification for its three locations (Sheikhupura, Islamabad, and Kabirwala), the company is most likely to become the only AWS certified organization in Pakistan after its fourth, and the last factory acquires the certificate early this year.

The World Bank has estimated that Pakistan’s poor water management is conservatively costing the country nearly 4 percent of GDP or around $12 billion annually. These costs are dominated by the cost of inadequate water supply and sanitation, as well as floods and droughts.

Water wastage is high, and agricultural productivity is low in Pakistan as compared to most countries. The four major crops, i.e., wheat, rice, cotton, and sugar cane that use nearly 80 percent of all water generate less than 5 percent of the GDP, around $14 billion per year. 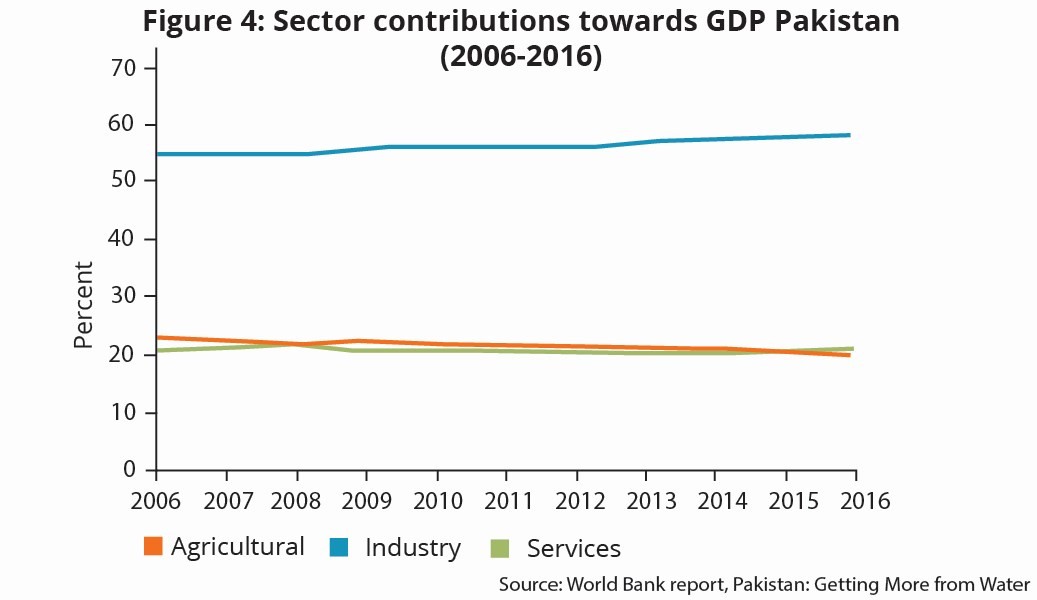 Irrigation in Pakistan is dominated by Punjab (about 73%), which produces significantly more than required to meet the provincial food demand and thus dominates exports, both to other provinces and overseas. Khyber Pakhtunkhwa has a greater reliance on rainfed agriculture, but it imports from Punjab to meet the provincial demand for food.

However, Pakistan’s yields per hectare are very low by global standards. The average yields for the major food crops are 1.5 to 4.2 times below field potential. The Caring for Water-Pakistan talks about this end, as part for its third leg called, ‘Agriculture’ and relevant partnerships in this domain.

Figure 5: How does the Water sensor work 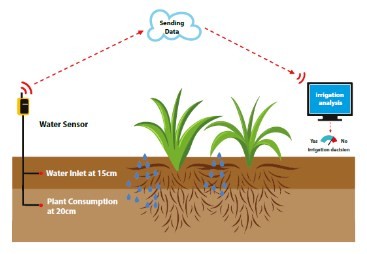 Nestlé has also partnered with Pakistan Agriculture Research Council and developed a site by installing high-efficiency irrigation systems. This site serves as a knowledge hub for students and researchers.

Nestlé has also partnered with Lahore University of Management Sciences (LUMS) and developed smart soil moisture sensors that read the moisture/water level of the soil and send regular data updates to a cloud from where the farmer receives information about which areas he should irrigate and how much.

Moreover, a software has been developed with the help of Waziup (an organization based in Italy) that enables the farmers and the researchers to see the soil moisture level remotely on their computer screen. This helps save water and increase productivity by reducing the chance of under or over-irrigation. Initially piloted at three pilot farms; these sensors have been scaled up to 25 locations (different private farms, institutions and government organizations) as of 2019.

Water security is reaching a critical point in the country, demanding urgent reform. Not only that, the country has to efficiently increase its water productivity but also pay attention to the social and environmental aspects of water mismanagement. Although scarcity comes from the high paced climate change and tense transboundary relations but improving internal water use efficiency and productivity are some of the key opportunities in this regard.

To meet its growing water demands, the government must strengthen water governance and long-term water planning by ensuring collective action with other water stewards like think tanks, NGOs, academia, industries, and so on.

Tools such as Alliance for Water Stewardship (AWS) Standard can also guide the principles of effective water policy in Pakistan, where businesses actively flourish on the principles of sustainable development and are substantially involved to take collective action with other stakeholders.

Nestlé invests millions on a new plant for Fruita Vitals!

Building 5 million houses is as much a challenge as an opportunity: Zaigham Mahmood Rizvi