FATF: Keeping Pakistan on the edge!

The next showdown between India and Pakistan it seems will come between February 16 to 21 during the FATF plenary meetings in Paris, France. Speculation is rife in Pakistani media that the country will come out of the FATF grey list since key western members of FATF (US, UK, Germany and France) have shown satisfaction on Pakistan’s compliance on most of the critical concerns

The next showdown between India and Pakistan it seems will come between February 16 to 21 during the FATF plenary meetings in Paris, France.

India, which holds the vice chairmanship of the FATF Asia-Pacific group, is still pushing for Pakistan to be ‘blacklisted’ as also confirmed recently by the comments of its newly appointed Chief Defence Staff (CDS), General Bipin Rawat, at the Raisina Dialogue 2020.

After the meetings of Asia-Pacific Joint Group in Beijing, China, on January 21-23, that seemed to have gone well for Pakistan, Subramanian Swamy, BJP hawk, Rajya Sabha leader, tweeted:

The US and China have decided to get Pakistan off the FATF “Grey List” instead of upgrading to “Black List” —notified Terrorist Nation. This is a huge set back for India if it happens. Namo should hold a review then to discover why we are sliding down in international stature

Pakistan sources argue that the country has made significant progress on around 22 points of the needed 27-point FATF checklist.

Speculation is thus rife in Pakistani media that the country will come out of the grey list since key western members of FATF (US, UK, Germany and France) have shown satisfaction on Pakistan’s compliance on most of the critical concerns.

Commentaries that have appeared in Indian print media suggest that Indian establishment has lost its earlier hopes of pushing Pakistan into the blacklist and will struggle, in Paris, instead to keep Pakistan in the grey list as long as it can.

Shah Mehmood Qureshi, Pakistan’s foreign minister, has stated that Pakistan has done enough to ensure it should be able to move out of the grey list and has been actively lobbying for backing in regional and international centers.

Pakistan entered the FATF grey list officially in June 2018, after being notified in February 2018. It was initially given until September 2019 to resolve the 27 actions identified as being insufficient in its AML/TF framework

Media reports suggest that his recent trip to Washington was focused on gaining support in FATF. And the issue was raised by PM Khan during his interaction with US President Donald Trump during the annual meeting of the World Economic Forum at Davos. Pakistan needs support from 12 countries out of 39 to vote for it to leave the grey list.

Although the Federal Minister for Economic Affairs Hammad Azhar himself has been more cautious, tweeting it was too premature to speculate on what decision FATF is likely to take in February, which is just as well since some of us remember the tweet by foreign minister Khawaja Asif in February 2018 who prematurely tweeted ‘good news’. 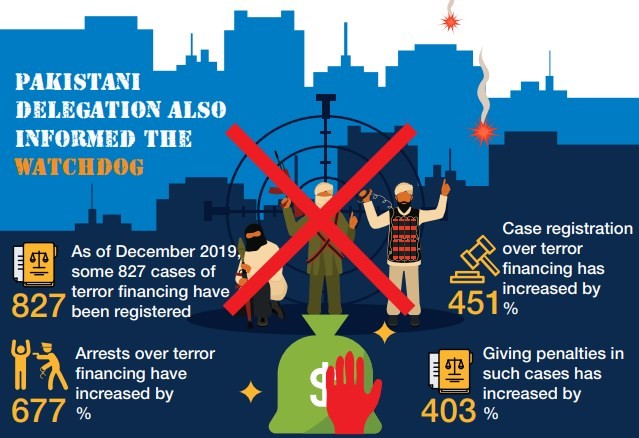 Pakistan has avoided being placed on the global terror-financing watch list and thanked ‘friends’ for their support. Pakistan received stringent remarks from Xiangmin Liu, FATF President in its October 2019 meeting in Paris, who noted improvements but pointed out serious concerns with overall lack of progress by Pakistan to address its terrorism financing risks.

At that time Pakistan was only given credit for making progress on 5 action points. This time around, Pakistan has submitted evidence of being ‘largely compliant’ on most points.

Officials state that potentially two areas may get pushback from FATF as being non-compliant: cash couriers and convictions on terror financing cases Positive comments on Pakistan’s actions on the implementation of FATF requirements have come recently both from the US and China.

Read more: A Pakistani agent in Washington, an American mole in Islamabad

Alice Wells commented that Washington “is pleased to see progress by Pakistan towards fulfilling its FATF obligations” after her trip to Pakistan in January. For Pakistan’s troubled economy, removal from the FATF list will make it easier for it to obtain loans from other multilateral institutions, including the Asian Development Bank.

However, senior analysts – international and local – don’t see the move off the grey list happening so soon. Mr. Yao Wen, Deputy Director, Dept. of Asian Affairs, Chinese foreign ministry, stated in January that the forum of FATF must not be politicized by ‘powers seeking to pursue their own geo-strategic agendas.’

Within Pakistan, most are convinced that FATF is increasingly being used as one of the new tools of geo-strategy, and many also postulate that Pakistan will be kept under stress until it has delivered on Afghanistan and other objectives for the US.

Furthermore, given Indian pressure, most think Pakistan will stay on the grey list until the next meeting in June 2020 and will be asked to show 100 percent compliance with FATF recommendations.

Pakistan entered the FATF grey list officially in June 2018, after being notified in February 2018. It was initially given until September 2019 to resolve the 27 actions identified as being insufficient in its AML/TF framework. In the last meeting held in October 2019, it was asked to show full compliance by February 2020.

Building back Azerbaijan after destruction by Armenia

Pakistani onion to be welcomed by Chinese people: Zhao Lijian

‘No progress’ on eve of Iran nuclear talks: UN agency

Building back Azerbaijan after destruction by Armenia

Pakistani onion to be welcomed by Chinese people: Zhao Lijian

Hemant Karkare: Tribute to a hero