Exclusive Interview: Iran’s Ambassador to Pakistan Ambassador Mehdi Honardoost sat down with GVS Editors to reflect on Imam Khomeini’s vision of Islam on the eve of Imam's 30th death anniversary. The ambassador gives an overview of US-Iran tensions now almost 40 years old and growing fault lines across the Middle East.

Sayyid Ruhollah Mūsavi Khomeini (4 Sept 1902 – 3 June 1989), known to the world as Ayatollah Khomeini, was the founder of the Islamic Republic of Iran and the leader of the 1979 Iranian Revolution that overthrew the last Shah of Iran, Mohammad Reza Pahlavi, who was supported by the United States. This brought a symbolic end to 2,500 years of Persian Sassanid monarchy and turned Iran into a republic and sent shock waves across the region ruled my dynastic monarchs – a conflict that continues to this day.

Following the revolution, Khomeini became the country’s Supreme Leader, a position created in the constitution of the Islamic Republic as the highest-ranking political and religious authority of the nation, which he held until his death. He was succeeded by Ali Khamenei on 4 June 1989 who continues to be seen as the most influential figure in Iranian state. Khomeini was a “marja” – meaning source of emulation – according to traditions of Twelver Shia Islam.

He was thus a “Mujtahid” or faqi, an expert in Islamic Sharia, and author of more than 40 books on issues of religion and ethics but he is principally known to the world as inspiration for the 1979 revolution. In his writings, he preached and expanded the theory of “Welayat-el Faqih” the “Guardianship of the Islamic Jurist”. This principle became part of the new Iranian constitution after being put to a referendum.

Though Khomeini returned to Iran from exile in Paris and was Time magazine’s Man of the Year in 1979 for his international influence but initial western appreciation could not materialize into any stable relations with the west. Imam became identified for his support of the hostage takers during the US Embassy hostage crisis, his fatwa calling for the murder of British Indian novelist Salman Rushdie and for referring to the United States as the “Great Satan”. GVS talks to Mehdi Honardoost, Iran’s Ambassador to Pakistan at the 30th anniversary of Imam Khomeini.

Read more: ‘Flight of the revolution’: the Ayatollah’s return to Iran

GVS: Excellency! 30 years have passed since the death of Imam Khomeini, such a long time usually gives way to revisionist thinking; how do Iranian people and intellectuals now reflect back on his life, his role in shaping the Islamic revolution of 1979 and his impact on Iran, on the Muslim world and the world at large?

Mehdi Honardoost: Look, the difference between religions schools of thought and common political practices is that religious ideologies are formed on the basis of permanent principles, and are not influenced by the current issues or personal views; that might be under review over the passage of time. But, normally, a democratic based society will be affected by the situation in every period.

Now after 40 years since the victory of the Islamic Revolution in Iran, a total number of 40 elections have been held in Iran including presidential and parliamentarian elections and elections for Islamic Council of experts and city villages councils therefore, one can see that whereas the system of the Islamic Republic is based on the principles of divine rules, but a the same time executive issues arising from the vote of the people, through the legislative and consultative bodies, are being considered and reviewed over time.

GVS: Mostly world remembers Imam Khomeini as a revolutionary that overthrew the monarch of Shah of Iran, but he was a scholar to begin with, wrote more than 40 books and was considered a “Marja”; how this teacher scholar turned into the biggest revolutionary of the last quarter of 20th century?

Mehdi Honardoost: Imam Khomeini (peace be upon his soul) was a great Marja, an outstanding thinker, jurisprudent, mystic, philosopher and cleric leader. He played a pivotal and central role in the leadership of the Islamic Revolution of Iran. After decades of struggle in the field of theory and practice, and authoring more than forty books on ethics, jurisprudence, mysticism, philosophy, hadith, poetry, and commentary, his character had reached a degree of perfection and excellence that, in addition to leading a great revolution, he presented a new face for Islam to the world. 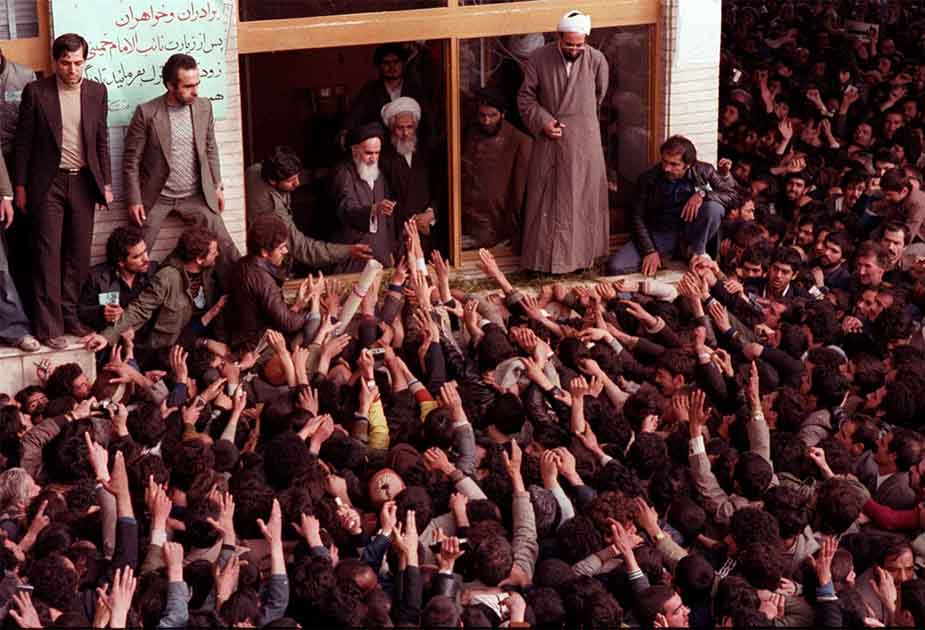 Islam is revolutionary in the thoughts of Imam Khomeini: it is an Islam which considers the establishment of an Islamic state necessary for the implementation of divine laws on earth. Revolutionary Islam does not accept the Taqooti structures (Non-divine rule) and believes that various political, social, economic, and cultural structures must be rebuilt on the basis of divine law.

GVS: What is “Velayat-e-Faqih”? How come it has become part of the constitution of Iran after the revolution when it was not practised anywhere in the Muslim world and not even in Iran before the revolution?

Mehdi Honardoost: Velayat-e faqih is a theory in Shiite jurisprudence that expresses the legitimate political system during the absence of Imam. According to religious evidence, the formation of an Islamic government, a government based on divine rule, is necessary. At the top of this government, there should be someone who is competent in understanding divine rule and who has the privilege to solve the problems of society. This is called Valie-Faqih in the Islamic jurisprudence. After the Islamic revolution, Velayat-e faqih was added to the Constitution of the Islamic Republic by the Council of the Elites.

GVS: Iran sees itself a democracy with regular elections and elected leadership but most in the west see Iran as a controlled system with selected leadership; perhaps because of the overarching role of the institution of Supreme leader, how Iran responds to this concern?

These experts consider all the qualified jurisprudents as discussed in Articles 5 and 109, and consult with one another about them. If they find one of them the most knowledgeable about the rules and subjects of jurisprudence, or political and social issues, or acceptability by the public, or significance in any one of the qualifications indicated in Article 109 of the constitution, that person shall be selected as the leader; otherwise, one of the Experts is chosen and declared as the leader.

GVS: American publication, Time Magazine, had put Imam Khomeini on its cover page in 1979 as “Man of the Year” as the most influential man of the world. Was he initially perceived as a new leader of change west could work with?

Mehdi Honardoost: Imam Khomeini was a multifaceted leader. He was not only a revolutionary leader but also a popular religious Marja in the Muslim world. Many people from all over the world, even from within Western societies, were attracted to his charismatic and influential personality. The ideology of the Islamic Revolution is a universal ideology with global aspirations to defend the oppressed and to resist any tyranny and dictator.

Therefore, any country where its rulers were bullying dictators and imposing their views on other countries, were not prepared to accept the invitation to the right path. It is normal that colonial and bully governments could not come up with a revolutionary call with the motto of independence and freedom of the oppressed masses.

Mehdi Honardoost: The Iranian people have very bad memories of the Americans, which are not forgettable. The behaviour of Americans with Iran and their actions have been very bad. The history of the recent century has been fraught with US intervention and pressure from the coup to overthrow the Iranian national government through cruel pressure and sanctions.

For a country that has several thousand years history of civilization, its dignity and authority have been shining in a very long period of time, during which many modern countries did not even exist, such bullying and interventionist behaviour is not tolerable or acceptable.

GVS: US imposed sanctions have seriously affected the Iranian economy, its citizen’s quality of life and its role in the world; how can Iran find a way forward towards normal relations with the western world?

Mehdi Honardoost: The issue of sanctions against Iran is not a new issue. For 40 years, these sanctions have been imposed on the Islamic Republic of Iran, and if these sanctions were to be effective, they would have achieved their goals by now. Iran is a big country and has its own economic-commercial relations.

Mehdi Honardoost: Iran’s decision is fully consistent with the JCPOA and within the terms foreseen by it. Indeed, as you mentioned, violations by the US administration, and recent provocative actions, inter alia, the US decision to halt Iran’s oil trade and sanction international nuclear cooperation with Iran and in the absence of effective and meaningful measures by the other JCPOA participants to remedy the most devastating effects of US sanctions, the Islamic Republic of Iran has decided to undertake practical measures to exercise its recognized rights under Paragraphs 26 and 36 of the JCPOA. In this context, Iran decided to “cease performing its commitments in part” as of 8 May 2019.

GVS: How can Muslim countries like Pakistan help resolve the current stand-off with the United States and Saudi Arabia?

Mehdi Honardoost: Given the importance of advisory and dialogue mechanisms between the countries of the region, this can be achieved by adopting and implementing a united, coherent and comprehensive approach. One of the golden principles of the foreign policy of the Islamic Republic of Iran in the region is the convergence and unity of countries within the framework of good neighbourliness and cooperation aimed at establishing peace and stability, and in particular, strengthening interactions in the Muslim world. This should be done by activating the resources and capabilities of the Muslim communities and ending the military and political presence of foreigners in the affairs of the region.

GVS: Tiny Qatar is a unique country; it maintains the largest US naval base in the region, but has good relations with Iran and offers mediation; Is this helpful? Is a breakthrough expected?

Mehdi Honardoost: Decision-making on political issues is a matter of sovereignty in any country and solely within the competence of the state and people of the same country. Qatar’s positive attitude toward the Islamic Republic of Iran is made upon its realistic view of Iran’s goodwill in foreign policy and good neighbourliness and interaction with its neighbours. Concerning mediation, according to the explicit position of the Islamic Republic of Iran, when the United States continues to maintain its irrational pressures on Iran, there is no possibility of negotiation. Therefore, in such a situation, there is no need for mediation.

Mehdi Honardoost: The Islamic worldview of Hajj is a symbol of the unity of the Islamic Community. One of the divine goals in organizing the Hajj is that Muslims should gather around the axis of the common principles of Islam and avoid the disunity that has come about today for the Muslim Community. The division and disagreement between Muslims give the enemies of Islam the opportunity to carry out their goals.

Moonis Elahi, Imran Riaz throw shade at each other on Twitter