India and Australia sign a pact that would strengthen security ties, among others. Analysts say it is a manifestation of the two nations' ire at growing Chinese influence in the region. This follows rapidly deteriorating relations of the two countries with China. Can this security arrangement halt Chinese influence? 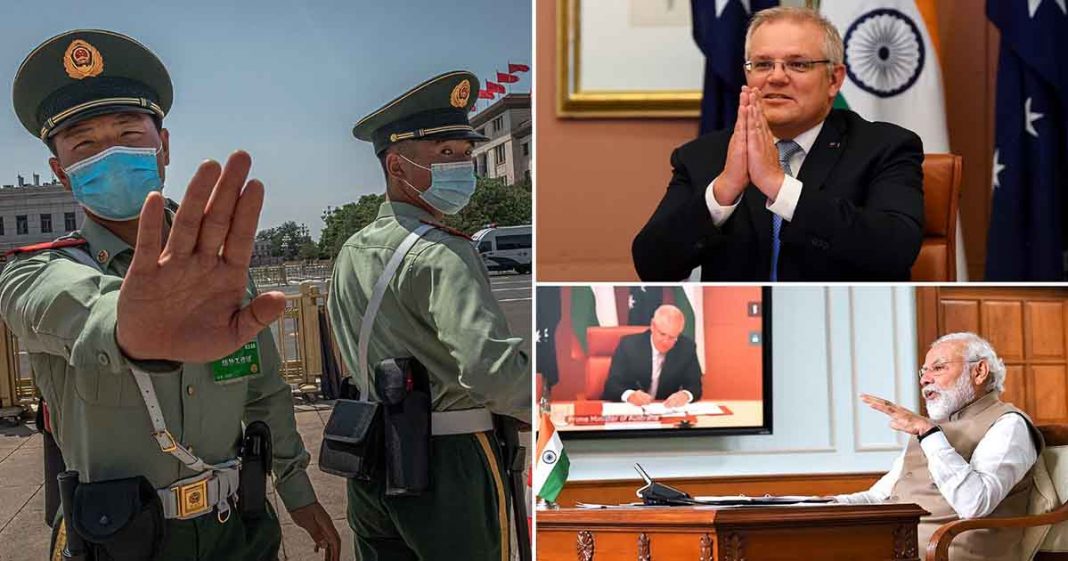 India, Australia strengthen security ties on Thursday, including sealing a pact to boost military logistics support and maritime cooperation, as both nations experience heightened tensions with regional superpower China. China has been increasingly projecting beyond its borders, a move which has irked Western nations and neighbouring India.

In a virtual summit held online as the coronavirus pandemic restricts international travel, the two leaders signed a Mutual Logistics Support Arrangement as they hailed an upgrade of their strategic partnership.

“This is important not only for our two nations, but is also needed for the Indo-Pacific region as well as for the world.”

His Australian counterpart Scott Morrison added that “in a time like this, we want to deal very much with friends and trusted partners”.

The foreign and defence ministers will now meet at least biannually to discuss strategic issues, the two nations said in a joint statement.

Other agreements on education, mining, and defence science and technology were also inked during the summit, which took place after two earlier scheduled visits by Morrison to India were postponed because of the Australian bushfires and the pandemic.

Canberra has been at loggerheads with Beijing after Chinese anger over Australia’s push to probe the origins of the coronavirus.

Modi noted it was the “sacred responsibility” of India and Australia to uphold democracy, rule of law and respect of international institutions.

Agreement may allow access to bases and ports and strengthen defence ties as both nations face tensions with an assertive China https://t.co/T4U5PCULbL

Tensions have flared in recent weeks between India and China over their 3,500-kilometre (2,200-mile) frontier which has never been properly demarcated, with both sides said to have moved in hundreds of extra troops.

A senior Indian foreign ministry official told reporters in a media briefing later Thursday that “there was no discussion on China” in the summit.

India and Australia security ties: Is China the common denominator?

But analysts said Beijing’s increasing assertiveness in the region, as well as ongoing US-China tensions, was pushing India and Australia closer together to mitigate some of that risk.

“I didn’t expect these two would mention the ‘C’ word, China, but it was very much at the back of their minds,” Asian Studies Adjunct Professor Purnendra Jain of the University of Adelaide told AFP.

“Both the prime ministers are very much aware that these are turbulent times, and to deal with these times, we need to do something together. This is about coronavirus and free trade, but this is also very much about dealing with China.”

The talks are also expected to strengthen a quadrilateral partnership that includes Japan and the U.S. and is seen by analysts as part of efforts to contain China’s influence in the Indo-Pacific.

Chinese investment in India soars in spite of boycott calls

Why Pakistan needs a ‘Private Army’?