Netflix’s Kumail Nanjiani Film: The Lovebirds Is A Winning Comedy

The Lovebirds by Paramount Pictures was initially headed for the big screens before the COVID pandemic led the studio to scrap those plans.

Netflix’s penchant for producing unoriginal romantic comedies is well documented at this point. The streaming service has invested in several romantic films ranging from the truly horrendous (The Kissing Booth, The Perfect Date, The Knight Before Christmas) to more inspired choices (Someone Great, Set It Up, Always Be My Maybe).

What Netflix has deservingly earned a reputation for, is bringing people of colour to the forefront in a genre previously exclusively dominated by white men and women. Here it continues this with two HBO breakouts: black actress Issa Rae from Insecure and South Asian actor Kumail Nanjiani from Silicon Valley, both of whom shine in every scene of this oddball comedy.

The Lovebirds by Paramount Pictures was initially headed for the big screens before the COVID pandemic led the studio to scrap those plans. However, Netflix is a perfect home for the movie, especially since the last comedy-murder mystery hybrid, Murder Mystery—also a pairing between two comedic actors Adam Sandler and Jennifer Anniston turned out so well – did some good numbers for the service. Whether The Lovebirds is a big hit out of the gate for the streaming service remains to be seen, but it will no doubt become something that will delight viewers whenever they discover it.

The film is based on the events of one wild night in the life of a couple on the verge of breaking up. Nanjiani’s Jibran and Rae’s Leilani are two extremely uncool individuals who get embroiled in a murder mystery and spend the day figuring it out to avoid getting arrested.

Similar scenarios have played out in movies before and The Lovebirds almost feels like a 2020 update to films like Date Night or Killers. One could even argue that there’s nothing too novel about The Lovebirds’ premise but the movie packs in enough character development and reflection that the journey ultimately feels worth it.

Sure, there was more that could have been done with the movie’s story, given the calibre of its two stars. However, the movie is riotously funny, with Aaron Abrams and Brendan Gall’s whip-sharp screenplay managing to make its characters feel real even as they find themselves in increasingly outrageous circumstances. Even as the movie does stumble towards the end, Nanjiani and Rae are so charming on-screen that they make sitting through the bumps on the film worthwhile. 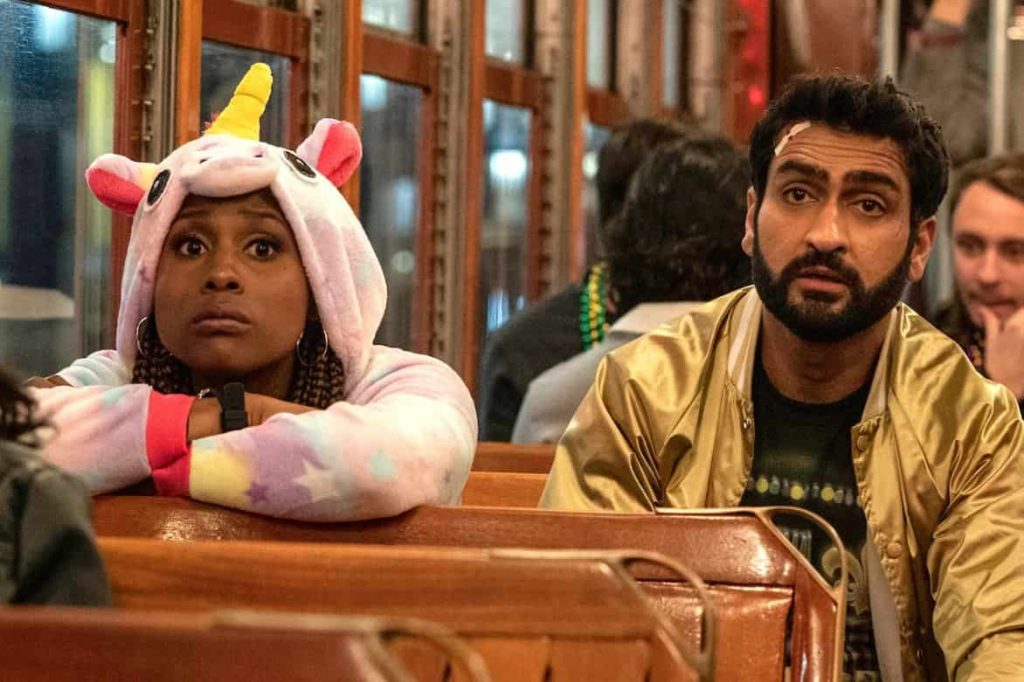 In other words, Lovebirds is more a star vehicle for Kuamail Nanjiani and Issa Rae than an amazing romantic movie. Their banter and dry humour keep the film buzzing through the more predictable and weaker twists in the film. They play off of each other in the rare sombre moments of the film as well as the playful ones.

Both have delivered far greater performances in past works but are on track for becoming even bigger stars with the Pakistani-American actor even landing a Marvel gig. So seeing a scene where the two belt out Fireworks to calm down their nerves does make one wish that the writers had added in more organic and heartfelt scenes.

Other cast members, such as House of Cards’ Paul Sparks and Pitch Perfect’s Anna Camp don’t have a lot of screen time as the film wisely decides to stick to fleshing out its two protagonists and keep them centre focus. Again, while this does lead to The Lovebirds committing the comedy movie sin of turning its secondary characters almost cartoonish, less focus on them keeps the film afloat.

Part of the attraction of the film is seeing the two behave like normal people in a wild goose chase. The Lovebirds will also work for male viewers who won’t have to suffer through something that’s too cringy and romantic. While not likely to be anyone’s favourite movie, the star power and winning chemistry between its leads makes this one of the better Netflix films to come out in some time.