When the first Frozen hit theatres in 2013, it was unfathomable to think it would go on to become the highest-grossing animated picture of its time. It spawned a broadway hit, several animated shorts, won multiple Academy and Grammy Awards and became a part of our pop culture mainstream in the latter part of the decade.

Naturally, it was only a matter of time until the studio would greenlight a sequel to the animated musical. Featuring the voices of Kristen Bell and Idina Menzel in the lead roles of Anna and Elsa, Frozen 2 picks up sometime after the events of the first film. The Disney sequel continues the story of Elsa, now a queen of Arendelle, as she uncovers the true meaning of her powers.

While the first Frozen was refreshingly endearing in how it handled familial bonds and was quirkier than it was given credit for, the sequel is a step back even as it continues redefining what classic Disney films are supposed to look and be like.

Where the first film cleverly handled the estrangement and eventual reconciliation of the two sisters, as well as their fairly uncharacteristic (for a Disney film at least) feminist personalities, Frozen 2 doubles down on all the points it is making without any of the nuances that helped make Frozen a hit among adults as well.

Elsa’s journey of self-discovery is quite literally that, all over again. Although the first film handled her coming into her own sufficiently well, the sequel struggles to give us another compelling reason to watch our heroes suffer through the far less interesting predicaments.

Similarly, if the first Frozen film didn’t get into your mind that the movie was about sisterhood, fear not, for the sequel features plenty of unnecessary pep talks of how the two siblings always need to look out for each other.

The biggest victim in all this is Anna, the more “mundane” and technically less interesting sister, who was the beating heart of the first film. Frozen 2 leaves Anna on the sidelines, waiting for Elsa to disappear a little before jumping out of the bushes and hugging her sister.

Yes, the movie does give Anna a solo number and a few seconds in the spotlight to prove that she, too, has a strong warrior within. But for the most part, the film neglects her to focus on a pointlessly complicated plot. 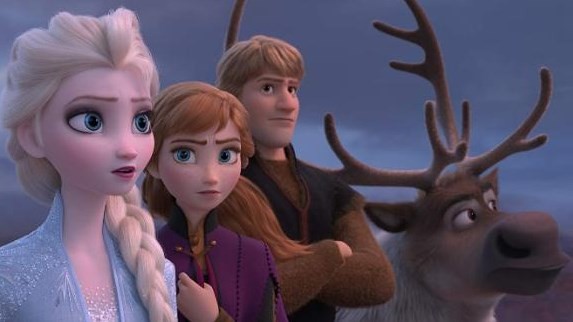 There is no reason why this film should be such a massive let down given that all the key players in the movie are the same. Yet, where the first one had the makings of an instant classic. 2019 follow up tries too hard to make us care about a mythos that is never too compelling, to begin with, despite the basis of a solid foundation.

Though it does move the character arcs and overall narrative of both characters along, it does so in a way that feels indescribably colder than the first film. The side players that made 2013 a hit are all present: Olaf, the hilarious Josh Gad voicing a walking talking snowman, is just as potent with the laughs as before as well as Kristoff (Jonathan Groff), now Anna’s boyfriend with his trusty reindeer.

Both are good supporting characters, and the film finds a smart way of nodding at their expendability and is gracious enough to give them a scene or two to shine in. New characters aren’t as vividly imagined as the first bunch, but that should be expected from a sequel where original elements never click on their own.

Even the new songs are infinitely weaker than the first soundtrack, and it is no coincidence that Frozen 2’s music has been unable to connect with the masses on any level whatsoever.

All in all, Frozen 2 is a sophomore slump that is likely to get more noticeable with time. Despite great pains taken to ensure that our lead characters are growing with the series, the sequel lacks the heart and subtle charm of the first film.

Magazine Desk - March 28, 2020
As far as video game adaptations go, Paramount’s Sonic The Hedgehog is not the worst by a long shot. The movie based on the...

Birds Of Prey: Brilliant yet a recipe of failure?

Climate Change and Mismanagement of water resources in Agriculture sector

Agreement for Bringing Peace to Afghanistan

Pakistan’s Unusual and Unprecedented Food Inflation – What is driving it?