A senior fellow at Nanyang Technological University’s S. Rajaratnam School of International Studies expounds on the role the World Cup 2022 in Qatar and football crazy populations in the region can play as catalysts that help to melt the GCC boycott against Qatar.

It was on the soccer pitch that 2022 World Cup host Qatar definitively shrugged off the UAE-Saudi-led economic and diplomatic boycott of the Gulf state as the crisis entered its third year with no prospect of resolution. World soccer body, FIFA’s abandonment of Saudi-United Arab Emirates-backed, plans to expand the 2022 World Cup from 32 to 48 teams just days before the boycott’s June 5 the second anniversary could not have come at a more opportune moment.

The FIFA decision came on the heels of Qatar’s unexpected winning of the Asian Cup and was followed by reports that the Gulf state’s sovereign wealth fund was negotiating the acquisition of British club Leeds United. The acquisition would give Qatar a second top European team after Paris Saint-Germain and potentially take the soccer aspects of the rift to the English Premier League, home to UAE-owned Manchester City at a time that soccer has emerged as a battlefield in the Gulf rift.

The FIFA decision came on the heels of Qatar’s unexpected winning of the Asian Cup and was followed by reports that the Gulf state’s sovereign wealth fund was negotiating the acquisition of British club Leeds United.

So would a possible Saudi acquisition of Manchester United. The soccer pitch has been but one venue on which Qatar has been scoring points. Three years into the boycott, Qatar’s detractors – Saud Arabia, the UAE, Bahrain, and Egypt — have failed to either force Qatar to accept demands that would have undermined its independence and sovereignty or convince the international community of the legitimacy of their approach.

On the contrary, Qatar is thriving economically, having with the help of Oman, Turkey and Iran compensated for the rupture in logistics caused by the breaking off of air links with its detractors and the closure of its only land border with Saudi Arabia. Moreover, rather than being internationally isolated, Qatar has succeeded in deepening relations with the world’s major powers – the United States, China, Europe, Russia and India – and reinforced its position as a mediator or key player in conflicts ranging from Afghanistan to Gaza.

Ironically, Qatar has been able to turn the Gulf crisis into one of the few issues that the world’s rivaling powers agree on and fortify the cul de sac in which its detractors find themselves. Washington, Beijing, Moscow, Brussels, and Delhi all want the Gulf crisis resolved but have failed to convince Riyadh and Abu Dhabi that everyone would be best served by a resolution that allows all parties to save face even if it falls far short of the boycotters’ demands.

Those demands reflected a broader Saudi and UAE policy that aims to shape the greater Middle East, stretching from Central Asia to the Horn of Africa, in their mould and aims to force governments to tow a Saudi-UAE line that promotes autocracy, rejects political participation, opposes political Islam and violates human rights.

The boycotters demand that Qatar align it’s military, political, social and economic policies with those of other Gulf states, shutter its Al Jazeera television network and other Qatar-funded media outlets, end military cooperation with Turkey and close down Turkish military bases in the country.

Qatar to accept demands that would have undermined its independence and sovereignty or convince the international community of the legitimacy of their approach.

In a rebuke of the boycotters who also demanded that Qatar revoke citizenship granted to political refugees from Saudi Arabia, the United Arab Emirates, Egypt, and Bahrain; the Gulf state, on the third anniversary of the boycott, issued the region’s first asylum law. The law applies explicitly to human rights defenders; journalists, writers and researchers; political, religious and ethnic minority activists; and former or current officials opposed to their government’s policies which are threatened by persecution.

To be sure, Qatar’s positioning of itself as a defender of human rights has holes in it that make it look like Emmenthaler cheese. Domestically, press freedom is non-existent. The government abruptly in May closed the Doha Centre for Media Freedom after firing its first two directors for taking the organization’s goal literal. As free-wheeling and hard-hitting as Al Jazeera can be in its regional and international reporting, as careful it is not to cover Qatar’s warts or take reporting to wherever the chips fall when it touches on Qatari interests.

Read more: The Rise, Fall, and Rise Again of the Politics of Middle…

It took widespread criticism for Al Jazeera to suspend two journalists and pull a recent seven-minute, Arabic language video it posted to its social media channels that claimed Jews exploit the Holocaust and that Israel is the genocide’s “greatest beneficiary.” To be fair, the network said the video “contravened its editorial standards” and mandated that all staff participate in a bias and sensitivity training.

The contradiction between Qatar’s advocacy of political change everywhere but at home is rooted on the one hand in the recognition that transition is inevitable, and that Qatar is best served by being in front of the cart rather than behind it and on the other the seemingly naïve belief that the Gulf state itself can remain immune.

Al Jazeera television network and other Qatar-funded media outlets, end military cooperation with Turkey and close down Turkish military bases in the country.

And that’s what explains the crisis and the boycotting alliance’s demands. If Saudi Arabia and the UAE strive to maintain region’s autocratic status quo to the degree possible by suppressing dissent and activism and projecting military as well as soft power, Qatar’s strategy embraces degrees of change but is wholly built on soft power. 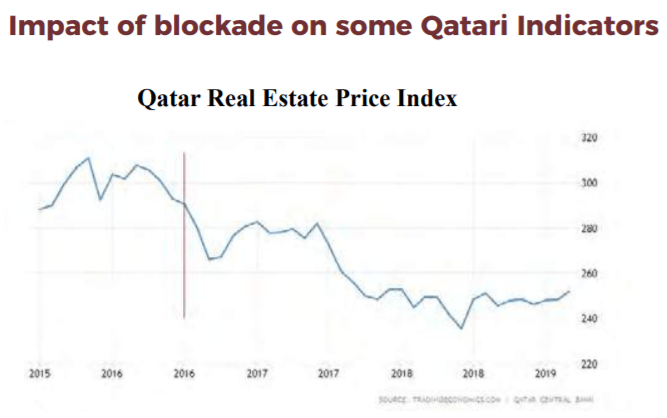 It is a strategy that is built on diversified gas sales; maintaining relations with all parties to position Qatar as a go-to-mediator; projecting the Gulf state as a global, cutting-edge sports hub; situating Qatar as a transportation hub connecting continents with a world-class airline; turning the Gulf state into a cultural hub with dazzling museums and arts acquisitions, and investing in Western blue chips and high-profile real estate.

Alongside diplomacy, economics, media, and football, gas is increasingly emerging not only as a battlefield but also as a driver of the Gulf crisis. Gas may also prove to be a gauge for the timeframe that Saudi Arabia supported by the UAE has in mind, and one reason why they have so far refused to contemplate unconditional negotiations and compromise.

Taking control of Qatari fields would have not only forced Qatar, the world’s largest liquified natural gas (LNG) exporter, to surrender effectively but also turned Saudi Arabia into the world’s second-biggest exporter overnight. If gas proves to be a significant driver of the rift, then recently announced Saudi plans to become a substantial gas player suggest that the dispute could take at least another six years, if not a decade, to resolve.

The contradiction between Qatar’s advocacy of political change everywhere but at home is rooted on the one hand in the recognition that transition is inevitable.

Amin Nasser, the chief executive of Saudi national oil company Aramco, said during the World Economic Forum in January that he expected US$150 billion to be invested in the Saudi gas sector over the next ten years. Mr. Nasser envisioned gas production increasing from 14 billion standard cubic feet to 23 billion by 2030.

Saudi energy minister Khalid al-Falih said in April following the disclosure of recently discovered significant reserves in the Red Sea that the kingdom may achieve its goal in five to six years. In the meantime, Saudi Arabia is pushing to become a major gas trader and marketer, primarily in the spot and short-term markets, by partnering with producers across the globe, including in the Russian Arctic.

The kingdom has expressed an interest in acquiring a 30 percent stake in Russia’s Novatek Arctic LNG project. Access to the project’s gas would allow Saudi Arabia to negotiate long-term deals and/or sell cargoes on the spot market or increase domestic supply. Aramco agreed in May to a buy a 25 percent stake in Sempra Energy’s Texas liquefied natural gas terminal in one of the biggest gas deals ever. 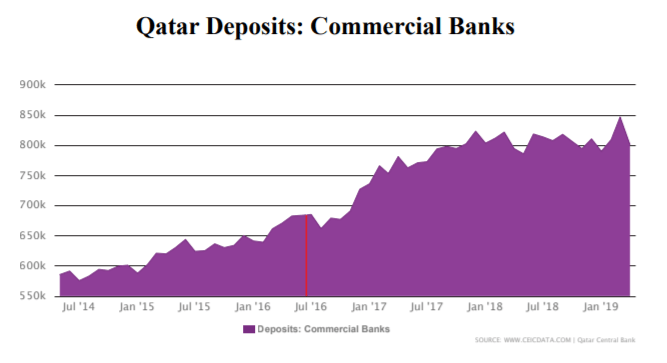 The deal involves a 20-year agreement under which Saudi Arabia would buy 5 million tons of gas annually from Sempra’s Port Arthur plant, due to begin operations in 2023. Qatar has partnered with Exxon Mobil Corp. in a $10 billion LNG plant in Texas and has plans to pour a total of US$20 billion into US oil and gas fields. The Saudi-Qatari gas rivalry is also playing out elsewhere.

An Aramco delegation visited Pakistan in April to discuss gas sales as a way of addressing the South Asian country’s energy shortage as it opens its multiple gas fields to foreign investors. Qatar responded by lowering the price of its offering in a move that appeared to give it an advantage despite the kingdom’s increasingly hefty investment in Pakistan.

Saudi Arabia before the declaration of the boycott from invading the Gulf states and seizing Qatar’s operations in the world’s largest gas field, according to The Wall Street Journal.

The prospect that Saudi Arabia and the UAE may only be willing to seek an end to the Gulf crisis once the kingdom has secured its position as a major gas exporter would mean that their boycott of Qatar would still be in place when the Gulf state hosts the World Cup in 2022. That, more than FIFA president Gianni Infantino’s unsuccessful ploy to persuade Qatar to agree to an expansion of the 2022 tournament from 32 to 48 teams, could prove to be a potential icebreaker.

Read more: Qatar scores, at least on the soccer pitch

The tournament puts Qatar’s detractors in a bind. It will be the first time that the world’s foremost mega sporting event is held in the Arab world, a soccer-crazy region and even more poignantly, in the boycotting Gulf states’ backyard. The boycott bans nationals of the boycotting states from travel to Qatar. Even if fans were to defy the boycott, they would have to go to greater expense and accept more complicated logistics because of the rupture in air and land links.

As a result, boycotting states, in a bid to cater to domestic demand and stave off potential protests, could be forced to breach their embargo and potentially create an opportunity to put an end to the blockade. For now, that may seem a long shot, and much can change in the coming three years. However, if the status quo remains unchanged, soccer could emerge as the Gulf’s best hope.

Dr. James M. Dorsey is a senior fellow at Nanyang Technological University’s S. Rajaratnam School of International Studies, an adjunct senior research fellow at the National University of Singapore’s Middle East Institute and co-director of the University of Wuerzburg’s Institute of Fan Culture.

Sherry Rehman listed among 25 most influential women of 2022