Stagflation and it’s prevalence in Pakistan

The author argues why Pakistan needs a balanced monetary and fiscal policy response to tackle the issue of stagflation and policymakers need to move away from the neoliberal influence in which they use the interest rate to control inflation.

Stagflation is a situation in which a country has a simultaneous increase in both inflation and unemployment, and in turn, falling economic growth. The term itself is a linguistic blend of the two words: stagnation and inflation. This is in contrast to the phenomenon of the Phillips Curve in the standard conventional economics literature, whereby inflation and unemployment are inversely related; when one rises, the other falls.

The term, stagflation, was coined in 1965 by Iain Macleod, who was a British politician from the Conservative Party. Later on, after the first global oil crisis of 1973 when the price of an oil barrel increased from US$2 to US$11 in few weeks this term became popular due to the underlying economic situation seen in the western world.

The oil price shock in the wake of the Middle East tensions of early 1970s, kicked in a substantial inflationary spiral, and paved way for greater independence of central banks, which in turn has led to excessive use of interest rates to control inflation. This policy soon back-fired: over-emphasis on a contractionary monetary policy in the shape of keeping high levels of interest rates over a long period of time that did not lead to a fall in inflation, but did hit investment levels and economic growth rates; in turn leading to higher unemployment levels.

Stagflation is a situation in which a country has a simultaneous increase in both inflation and unemployment, and in turn, falling economic growth.

Inflation did not respond much to rise in the policy rate because aggregate supply-side considerations were not taken into account. The required institutional reform and economic stimulus were not undertaken on the supply-side to reduce cost-push determinants such as the oil price that were stoking inflation. Also, the basket of goods and services which formed the basis on which CPI (consumer price index) inflation was calculated, was less dependent on aggregate demand factors, and more on the aggregate supply determinants.

The latter reason was more prevalent in the case of developing countries, like Pakistan, where the policy rate has little scope given the composition of the inflation-related basket of goods and services. Hence, for example, the basket in the developed world holds greater importance for inflation in terms of housing, education, and health given the significant role of mortgages/loans rates in securing those than in developing countries.

Read more: Pakistan needs to focus on its “Pilgrimage Economy”

Therefore, policy rate has more scope to affect the inflation rate than in developing countries. Having said that, when the factors leading to inflation are more on the side of aggregate supply like in the case of oil price shock then a balanced policy response is needed on both the aggregate demand and supply-side; something that has been missing in both the developing and developed countries in general, due to the prevalence of Milton Friedman ideology that inflation is mostly a ‘monetary phenomenon.’ 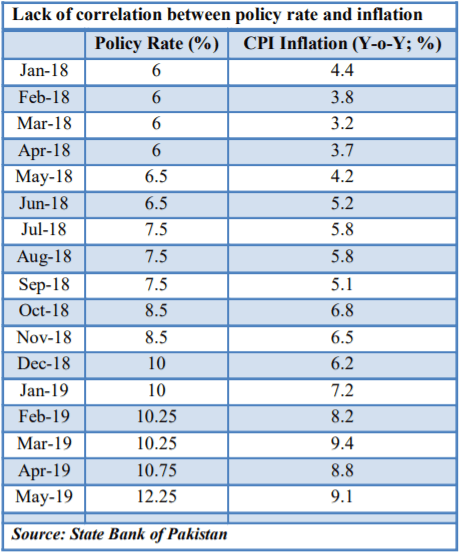 Pakistan has a long history of remaining under IMF programs, and together with the local economic policymakers who are heavily influenced in the tradition of Neoliberal economics, it has meant that the issue of inflation became one of stagflation more often than not. The table (in terms of two boxes, indicating before and after the PTI-led government took office in August 2018) and the graph below clearly indicate this: while policy rate has been kept high, inflation remained high and stubborn, economic growth has also been stagnating.

Middle East tensions of early 1970s, kicked in a substantial inflationary spiral, and paved way for greater independence of central banks, which in turn has led to excessive use of interest rates to control inflation.

The PTI-led government needs to learn fast from this situation; after all PM Imran Khan often says that the most important thing is correct analysis of the problem. Inflation in Pakistan has been a cost-push phenomenon, basically due to imports (mainly oil) and exchange rate passthrough. Curtailing inflation, therefore, requires above all policies that reform the institutional elements on the supply-side- like labour market reforms to raise productivity and bargaining power of labour, along with enhancing productivity.

Instead, and wrongly, the focus has been on the demand side, when clearly inflation is not primarily a demand-pull phenomenon in Pakistan. Average wage levels across sectors have not risen much over many years now, and especially in real terms to add to aggregate demand. In addition, public and private spending have both remained subdued; former due to high level of debt-repayments (both external and domestic) and public-sector enterprise losses, and for the latter on the back of weak institutional factors and risk-averse nature of primary markets towards the private sector.

Furthermore, the price of goods and services in the inflation basket primarily depends on governance-related factors like market failures, weak regulation, and high transaction costs, which are cost-push determinants, affecting inflation from the aggregate supply side. Hence, using the policy rate excessively for over a year now Pakistan’s central bank has been the most aggressive in using policy rate in Asia has meant that investment has been deterred and economic growth falling, leading in turn to higher unemployment; while inflation has not been curtailed much at the same time.

The PTI-led government needs to learn fast from this situation; after all PM Imran Khan often says that the most important thing is correct analysis of the problem.

And thus the perpetuation of stagflation continues. Sadly, the budget that was recently announced, and the IMF program yet to formally start though have not internalized this thought process, and still primarily continue with relying on talking about market-based exchange rates and monetary policy as main ways to control inflation. This policy has not worked well in successfully dealing with stagflation.

There has been volatility in oil prices since January 2019, where the US-China tariff-related trade wars are becoming a significant reason in keeping global economic growth prospects subdued, and the rising Middle East tensions especially the attacks on oil tankers in a significant global oil supply route of Strait of Hormuz are respectively stoking volatility. Hopefully, the current rise in oil prices will not be a precursor for another oil shock of the nature of 1970s, and that better sense will prevail in the handling of US-Iran related Mideast tensions.

Both factors are particularly important for Pakistan, that is a significant net-oil importer, and has a weak local currency against the US dollar, especially at a time when it has a large current account deficit. This means that the import-related oil prices and exchange rate pass-through is very strong for inflation. Yet, policymakers have not learnt from earlier mistakes of overuse of policy rate for controlling inflation in the wake of the global oil crisis of 1970s.

This policy inclination – both local and one suggested in IMF programs towards over-relying on policy rate on curtailing aggregate demand, is indeed a disproportionate response to correctly and effectively addressing inflation and low growth challenge. Pakistan, therefore, needs a balanced monetary and fiscal policy response to tackle the issues of stagflation. The policy should focus on both the aggregate – demand and supply sides. This will also help bring a much-needed boost in the employment levels.

It would make sense, at the same time, to borrow from the unconventional economic policy of the type of modern monetary theory, and political-economic and heterodox institutional and behavioral economics. Overall as well, global prevalence of stagflation requires a policy response on similar lines as indicated above. Monetary policy alone, or when given a disproportionate role in tackling stagflationary concerns, will not work as has been indicated the time and again over the last four decades or so.

Dr. Omer Javed is an institutional political economist, who previously worked at International Monetary Fund, and holds PhD in Economics from the University of Barcelona. He tweets @omerjaved7. The views expressed in this article are author’s own and do not necessarily reflect the editorial policy of Global Village Space.