Economic analyst and businessman argues that the job of the government has just started. If imposing a lockdown in a country like Pakistan was difficult, kickstarting the economy in comparison will be a nightmare. However, with growing protectionism and falling oil prices, this is an opportunity in disguise which Pakistan must fully embrace. The government and the private sector must cooperate to ensure that the country is back on track.

These days there is this pointless war of words going around in the political arena and also to some extent in the civil society. A segment of some pseudo-socialist writers/opinion-makers accuse the government of not enforcing the lockdown the way it should have been done and for allowing key businesses to operate, just because it wants to support the country’s elite and businessmen so that they can keep on making their profits at the expense of human life. Unbelievable, as nothing could be more absurd or more stupid.

Ironically, these critics not only themselves belong to the so-called ‘Elite’ class they pick on, but also represent the publications that primarily cater to this elite! And as for the substance of the criticism itself, one can only say that they either do not properly understand the very underlying dynamics of corporate functions or are simply indulging in some inopportune point-scoring at perhaps the most difficult time in our nation’s young history.

Thereby, signifying that the country thankfully is still alive and kicking – certainly not profiteering (as is being implied) of any kind. More like a national service by giving something back to the economy through perhaps a symbolic gesture of economic activity that ensures ‘hope’ does not fade away! However, having said this, the job for the government is far from being done; it is just beginning.

Inflation, for now, is well under control and headed in the right direction. Clocked at 8.50% in April 2020, with global commodities crashing and a compressed domestic demand, one will not be surprised to see it reduced to around 6.50-7% by June 2020

So what should the government do? Well, interestingly the answer is not too hard, as it requires a simple two-pronged approach: a) Give the private sector a free hand along with a level playing field and let the entrepreneurial juices do the rest and b) From the government’s self-management perspective, preserve cash.

Explaining the latter first: the government should endeavour to balance the upcoming budget by relying on its internal resources. With COVID-19 have also come some opportunities for the likes of Pakistan type economies (historically, heavily dependent on imports) in the shape of low oil prices and a growing wave of protectionism, which has forced the WTO to let its guard down, even if temporarily.

Meaning, an ideal time to look inwards. And it is in this context that one was relieved to see this government not passing on the entire benefit from the fall in oil prices to the consumers.

As per its latest announcement on the petroleum product prices, the reduction on average amounted to an of average 26%, or PKR 22/litter on average from the previous level, which is about 70% of what its determining body OGRA had suggested, and similarly, the CNG prices were reduced by about 15%, which again was a partial passing of the benefit going by the applicable correlation contract formula to Brent.

A summary being: Petrol by Rs 15 or 16%, reduced to Rs 81.85, but more important the break-down revealing that despite the reduction, government’s coffers, in essence, became richer since taxation in effect increased by 14% and OMC margins up by 6%. The reduction given to the consumers however, is still quite generous when compared to our regional neighbours like India, Sri Lanka, Bangladesh and Myanmar.

The writer has always maintained that needlessly reducing fuel prices for direct consumers is like squandering the advantage up in smoke, as people just burn it away in non-productive social habits. India, across the border, and even some oil-producing countries like Malaysia and the UK, have always been far more prudent in this regard, by earning revenues that can be put to better use or towards larger good.

Inflation, for now, is well under control and headed in the right direction. Clocked at 8.50% in April 2020, with global commodities crashing and a compressed domestic demand, one will not be surprised to see it reduced to around 6.50-7% by June 2020. Just the 26% decline on average in petroleum products should have an estimated direct impact of around 2.6% decline in the CPI inflation in the coming quarter, which is good, both for the masses and the economy at large.

This takes us to the other single most important measure of further reducing interest rates by June 2020, possibly to 6-7%. This alone will give the national exchequer a revenue injection of around Rs 1,500 billion. Combine this by any savings that the government can manage by giving a long-awaited hair cut to its size and the outlook for Budget 2020-21 already starts to look quite promising!

On the second part, the unavoidable downside of such lockdowns is that purely owing to the nature of governance required during pandemics the footstep of governmental oversight invariably grow significantly and unless quickly curtailed back to previous levels, can tend to become counterproductive and prove to be the main obstacle in regaining economic momentum.

Especially, in countries like ours where the bureaucracy is mostly compromised or largely incompetent or just outrightly corrupt, the fallouts can be quite grave. Already, horrendous stories are floating around of extortion and mishandling of businesses, factories and markets, all in the name of oversight. Again, as proposed so many times, the unlocking compliance needs to be handled professionally through third-party evaluations by independent international and national bodies like Moody’s, SGS, Bureau VERITAS, PSA, Chambers, etc.

“Ethics is not a mystic fantasy, nor a social convention, nor a dispensable subjective luxury. Ethics is an objective necessity of man’s survival, not by the grave of oversight, nor due to your competitors nor of your whims, but by the grace of reality and the nature of life.” ~ Ayn Rand.

By now it is a given that the COVID-19, by comparison, is going to have a far more devastating effect on the developing economies (like ours) leaving them even more resource strained than before. So, the key for us is in finding out of the box solutions for providing the much-needed stimulus: Measures that do not require dole-outs in the shape of capital from the government (as it is low on cash in any case) but instead are more to do with policymaking. 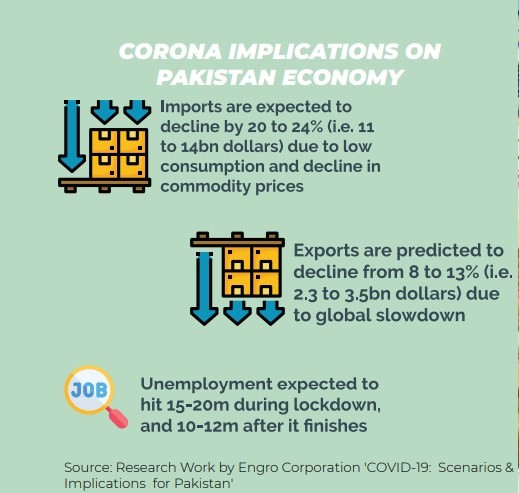 The obvious policy measure that immediately comes to mind is the coercively high prevalent Sales tax rate, which is crippling the markets by stifling business transaction and needs to be quickly rationalized. Again, a cursory look around us and for some odd reason we find that Pakistan’s sales tax (or value-added tax) rate is amongst the highest not just regionally, but also globally.

If from 17% (even higher in certain cases) is brought down to around 5% and side by side if zero-rating is restored on the five main sectors of exports, the government in all probability will end up collecting more revenues than what it is getting now.

No rocket science in deciphering that as business transactions grow and the incentive for off-books settlement erodes, the overall inflows increase. As per a recent survey of entrepreneurs by McKinsey, optimism for post-corona economic revival was almost found to be double in countries where taxation was low or recently reduced versus where taxation remained exorbitantly high.

“ Incentivizing by going back to basics: Capitalism through Market Forces – the Unknown Ideal.” ~ Ayn Rand.

Dr. Kamal Monnoo is a political economist. He is an honorary Consul-General of the Czech Republic in Punjab, and a member Board of Governors of Islamabad Policy Research Institute. (IPRI) He is an author of two books ‘A Study of WTO’, and ‘Economic Management in Pakistan.’ He can be reached at: kamal. monnoo@gmail.com.