GVS: Who was an inspiration for you during your childhood?

Maryam Mujtaba: When I was in eighth grade in Roots School System, I was very much into extra-curricular activities. I was a favourite of the school principal; she was an inspiration for me; a lovely woman, Mrs. Riffat Mushtaq. She kept on motivating us saying, “There is nothing in the world that you cannot do.”

She was always grooming us for bigger and better things. My mother was also a great inspiration and motivator in my life. My mom taught me how to cook and pushed me to do my homework on time. 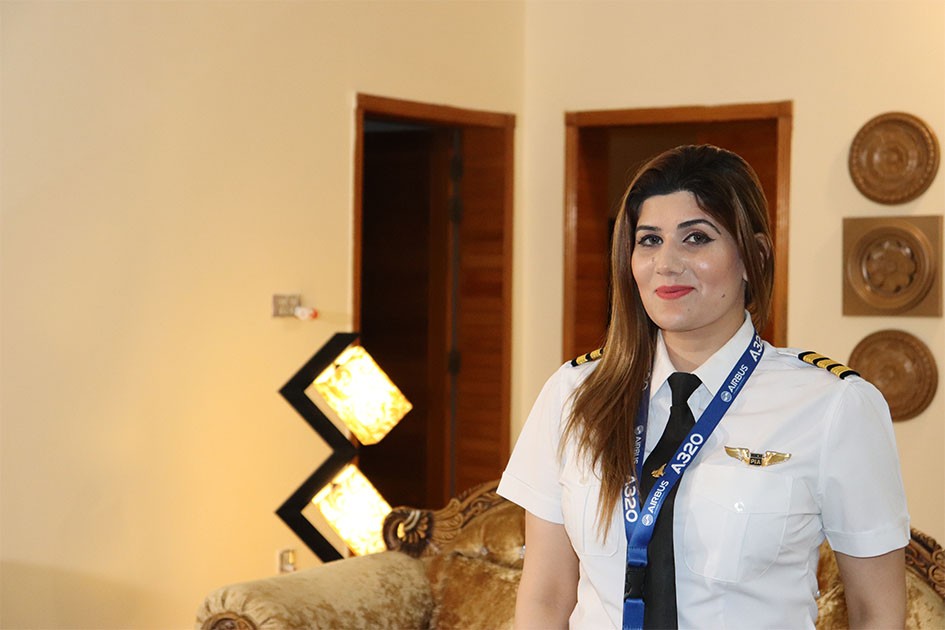 I used to think of it as child labour then! Later on I realized just how much she helped me in my grooming, today there is nothing that I cannot do. She not only taught me household chores but also encouraged me in my studies as well as my extra-curricular activities.

As a child I was passionate about painting; I used to make a lot of glass paintings. I also loved bike and car racing. I used to play with a jeep toy, while my sisters played with their dolls even though we were all together. They are wonderful sisters, but our hobbies and interests were different.

GVS:  When was the first time you ever thought of becoming a pilot?

Maryam Mujtaba: Since childhood, I wanted to become a pilot. My father worked in PIA and I and my younger brother used to play with toy planes and we used to wonder how a plane would fly. Then we came to know that ‘pilots’ were trained to fly planes.

When I was a teenager, I met Captain Ayesha Rabia, who was the first female Captain at Pakistan International Airlines (PIA), and that was when I realized I could also become a pilot too.

GVS:  Is it easy to manage a household with the odd hours your job has?

Maryam Mujtaba: It is not easy but I manage it, because my parents and my husband are very supportive. They have stood by me, but my parents especially get most of the credit for helping me out. When I am not around, they are the ones who look after my kids, since my husband also works outside the city.

GVS:  I heard you got most of your education after your marriage?

Maryam Mujtaba: Yes, not exactly education but yes, I learned flying after my marriage, and then I joined PIA back in 2011.

GVS:  Have you ever felt scared while flying a plane, knowing all passengers are your responsibility?

Maryam Mujtaba: No, I have never felt scared, not even in the first flight. In fact, I was so excited and desperate to take-off. That was an awesome feeling. But I have never gotten scared in my entire career. The take-off is my favourite part of the flight. No matter where I am flying, I just love it. 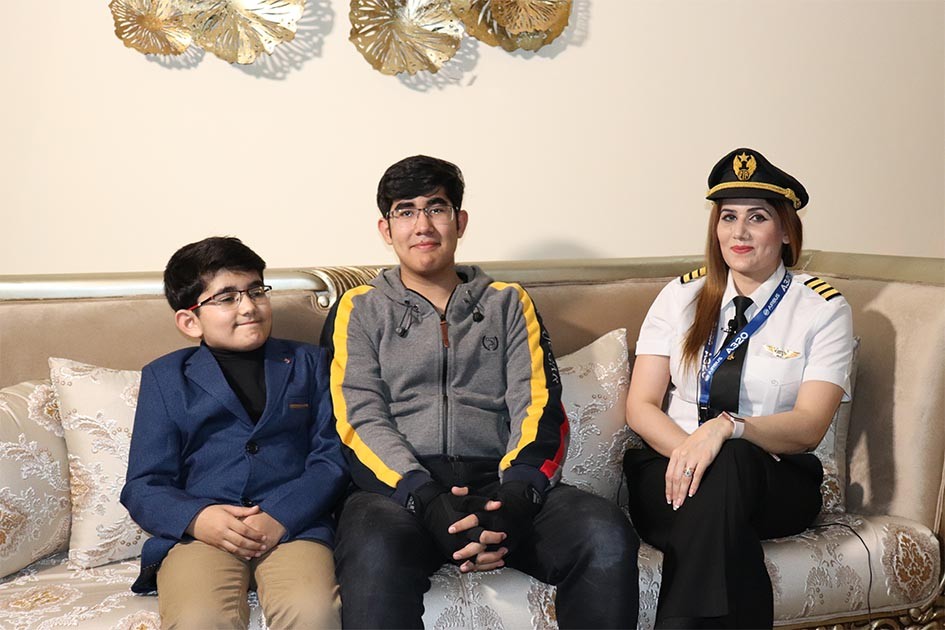 All pilots are trained thoroughly and it is a tough training course –  it is irrelevant whether you are a female or male. Once you are done with your simulator, exams, root checks and pass all your flying tests, they make sure that you can fly independently. So, no, with that training, I have never felt scared at all.

GVS: How supportive are your male colleagues?

Maryam Mujtaba: My colleagues are very supportive; it’s a very welcoming environment and they are very encouraging. In PIA there is no gender discrimination. Once you’re in uniform, in the cockpit you are never be treated, as if there is a lady sitting next to a captain. They just take it as a ‘pilot’ sitting next to them.

GVS:  What is the number of female pilots in PIA?

Maryam Mujtaba: We have approximately 10 female pilots in PIA. In the aviation industry, there is still very few pilots. But girls these days are very well aware and are trying to get into this industry.

GVS:  Can you share with us any interesting story that happened on a flight?

Maryam Mujtaba: Once during a domestic flight, a female passenger, when she came to know that a woman was flying the plane, got very scared and complained out loud. I personally consoled her, talked to her and she calmed down. So much so, we actually became friends. I still often talk to her.

GVS: Where have you been to so far? Any specific place where you would want to go?

Maryam Mujtaba: I have been to almost all the destinations where PIA flies. I have flown both international and domestic flights. Since I am a flyer, it does not matter where I am going and where I am not going, what really matters is the runaway where I am going to land. So in terms of my love for flying, there would not be any specific that I would want to go.

GVS:  Maybe not as a pilot, but as Maryam Mujtaba, is there any place you would want to go to?

Maryam Mujtaba: As Maryam Mujtaba, I would want to go back to the USA. I was travelling as a passenger once when I was still a cadet pilot for PIA. At the airport counter, they asked me what I did and what was the purpose for me going back to Pakistan.

So, I said I had joined an airline, I am a training to be a commercial pilot. They were all so excited; I just want to go back and show them that I have made it!

GVS: How do foreigners see you being a pilot as Pakistan is generally perceived as a very hostile country?

GVS: How long have you lived in Kashmir?

Maryam Mujtaba: I have lived in Kashmir for a long time in a village called Panjgran in Muzaffarabad It’s a beautiful picturesque village.

GVS: Is it hard for Kashmiri girls to get an education?

Maryam Mujtaba: No. It’s not hard for the girls at all. The literacy rate in Kashmir is very high. All the girls are very educated, they are very keen learners. They are fond of learning things and want to educate themselves.

Previously it was very conservative, but women always had rights and were getting educated. My own mother-in-law is running a school in Kashmir and happened to be the youngest headmistress in her time. She was also one of the first to open a private school in AJK. 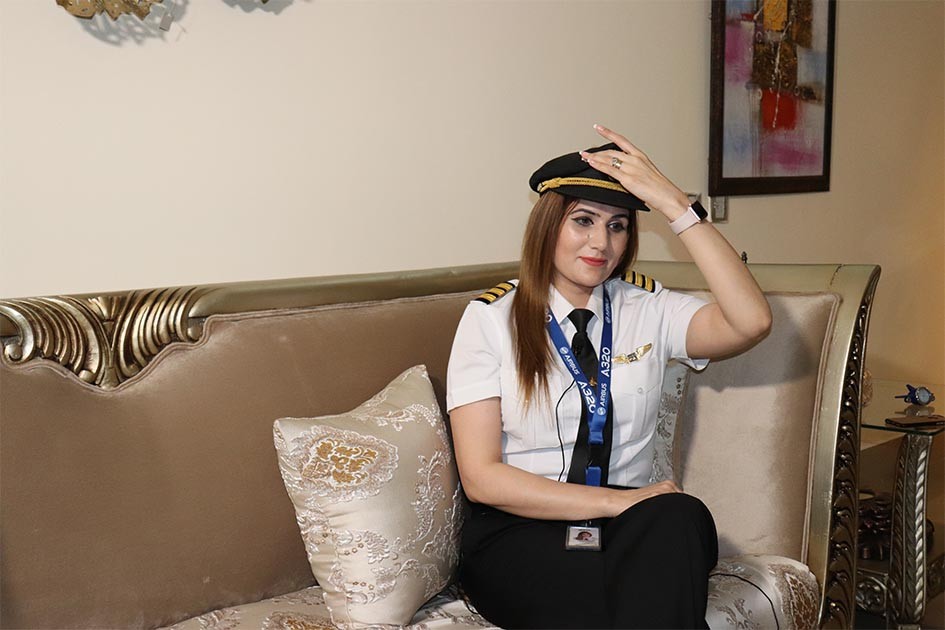 GVS: Any advice for other women wanting to be pilots?

Maryam Mujtaba: They should believe in themselves, stay focused, educate themselves and if they want to achieve, they should not surrender. I have met a few girls who were trying to learn flying but left in-between their course. Not just the girls, but boys too. They just give up, while learning how to fly after a few hours they just leave. It is tough occupation.

GVS: What are your future plans? Are they particularly related to this field of yours?

Maryam Mujtaba: In my national flight career, I really want to become a captain on a 777; it is the biggest aircraft in the PIA fleet.

Read more: GVS exclusive interview with Imran Khan; his vision and his priorities 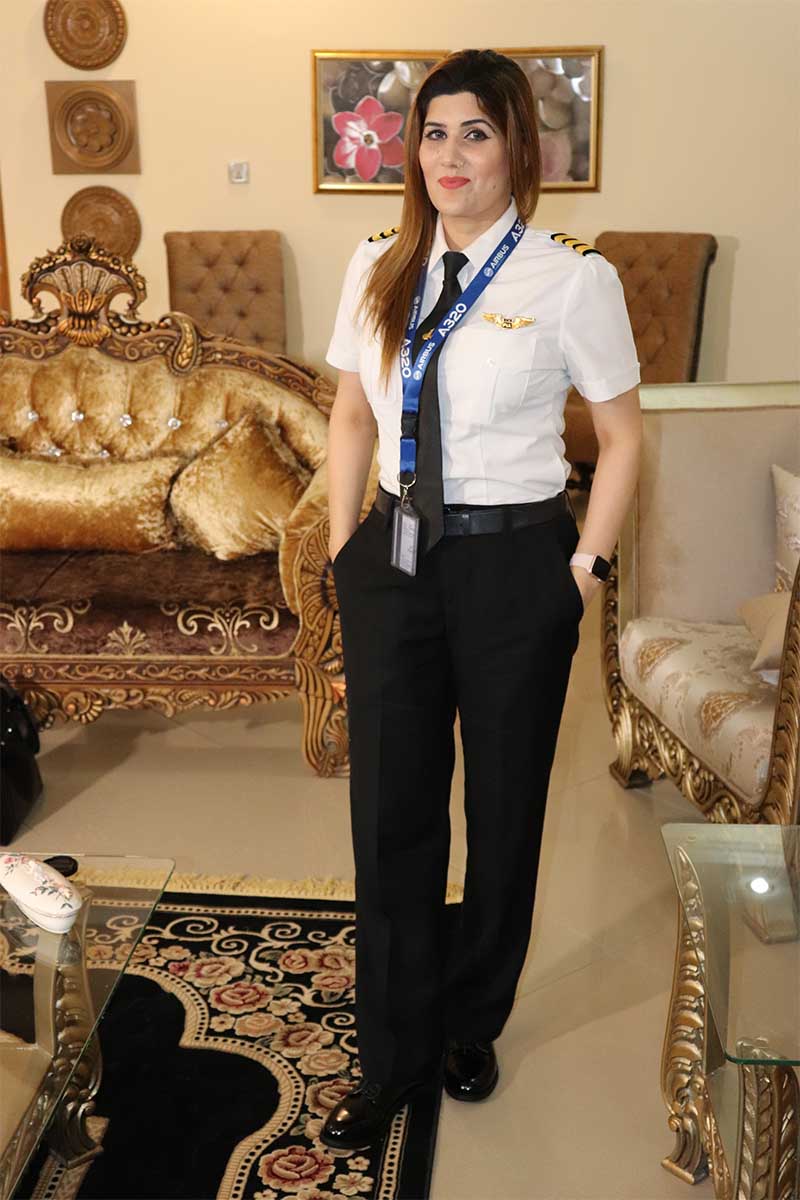 GVS: How have you seen PIA progressing in the past couple of years, as an organization?

Maryam Mujtaba: It is doing pretty good. When I am flying, I usually see people coming over and praising PIA. It’s an amazing institute and everyone is part of a family.  I am very touchy about what people say about my airline.

One time I came across somebody who tried to take a dig at PIA, and I said you have no idea, it is a wonderful airline and I can say that because I work there. It has a great atmosphere; everyone from the ground crew to the flying crew are very cooperative and professional. PIA’s services have significantly improved with time.

Our entire cabin crew is wonderful in their dealings with passengers. I was once travelling with my mother as a passenger; it was a great experience for me, even though they did not know that I am a PIA employee. They were all very nice to me and took great care of my elderly mother as they do with everybody else.

Magazine Desk - October 15, 2020
H.E Ambassador Yao Jing was China's 17th Ambassador to Pakistan (2017-2020). During his tenure, CPEC strengthened and consolidated and moved into PhaseII. His ceaseless...

How Punjab is gearing up for CPEC Phase-II, Mian Aslam Iqbal explains

Where does Pakistan stand on Netflix chart?