In Pakistan, the penetration of the insurance industry has been historically low. Official data from the World Bank shows it to be less than 1% and this threshold has never been broken in the past 25 years. It has one of the lowest penetration percentages in the region. The Insurance penetration of a country represents the premium volume collected by the companies as a percentage of GDP.

Historically this has been a reflection on the poor business environment in the country, stringent government regulations not encouraging the insurance industry, a large rural population and low income and literacy rates which means that people don’t understand the importance of insurance or cannot afford it.

The Insurance penetration of a country represents the premium volume collected by the companies as a percentage of GDP.

The future is looking good though

Pakistan has large young demographics which provides encouraging prospects for the industry. The insurance sector (life and non-life) has seen impressive growth in the past five years. Improvements in economic activity and law and order, as well as the industry’s increasing use of non-conventional distribution channels such as through banks or social media, have helped to increase the insurance sector’s presence. 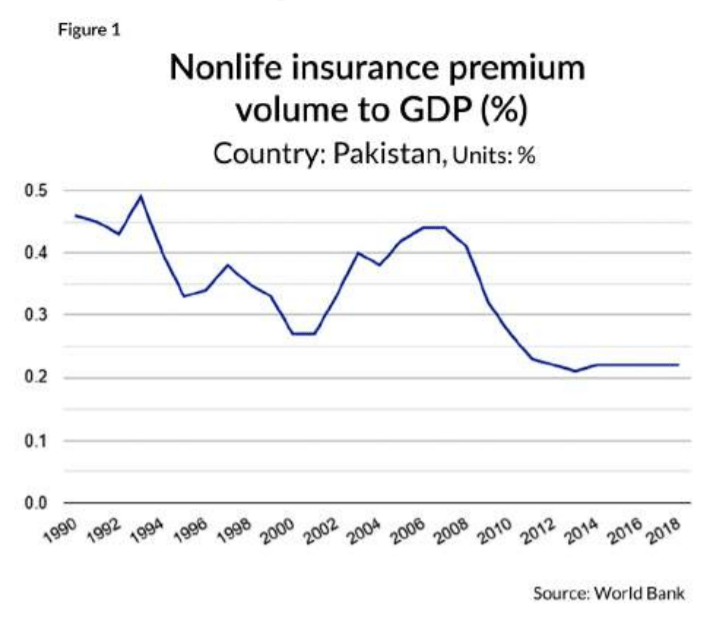 Furthermore, government regulations such as allowing conventional insurers to transact window Takaful business has helped to improve profit opportunities for insurance companies. The use of government instruments by insurance companies should see increased investment income as Pakistan looks as if it is in a cycle of rising interest rates and finally positive insurance needs around health insurance and CPEC related infrastructure development should continue as projects are still underway and phase 2 is starting which will involve transportation and manufacturing.

According to Munich Re the global insurance sector is set to grow in 2019 and most of the growth is to happen in emerging Asia. According to Swiss Re in 2017, real premium growth in Pakistanis grew at 13 percent versus 2.9 percent in Advanced economies and 6 percent in other emerging economies. Improvements in technology and expanding communications have also encouraged the industry to become more operationally efficient. 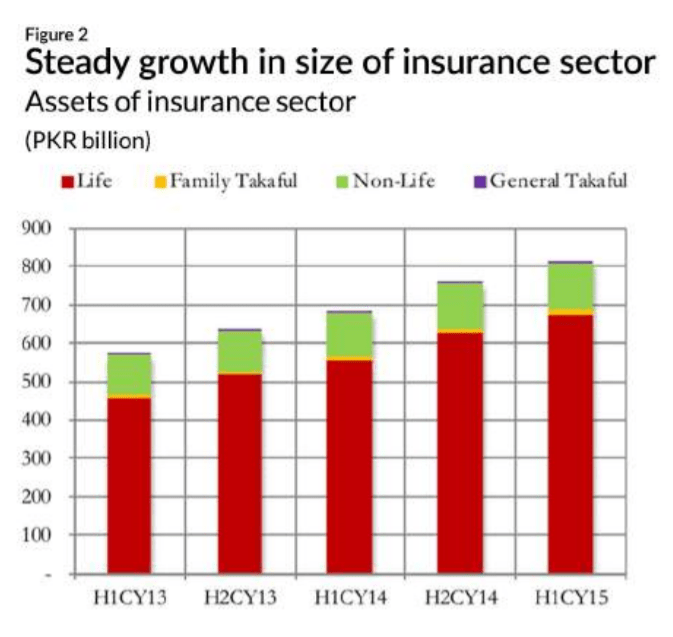 Insurance is the second-largest sector in the financial industry and constitutes 5.3 percent of Pakistan’s total financial sector assets. According to SBP Financial Stability Review 2017, the Insurance sector’s asset base and gross premiums have registered an increase of 12 percent during 2017. The assets of the non-life insurance sector increased by 4.8 percent to PKR 179.6 billion in 2017. Overall the sector has a positive float, which allows money to be used for further investing activities, which has been increasing over recent years boding well for the industry. 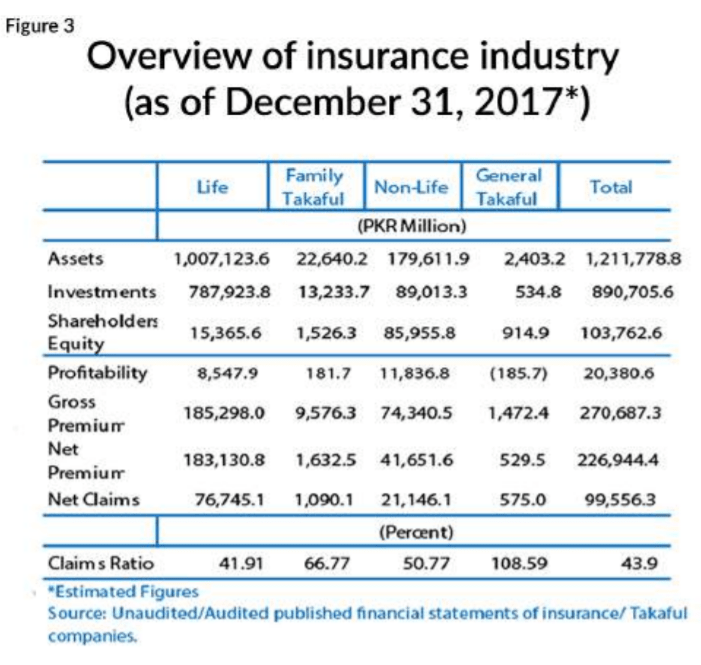 The performance of the whole region is below par. Figure 4 shows historical data from 1990 to 2014. Out of the six countries i.e. India, Pakistan, China, Sri Lanka, Bangladesh and Iran, the penetration levels of only two are close to 2% of GDP: Iran and China. According to the Indian Brand Equity Foundation (IBEF), the non-life insurance industry in India is set to touch the $24 billion benchmark.

The insurance sector (life and non-life) has seen impressive growth in the past five years.

Whereas the Insurance Association of Pakistan posted premium income levels of the life insurance industry, at only $543.2 million in 2017. High numbers of our eastern neighbour can be accredited to the better literacy levels and significant developments in the business environment. In a 2016 Swiss Re report, Pakistan came 85th in the world on the list of the most penetrated countries by the insurance sector. 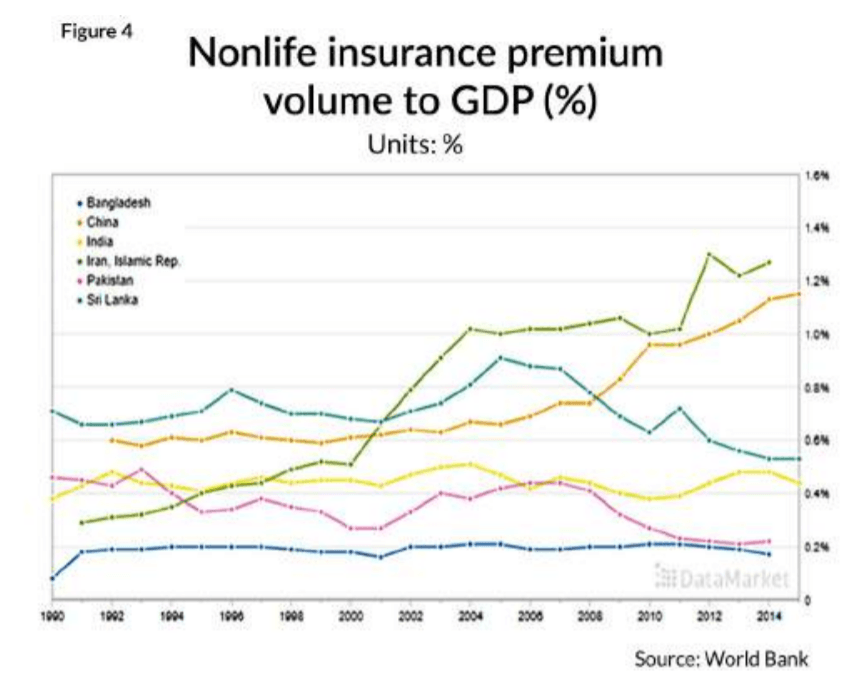 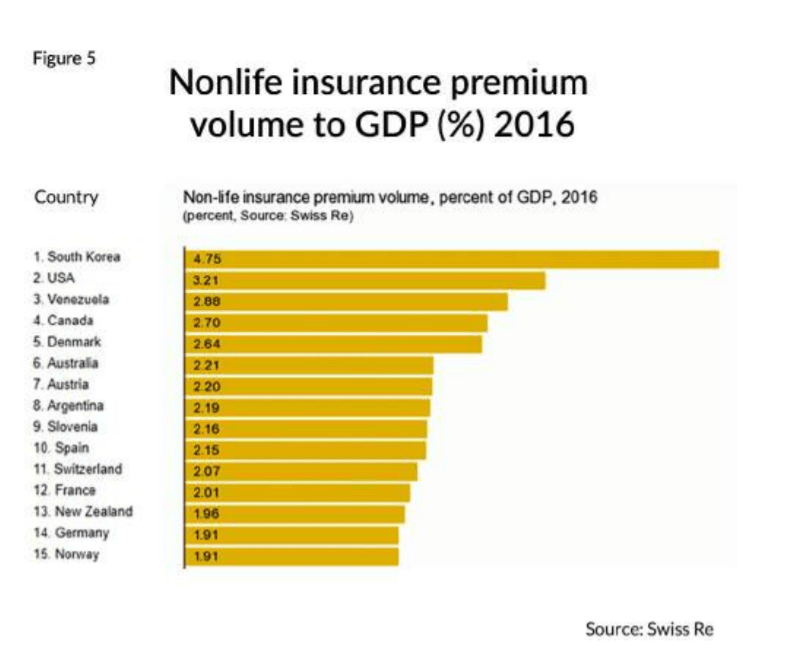 South Korea and USA topped the list with penetration levels of 4.75% and 3.21% respectively. Other countries in the region such as China, India and Bangladesh also had unsatisfactory performances as they were well below on the list too.

Fire and property, motor, health and marine and aviation have traditionally remained the major products of the general insurance industry. The motor vehicle sub-sector remained the highest contributor towards premium accumulation with a share of 44 percent of net premiums in 2017, according to SBP. The health sector has shown a growth of 27% in the past year, taking its share to 17% of all net premiums. We expect to see this growth continuing given the importance of health insurance schemes the current government is launching.

In a 2016 Swiss Re report, Pakistan came 85th in the world on the list of the most penetrated countries by the insurance sector.

Insurers have attempted to launch new products such as crop, livestock, travel and other retail products in their portfolio but profitable diversification due to lack of uptake remains a challenge for most general insurance firms. The last Punjab PML-N government launched a project pilot in Punjab insuring farmers against bad crop yields, the project helped farmers to understand the potential advantages of crop insurance. 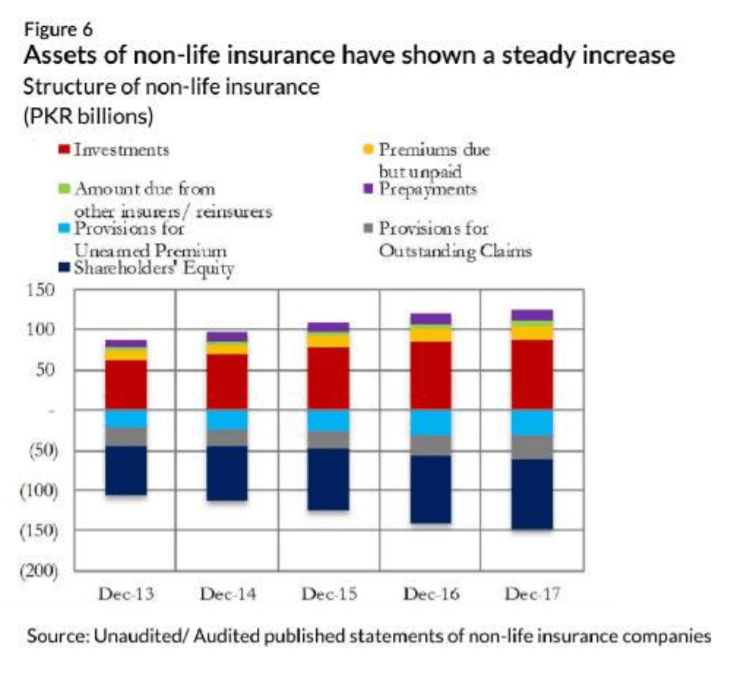 ISI ensures the stream of income sent from migrant workers to their home countries in case they meet with an accident or fall sick. FRI directs a portion of the stream of remittance money into health insurance to help protect the livelihood of the families of the migrant workers. FRI product gives migrant workers who prefer that their remittances be used for investment rather than consumption, the opportunity to invest directly in their families’ well-being. 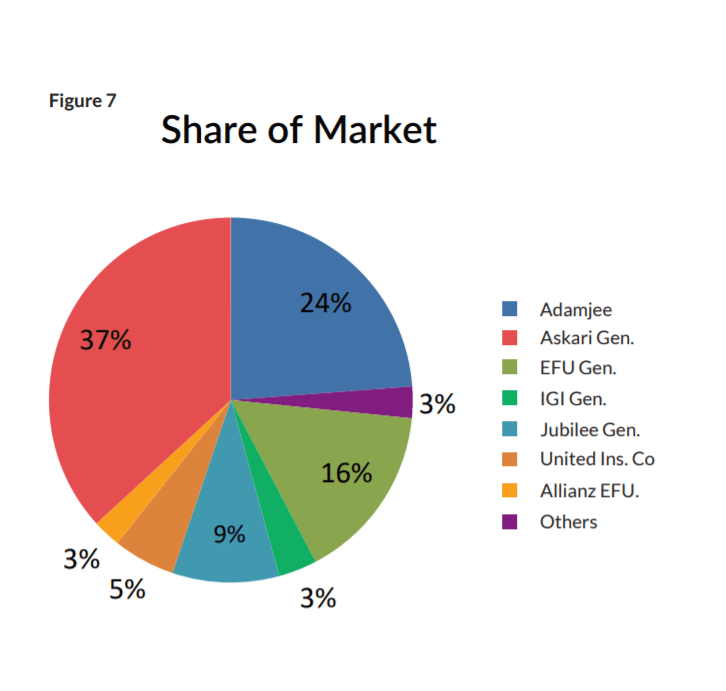 The Pakistan insurance market is relatively liberalized, with 100% foreign ownership and control of insurance companies permitted. It is subject to the current minimum capital requirements of PKR 500 million (USD 4.3 million) for non-life insurers. According to the Insurance Association of Pakistan (2018), at present there are 30 non-life insurance companies operating in Pakistan, including three general takaful operators and one state-owned insurer.

ISI ensures the stream of income sent from migrant workers to their home countries in case they meet with an accident or fall sick.

Some of the major companies are Adamjee, EFU, United Insurance, Jubilee Insurance and TPL Direct Insurance. At present, nine non-life companies and two life companies have foreign investments, operating either as wholly-owned or as joint ventures with a local partner. Adamjee is the largest player in the industry and has close to 30 percent share of the general insurance market.

Adamjee Insurance Company Limited (AICL) was incorporated as a Public Limited Company on September 28, 1960 and is listed on Pakistan Stock Exchange Limited. AICL has a unique advantage of having a regional presence in the United Arab Emirates (UAE). AICL in collaboration with Hollard International, a South African company, has life assurance operations under a separate entity namely, Adamjee Life Assurance Company Limited.

Ever since EFU’s establishment in 1932, it has been through challenges of changing times, not least the partition of 1947. It has built a diversified customer base, covers more diverse types of risks than any other companies. It provides fire, engineering, marine, aviation, motor, miscellaneous services, and takaful covers. EFU was the first-ever insurance company to insure a bridge at ‘Natives Jetty’ (also known as KPT Flyover) constructed by the Chinese. Similarly, EFU was involved in facilitating and providing various types of risk covers for the Quaid e Azam solar power plant project during the construction phase.

Jubilee Life Insurance was incorporated in Pakistan on June 29, 1995. The company is engaged in life and non-life insurance, carrying on a non-participating business. It has units including Individual life unit, conventional business, accident and health, overseas group life and health business as well as window Takaful operations.

TPL is a subsidiary of Green Oaks Global Holdings Limited. TPL company has been evolving since its inception in 1992. TPL is known for being one of the best car Insurance companies in Pakistan as it utilizes the tracker network and TPL offers a separate mobile app-GPS locator map of Pakistan for individual and corporates in tracking vehicles.

The neglected humans of society

The meteoric fall of the Myanmar military junta

Naseem Shah admitted to hospital ahead of 5th T20I against England

Pakistan and the incoming Sovereign Default

Naseem Shah admitted to hospital ahead of 5th T20I against England

Hareem Shah to donate winnings from casino for flood relief

Pakistan knocks out England in 4th T20I with Rauf’s pace