While the world around us is being jolted and shaped by one event after the other – pandemic, America's George Floyd Moment and Indo-China tensions - Pakistanis are finally waking up to the ugly reality of corona pandemic. Irrespective of government rhetoric – Pakistanis are now totally relying upon their good chances through "Herd Immunity" and Darwin's "survival of the fittest". A younger population and absence of geriatric communities may still save Pakistan from a bigger calamity - but PTI government's thinking ability and capacity issues are fully exposed.

While the world around us is being jolted and shaped by one event after the other – pandemic, America’s George Floyd Moment and Indo-China tensions – Pakistanis are finally waking up to the ugly reality of corona pandemic. Irrespective of government rhetoric – Pakistanis are now totally relying upon their good chances through “Herd Immunity” and Darwin’s “survival of the fittest”. A younger population and absence of geriatric communities may still save Pakistan from a bigger calamity – but PTI government’s thinking ability and capacity issues are fully exposed.

We were about to go to press when WHO’s critical letter was received by the Government of Pakistan like a bombshell. Even before that, it was getting increasingly obvious that Pakistan’s federal and provincial governments have not been able to grasp the nature of the challenge thrown by the Corona pandemic.

Results speak for themselves. In the first week of June, Pakistani cases are fast rising along with the death toll. But according to the World Health Organization (WHO), Pakistan is now No. 10 in the speed of rising cases and appears totally unprepared to tackle the building crisis. Diagnosed cases are now above 100,000, and more than 2000 have died.

This looks small as compared to the United States, UK and Italy – however, the difference is that those countries started to open up after the curve of infection and death was coming down. Whereas, Pakistan suddenly opened up while the curve was still moving upwards. The daily death toll is now between 80-100 people. When the National Command and Coordination Centre (NCOC) briefed media before Eid, a death toll of 37 in a day was considered dangerous. Media were briefed that the death toll of 20-25 is manageable for country’s health system – and if cases shot up requiring ventilators, then the system will be choked. In the first week of June, media reports indicate that even in Rawalpindi and Islamabad government and private hospitals are unable to admit corona patients – for they cannot manage this load. 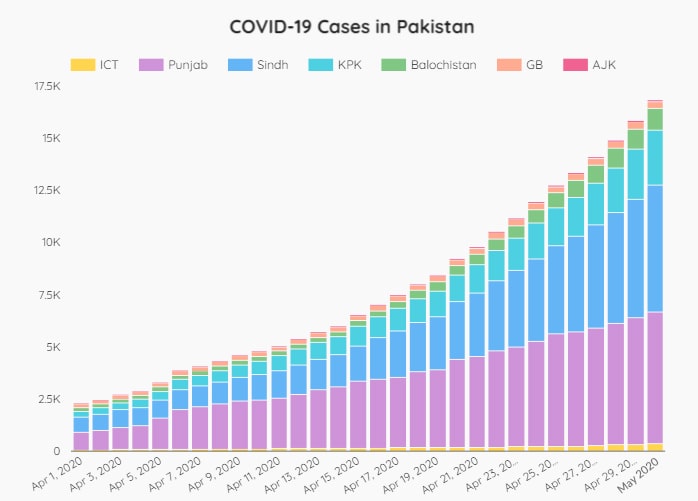 Global Health body, an organ of the United Nations, has recommended that Pakistan should do intermittent “Lockdowns” to reduce the transmission of the virus. But given the political and economic dynamics in Pakistan, this looks very unlikely at this stage. WHO has pointed out that country has only around 750 working ventilators while the disease has now reached every district across a nation-state of 200 million-plus. WHO’s assessment is confirmed by media reports pouring in from across Pakistan. Ever since Eid ul Fitr, people had set aside whatever precautions they were observing earlier, and streets and markets were full of people without any regard for the concept of “social distancing”.

So, what went wrong? Hindsight is always 20/20; it appears that no one in Pakistan – except the doctors and infectious diseases experts – was able to understand the challenge. The federal government, Sindh and opposition kept fighting a traditional political battle. Prime Minister somehow made up his mind from the very beginning that ultimately it is only “Herd Immunity” that will work. Since he is not a student of science, it is believed that his firm position was a result of the briefing by some experts close to him who strongly believed that there is no solution but: Herd Immunity. Result had been utter chaos.

PM, Imran Khan, kept on taking position after position, against lockdowns. Opposition kept on shouting “lockdown”. It was a black and white debate with opposing binaries without a scientific understanding of the challenge. So, when under the pressure of the medical community, opposition and media lockdowns happened, these were more a political compromise from Islamabad rather than a well-understood concept. While small educated communities in Islamabad, DHA’s, Cantonment areas and Bahria Towns kept observing what can be called the essence of lockdown – most country simply did not believe in it.

Many Pakistanis – sometimes even on Twitter, kept challenging the truth of corona pandemic. They argued that reports of massive deaths in New York are fake news, and the whole thing is a western conspiracy. These ridiculous commentaries were symptomatic of the widespread disbelief about the pandemic. The reason was that Pakistan’s large rural population had remained free from the disease. Chinese had been meticulous in preventing the spread to Pakistan through travel restrictions, Pakistan’s international traffic was negligible, and the preponderance of young population (almost 65% under 35) kept the symptomatic disease under control.

All these factors contributed to a false sense of immunity in the government decision-makers. PM remained focused on what he repeatedly described as 25 million daily wage earners. However, looking back, this was a “communication disaster” because following Prime minister’s pronouncements against lockdowns, all his cabinet and party members kept downplaying the nature of the threat. While PM never said that pandemic is not a threat, his continual emphasis on “poverty and lives” misled a population that already lacked proper education, quality information and personal resources.

The real damage, however, happened when the government abruptly lifted the lockdown before the Eid -instead of acting prudently and taking this big decision in cautious baby steps. The pressure was probably coming from the business community that saw Eid as a great economic opportunity to jump-start a shut economy. However, the way it was done – including some very unwise interventions by superior courts – lead the common man to believe that now it’s all over.

Given low effective education across large parts of the country, the possibility of “Social Distancing” and other SOPs being observed was always questionable. With the opening of the public transport system and a festive mood around Eid when countless thousands thronged city spots virus has now reached all districts and small towns across Pakistan -as pointed out by WHO. However, given the toxic nature of politics and state of the economy, it is highly unlikely that the government will be able to go for another lockdown. This effectively means that Pakistanis – irrespective of government rhetoric – are now totally relying upon their good chances through “Herd Immunity” and Darwin’s “survival of the fittest.” A younger population and absence of geriatric communities may still save Pakistan from a bigger calamity – but PTI government’s thinking ability and capacity issues are fully exposed.

Our June issue tries to make sense of the cataclysmic regional and international developments that are bound to shape a new world order around us. Dr Omer Javaid’s piece examines the economic outfall of corona pandemic. After being ravaged by the pandemic, United States was jolted by its old fault line of “Black vs White” when George Floyd, an Afro-American died with his neck under the knee of a white policeman. The result has been a pandemic of unending rioting across the United States that found expression across Europe and led to the dismantling of 19th-century statues of slave traders including King Leopold of Belgium, even a Christopher Columbus statue was beheaded in Boston. Kamran Adil, a senior officer with Police Service of Pakistan, examines the issues of policing in the context of riots across the United States. 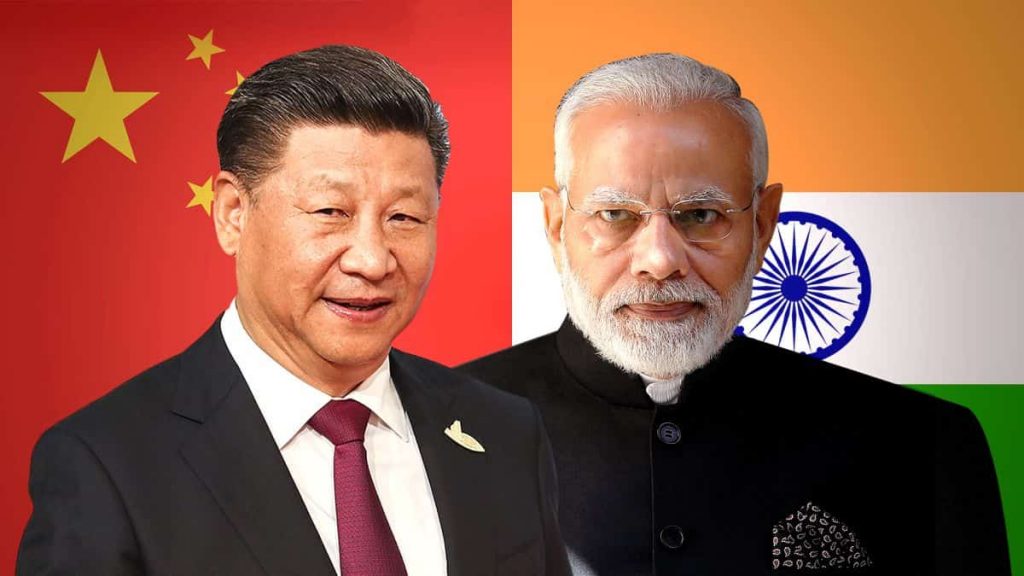 India and China again face to face, now in Ladakh; Najma Minhas, Managing Editor Global Village Space examines how Indian strategy of courting both superpowers – ascending China and the declining United States – is not working and how China is forcing India to reflect on its options. Extending our focus on India-China tensions, June issue brings an exclusive discussion with Mr Pravin Sawhney, Editor Force Magazine, Delhi. Sawhney, an ex-Indian army officer, is author of his recent book, “Dragon at the doorsteps” and is one of the most informed and prominent experts on the nature of disputes between India and China. Sawhney argues that India has not been able to understand Chinese intentions and capacities – and is in deep trouble.

President AJK, Sardar Masood Khan, who has also served as Pakistan’s Ambassador in Beijing and United Nations, brings – in another exclusive discussion with GVS – a very different and provocative dimension to India-China tensions. He also argues that while Kashmiris are encouraged by Chinese actions in Ladakh but the human situation in Indian occupied Kashmir is getting from bad to worse. Broadening our lens on Azad Kashmir, Justice Manzoor Gilani, an ex-senior judge of Azad Kashmir Supreme Court laments that judiciary in Azad Kashmir deserves to be treated with the same respect, by Islamabad, as it is given across Pakistan. This is a provocative piece and may upset many in the capital city, but the issues raised by Justice Gilani deserve serious reflections.

In May, the federal government finally decided to privatize Pakistan Steel Mills, and we examine the making of this national disaster in its historical context. Finally, our film critics take stock of the popularity of Turkish drama serials – like Dirilus Ertugrul– in Pakistan and the challenge it throws for Pakistani arts.