These days we rush from one media story to another, trying to keep up with the latest terrorist attack. Yesterday Paris; today London; tomorrow, who knows? These attacks are tragic enough when they are acts of violence by religious extremists who have outsmarted our police and intelligence agencies. But, of course, many of them are actually violent acts facilitated by our police and intelligence agencies, directly or indirectly.

The tragedy in such cases lies not only in the immediate human suffering but in the way our civil society and elected representatives are betrayed, intimidated, disciplined and stripped of their power by our own security agencies. The War on Terror, which goes by different names in different countries but continues as a global framework for violent conflict, thrives on this fraud. 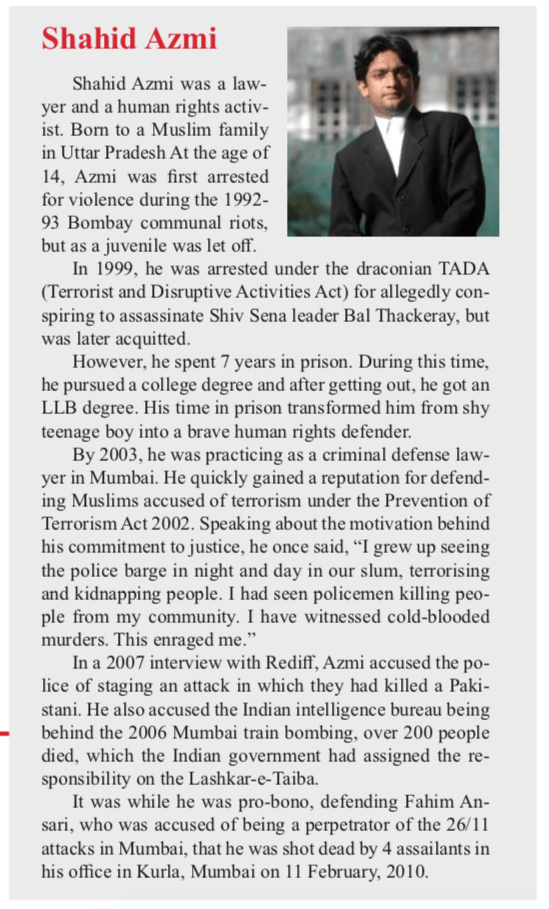 But if the very agencies that should be investigating and preventing these attacks are involved in perpetrating them, what is civil society to do to protect itself? Who will step in to study the evidence and sort out what really happened? And who will investigate the official investigators? Over the years, civilians from different walks of life have stepped forward–forming groups, sharing information and methods, creating a tradition of civilian investigation.

One such investigator is Elias Davidsson. Some readers will be familiar with his meticulous book, Hijacking America’s Mind on 9/11 or his more recent work, Psychologische Kriegsführung und gesellschaftliche Leugnung. Davidsson has now produced a book on the 2008 attacks that occurred in Mumbai, India. The book is entitled, The Betrayal of India: Revisiting the 26/11 Evidence (New Delhi: Pharos, 2017).

Incompetence is a fact of life, but there are times when the incompetence theory is strained to the breaking point and it is more rational to posit deliberate deception. In the case of the Mumbai investigation, Davidsson depicts its failures as going well beyond incompetence.

To remind ourselves of these attacks–that is, of the official story of these attacks as narrated by the Indian government–we can do no better than to consult Wikipedia, which seldom strays from government intelligence narratives:

“The 2008 Mumbai attacks were a series of attacks that took place in November 2008, when 10 members of Lashkar-e-Taiba, an Islamic militant organization based in Pakistan, carried out a series of 12 coordinated shooting and bombing attacks lasting four days across Mumbai. The attacks, which drew widespread global condemnation, began on Wednesday, 26 November and lasted until Saturday, 29 November 2008, killing 164 people and wounding at least 308.”

This description, however faulty, serves to make clear why the events were widely portrayed as a huge crime—India’s 9/11. When we bear in mind that both India and Pakistan are armed with nuclear weapons, and when we consider that these events were widely characterized in India as an act of war supported by Pakistan (Davidsson, 72-74; 511 ff.; 731 ff.), we will understand how dangerous the event was for over a billion and a half people in south Asia.

We will also understand how easy it was, on the basis of such a narrative, to get a bonanza of funds and equipment for the Mumbai police (735-736) and why it was possible, given the framing of the event as an act of war, for India’s armed forces to get an immediate 21% hike in military spending with promises of continuing increases in subsequent years (739 ff.).

This distinction is useful for civil society investigators. We will frequently find it easier to prove that an investigation is deceptive, and that it is obscuring rather than illuminating the path to the perpetrators, than to directly prove the event itself to have been fraudulent.

Wikipedia’s paragraph tells a straightforward story, but the straightforwardness is the result of much snipping and smoothing. Both Pakistan and Lashkar-e-Taiba denied responsibility for the attacks (65; 513) and, Davidsson argues, they did so for good reason.

In his Conclusions at the end of the book Davidsson encourages us to assess separately the actual attacks and the Indian state’s investigation of the attacks (865 ff.) It is “highly plausible,” he says, “that major institutional actors in India, the United States and possibly Israel, were complicit in conceiving, planning, directing and executing the attacks of 26/11” (873); but the evidence of a deceptive investigation is even stronger:

“The first definite conclusion of this book is that India’s major institutions, including the Central government, parliament, bureaucracy, armed forces, Mumbai police, intelligence services, judiciary and media, have deliberately suppressed the truth regarding 26/11 and continue to do so. I could discover no hint of a desire among the aforementioned parties to establish the truth on these deadly events (865).” 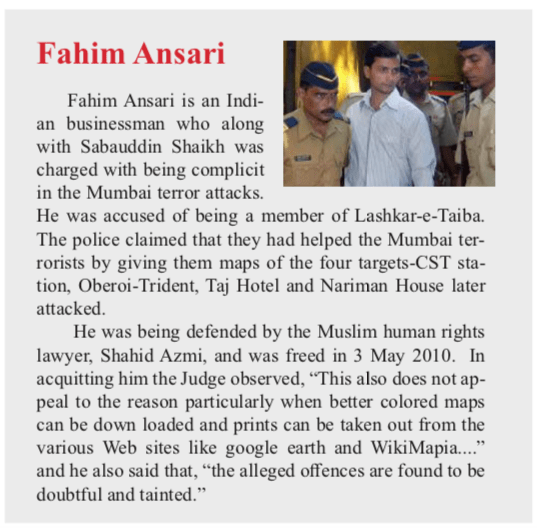 This distinction is useful for civil society investigators. We will frequently find it easier to prove that an investigation is deceptive and that it is obscuring rather than illuminating the path to the perpetrators than to directly prove the event itself to have been fraudulent. And there are two good reasons to pay attention to evidence of a cover-up. First, to cover up a crime is itself a crime.

Second, those covering up a crime implicate themselves in the original crime. If they were not directly involved in the commission of the crime, they are at least accessories after the fact. To begin by exposing the fraudulent investigation, therefore, will often be wise. When this has been done we shall often find that we can begin to discern the path to the attack itself.

Davidsson gives a wealth of evidence about both the attacks and the investigation, but for this brief review I shall focus on the investigation. Here are three recurring themes in his study that may serve to illustrate the strength of the cover-up thesis.

When officials claim to know the identity of a perpetrator (individual or group) prior to any serious investigation, this suggests that a false narrative is being initiated and that strenuous effort will soon be made to implant it in the mind of a population.

Thus, for example, Lee Harvey Oswald was identified by officials of the executive branch as the killer of President John F. Kennedy–and as a lone wolf with no associates–on the afternoon of the assassination day, long before an investigation and even before he had been charged with the crime. 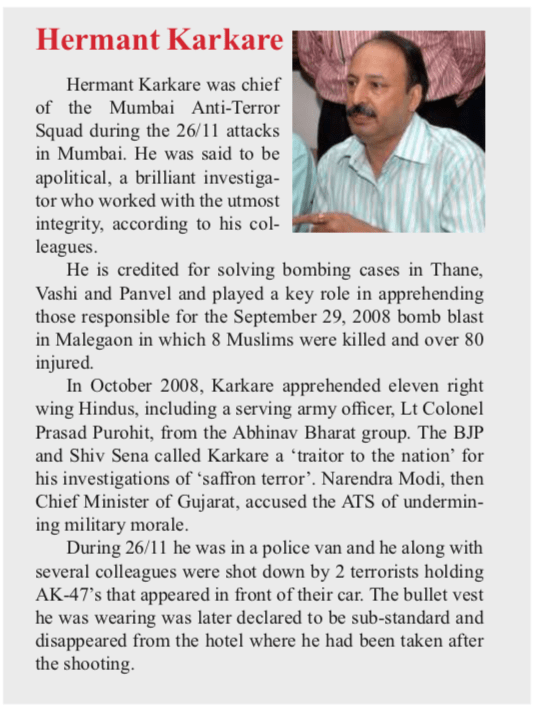 And we had major news media pointing with confidence, by the end of the day of September 11, 2001, to Osama bin Laden and his group–in the absence of evidence.

In the Mumbai case the Prime Minister of India implied, while the attack was still in progress, that the perpetrators were from a terrorist group supported by, or at least tolerated by, Pakistan (65; 228; 478; 512; 731).

Likewise, immediately after the attacks Henry Kissinger attempted to implicate Pakistan. Three days prior to the attack on the Taj Mahal Palace Hotel in Mumbai, one of the main attack sites, Kissinger had been staying in the hotel. He “sat with top executives from Goldman Sachs and India’s Tata group in the Taj to ‘chat about American politics’” (331).

As Davidsson shows, what investigation there was came much later, and even today the case against Pakistan remains full of contradictions, unsupported allegations, and absurdities.

Read more: No respite in US aggression against Pakistan

Incompetence is a fact of life, but there are times when the incompetence theory is strained to the breaking point and it is more rational to posit deliberate deception. In the case of the Mumbai investigation, Davidsson depicts its failures as going well beyond incompetence.

(3) Extreme secrecy and the withholding of basic information from the population, with the excuse of “national security”

It is difficult to see how the investigation described above differs from what we would expect to see in a police state. Evidently, the “world’s largest democracy” is in trouble.

Meanwhile, motives for the “highly plausible” false flag attack, Davidsson notes, are not difficult to find. The attacks not only filled the coffers of national security agencies, creating as they did the impression of a permanent threat to India, but also helped tilt India toward those countries claiming to take the lead in the War on Terror (809 ff.; 847). The FBI showed great interest in the attacks from the outset.

It actually had a man on the scene during the attacks and sent an entire team directly after the event (812 ff.). The Bureau was, remarkably, given direct access to the arrested suspect and to his recorded confession (before he even had a lawyer), as well as to eyewitnesses (651-652; 815). The New York Police Department also sent a team after the conclusion of the event (816-817), as did Scotland Yard and Israeli police (651; 851).

There seems to have been something of a national security fest in relation to Mumbai as ideas of closer cooperation in matters of security were discussed (e.g., 822). In case Israel seems too small to belong with the other players in this national security fest, Davidsson reminds us that India is Israel’s largest customer in defense sales (853).

So, what can we learn from Davidsson’s book? For patient readers, a great deal: this 900-page study is as free of filler and rhetoric as it is rich in detail. (In correspondence the author told me that he was determined to produce a work dense with primary source material so that it could be of maximum help to activists in India striving for an official inquiry.)

For readers with less patience, Davidsson has provided regular summaries. And both sets of readers will find that the book discusses not only details of the Mumbai attacks, but patterns of deception common in the War on Terror.

For all these reason, this book is a highly significant achievement and is of objective importance to anyone interested in the War and Terror–the structure and motifs of its ongoing fictions and the methods through which civil society researchers can lay bare these fictions.

Dr. Graeme MacQueen is the former Director of the Centre for Peace Studies at McMaster University in Canada. He was an organizer of the Toronto Hearings on 9/11, is a member of the Consensus 9/11 Panel, and is a former co-editor of the Journal of 9/11 Studies. This article was first published in the online journal Global Research: Centre for Research on Globalization (globalresearch.ca).

The views expressed in this article are authors own and do not necessarily reflect the editorial policy of Global Village Space.

Nabeel Qadeer - 24 April 2021
Author and life coach explores PTI's evolving journey to power and its successes and failures in government so far. He argues that if PTI is to be voted in again, it will depend upon the tangible opportunities created for the masses.

Why Regionally Competitive Energy tariffs are needed for textile sector!

How Engineers, Designers and Architects fought the pandemic

The Pendulum swings on Pakistan relations with India

Islamabad Security Dialogue: Reaching out to the World

Balochistan: The Decade Ahead

Lawyer’s Movement: How it transformed Pakistani politics and society