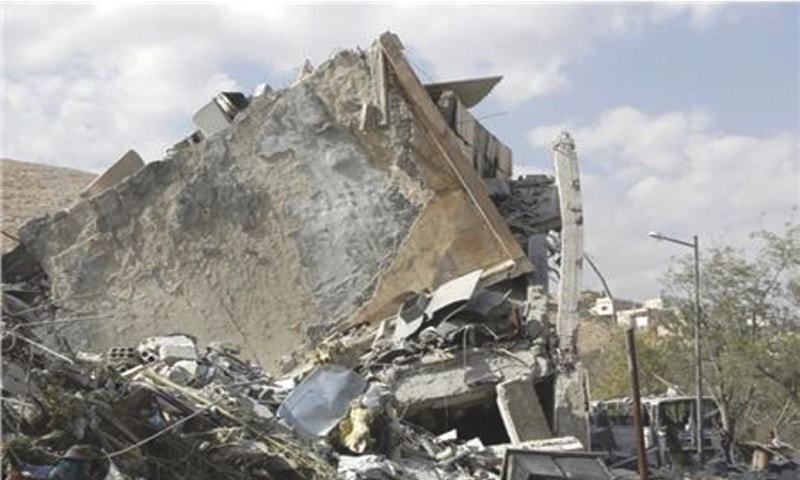 The Syrian quagmire is attracting the attention of many players in the game. The conflict has further exacerbated crises in the volatile Middle East. Amid uncertainty over the future, Beijing and Damascus are already discussing the post war scenario, one that will see them come closer.

The China-Arab Exchange Association and the Syrian Embassy organized a Syria Day Expo stuffed with hundreds of Chinese specialists in infrastructure investment. It was a sort of mini-gathering of the Asia Infrastructure Investment Bank (AIIB), billed as “The First Project Matchmaking Fair for Syria Reconstruction”. This will be followed up by Syria Reconstruction Expo; the 59th Damascus International Fair next month, where around 30 Arab and foreign nations will be represented; and the China-Arab States Expo in Yinchuan, Ningxia Hui province, in September.

“China is intending to invest $2 billion in the creation of an industrial park in Syria that will initially bring together 150 Chinese companies,” Qin Yong, the deputy chairman of the China-Arab Exchange Association, announced Sunday during the first Syria reconstruction projects fair in Beijing.

China has healthy military and economic relations with Syria. Along with Russia, it has vetoed three resolutions on choking the Assad Regime. China’s support for the Syrian government is owed to two factors other than economics. It fears that extremism can sprawl into China with the Uyghur extremists getting a new place to train. China also fears that the rebels if successful can stir up agitation inside China.

As the ISIS are losing their grip in the country, China may be politically and economically more willing to take on a lead role in post war Syria.

China officially got involved in Syria last year by appointing its special representative for the country. Furthermore, Beijing combines its diplomatic efforts with the provision of humanitarian aid to the Syrians.

As the ISIS is losing their grip in the country, China may be politically and economically more willing to take on a lead role in post war Syria. The Syrian Ambassador to China Imad Moustapha had earlier stated that  China, Russia, and Iran will have priority over anyone else for all infrastructure investment and reconstruction projects when the war is over.

It is important to remember that before the war China had already invested tens of billions of US dollars in Syria’s oil and gas industry. Naturally, the priority for Damascus, once the war is over, will be the massive reconstruction of widely destroyed infrastructure. China could be part of that via the AIIB.

China’s One-Belt-One Board (OBOR) is set to perch the country as a gargantuan trading and economic power. In order to advance the initiative, it has launched a massive campaign to make the China Pakistan Economic Corridor(CPEC) a real success.  The massive amount of foreign currency reserves (more than $3 trillion) held by China seems enough to cover the expenses needed for post-Syrian war reconstruction.

China will open up another theater with the US by working non-stop for the Iran-Iraq-Syria triumvirate to become a key hub in OBOR.

Moscow-based geopolitical analyst, Andrew Korybko delved on the importance of Syria in China’s OBOR initiative.In an article last year he argued: “China identifies Syria as a promising future logistics node in bringing together the Afro-Eurasian pivot of West Asia.Damascus was in the process of rolling out its “Five Sea Strategy”, which planned to make Syria the central point in coordinating trade between the Black Sea, Caspian Sea, Persian Gulf, Red Sea, and the Mediterranean Sea. This strategy perfectly overlaps with China’s OBOR, ergo Beijing’s latest interests in getting involved in Syrian affairs, though for the moment, limited just to UNSC political coordination with Russia and rhetorical-symbolic support. It can be forecasted, however, that China’s overseas construction companies will try to reach valuable deals with Syria in the future, ironically turning the country’s destruction into an OBOR-Five Sea Strategy ‘opportunity’ for reshaping the whole Middle East.”

The Qatar crisis has brought Iran closer to the tiny Gulf country.It could dissuade Doha from talking about regime change in Damascus. Post-war Syria will be up for grabs as world powers will vie for control and influence. China will open up another theater with the US by working non-stop for the Iran-Iraq-Syria triumvirate to become a key hub in OBOR.

News Desk - 24 July 2021
Khadija Siddiqui’s attacker Shah Hussain has been released from Jail just after 3 years of his imprisonment on basis of his ‘good behavior’. Mahira Khan and Usman Khalid Butt send their regards to Khadija.

‘Repercussions’ of the US bid to isolate Iran!

Pakistan has suffered the most in the war against terrorism: PM Abbasi