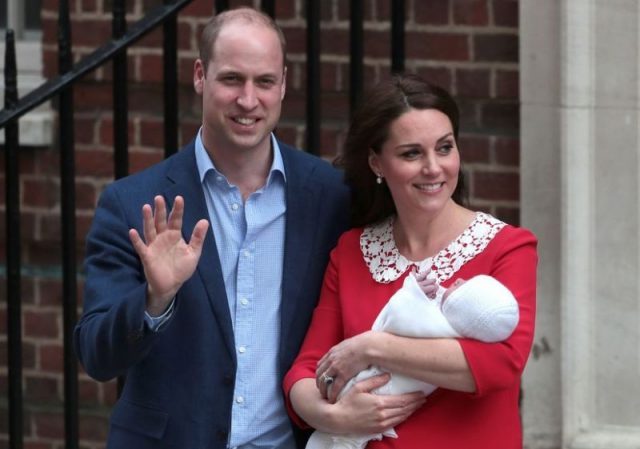 The royal couple, Prince William and his wife Kate Middleton delivered their third baby on Monday morning at St. Mary’s Hospital in Central London. The baby is third to the couple after Prince George and Princess Charlotte. The newly born is third in line to British Monarchy after his father Prince William stands second in line to Prince Charles.

Kate channeled her late mother-in-law while debuting her second son to the world in a red dress with a white Peter Pan collar (shop a similar style here). Nearly 34 years ago, when Princess Diana presented Prince Harry to the public, she also wore a red outfit featuring a white Peter Pan collar.
Kate’s dress, a red number from Jenny Packham (who designed all three of her post-birth ensembles!) is undoubtedly a tribute to the new baby’s paternal grandmother, who, of course, died in a car accident in 1997.

Duchess of Cambridge, Kate Middleton was pictured gazing adoringly to his newly born son as she appeared outside the hospital with her husband.

Kate Middleton was taken to the hospital at 6.00 am in the morning where she gave birth to the baby boy after five hours.

Read more: What it’s really like to be a woman in Hollywood

William joked that he didn’t keep the world waiting for too long after she went into labor at around 6 am before giving birth five hours later.

He said of the name of the new baby, who is now fifth in line to the throne: ‘You’ll find out soon!’ He also joked that he and Kate would have ‘Thrice worry now!’

Barack and I are thrilled to congratulate The Duke and Duchess of Cambridge on their newest arrival! We hope to meet him soon for a Kensington Palace pajama party. I’ll wear my robe!

The siblings of the newly born prince, Prince George, and Princess Charlotte reached the hospital after school. Prince Charlotte entered the hospital holding the hand of her father while waving to the assembled public and international media, who were gathered outside to catch the glimpse of the royal couple with their second prince.

Prime Minister Theresa May led the messages of support saying, “My warmest congratulations to the Duke and Duchess of Cambridge on the birth of their baby boy. “I wish them great happiness for the future.”

Greta Thunberg favorite for Peace Prize, but not everyone wants her to win