All signs indicate an evolving understanding between Pakistan and the IMF on a new program, and the recent change of guards at the Ministry of Finance should not affect at this point the pace of implementation. The likely timing for an agreement at the staff level would be just before the announcement of the next budget in late May or early June, and if all conditions are met, the first tranche could be released after the passage of the Finance Act toward end-June.

Expected shape of the new program

The program will take the current year as its benchmark and project a three-year path of economic stabilization and growth for Pakistan. They will set performance criteria comprising of at least four critical economic variables. First, the fiscal deficit, this is a policy variable that the government can determine through managing its revenues and expenditures.

Lawfare can be of various types ranging from financial/economic to cyber/media or a combination of two or more of these. Increasingly, lawfare has been used to neutralize the adversary’s capacity to pursue its geostrategic objectives and to choke its ambitions otherwise.

It may also be accompanied by an indicative target on tax collections, given the severe deterioration of tax performance that has occurred during the year. Second, financing the deficit would be an area of concern for the Fund to reduce inflationary pressures. This would involve the government severely curtailing its borrowings from the SBP. Third, domestic credit expansion would be another variable that affects aggregate demand and hence limiting its flow would be a performance indicator.

Finally, building foreign exchange reserves is a measure of how well the program is helping stem the continuing hemorrhaging of reserves. The program would require authorities to actively engage in the foreign exchange market with a view to building reserves – through purchases from the inter-bank market – unlike the preferred mode of supporting the market by selling precious reserves.

Read more: Why Pakistan will go to the IMF again, and again and…

The other component of the program would comprise implementing structural policies in energy pricing, privatization, public sector enterprises (PSEs) reforms, banking and finance, and central bank autonomy, especially in exchange rate determination. These policies would underpin the program to contain aggregate demand. Growth, inflation, interest rates, and the exchange rate would be the key variables whose trajectory would determine how successful is the program.

Where does Pakistan currently Stand

To understand the demands of the program, we have to make certain assumptions on the baseline economy at the end of this current fiscal year. Currently, after nine months into the fiscal year (2018-19), the key variables show; that the balance of payments has improved significantly by nearly 30% during Jul-Mar, yet remains elevated compared to the economy’s capacity to support it.

Around the February 2019 plenary, voices could be heard in Pakistani policy circles about Indian interference in the FATF process to diplomatically isolate Pakistan. A co-chair of the APG is a serving bureaucrat of India.

Consequently, reserves and exchange rate continue to face pressure. Further compression in import demand would be a vital target of the program, which would, in turn, pose its own challenges for revenue collection. The most formidable challenge for the government is the fiscal deficit, due to low tax collections and rising expenditures. The nine-month revenue collection has already seen a shortfall of Rs.318 billion; this is unprecedented in the recent past. At this rate, it may cross Rs.400 billion (shortfall of more than 1% of GDP).

Furthermore, depressed economic conditions have seen non-tax revenues at only 25% of its annual target in the first half of the year, further weakening the overall revenue collected. On the expenditure side, things are equally precarious primarily because of debt servicing and defense. It was in this backdrop that Asad Umar former finance minister announced that the deficit would reach Rs.2900 billion at the end of the fiscal year, a staggering 7.6pc.

The first condition of the Fund program would be to cut the budget deficit to no more than 5pc of GDP in the first year of the program. This is a tall order and requires Pakistan to make a fiscal adjustment of 2.6pc, which, at next year’s projected GDP of Rs. 42.5 trillion, would translate to Rs.1105 billion. At least half of this amount would have to come from revenue effort, particularly from tax measures. 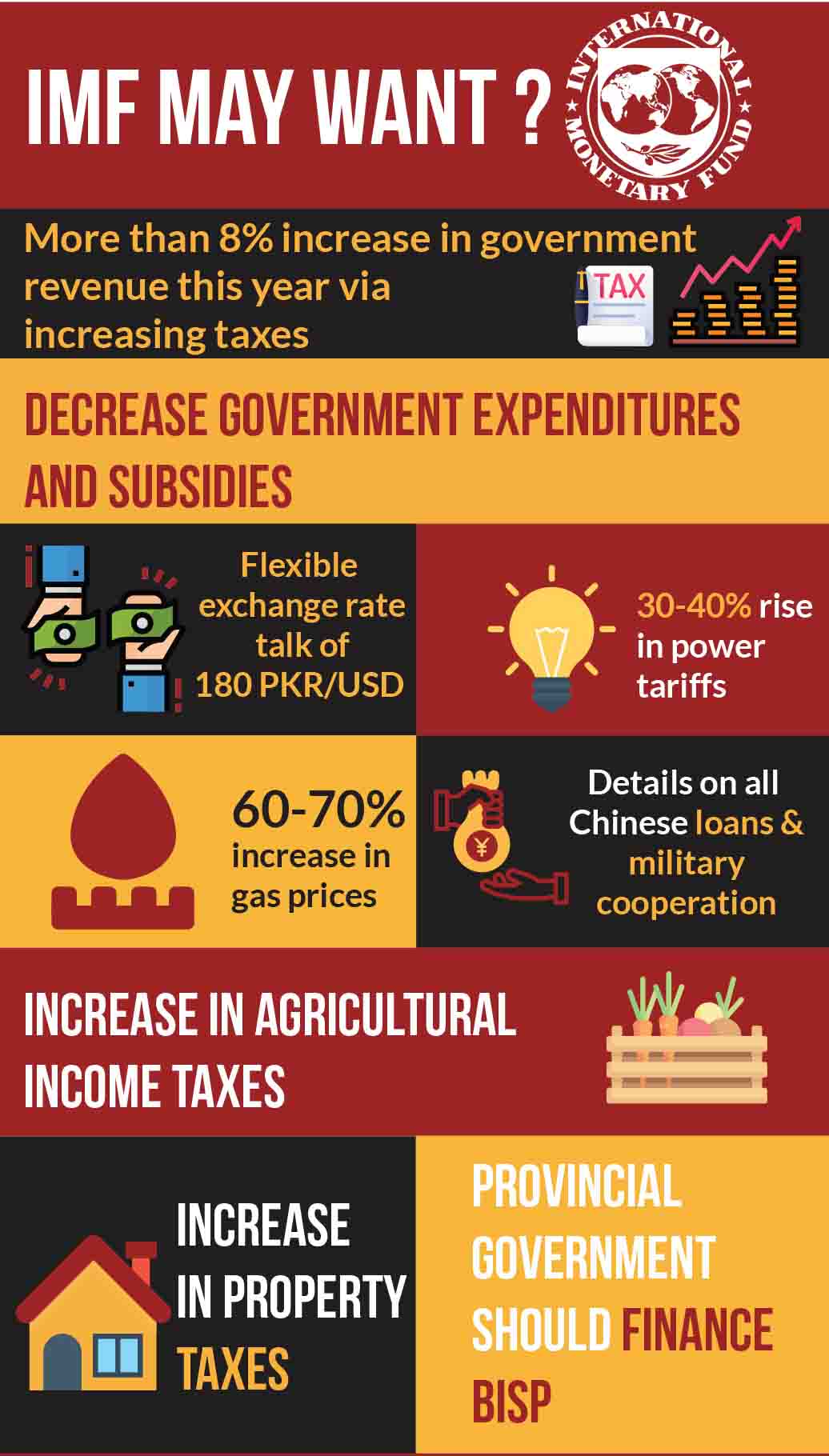 Significant tax has been lost this year on account of (i) tax breaks given by Abbasi Government, (ii) Supreme Court order against telecom taxes (which, mercifully, the Court withdrew last week) and (iii) less than full recovery of taxes from petroleum prices. Eliminating these leakages would be low hanging fruits to plug the hole in the tax system. The work on the expenditures’ side would be no less challenging.

Pakistan and the IMF on a new program, and the recent change of guards at the Ministry of Finance should not affect at this point the pace of implementation.

An aggressive approach to review all expenditures for their continued utility would be needed to achieve a meaningful reduction in expenditures. Subsidies of all types will have to be significantly reduced from energy products, railways, utility stores, fertilizers, and those given to exporters. In this regard, it is hoped that the PM’s Committee on Austerity would finalize its recommendations to guide this process.

On the other hand, any further increase in interest rates would have adverse implications for expenditures. The government borrowings from SBP as on 20 April were Rs.6.6 trillion, which is way above the prudential limit and is, in fact, indicative of near break-down of money and bond markets in the country. There has been a sustained deleveraging from commercial banks in their holdings of government paper. Except for some recent moves to auction government bonds, government debt has become confined to the shortest maturities in treasury bills.

Read more: Pakistan With or Without the IMF?

The Fund program would require a significant reduction in SBP financing, and that too steeply. This would have implications for interest cost to the budget. To minimize this, as soon as the Fund program is in place, the government should look for issuing bonds internationally as this would reduce SBP debt without disrupting domestic debt market. The most serious issue requiring resolution with the Fund would be the adjustment in administrative prices of gas and electricity. 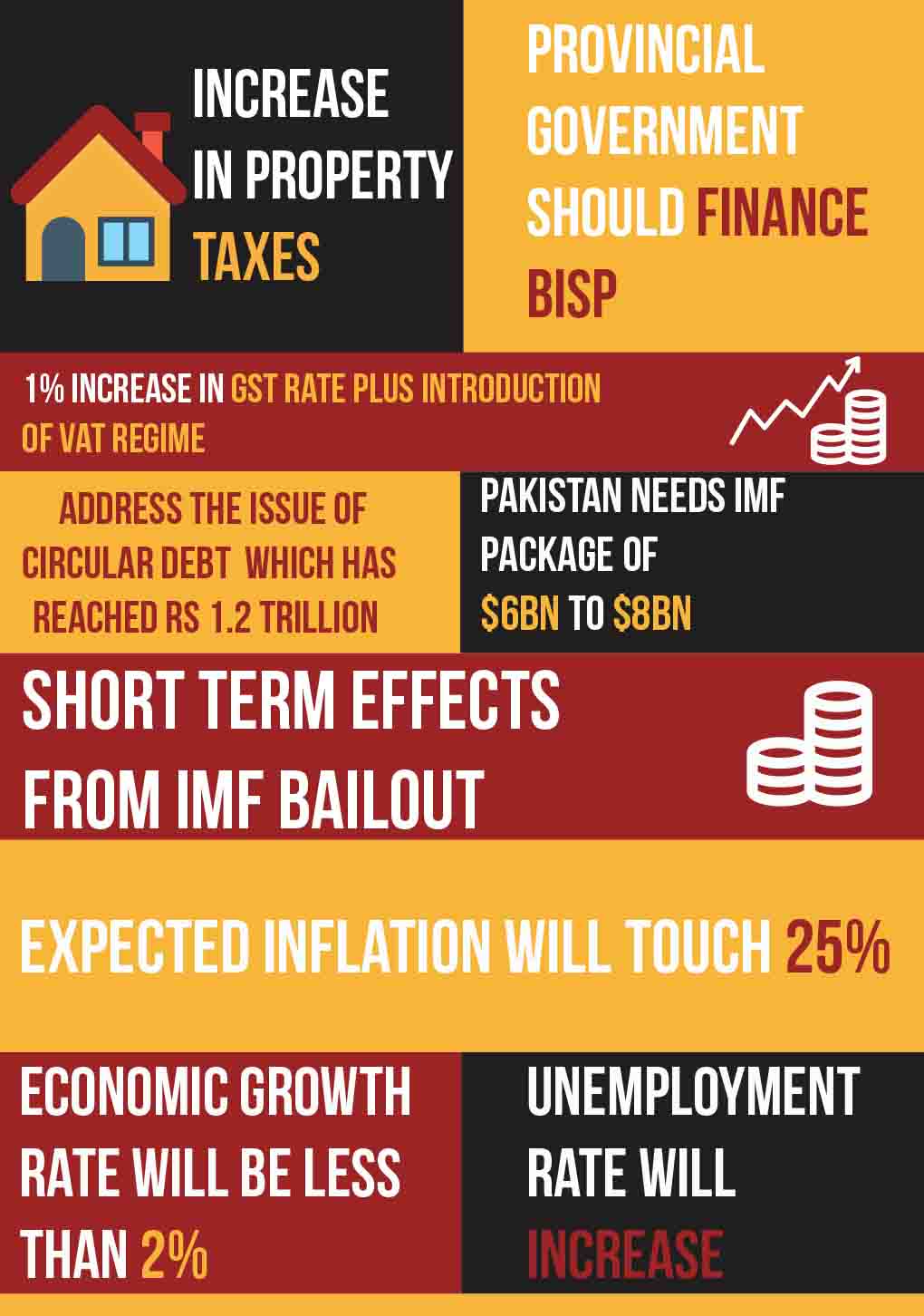 The Fund will expect that the government should get out of the business of interfering in setting prices after the regulator has done so through a statutory process. This would be painful, undoubtedly, but will help set the fiscal house in order. Settlement of circular debt would be a must under the program. Since the time the Fund saw it last in September 2016, circular debt has more than doubled.

The first condition of the Fund program would be to cut the budget deficit to no more than 5pc of GDP in the first year of the program.

At the time, the Fund was given a settlement plan that depended on two elements: (i) no further accumulation through appropriate tariff adjustments, efficiency gain and loss reduction; and, (ii) privatization of Discos and Gencos to raise money for the eventual retirement of debts. 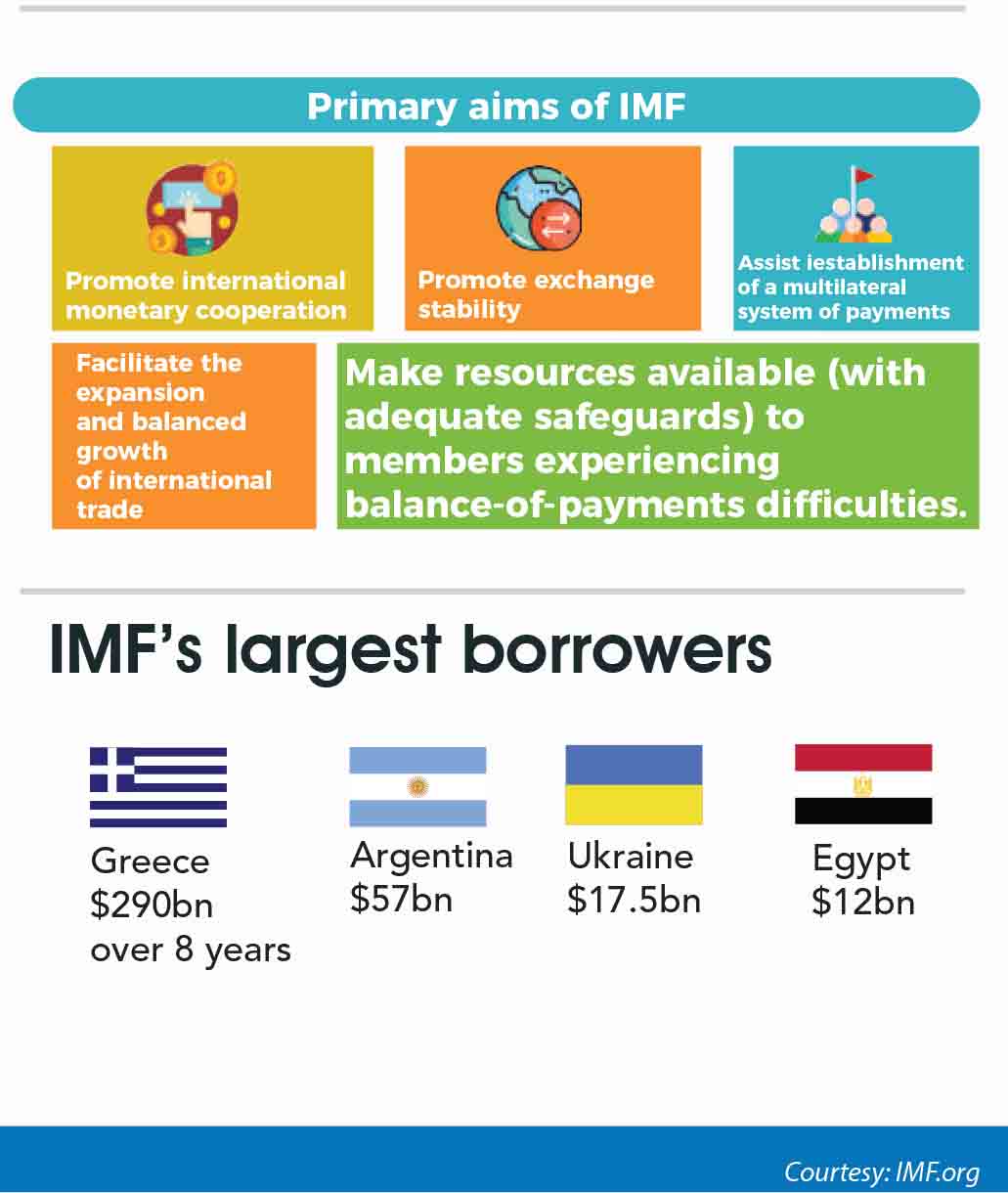 Apart from falling significantly short in tariff adjustments, this government has shown a general aversion toward privatization. More significantly, the government has resorted to issuing domestic sukuks based on securitization of the assets of the Discos and Gencos, which may pose a new challenge for future privatization efforts so long as these sukuks are outstanding.

This has been the case going by the history of debts parked in the power holding company, which are routinely rescheduled. Under the circumstances, the old approach would neither inspire confidence nor help prevent the continuing hemorrhaging of the sector and potential costs to the budget. The subject of privatization will also feature as a key point of negotiations in the context of reforms in PSEs.

The Fund will insist on bringing the costs of running PSEs into the budget so that an accurate picture of governments footprint in the economy is accounted for. The privatization program is the most desirable solution against continuing losses from PSEs’ operations.

The new finance minister Hafiz Shaikh would likely have a different perspective on this subject. He has been a former privatization minister (2003-06) and acutely aware of the necessity to divest PSEs as their cost to the budget as well as to the economy, from inefficiencies and politicization of economic issues, are very high.

Why Pakistan should go for Maximum Assistance

Given the significance of the program, Pakistan should seek the maximum possible assistance, which could be as high as 500 percent of Pakistan’s Quota (about $15 billion). Former finance minister Asad Umar had indicated the government wanted between $6-$8 billion; however, this would not have the necessary push needed at this critical juncture. On top of this, support from ADB and World Bank in the form of policy loans, which could be at least $10 billion over a three period, would further help build reserves.

The Fund will expect that the government should get out of the business of interfering in setting prices after the regulator has done so through a statutory process.

Finally, the country would be able to access the international capital market, through Euro Bonds and Sukuk, when a successfully running Fund program is in place. Our need is to continue to refinance the existing bonds as they are maturing and also, if needed, to seek new loans. There is no doubt that the Fund program would be painful, both for the government and the public. The pain is coming from a reduction in growth, due to reduced demand, while according to IMF inflation would accelerate on the back of reduced supplies.

Moreover, there may be further needed in adjustments in the exchange rate and interest rates. However, as soon as the Fund program is signed, there would be order in the markets, particularly in the forex market, bleeding of reserves would stop, investors’ confidence would be restored, and the process of investment would resume, especially foreign investment. Ease of doing business should be a significant focus of government policy. In the second year, growth may begin to pick up as well. However, the continuing surge in international oil prices could lengthen the period of stabilization.

Dr. Waqar Masood Khan has served as Federal Secretary for the Finance ministry. He has also been the Special Secretary to the Prime Minister, Secretary Finance Division, Secretary Economic Affairs Division, Secretary Petroleum & Natural Resources and Secretary Textile Industry. He has served on the Boards of national and international institutions, including National Bank of Pakistan, Pakistan International Airlines, PTCL, Islamic Development Bank, and Pak-Oman Investment Company. He has done Ph.D in Economics and M.A. in Political Economy from Boston University Massachusetts, USA, and has done M.A. in Economics and L.L.B. from University of Karachi.

Banking Sector of Pakistan on 75th Anniversary of Nation: A Snapshot

Caught in the debt trap