Fatemeh Aman is a non-resident Senior Fellow with the Atlantic Council’s South Asia Center, Washington D.C. A political analyst who has been writing on Iran, Afghanistan and South Asia for over 17 years.

GVS: What was your perception about Pakistan before your trip?

Fatemeh Aman: I had a negative perception of Pakistan which is now embarrassing to admit. Why embarrassing? Because those perceptions are not from an ordinary person, who has never been to the south Asian region but from somebody, who writes about the area.

Pakistan is associated with extremism, hostage-taking, killing of journalists, of stoning, gang rape as a punishment, atomic bomb, and of having been through four wars with India. Then there is Malala Yousafzai, a sympathetic young woman who was almost killed by the Taliban due to her desire to educate herself.

She insisted that I introduce myself as German, not American, especially to those whom I meet for the first time! Later in Murree, near Islamabad, when the shopkeeper didn’t charge me for my breakfast because I was an American, I thought of this friend and smiled.

As I was coming to Pakistan, at Istanbul airport, before catching a connecting flight to Karachi, I went to a washroom and changed my short shirt and slipped into a long dress with pants. The hemline went all the way to my knees. I do have Pakistani friends who visit me when they come to Washington.

However, I thought to myself, well, you’re going to Pakistan, and it will be different from my interaction with Pakistanis who visited me in Washington. They are free to wear whatever they feel like, but it may not be the case in Pakistan. I generally try to dress the way locals do.

On my flight, I reluctantly spoke to other passengers, as I didn’t want to tell anybody I was from the U.S. Things changed, of course, once I arrived in Karachi. A friend picked me up at the airport and drove me to his and his wife’s beautiful house. I immediately felt at home but, still, thought to myself, these are the elite. Their lifestyle must be an exception and unlike the rest of Pakistan.

GVS: Tell us about the places you have visited so far and which one did you enjoy the most?

Fatemeh Aman: From Karachi, I flew to Islamabad, and also went to Taxila, Murree, and Peshawar. Unfortunately, I was not able to visit Lahore on this trip, since I was short on time. I truly enjoyed the places and my interaction with the people. Pakistanis are very hospitable and kind to foreigners and guests.

GVS: Did you feel safe?

Fatemeh Aman: Yes. I am generally very cautious and always try to blend in. I always try to be very respectful to the customs and traditions of the places I travel. Regarding safety, Peshawar was a unique place. That was a place where a suicide bombing killed more than 150 students in 2014.

I didn’t even tell my family in the U.S. about my plans to go to Peshawar. I knew the first thing they thought of Peshawar, would be that bombing. I arrived with my driver around 10 am. I wore a Pakistani dress and kept my hair covered.

A friend in Islamabad contacted his friends in Peshawar, and they took me to all the fantastic places such as the Mohabbat Khan mosque, the Peshawar Museum, and old parts of the city. I believe security is a must for tourism, and one of the driving factors behind a flourishing economy.

Terrorist attacks and violence can impact the tourism industry, and unfortunately, this contributes to the black and white picture that people build for themselves. Tourism is the essence of people’s interaction in today’s world and what better way to be more effective than making your guests feel safe.

I believe violence can isolate a country while improving security can lead a nation and an economy to flourish. Pakistan needs to work on its current image. Pakistan is the most under-praised and under-discovered country I have ever been to. There are treasures in this country, and it will be a shame if they remain unknown to the rest of the world.

I think the worst thing that can happen to a country is to be recognized as an extremist country. I truly believe that once Pakistan manages to curb some insurgent groups, and with the help of some necessary PR, it will be inviting encourage more foreigners and tourists to visit the country.

Read more: Set on a Journey of Undefeated Dreams – Interview with APS…

GVS: Do you have a fun story to share from your time in Pakistan?

Fatemeh Aman: Oh, I have plenty of fun stories. However, there’s one that I must share since I feel almost embarrassed about it, as it was due to my ignorance. In Islamabad, I hired a driver who would pick me up in the morning and bring me back from the day’s trip. The first time I met him, it was around, and it was still dark.

I tried to leave the house as quietly as possible so that I wouldn’t wake up my (amazing) hosts. Tiptoeing, I opened the tiny window of the metal house door and saw a white car with a bearded man, standing next to the car. I asked him in English whether he was waiting for me. “Yes, ma’am,” he replied.

He resembled Mullah Omar. Not that I knew Mullah Omar personally, but he looked like the only picture I have seen of him: a skinny face and long black beard. That’s the instance that I described previously as embarrassing.

I didn’t get in the car! I went back to the house and woke up my friends to come to talk to the gentleman and make sure he’s indeed my driver, which they did. The man, Saleem, turned out to be one of the nicest gentlemen anybody can dream of having as a driver: Excellent driver, very respectful, very protective, and very knowledgeable of the area.

It is funny what I thought of him initially just based on his appearance, and it is delightful how my perception changed. In Murree, on a snowy day, I asked my driver to stop, so I can get tea and have breakfast. The shopkeeper didn’t charge me despite my insistence after he found out I was from the U.S.

GVS: You have mentioned you love travelling. What is it about visiting new places that attracts you?

Fatemeh Aman: I love to know about the places that I analyze. South Asia is very close to my heart. I think it’s dangerous if writers/analysts don’t know the regions they write about well enough. By being in the country, you give a face to the blurred images you have about the people you write on. Knowing people, cultures, their likes and dislikes, whom they worship, how they see the world, what kind of misunderstandings and misconceptions they have and so on, is very important to me.

GVS: What other countries have you travelled to? Which one is your favourite so far, and why?

Fatemeh Aman: Oh, I’ve been to many places including India, Afghanistan, East Asia, the MENA region, Europe, and South America. South Asia, obviously because I write about it, is my favorite place.

I rarely stay in the hotels as I believe I can know the people and places better if I interact with them at their homes. The most heartwarming experience I have ever had was to find out that animosities are not between people but between governments.

In India, I have heard from my Indian friends how they love to visit Pakistan, and in Pakistan, I only heard the need for expansion of interaction between Indians and Pakistanis. In Afghanistan, I have met Afghans, educated in Pakistan, who just expressed positive feelings toward Pakistanis. Some described Pakistan as their second home.

GVS: What has been your favourite memory from the trip so far?

Fatemeh Aman: I have so many great memories; it’s hard to place any of them as the most favourite. I went to a party with my friends in Karachi. The beautiful female host greeted me in amazing Persian.

It turned out her family was originally from Shiraz, the city where I come from! We talked in Persian most of the time that I was in her house. I also met so many incredible people some of whom, I believe, will stay my friends forever.

One amazing person I met and truly enjoyed her presence was Ms. Zeenat Mirza, daughter of the first president of Pakistan, Major General Iskandar Mirza, and Begum Riffat Mirza. “Aunty,” as I ended up calling her, is an elegant lady in her 80s and Mashallah extremely sharp. 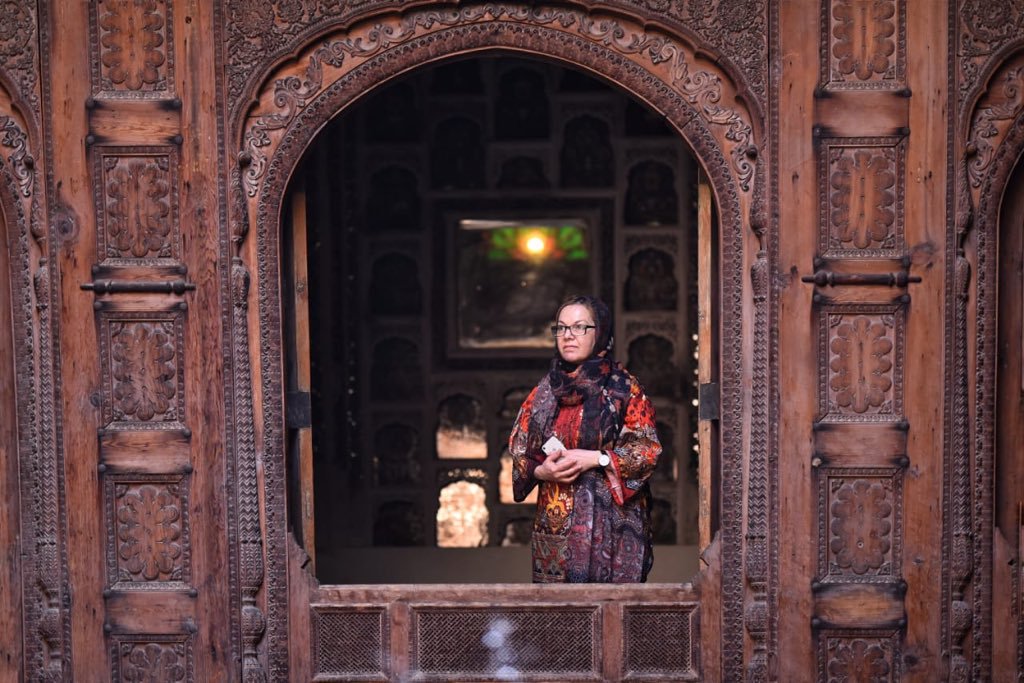 She’s a voracious reader and very kind. I was fascinated by her intelligence, sharpness, and her love for poetry, and she was amazed at my ability to chew paan. Dr. Khawar Mehdi and his incredible and kind wife, Feral (Iskandar Mirza’s granddaughter) were some of the most respectable people I met, and I do not have words to express how hospitable they were.

As you know, I was a guest at the ADAB festival, organised by Ameena Saiyid and Asif Farruki. Meeting tireless Ameena and her family was another wonderful experience. The first time I met Ameena’s husband at their home, Mr Ameer Saiyid, who is a lawyer, he narrated some famous lines from the Persian poetry of Tahirih Qurratul Ayn, that goes:

face to face, cheek to cheek

I’d pour out my heartbreak to you

point by point, line by line.

house by house, door by door, street by street, alley by alley;

all for a glimpse of your face”

I was pleasantly surprised.

GVS: Any other places you would like to visit in Pakistan?

Fatemeh Aman: Oh, there are so many places I need to visit, Lahore, Balochistan, Waziristan, Swat, and Kashmir. I definitely have to come back to Pakistan.

Magazine Desk - February 8, 2021
Since the turn of the century, Pakistan has become a more inward-looking economy. Despite a rapid recovery from the COVID19 shock, a long-term examination...

Decisions 2020: All eyes on Beijing

Pakistan Towards 2030 – Desperate need for legal and judicial reforms

Challenges of ‘Made in Pakistan’

Et tu, Brute? Senate: Where it came from?

Why or why not an ‘open ballot’: Insights by experts Senate Elections 2021

Why Jadhav became so important for India? – Dr Moeed Pirzada

Reincarnation of India: Threat to Peace?